Happy Chinese New Year for all celebrating!  As a special tribute, this post will focus on the fact that all 5 commodities that start with the letter “c” (the same letter China starts with) in the S&P GSCI Agriculture and Livestock have had positive returns in 2014.  I picked the agriculture and livestock to symbolize the importance of food for the year.  Further to honor the new year, I will specifically highlight how China has influenced each of these commodities.

Let’s start with a general cumulative performance chart (and notice the special celebration colors of red and gold for extra luck!) of each of the commodities that start with the letter “C” that are in the agriculture and livestock sector.  Based on monthly returns from 2002, the last year of the horse, cocoa and cattle (two of my favorite commodities) performed well, returning 82.7% and 3.6%, respectively.  Unfortunately, coffee, corn and cotton were less fortunate and lost 38.5, 31.2 and 21.2%, respectively. 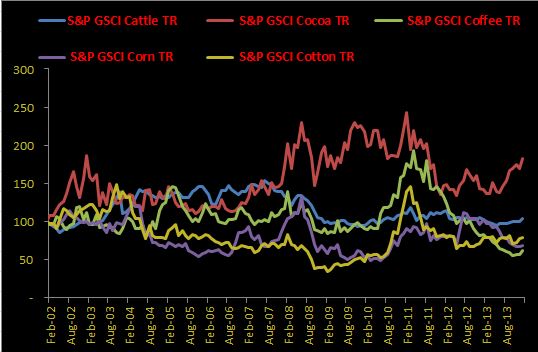 Source: S&P Dow Jones Indices. Data from Feb 2002 to Jan 2014. Past performance is not an indication of future results. This chart reflects hypothetical historical performance. Please see the Performance Disclosure at the end of this document for more information regarding the inherent limitations associated with backtested performance.

Under which signs were food commodities that start with “c” most successful?  The last year of the horse did very well, returning on average 26.3% with a stellar cocoa performance of 86%.  In fact, the only sign that had better average performance was the TIger. (That’s my sign so is probably why I’m a commodity lady!) Check out the table below to see performance in the last cycle by sign: 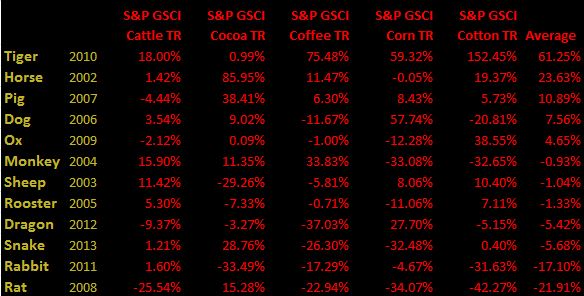 Source: S&P Dow Jones Indices. Data from Feb 2002 to Jan 2014. Past performance is not an indication of future results. This chart reflects hypothetical historical performance. Please see the Performance Disclosure at the end of this document for more information regarding the inherent limitations associated with backtested performance. Also please note the years in the table are not exact calendar years but coincide with the Chinese calendar months.

Hopefully the year of the horse will be prosperous again and bring happiness and health.  Given Chinese demand growth is one of the major influences on commodities, I thought it would be appropriate to touch on how China affects each of these commodities.

Coffee: Coffee is up 8.4% YTD; Consumption of coffee in China is expected to grow by an annual rate of 9% for the next five years. This is not only from China’s large population but it’s rising middle class, which is expected to grow to 630 million people from 230 million.  Additionally, dry weather in Brazil has supported coffee returns this year. In the past 30 days, rain was as much as 50 percent below average, according to a US based weather group.

Cocoa: Cocoa is up 7.5% YTD; Although the average Chinese consumer only consumes one chocolate bar per year, which is relatively low compared to the 11 bars per year consumed by the average Japanese consumer and 82 bars per year by German consumers. (And 365 bars per year by me.) However, according to KPMG, China’s chocolate sales have increased 40% from 2009 to 2012. As the middle class continues to grow and demand higher quality chocolate, the supply shortage of cocoa butter continues to persist, driving up the price of cocoa.  For a deeper analysis on cocoa, please see this prior post.

Cattle: Cattle is up 3.6% YTD; According to the National Development and Reform Commission (NDRC), per capita beef consumption in China will increase 0.32kg to 5.19kg per year between 2011 and 2015. This is mainly for the same reasons as the increase in demand for coffee and cocoa, which are from the rise in the middle class of China.  As incomes grow, the people like to try new things that may have been unattainable before the new-found wealth. Further supporting the price of beef is the supply shortages that are occurring for various reasons like weather.

Corn: Corn is up 2.7% YTD; however, most of the upside has come from weather shocks in Brazil that is increasing the crop stress for corn, though may be more favorable for soybeans. Also, U.S. sales have increased despite the big news from China of the ban on the GMO variety of corn.  According to a report by Xinhua, China has rejected 601,000 metric tons of US corn, containing the unapproved genetically modified MIR 162 substance.

Cotton: Cotton is up 1.6% YTD; China has a major influence on the cotton price.  Most of the question about how price will be impacted comes from the stockpiling situation by the Chinese government.  They have announced the stockpiling program will end, which may be bearish, though it is possible production could be cut based on this news, which would possibly be bullish. China’s Cotton Association predicts 2014 China cotton production will fall 5%-10% as cotton planting drops 9% this year to 9.9 million acres after farmers cut cotton plantings in favor of more profitable crops.