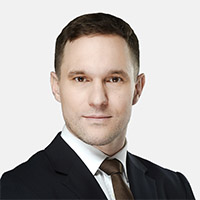 Although higher rates are generally seen as negative for risk assets, the initial stages of a monetary tightening cycle have not been disastrous for the U.S. stock market historically. However, while the overall market may muddle through just fine, the same may not be true for the different sectors and factors that compose a broad benchmark like the S&P 500®.

The stretch of history for which we have full data on the S&P 500’s various GICS® sectors and factor indices is around three decades long. However, the rate cycle moves slowly, with only four occasions of “liftoff” since 1994. We are presented not so much with a sample as a series of case studies. Nonetheless, history suggests a few top-level conclusions that sector- and factor-based equity investors might draw.

Turning first to sectors, Exhibit 1 shows the average excess returns of S&P 500 sectors in years when a rate hike cycle started and in other years. 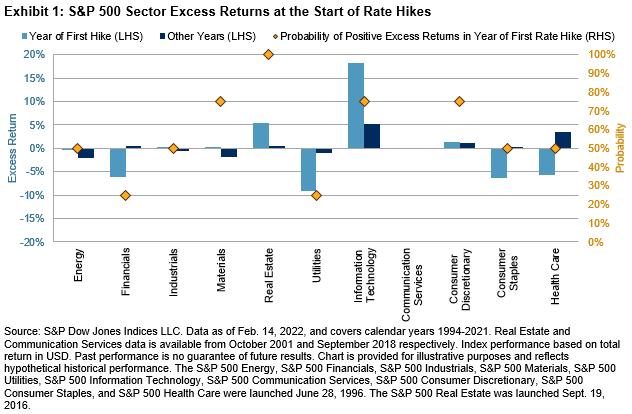 Exhibit 1 suggests three distinct clusters of sectors based on their historical reaction to rate hikes.

Turning to factors, Exhibit 2 shows the average excess returns of S&P 500 factors in years when a rate hike cycle started and in other years. 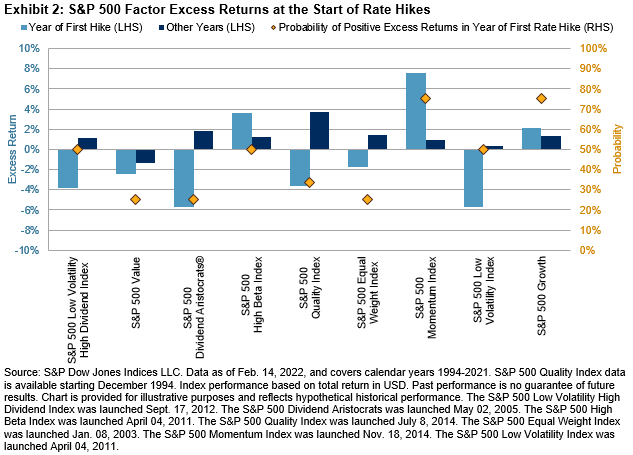 In the case of factors, the “rate hike agnostic” group appears to be lacking in representatives, so we divide it into just two cohorts.

The overall takeaway from our analysis is that for both sectors and factors, the fact of a rate hike often played second fiddle to exogenous forces, such as a speculative bubble in dot-com stocks. While the Federal Open Market Committee’s activities are no doubt of importance to the relative returns of factors and sectors, an excessive focus on monetary policy at the expense of the broader economic and market environment could lead market participants astray when appraising prospects for the year ahead. 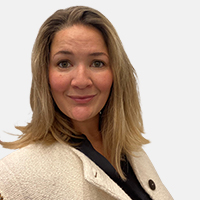 The theme of International Women’s Day 2022 is #breakthebias, pushing for organizations to be equitable and inclusive places of work for all. This aligns with our belief at S&P Global that an inclusive economy is one where women can fully participate in the global economy. The positive correlation between gender diversity in the workplace and corporate performance is undeniable—female representation has shown to enhance performance metrics while improving economic productivity and reducing volatility.1 Yet women remain largely underrepresented in the workforce, often due to social discrimination, lack of incentives or antiquated corporate provisions. This can result in negative financial consequences for internal and external stakeholders. Equally, strong gender and diversity integration creates an investment opportunity. The S&P Developed 100 Gender and Diversity Index seeks to track 100 developed market companies that are committed to creating a diverse and inclusive workplace free from bias and discrimination.

The Black Lives Matter and #metoo movements of 2020 have driven global attention toward inclusion and diversity in the workforce. Consequently, more corporations are disclosing these metrics. With increased disclosure, investors gain better insight into the divergence of female representation across sectors and regions, with popular metrics such as women on the board still showing that women remain grossly underrepresented across business. 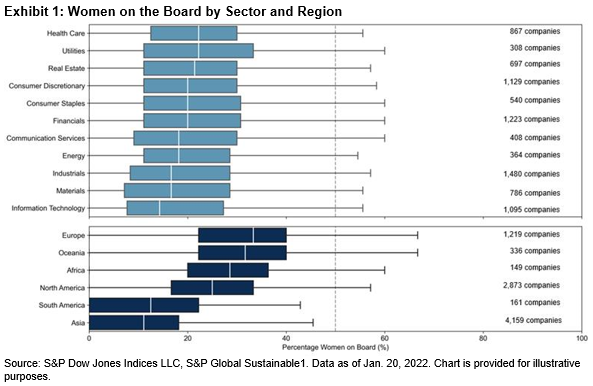 Diversity Metrics Have Low Correlation, so Granular Data Is Essential

Promoting equality in the workplace is about more than having a policy in place. It is about creating a culture where difference is valued and bias is halted. To achieve long-term shareholder value, investors need to determine a company’s true performance across numerous indicators. This is because gender and diversity metrics have low correlation, so you need to gain insight by looking beyond the policy. Having a policy in place does not mean you have created a culture where women are integrated and accepted throughout the corporate ladder. 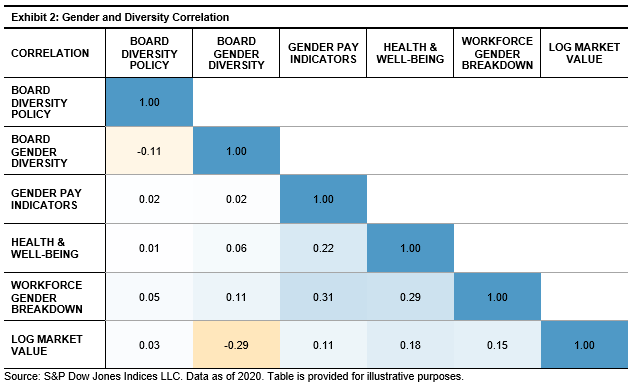 To understand corporate culture toward inclusion and diversity, you need to aggregate multiple sources of granular data. Leveraging the S&P Global Corporate Sustainability Assessment, the S&P DJI ESG Scores can measure company commitment to gender equality using several frameworks such as board diversity, board gender diversity, workforce gender breakdown, gender pay indicators and health and well-being. This holistic insight into a company’s values and their actions can help us calculate company performance on gender equality and create a transparent and simple scoring approach to use as the basis of our index methodology.

International Women’s Day is not just about women’s equality, it is about creating a society where diversity is accepted and building a sustainable future where no one is left behind. The S&P Developed 100 Gender and Diversity Index strives to track those companies that embody these values and are committed to diversity at all levels. As we look to #breakthebias in 2022, I am reminded of a quote from Gloria Steinem.

“The story of women’s struggle for equality belongs to no single feminist nor to any one organization but to the collective efforts of all who care about human rights.”

The Shift to Passive

Investing styles and strategies are adapting to the new market, economic, and political dynamics that are compelling portfolio managers to review their objectives and goals. The growth in passive adoption is evident, with global assets under management having surpassed USD10 trillion and over 9,800 products as of December 2021.3 India also experienced a significant shift from being almost a purely active market, with minimal concentrated passive interest, to a boom in passive assets and number of passive products. With assets exceeding USD 50 billion and over 100 products,4 India’s growth in passive investment has ushered in new investor interest for diverse offerings.

The Active versus Passive Debate – Tilting the Scales

The debate of active versus passive has been ongoing. The recurring feature of benchmark outperformance is contributing to the adoption and growth of the passive investment space.

The S&P Indices Versus Active (SPIVA®) scorecard, which reflects on the trends of active fund management vis à vis benchmarks, has been a testament to the argument favoring indexing, as the statistics seem to tilt the balance in its favor. According to our SPIVA India Mid-Year 2021 Scorecard, over 86% of active Indian equity large-cap managers were beaten by the S&P BSE 100 over the previous 12-month period, and the numbers were similar for a three- or five-year horizon, with underperformance rates of 87% and 83%, respectively (see Exhibits 1 and 2). The index outperformance in large caps has been a recurring feature over the past few years. A new trend for the mid-/small-cap segment was a surprise for the market. Over the one-year period, 57% of active fund managers underperformed the S&P BSE 400 MidSmallCap Index, and the number was as high as 69% over the five-year horizon. This marks the beginning of opportunities for passive funds in this segment for India. 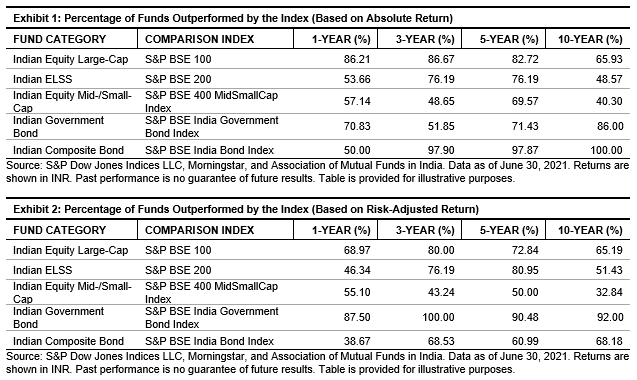 In a market that has had participants and product providers showcasing alpha in active portfolios for a long time, there is beginning to be an increased awareness on the merits of including indexing in investment strategies.

These SPIVA results are not unique to India, as similar results have been reflected over the one-year period across the SPIVA scorecards. Besides India, SPIVA is also published across another 10 markets, namely the U.S., Canada, Mexico, Brazil, Chile, Europe, MENA, South Africa, Japan, and Australia. 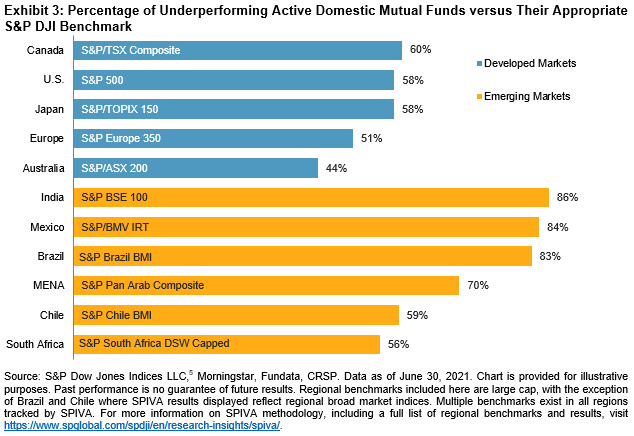 Which of the figures in Exhibit 1 belong together?

Even if puzzles aren’t your strong suit, it’s not hard to observe that A and C are similar, as are B and D. A and C are not like B and D.

Exhibit 1’s puzzle is rooted in recent economic news, specifically in the consensus view that high inflation will lead to a sustained rise in interest rates. Whenever the prospect of rising rates looms, there is understandable concern over the reaction of the equity market. Conventional wisdom has been that rising interest rates should be bad for the stock market. But recent history has shown that that’s not necessarily the case. From 1991 through 2021, there have been 156 months when the 10-Year U.S. Treasury Yield rose. Of these, the S&P 500® gained in 115 (74%) of the months and declined in 41—i.e., in a rising rate environment, the market was more than twice as likely to do well as badly. The common belief that there is an inverse relationship between interest rates and equity market performance is no longer a sure thing.

By extension, the question of rising rates’ impact on factor indices also arises. Circling back to Exhibit 1, here’s the same graph, this time with some labels.

For strategies that are explicitly risk attenuators (like Low Volatility) or risk amplifiers (like High Beta), the condition of the equity market is much more important than the state of the bond market. For example, Low Volatility tends to outperform in bad markets while lagging in good markets, and High Beta tends to exhibit the opposite pattern of returns, regardless of whether interest rates are rising or falling.

Military and economic warfare rocked the financial markets in late February. Beyond the unthinkable human impact, the Russia-Ukraine conflict has had sizeable short- and long-term implications for commodities markets.

The S&P GSCI ended the month up 8.8%, driven higher by fears over the continuity of energy supplies in Europe, the dominance of Russia as a supplier of key industrial metals, the shutdown of international transport routes, and the importance of the region in global grain markets.

The raft of new economic sanctions, as well as announcements by major oil and gas multinationals that they will exit Russian operations and joint ventures, were sufficient to push Brent Crude Oil past the USD 100 per barrel level for the first time in seven years by the end of the month. Plans for a coordinated global crude stocks release did little to temper market sentiment. The S&P GSCI Energy rose 9.7% over the month. Longer term, the conflict has laid bare Europe’s dependence on Russian energy supplies and could hasten the shift to alternative supplies, both conventional and renewable. The energy complex may remain volatile, as the risk of losing access to Russian supplies hangs over the global economy.

In addition to energy, Russia is a major player in several energy transition metals. The S&P GSCI Industrial Metals jumped 7.3% in February, with aluminium touching a record high. Many of the metals markets have continued to be characterized by lingering COVID-19-related supply chain challenges, along with strong demand, and the restrictions on Russian raw materials have already had a cumulative impact on availability. The S&P GSCI Nickel rose 9.0% over the month. While the electric vehicle (EV) sector is a smaller user of nickel than stainless steel, the exponential rise in EV adoption has had a notable pull on nickel stocks.

Gold has been the laggard in the commodities complex for much of the past year, but it saw a resurgence in demand as a safe haven asset during the final days of February. The S&P GSCI Gold gained 5.8% over the month. Gold has historically performed strongly during periods of crisis but in the current ongoing tailwinds from central bank purchases, inflation expectations, and its role as the asset of last resort may be tempered by tightening monetary policy and competition from alternatives such as cryptocurrencies.

For the second month running, the S&P GSCI Palladium was one of the best performers across the commodity complex, taking the YTD return to up 30.9%. Russia is the world’s largest producer of palladium, which is an essential component in catalytic converters.

The S&P GSCI Agriculture ended the month 10.8% higher. Often referred to as the breadbasket of Europe, Ukraine accounts for 16% and 12% of global corn and wheat exports, respectively, while top wheat supplier Russia is responsible for 17% of global trade. With ports closed, the movement of commercial vessels restricted, and a raft of economic sanctions imposed on Russia, the disruption and dislocation of global grain markets has already been significant.