While the iconic S&P 500® is one of the world’s best known benchmarks, the S&P Composite 1500 (comprising the S&P 500, S&P MidCap 400®, and S&P SmallCap 600®) covers a broader spectrum of the capitalization of the U.S. equity market. Though the S&P 500 is often used as a measuring stick for large-cap fund performance (and rightly so), the S&P Composite 1500 can be a more appropriate benchmark for funds that are not limited to large-cap stocks.

Our SPIVA scorecards measure the performance of active funds against an appropriate passive benchmark. The S&P Composite 1500’s wider capitalization range makes it an appropriate benchmark for multi cap funds as well as all general domestic funds. In both cases, fund managers underperformed the S&P Composite 1500 in 12 of the 18 years observed—and things have looked particularly bleak in each of the last five years. While 2019 results are not available yet, based on market dynamics, we’d expect the average active manager to underperform again.

In 2019, U.S. equities posted double digit gains, with the S&P 500® returning 31.49%—its best year since 2013 and second-best in a decade. This continued strong performance highlights the potential difficulty of beating the S&P 500.[1] The question then arises: what strategy (if any) outperformed the S&P 500 in 2019?

We focus on quality—the second-best-performing factor—in this blog. High beta, by definition, tends to deliver higher returns than the broad market in a bullish environment. Because of this, its standing as the best-performing factor in 2019 comes as no surprise. Quality, on the other hand, is a frequently debated factor for which definitions can vary greatly and performance can be cyclical.[2] Therefore, its outperformance in 2019 merits additional insight and analysis. 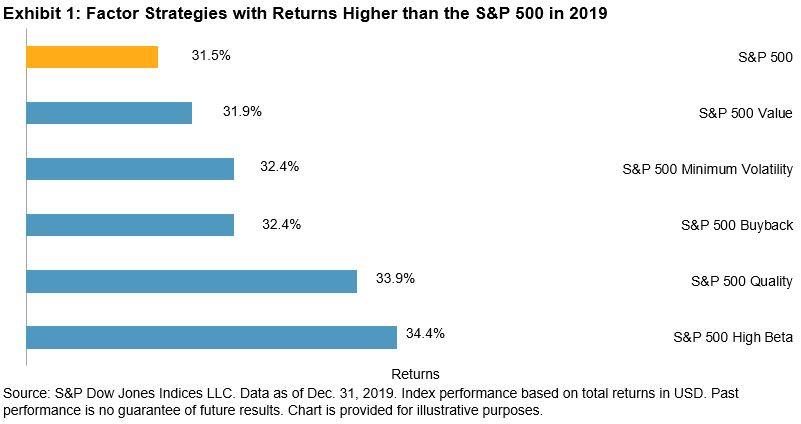 Given that the S&P 500 High Quality Index comprises three fundamental ratios, we sought to understand which ratio contributed the most to the index returns. Exhibit 2 shows the performance of each of the underlying ratios—ROE, accruals, and debt-to-equity—in 2019.

The market rewarded profitable companies handsomely in 2019. ROE was the best-performing ratio of the three (38.2%), followed by accruals (29.8%), and then leverage (28.1%). In fact, the portfolio of the highest ROE companies outperformed the S&P 500 by nearly 670 bps.

Given quality’s performance against the S&P 500 in 2019, we wanted to dig deeper into multi-factor strategies that incorporate elements of quality in their index construction. For instance, the S&P 500 GARP Index—which combines growth, value, and quality scores to arrive at a portfolio of 75 growth securities with relatively high earnings quality and reasonable valuations—kept pace with the S&P 500 in 2019, returning 31.5%. On the other hand, the S&P 500 Quality, Value & Momentum Multi-Factor Index lagged the S&P 500 and returned 26.2%. The index’s underperformance is partly driven by exposure to the momentum factor (26.25%), which returned less than the broad market in 2019. 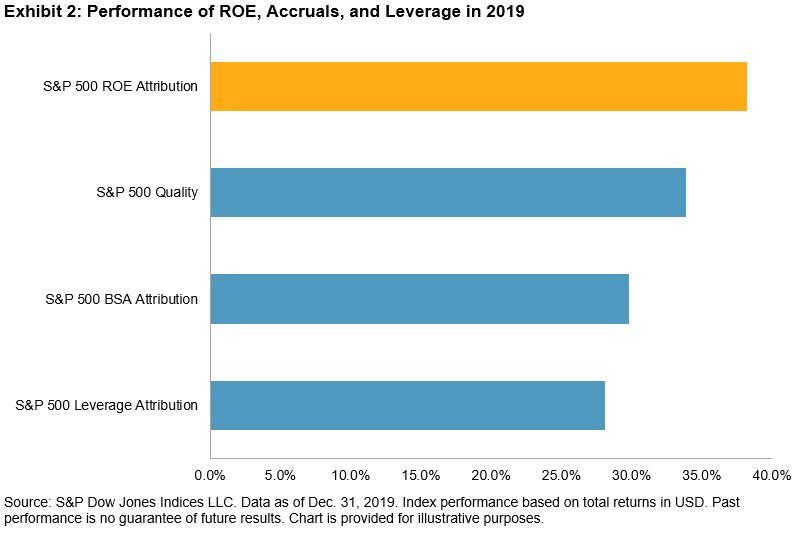 In sum, 2019 was a strong year for domestic equities. The S&P 500, a market barometer for large-cap U.S. equities, posted its second-best year in a decade. Quality was one of the few factors that managed to deliver higher returns than the S&P 500. Upon deeper examination, we found that profitability was the biggest return contributor to the quality factor, posting significantly higher returns than the S&P 500. While it may seem like 2019 was a difficult period to beat the S&P 500, our blog highlights that passive factor strategies with exposure to quality performed even better than the S&P 500 in 2019.

SPIVA®, which stands for S&P Indices versus Active, reports on the performance of actively managed funds against their respective category benchmarks, such as the S&P 500® in the U.S. and the S&P/BMV IPC here in Mexico. The results are impressive and consistent across the world: indices tend to outperform the majority of actively managed funds, mainly over the over the mid- to long-term investment horizons.

The SPIVA Latin America Mid-Year 2019 Scorecard showed that over the one-year period ending on June 30, 2019, 64% of actively managed funds in Mexico underperformed the S&P/BMV IRT, the total return version of the flagship S&P/BMV IPC. In addition, the percentage of active funds underperforming the benchmark increased over longer-term investment horizons; 82%, 90%, and 86% of active managers were not able to beat their benchmark over the 3-, 5-, and 10-year horizons, respectively. One should notice that active fund managers do not always lag the benchmarks, especially over the short-term horizons. A clear example was in the year-end 2018 report, when more than 58% of Mexican active funds outperformed the S&P/BMV IRT. The numbers suggest that active managers’ outperformance relative to the benchmark may exist, but rarely.

Furthermore, it is challenging for managers to consistently remain at the top of their categories, especially over longer horizons. The Latin America Persistence Scorecard demonstrates that top-performing active funds have little chance of repeating that success in subsequent years.

The SPIVA report does not intend to explain why underperformance exists, rather it is meant to act as a scorekeeper. That said, we could argue that many active managers do not have the skill to beat their benchmarks consistently that they may claim to have. It is difficult to time the market with consistent success, and the trading costs associated with excessive trading from active managers does not help fund performance. Furthermore, SPIVA uses net-of-fees returns of active funds, and numerous studies[1] show that the fee drag in fund returns can be substantial.

SPIVA can help investors make informed decisions about whether to use an active manager or invest in an index-based fund such as an ETF. It also reminds investors that using past performance as the main guidance in fund selection could be misleading due to the lack of performance persistence among actively managed equity funds.

This article was first published in Fortune Mexico Magazine December 2019.