The stunning statistics on rising college tuition shown in Getting Smarter About Saving For College: Part 1 have led to a need for better ways to save for college.  To meet this demand, S&P Dow Jones Indices launched a new index based on research showing how tuition inflation is dependent on general inflation (linked bonds), stocks and corporate bonds.   The rationale is published in the second section of our paper summarized below:

THE THEORY BEHIND THE INDEX CONSTRUCTION
The first step in designing an index to track college tuition inflation over time is to understand how college tuition is set. Colleges are producing a product just like any other business, but the product is education. Just as in any business, they have expenses and revenues, so understanding what is driving those expenses and revenues is an important part of  understanding how to build such an index.

On the expense side, colleges have mostly labor costs, but they have a number of other things that go into creating the educational product.  According to American Institutes for Research (AIR), “More than one-half of total average spending by private research universities was dedicated to E&R [education and related spending] functions, and at private nonresearch colleges, E&R accounted for approximately 80 percent of total expenditures.” Collectively, those costs rise with general inflation, for example, the report shows that in 2013, E&R spending per full-time equivalent student increased an average of 2%-3% at public four-year institutions in 2013.

Generally, there is an inverse relationship between tuition increases and funding by appropriations and endowments, where the health of the latter may be driven by investment performance. “Endowments are managed for the long-term to strike a balance between the competing demands of funding current operations and preserving purchasing power to fund future operations…. However, endowments are not immune from market risks. During the Great Recession, endowments lost an average of 3.0 percent from 2007-08 and 18.7 percent from 2008-09.”

One example of the long-term relationship between tuition and appropriation as a percentage of the budget comes from Penn State in Exhibit 4. 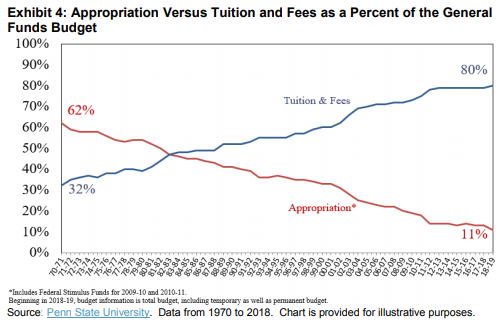 Additionally, the Economics of Education Review found that for every USD 1,000 cut from per-student state and local appropriations, the average student could be expected to pay USD 257 more per year in tuition and fees. Tuition increases can be traced to state budget cuts, has more than doubled since 1987, and remains at its highest level in the post-recession era.  These severe and sustained losses of public funding contributed to the rapid increase in net tuition revenue observed since the recession. 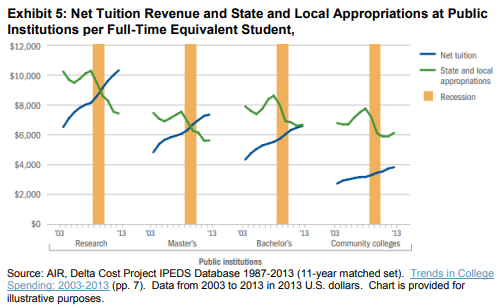 Understanding tuition inflation as a function of general inflation as measured by CPI plus a spread is the beginning of the S&P Target Tuition Inflation Index construction. The spread is a flexible combination of short stocks, long corporate bonds, and cash, based on stock market
performance since there is an inverse relationship between endowment and appropriation performance and tuition inflation. Though allocations varied to U.S. equities of endowments surveyed by the 2017 NACUBO-Commonfund Study of Endowments, and the U.S.-dollar-weighted average was 16%, the smaller endowments allocated over 40% to U.S. equities. While the U.S. equities allocations were smaller in the largest plans, allocations of up to 20% in alternative strategies including long/short equity and 130/30 may also carry a significant amount of equity market risk.  From these relatively large exposures to equities, endowment (and appropriation) performance was largely driven by equity returns. So when the stock market declines, endowments and appropriations suffer, and tuition inflation generally increases to cover the shortfall.

To learn more about the index model development, index methodology and performance results, please see our educational paper, Getting Smarter About Saving For College.