From Crude to Refined: Evolution of Fossil Fuel Free Investing and the 2 Degree Pathway (Part I)

While the yield of the S&P Current 10-Year Japan Sovereign Bond Index continued to hover around zero, the yields of U.S. Treasuries were trending higher this quarter on the back of the rising-interest-rate environment. The historical yield spread of the two indices widened from 1.72% to 2.32% over the past three years (see Exhibit 2).

The yield pick-up offered Japanese investors an incentive to buy U.S. Treasury bonds, which is in addition to the portfolio diversification benefit. Subject to their investment view on the currency, market participants could decide to hedge the currency exposure or not. Either way, they may be exposed to extra returns or a reduction in returns that can result from hedging or the performance of the foreign currency.

Hence, aside from the portfolio diversification benefit and currency exposure, allocating to U.S. Treasuries this year offered better yields and total returns than Japanese sovereign bonds. 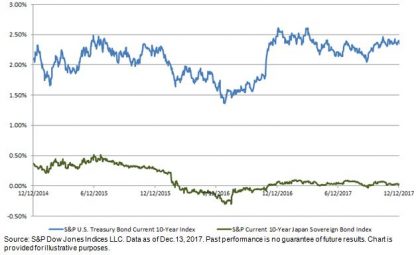 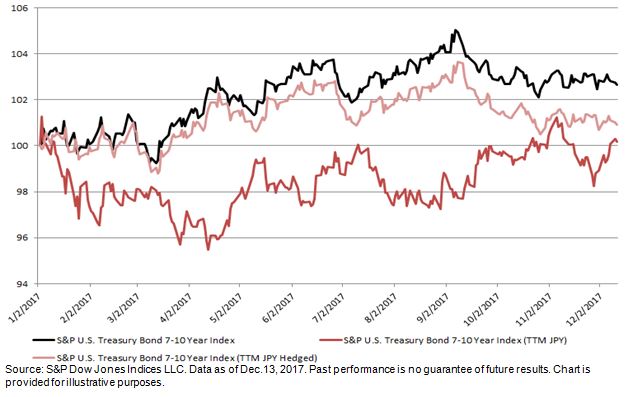 Historically, the sectors of Information Technology (Tech) and Financials have moved in cycles with Tech mostly outperforming since 2008.  In the past 10 years (data ending Dec. 12, 2017,) Tech has outperformed annualized by 8.2% and the outperformance has been solid until last month.  The levels hit their widest spread on Nov. 27, but the spread has started to narrow since then.

With so many stocks in each sector (the broadest of the GICS classification levels) that are classified into different industry groups (the next broadest, followed by industries and sub-industries,) it is interesting to look at how the different groups perform in up and down markets, especially if Tech might take a turn while Financials rally.

There are a total of 31 groups combined in information technology classifications and 24 in financials.  So, for simplicity, the first level down, industry groups, that total 3 in each of these sectors will be mainly discussed.  Across all market cap sizes, it is interesting that the correlation of the Technology Hardware & Equipment remains very high to the Tech Sector regardless of the direction of the returns.  The widest correlation gap between the positive and negative performance happens in mid-caps between a very strong 0.89-0.94, with more correlation during negative months.  This industry group has the highest beta and biggest losses when Tech falls.  On the other hand, Semiconductors & Semiconductor Equipment have significant correlation drops when the performance is split into positive and negative Tech months, and has a low beta, especially in large and mid caps when the market is down. Perhaps the most interesting measure is the smaller losses from Software & Services with losses of 83, 72 and 74 basis points for each 1% monthly drop on average in the respective S&P 500, S&P 400 and S&P 600 Information Technology Sectors. Of all the sub-industries in Information Technology, only Home Entertainment Software in the S&P 400 holds up when the sector falls in a month; it gains on average 19 basis points for the average 5.7% sector loss.

If Financials rise, high correlation, beta and average monthly returns are desirable.  The Diversified Financials Industry Group consistently has the highest average monthly returns when the Financials Sector is up, and the industry group gains more than the sector across every market cap.  While the correlation is only very high in the S&P 500 during positive months, the beta is close to 1 across the sizes but is notably higher in Diversified Financials than Insurance.  Exceptionally performing Sub-Industries when the Finance Sector is positive are the S&P 400-Consumer Finance gaining on average 12.6% monthly with beta of 1.3, S&P 600-Other Diversified Financial Services gaining 6.5% on average, the S&P 600-Insurance Brokers with a positive market beta of 1.3, and in the S&P 500 the sub-industries Regional Banks has beta of 1.4, Multi-Sector Holdings has a beta of 1.8 and Consumer Finance gains 6.5% on average in an up month for Finance.

Overall, while positioning inside sectors can help in a potential turn of performance, sticking with large caps on a broader scale may be most beneficial since Information Technology has lost least on its way down and Financials have gained most on the rise in the whole sector spectrum. 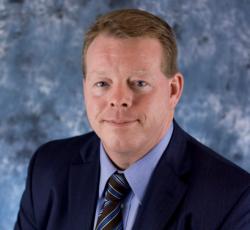 With seventy-five percent of investors reporting an interest in sustainable investing,[1] expertise in sustainable strategies can differentiate and add value to an adviser’s practice by allowing the adviser to better serve clients who wish to see their investments reflect their values or faith. “Sustainable” investing covers a broad spectrum of investment opportunities – from consideration of environmental, social, and governance risks during fundamental analysis, to highly focused impact investing strategies. This breadth allows an adviser ample room to shift his or her advisory relationship away from a price-based, commoditization of products and services toward a more customized, client-focused model.

The Sustainability Smile is a visual tool designed to help advisers discuss sustainable investing with existing and prospective clients. It breaks the broad label of “sustainability” into five strategies and places them along a continuum, providing a framework for client engagements, potential investment strategies, and their respective product offerings. Please note that the positions of the differing strategies and general shape of the smile do not imply any specific investment outcome or predict any particular rate of return.

The Full Spectrum of Sustainable Investing

Familiarizing yourself with the spectrum of sustainable investing strategies will help you prepare for discussions with clients about the values and impact they hope to see in their portfolios – discussions which, in turn, give an adviser the opportunity to connect beyond financial targets and asset allocation. Having the knowledge to accommodate your clients’ values-driven goals will help build your practice in a meaningful way.

This report is intended only for the information of the reader and is not to be used for or considered as an offer or the solicitation of an offer to sell or buy any securities or other financial instruments of any kind, including without limitation, any mutual fund or other product offered, sponsored, created, or managed by Saturna Capital Corporation or its subsidiaries or affiliates (“Saturna”).

From Crude to Refined: Evolution of Fossil Fuel Free Investing and the 2 Degree Pathway (Part I)

The discussions on the merits of carbon awareness investing are evolving and are highlighting a shift from the current data-driven carbon emission framework to a desire to move to a more sophisticated and analysis-driven carbon risk paradigm. Prior discussions would typically cover the scientific arguments regarding climate change and whether existing scientific evidence supported investor action for carbon awareness investing.

Climate change knowledge, policy, and action have now progressed to the point that whether or not one agrees with the concept of climate risk, market participants are accepting the fact that carbon may contain financial risk. The integration of carbon risk can take on a number of approaches, ranging from exclusions based on industry classification to a more complex and holistic approach of aligning investments with the 2 degree alignment pathway. Many market participants are realizing that they must think about incorporating some form of carbon risk integration and to not do so may be deemed negligent from a risk management standpoint.

For current options on carbon awareness investing, the approaches revolve around the following (there may be cross-over approaches with the stated methods, therefore they are not mutually exclusive).

In terms of classifications for fossil fuel free investing, the most basic approach entails excluding companies that directly own and develop fossil fuel reserves. In Exhibit 1, the base case highlights the eight GICS sub-industry groups that are excluded ranging from all the sub-industries in the GICS energy sector in addition to the diversified metals and mining sub-industry. The fossil fuel free exclusions account for 6.0% of the total market capitalization of the S&P 500® (as of June 30, 2017), with the integrated oil & gas (2.8%) and oil & gas exploration & production (1.4%) sub-industries having the highest weighting of those excluded.

For many market participants, this approach represents the bare minimum in excluding fossil fuels and they feel that companies that are large consumers of fossil fuels in addition to those companies that use fossil fuels as feedstock should also be excluded. The extension in the carbon chain exclusions would then cull out sub-industries such as airlines, air freight & logistics, trucking, railroads, chemicals, fertilizers, and gas & power utilities. The total market capitalization weighting affected by this extended approach would more than double the impact compared to the base case exclusion and total over 12.8% (as of June 30, 2017).

In the S&P Carbon Efficient Index Series, we utilize data from RobecoSAM and conduct a thorough analysis on fossil fuel companies, and our exclusions are more stringent than the base case scenario but slightly less punitive than the extended scenario whereby we do not exclude airlines, logistics, trucking, and fertilizer companies (see Exhibit 2). 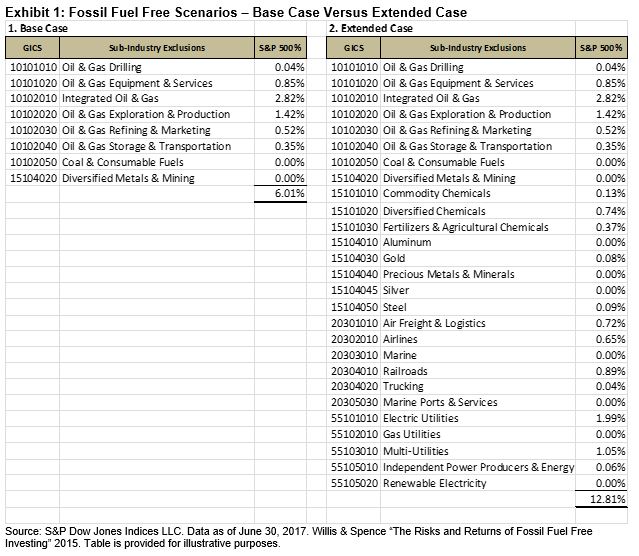 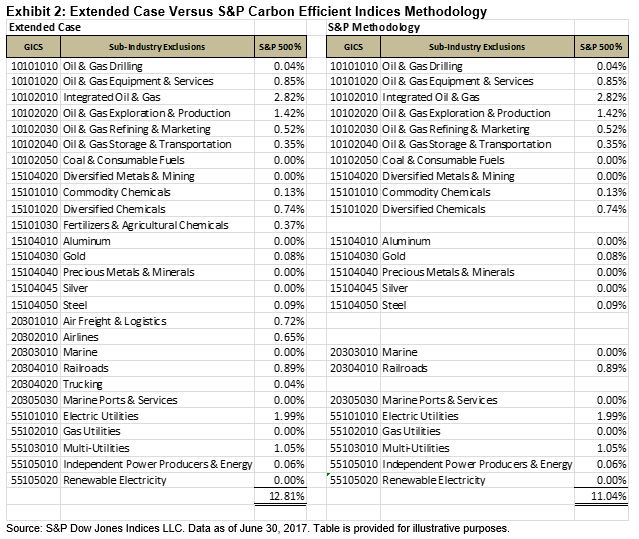 There are a couple of drawbacks to the current carbon aware investing approaches. Depending upon what the primary objective is in constructing the portfolio, the criticisms that are commonly expressed by market participants are:

In my next blog, we will examine the Financial Stability Board’s Taskforce on Climate-related Financial Disclosure and how this is setting up the landscape for the shift from the current data-driven carbon emission focused investing to a more sophisticated and impact-driven carbon risk paradigm of energy transition investing.

The Wall Street Journal recently reported that, according to analysis by Credit Suisse, the correlation among S&P 500 sectors had fallen close to its lowest level ever, and that this was good for active equity managers, “who find it easier to make money betting on specific companies or trends when stocks aren’t all moving together.” There’s some validity to these points, but the full story is more complex.

First, if you want to measure correlation in the S&P 500®, you should do it at the level of individual securities, not across the index’s 11 sectors. Inter-sectoral correlation tells us something about the benefit of diversifying across sectors, but it’s also indifferent to the securities within each sector. An active stock picker presumably doesn’t share this indifference. The good news is that, measured at the stock level, correlations are still quite low. Calculated properly, we find that the correlation of the S&P 500 as of Nov. 30, 2017 was an extremely low 0.10.

More importantly, for active managers correlation is not the whole story, nor even the most important part of the story. Dispersion, or cross-sectional portfolio volatility, offers a more meaningful way to identify opportunities for active management. 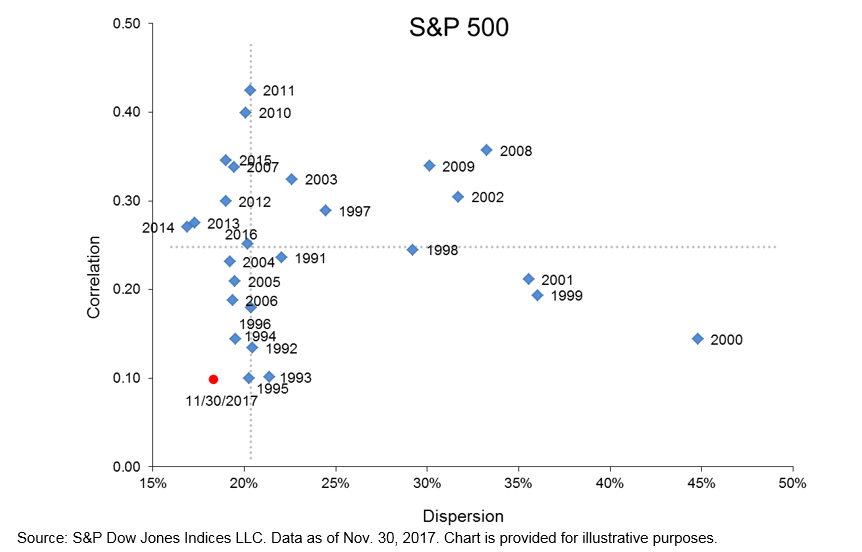 In contrast, dispersion is typically higher for small-cap stocks than large caps. Dispersion for the S&P SmallCap 600® spiked in November to an eye-popping 46.1%. Value added opportunities for skillful stock selection among small caps are therefore much larger than in the large-cap universe. 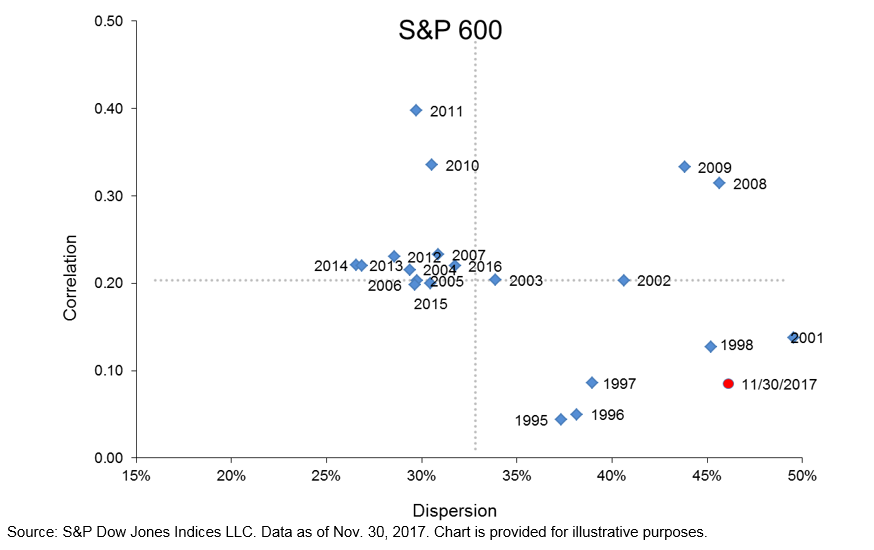 While correlations are indeed low, we caution that it is premature to rejoice and declare a “stock-pickers’ market,” particularly for large caps, until S&P 500 dispersion starts to move higher.