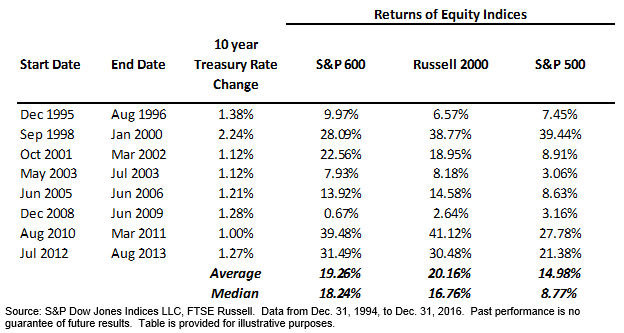 November’s US elections have buoyed investor optimism about the potential for tax reform, increased infrastructure spending, reduced regulation and accelerating economic growth. These expectations led to a 0.75% spike in the 10-year Treasury yield between Nov. 8 and Dec. 16, and a 5.2% increase in the US dollar, as measured by the US Dollar Index.1

Global demand for dividend-paying exchange-traded funds (ETFs) is strong, as evidenced by robust flows of over $20 billion in 2016; US-based ETFs accounted for more than half of that amount.1 The appeal of dividend-paying stocks is clear, as dividends can help provide a nice offset to rising inflation, while most fixed-coupon debt cannot hedge against rising prices.

Nonetheless, the timing of recent gains is counterintuitive; typically, rising interest rates cause dividend-paying shares to lag. This is because yield-seeking investors tend to trade out of dividend stocks and into bonds when interest rates rise. This can be seen in the chart below, which depicts the relationship between the excess monthly return of dividend-paying stocks (represented by the S&P 500 Low Volatility High Dividend Index relative to the S&P 500 Index) to the monthly change in the 10-year Treasury yield. Note the inverse relationship, with higher yields creating a drag on the excess returns of dividend payers. 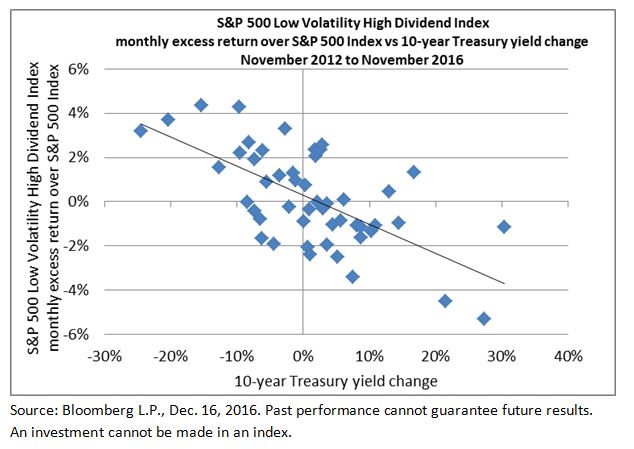 With yields rising, dividend stocks are bucking this long-term trend, although performance has varied by index. Following the Nov. 8 election through Dec. 16, the S&P 500 Low Volatility High Dividend Index lagged the S&P 500 Index by only five basis points, returning 5.76%, while the NASDAQ US Dividend Achievers 50 Index outpaced the S&P 500 Index by 3.20%, returning 9.01%.1 These counterintuitive returns may have investors wondering about the reasons behind the results.

One way to analyze portfolio returns is through factor exposure. Both the S&P 500 Low Volatility High Dividend Index and the NASDAQ US Dividend Achievers 50 Index are dividend-based indexes, but each has different factor tilts beyond just dividends, which can affect performance.

Factor exposure matters
To reiterate: While dividend-paying stocks may have surprised investors with their robust performance in the face of rising interest rates following the Nov. 8 election, much of this performance can be explained by factor tilts. In this case, exposure to value and smaller-cap stocks helped mitigate the impact of rising interest rates. As you can see, factors are not only valuable building blocks for constructing portfolios, but also useful tools for gauging portfolio performance.