For the first time since March 2008, energy was the only positive sector in the S&P GSCI for the month in Aug.  Energy gained 6.2%, while agriculture, industrial metals, livestock and precious metals lost 5.7%, 3.2%, 0.4% and -4.0%, respectively.  Not only is this the first month in over 8 years for energy to rise alone, but it has only happened 9 times since energy entered the index in Jan. 1983.

Historically, when energy rises, other sectors rise.  In 75% of the time, at least two other sectors rise, and on average gain 93 basis points. The sector performance, especially energy, has great influence on the overall returns of indices with different weights like the S&P GSCI that is world production weighted and the equally weighted Dow Jones Commodity Index (DJCI).  For example, it made the difference between being positive or negative for the month with the S&P GSCI gaining 1.8% and the DJCI losing 1.7% in August.

Although energy was the only positive sector, the individual commodity performance was dispersed. Almost half (11/24) were positive with at least two positive commodities from each sector, except precious metals that only includes gold and silver.  Gasoil gained 9.5% in Aug. and was the best performer while the worst performer was cotton that lost 11.4%, breaking a new record for its worst August ever with data since Jan. 1977.  That was in-line with most of the agriculture sector that was down, posting its 5th worst August ever. However, there was dispersion even inside the agricultural bloodbath, like from sugar. It gained 5.3% in Aug., that was its 8th best August in history from 1973. and its best 12-months in 5 years, up 71.6%.

The split performance shows how the fundamentals impact individual commodities and sectors separately. For example, while it seems oil is having major ups and downs, its volatility is only just over 35% that is slightly above its long-term average. In reality oil’s 90-day volatility has dropped from almost 60% in April to under 40% now, and is less than half its peak from the global financial crisis. Its moves are more controlled now and reflecting its fundamentals. Crude oil has had a total return of almost 40% since January when the suppliers have started to adjust. Since there are issues with OPEC’s ability to control the supply, the key for recovery is lower US inventories.  Volatility has also been about 1/3 less this year for metals and agriculture than in their 10-year histories.

Industrial metal commodity returns have had a big divide too. Copper lost 6.4% in August, driving it down 1.9% for the year while zinc is up another 2.9% for the month bringing its year-to-date gains to 42.6%. Zinc is now on pace to post its 3rd best year ever, only behind 2006 and 2009, using data from 1991. There have been supply cuts of zinc that may not be reversed until the companies feel they can produce again at sustainably higher prices. A similar story is true even for aluminum that is generally so abundant. However, the industrial metals as a sector are most sensitive to a weaker US dollar so if the dollar falls, that could be a big positive for the metals.

The Agriculture sector has been reacting as per its individual acreage and crop numbers. Its pricing is dependent mainly on the weather impacts and the commercial processor demand. For example, heavy rain has slowed sugar output, that has boosted prices; whereas cocoa prices increased from a drought.

No Rate hike in September

There are three FOMC meetings remaining this year: September 21st, November 2nd and December 14th. While there is no rule that all interest rate target changes must come at FOMC meetings, the focus is on the September and December meetings.  The November session is less than a week before the election so most believe that the (more or less) apolitical central bank will avoid November.  Given comments during and since the Fed’s annual August Jackson Hole meeting last weekend, a rate increase before the end of the year is a good bet.  With unemployment at 5% and inflation seeming to approach 2% from below, the central bank is comfortable with an increase in interest rates.  The choice between September and December depends on how the upcoming data look.  The first and most important number will be Friday’s report on employment.  Lately the monthly increase in jobs has been around 190,000; it will take a figure substantially higher than that to get a rate increase in September.  More likely, the central bank will wait until December when there will be a longer track record on employment and a strong GDP figure for the third quarter. If last December’s rate increase and one this year are seen as a new tightening cycle, it will be both slow and weak compared to history as seen in the chart.

Past quantitative easing inflated the Fed’s balance sheet and made traditional open market operations ineffective for setting interest rates. In response the Fed now pays interest on excess reserves banks hold at the Fed and uses reverse re-purchase agreements to adjust the fed funds rate target.  In her speech at the Jackson Hole symposium, Fed Chair Janet Yellen said the current process is working.  She also expressed confidence that the Fed will be well positioned to deal with a future downturn in the economy given the current policy tools including interest rate management, quantitative easing and forward guidance. Any discussion of negative interest rates was notably absent from her remarks. The second chart shows the recent evolution of the balance sheet. 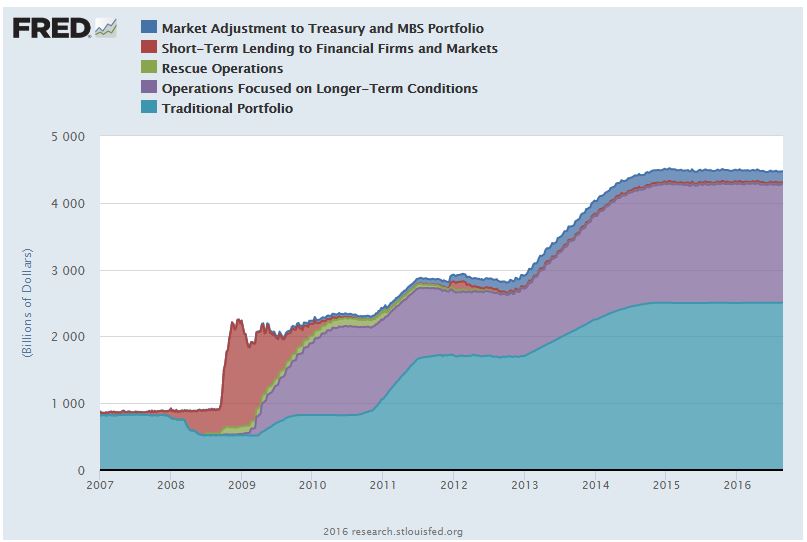 Sometime in the (more distant) future, the Fed is likely to begin efforts to shrink the size of its balance sheet. However, an early return to old fashioned open market operations is probably far off.

Conventional thought believes the Fed handles monetary policy, sets interest rates and attempts to control the inflation rate while the Treasury acting for the federal government is responsible for taxes, spending and the budget deficit (or surplus if one occurs).  At the Jackson Hole sessions Professor Christopher Sims of Princeton University argued that this division of labor doesn’t always work.  The central bank’s ability to control the money supply is limited by how many bonds it can buy or sell; and the number of bonds is determined by the treasury.  Higher interest rates raise spending by the Treasury, lead to either greater bond issuance or changes in taxes. However, if no one wants to buy the bonds, the central bank is expected to step up and be the buyer of last resort to finance the government deficit.

One message is that both monetary and fiscal policies are necessary for successful economic policy; however together they may not be sufficient.