ESG Integration for the Masses

Calm After the Storm

ESG Integration for the Masses 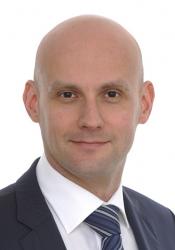 Historically, ESG indices have not attracted asset volumes comparable to smart beta index strategies.  This could be attributed to the fact that market participants and academics alike have struggled to link ESG-based strategies with financial performance.

As researchers shift their focus from how to study ESG to how to integrate ESG data into products and indices, two key issues related with integrating ESG data have come to light that may be the reason some market participants investors have held back from taking the plunge.

A new scoring approach called “Smart ESG” developed by RobecoSAM not only proves that ESG indicators can in fact be applied as stand-alone performance factors, but that they can also positively affect financial performance.

Smart ESG uses traditional ESG indicators as input, but it ensures that the aggregate score is uncorrelated to known factors and attributes the highest weight in the scoring process to those ESG indicators that have been found to predict stock performance, based on an in-depth and systematic factor testing of each individual ESG indicator per GICS® industry.

The outcome of this new scoring process is a set of so-called “ESG factor scores” that, when uploaded into a traditional factor model, show a positive information ratio of about 0.8 and are uncorrelated to all known factors.

This new ESG factor score is the basis of the new S&P ESG Index Series, a set of ESG indices launched in February 2016.  The S&P ESG Index Series includes the S&P 1200 Global ESG Index, S&P 500® ESG Index, S&P Europe 350 ESG Index, and the S&P/TOPIX 150 ESG Index.  This series is unique in the sense that it is the first global ESG index group that uses ESG as a smart beta factor.  These indices are weighted only by their ESG factor scores and show strong performance figures when compared to their market-cap-weighted counterparts (see Exhibit 1). 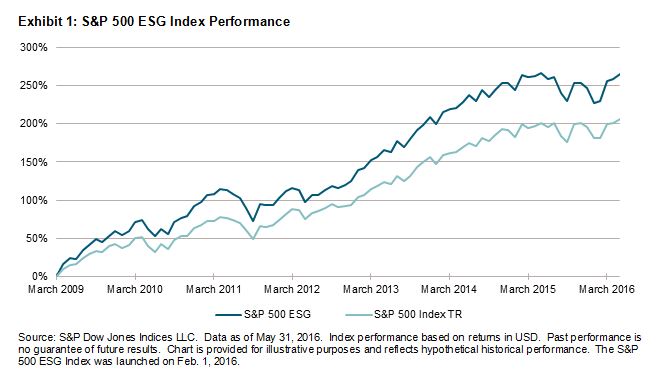 Market participants may be attracted to these indices due to the possibility of receiving an attractive financial return while also receiving a “social” return by tilting their allocations toward more sustainable companies.  This is a major step toward making ESG integration even more accessible to a broader range of market participants.

In AMC’s “The Walking Dead,” we meet Rick Grimes after he awakens from a coma to find himself in post-apocalyptic world filled with legions of zombies.  Rick calls these zombies “walkers,” but as each season goes by (season seven starts this October) different groups name them other things, like biters, roamers, lurkers, etc.  The names don’t matter because there are more of them each day, all walking around aimlessly until they meet survivors in Rick’s group, who generally dispatch them efficiently.

In much the same way, active management is still losing out to passive index management, despite the numerous active funds that appear year after year.  According to the 2015 year end SPIVA® Europe Scorecard, which measures the performance of actively managed funds against their benchmarks, 84% of U.S. active funds underperformed the S&P 500 and an astounding 98% of U.S. active funds trailed their benchmark over the past 10 years.[1]  Interestingly, Moody’s recently found that the proliferation of funds is one cause for lackluster returns, as “there are more than 9,250 mutual funds and 10,000 hedge funds, compared with 3,691 stocks in the Wilshire 5000 and 505 stocks in the S&P 500®,”[2] and that this “overcapacity leads to investment mediocrity, since true talent is limited and size works against the investor in the form of increased transaction costs and difficulty in identifying scalable investment opportunities.”[3]

The SEC recently approved generic listing standards for actively managed ETFs, which currently “represent a small portion of the more-than $2 trillion invested in U.S. ETFs, with about $26 billion in assets, according to Morningstar Inc.  Still, the number of such funds sold has mushroomed to 154 this year from 40 five years ago and just 14 in 2008.  Actively managed funds have largely underperformed their passive rivals.”[4]  It’s important to understand that “the main distinction between active and passive, or index-based, ETFs is that the underlying holdings in the active ETFs are dynamic and managed similar to the way a mutual fund portfolio is managed.”[5]  To be fair, “sponsors of active ETFs say they are more attractive than actively managed mutual funds because they typically have lower management fees and feature a tax structure that makes them less costly than mutual funds.”[6]  Perhaps performance will improve only because the costs are lower?  However, even “after subtracting fees, returns from active management tend to be less than those from passive management.”[7]  Also, when thinking about active management in general, it’s key to note that “even when fund managers succeed in outperforming their peers in one year, they cannot easily repeat the feat in successive years, as many studies have shown.”[8]

So don’t expect these zombie active ETFs to come to life all of a sudden just because the wrapper for their active management approach is different.  Instead, you can expect to wake up one day like Rick Grimes and find that the more than 9,250 mutual funds and 10,000 hedge funds have been reanimated as active ETFs, most of whose strategies will likely continue to underperform passive investment management.

[7]   SPIVA Institutional Scorecard–How Much Do Fees Affect the Active Versus Passive Debate?

Calm After the Storm

The dispersion-correlation map helps us to understand the dynamics of market volatility better. Last month we observed high levels of correlation in markets across the globe following the unexpected results of the Brexit referendum.

There’s no telling which direction dispersion and correlation levels are headed but one definite implication of current low dispersion levels is that the market environment for active managers to add (or subtract) value is constrained.

Three times a year the Federal Reserve surveys bank lending officers about credit standards, loan pricing and the demand for borrowing.  The Survey provides insights into business and consumer borrowing as well as where the economy may be headed.  The results of the July 2016 survey, released today, echo the details in last week’s GDP report: consumers are spending money and helping the economy while business is not rushing to invest.

The first set of charts summarizes the Survey findings about Commercial & Industrial (C&I) loans, the principal part of bank lending to business.  The Survey measures results by the net percentage of banks reporting stricter credit standards, larger pricing spreads or increased loan demand. The C&I picture reveals a slight tightening of credit standards (top panel). The data show a small decrease in the pricing spread, the difference between the interest rates charged by the bank and the rate it pays for funds. Loan demand in the bottom panel shows a very small portion of banks reported increased loan demand compared to a net decline in the previous survey earlier in the year.

Bank lending in the residential mortgage market has been active.  The second set of charts shows changes in lending standards and loan demand for mortgages. Both these areas have been volatile and in both the housing boom and bust are easy to spot. Since the beginning of 2015, banks have been easing mortgage lending standards across all mortgage types except sub-prime.  For bankers, this may be the lesson of the financial crisis; for borrowers the lesson hasn’t been fully learned. The lower right hand chart shows that demand for sub-prime loans follows the other categories closely.  Some banks reported that they do not make sub-prime mortgage loans.

The charts are from the Federal Reserve July 2016 Senior Loan Officer Survey.

July was a bloodbath for commodities in the Dow Jones Commodity Index (DJCI) losing 6.0% and in the S&P GSCI losing 9.6% in total return. Although the equally weighted DJCI is still up 7.4% YTD through July 29, 2016, the S&P GSCI that is world-production weighted gave up all its gains from Q2 and is now negative 65 basis points for the year, allowing stock performance in 2016 to overtake commodities for the first time since April.

In total, 16 of 24 commodities lost in July, which is the most since November’s Nightmare in 2015 when 22 were down. The month’s performance was highly segmented by sector with major losses from energy (-13.6%,) agriculture (-6.5%) and livestock (-7.4%.) Brent crude and (WTI) crude oil each declined notably -13.5% and -15.3%, respectively, in their 2nd worst July and 13th worst month ever on declining Chinese demand and rising supplies. Further, lean hogs posted its 4th worst month on record, -17.5%, and its biggest loss since Aug. 2002. Also, gasoil posted its 6 worst month on record, -16.8%, only the worst since Dec. 2015, but its worst July ever.  All the single commodities in these sectors lost except cocoa +0.4% and cotton, the best performer of all, gained 15.4% from plunging inventories due to drought.  This is cotton’s 13th best month and fifth consecutive positive month, driving its longest winning streak since Nov. 2013 – Mar. 2014.

However, cocoa and cotton weren’t the only bright spots in commodities in July. Both industrial and precious metals performed well, gaining 2.0% and 3.1% for the month in the S&P GSCI, respectively.  Aluminum was the only loser, down slightly, shaving off 79 basis points from oversupplied markets and excess capacity.  Nickel gained 12.4%, the most of any metal in the month on stainless steel production, though zinc’s gain of 6.5% brings its 2016 performance up to an impressive 38.5%, surpassing gold’s 2016 gain of 27.1%.

While gold held onto its record gain post Brexit vote, silver showed its sensitivity, adding 9.3% in July more than quadruple gold’s monthly gain of 2.3%.  This may indicate real fear hasn’t gripped investors into holding gold instead of silver yet and that they are willing to take some economic risk from industrial applications of silver.  On average when gold rises, silver rises about 2.7 times as much, but when gold falls, silver falls about twice as much.  Though in crisis times, gold often gains while silver falls. This last happened in Aug. 2015 around the Chinese stock market volatility, but also occurred in the global financial crisis, tech bubble burst, Black Monday and the early 80’s recession.

Last, one more potentially positive note is that nine commodities are showing positive roll returns, measuring shortages. This is happening in corn, cotton, feeder cattle, lean hogs, live cattle, natural gas, soybeans, sugar and wheat, It is the most since Mar. 2015 when 11 commodities were in this condition, and is particularly rare for natural gas which hasn’t seen a positive roll in 18 months.  Overall, it is a complete turn around from the commodity conundrum experienced in April despite the record positive performance just 3 months ago.