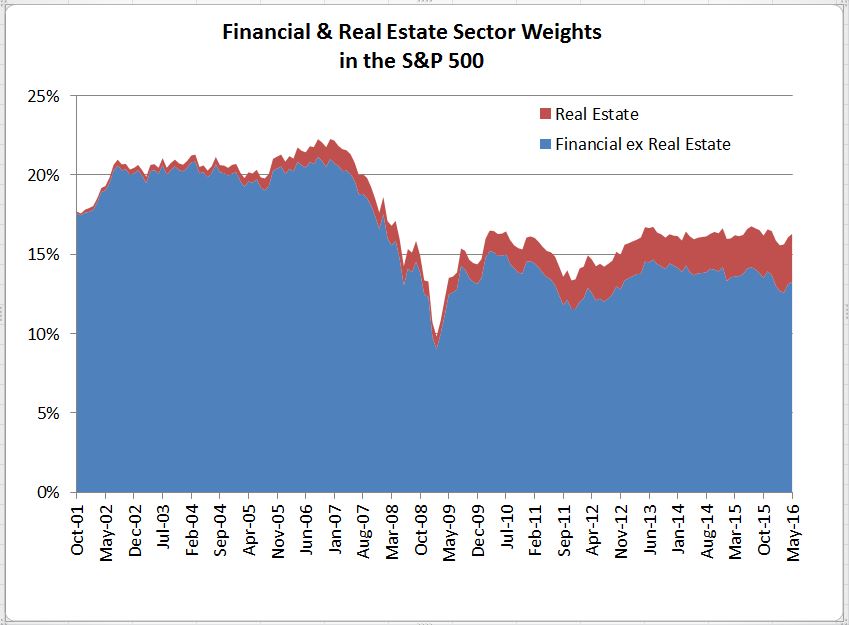 In recent years, leveraged and inverse (L&I) ETFs have gained significant traction in Asia. Thanks to the relaxation of listing regulations, more L&I ETFs are listing in Japan, Korea, Taiwan, Australia, and recently Hong Kong.  The number of L&I ETFs listed in Asia is on the rise; it was up to 87 as of June 13, 2016 (see Exhibit 1).

The growth of AUM and the turnover of L&I ETFs have outpaced those for other non-L&I equity ETFs in the Pan Asia region. This year, the AUM of L&I ETFs grew 6.8%, while other equity ETFs only increased 2.8%.  The turnover of L&I and non-L&I equity ETFs showed a significant difference, with -7.1% and -61.9%, respectively.*  It is worthwhile to highlight that the amount of AUM of L&I ETFs in the Pan Asia region is rather low, but the turnover is high when compared to other equity ETFs.  According to the data released by the Taiwan Stock Exchange, ETF turnover in Taiwan has increased by 45% to 299.5 million units (YoY 2015), and this growth was mainly driven by the strong demand of L&I products.  Taking a look at the bigger picture in Pan Asia, L&I ETFs only represent 5.9% of the total AUM, but they garnered 53.2% of total turnover and thereby bolstered the market liquidity (see Exhibit 2).

To tap into Asian demand for L&I products, Hong Kong finally opened its doors to allow the listing of those products. The first batch of L&I products have been launched in Hong Kong to bet on and against mainly overseas markets, given that only non-Hong Kong and non-mainland indices were eligible originally.  There are other L&I products in the pipeline, and they are expected to come to the market soon.  Hong Kong has long been thought of as a market with a lack of product innovation and has fallen behind Tokyo and Shanghai by turnover in the region.  With the new L&I listings in Hong Kong, we will see if its market can follow in the examples of Japan, Korea, and Taiwan in their boosting of ETF turnover.

L&I ETFs are becoming more popular, as they may serve as trading tools for investors to potentially amplify returns regardless of market direction. However, investors should be aware that L&I products, unlike conventional ETFs, are designed for short-term trading and associated with potential risks such as daily compounding and daily rebalancing.

The latest weekend survey by the Daily Mail predicted the outcome of the June 23, 2016, U.K. vote in the “stay” column 45%-42%, as European markets either ralied or rebound on the news—depending on their timing and view of the situation.  The vote, which has been talked about for a while, came to the front burner last week, as the possibility of a “go” vote emerged, and markets reacted to the potential of significant European disruption in financing, trade, and labor.  The European impact will be significant, regardless of the vote, given the split among the voters and politicians and the mostly one-sided “stay” among business leaders.  Market volatility and an increase in trading is expected—again, regardless of the outcome—with the action taking effect globally.

A vote to stay will not end the debate, but could disrupt markets less, as the status quo permits business to continue.  In the longer term, since the issues would not stop with a “stay” vote, the ability of companies to commit to business plans (be it capital expenditures, hiring, M&A, or financial) could be impaired.

A vote to go could bring years of uncertainty, as the process to decouple would start, along with expected higher market (and political) volatility.  The best analogy at this point appears to be that a “go” vote would be similar to getting a divorce with no prenuptial agreement.  Issues of separation, use, and ownership of assets, rights, and labor would each need to be worked out by the overseeing agencies (and politicians).  The uncertainty in the short term could cause a disruption in business operations, as trade and travel would have to be negotiated.

From this side of the pond, the impact on U.S. stocks might be considerably less, but a knee-jerk reaction could be expected, with a prolonged one for a “go” vote.  Overall, S&P 500® companies derive 45% of their sales from abroad, with approximately 8% of all sales from Europe.  U.K. sales have been on the uptick this year and account for approximately 25% of the European sales (2% of all S&P 500 sales).  Reporting on foreign sales in the U.S. is poor to say the least, with only one-half of the companies giving detailed information.  Even among those that report, a country breakdown is typically not given.  That said, Exhibits 1 and 2 show some of the issues that are more exposed to U.K. sales, along with those with exposure in Europe. 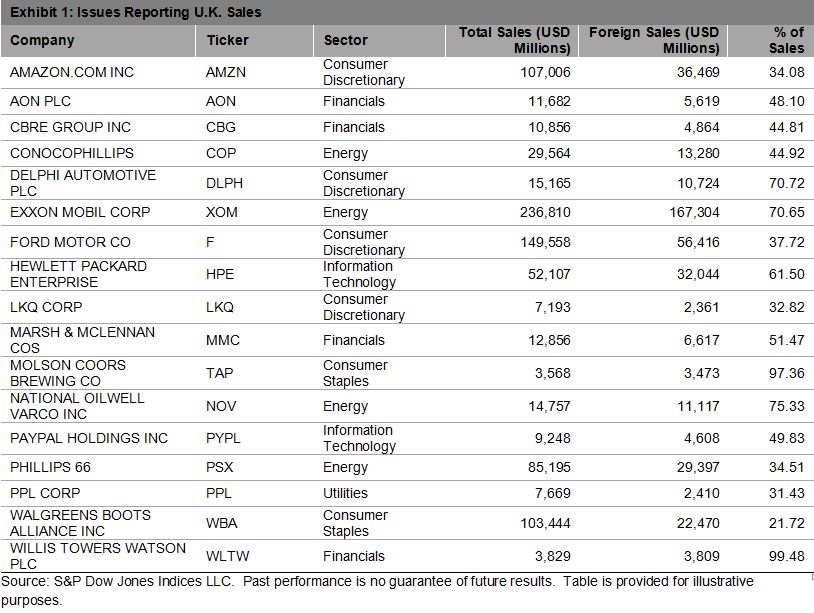 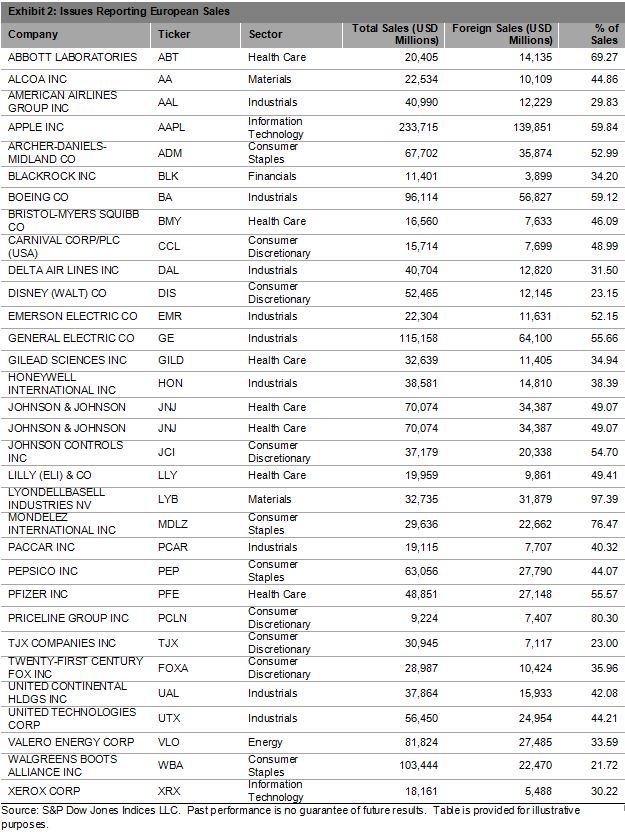