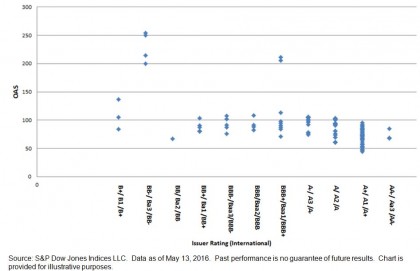 The credit default swap (CDS) market is beginning to show spreads widening for consumer discretionary entities which is a bad signal for the economy.  Credit spreads between the consumer discretionary sector and high grade bonds have jumped wider in recent weeks to end last week at 84bps.  The bonds of these entities haven’t reacted too much as they closely match the performance of the high grade corporate bond market tracked by the S&P 500 Bond Index.  This could in part be driven by the demand for investment grade bonds.  Consumer discretionary equities have seen a negative 1% quarter to date return.

Why watch credit default spreads?  They can be an early warning sign of trouble ahead.  As recently as mid March the spread differential between the S&P/ISDA CDS U.S. Consumer Discretionary Select 20 Index and the S&P/ISDA U.S. 150 Credit Spread Index was only 29bps.  That spread has widened to 84bps is a few short weeks.  The S&P/ISDA U.S. 150 Credit Spread Index tracks the CDS of the largest borrowers in the S&P 500 Index.