According to the S&P China Corporate Bond Index, the market value of Chinese corporate bonds was approximately CNY 26.4 trillion and represented 36% of the overall China bond market as of May 5, 2016.  It is a robust expansion compared with the mere 6.7% exposure in 2007 (see Exhibit 1).

The yield-to-maturity of the S&P China Corporate Bond Index came down 170 bps to 3.66% in 2015. This spread tightening in 2015 was largely due to improved liquidity, particularly with the correction in A-shares in the first half of 2015.

However, this trend is reversing as fundamentals start to weigh in.  Defaults and concern about the deteriorating credit quality of Chinese corporates captured plenty of global headline news.  Investors raised concern about state-owned-enterprises, particularly those in the industries affected by overcapacity, as government support can no longer be assumed. The yield-to-maturity of the S&P China Corporate Bond Index widened 18bps to 3.84% year-to-date, while its total return climbed 0.49% in the same period.

Across sector-level indices, industrials took the biggest hit with recent defaults in the steel, mining, and cement sectors.  The option-adjusted spread of the S&P China Industrials Bond Index was the highest; it widened 50 bps to 155 bps over the three-month period ending May, 2016 (see Exhibit 2). 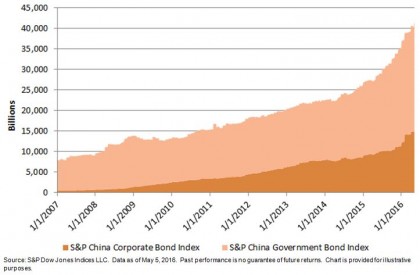 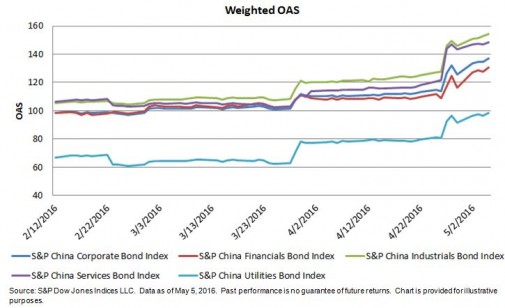