Stocks and bonds behave differently in most market environments and the resulting low historical correlation between the two has been an important factor in many investment strategies. With the launch of the S&P 500 Bond Index we can now compare the performance of stocks and bonds of the same ‘blue chip’ entities in the iconic S&P 500 Index.

Chart 1: Selected S&P 500 Sector Indices for both stocks and bonds 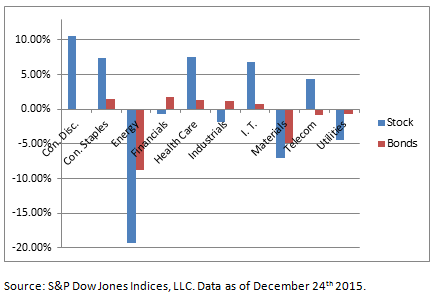 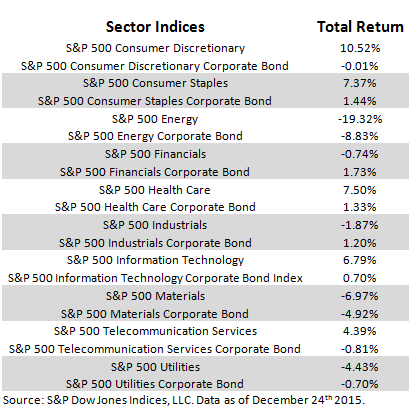 When a full year of data is available it will be important to consider the impact of volatility in each asset class by comparing the Risk Adjusted Returns within each sector.

As the fiscal saga continues for Puerto Rico and it’s residents the impact has been crushing for the bond holders in 2015.  The total market value of bonds tracked in the S&P Municipal Bond Puerto Rico Index has fallen by over $7.5billion. 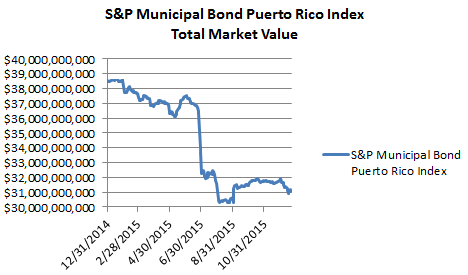 Yields for bonds in the S&P Municipal Bond Puerto Rico Index have ended at 9.62% which is 205 basis points cheaper than year end 2014.  Prices of bonds in the index have been volatile to the down side for most of the year and yields reached their cheapest point on June 29th when they got as high as 9.9%. 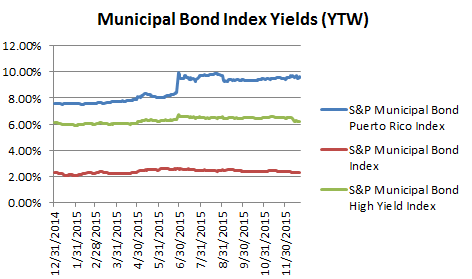 Some aspects about the index that impact this result: 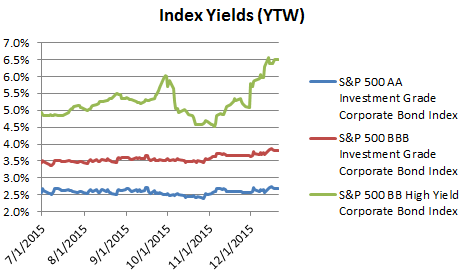 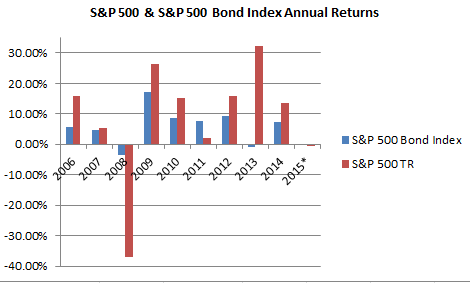 New concepts of ESG are evolving
The biggest shift since the beginning of 2015 has been that the asset owner ideology has changed to involve concepts such as “Impact Investing”, “Natural Capital”, and “Universal Owner”. We have seen initiatives from pension investors that provoked a visible shift away from a purely financial viewpoint to one where longer-term stakeholder value is critical, for example:

Climate change talks dominated sustainability discussion in 2015 as COP21 approached
Finally, as we approached COP21 in Paris this year, the core of sustainability discussion was increasingly centered on climate change, which has received a consensus priority status as both the most important and the most pressing subject. The Montreal Carbon Pledge that was adopted in September 2014, whereby signatories agree to measure and publicly disclose the carbon footprint of investment portfolios annually, has reached $10 trillion of assets by the time of COP21, and the Portfolio Decarbonization Coalition whereby members will drive GHG emissions reductions on the ground by decarbonizing their portfolios has accumulated $600 billion. The Mercer report “Investing in the time of Climate Change” presented a very solid and quantified investment case, with Coal and Oil industries being the biggest losers under various climate scenarios and Renewable Energy being the only winner.

The impact of COP21 and beyond
COP21 brought a ray of hope to those who have been keen to minimize the carbon-related risks.  Supported by the initiatives of public climate leaders, particularly the President of France, Francois Hollande, 195 nations’ delegations have been able to reach a legally binding and universal agreement targeting to get the climate change constrained within 2 degrees beyond the pre-industrial level and aiming to explore the possibility of 1.5 degrees.  The agreement sets a coordination framework for individual governments, government and supranational agencies and NGOs in road mapping and implementing a transition to low carbon economy. This will require approximately $1 trillion dollars to be invested annually in low-carbon technologies and continued technological innovations, shift of funds from developed countries to developing countries.  Part of the solution is in activating long-term and low cost financial solutions for public and private sector. Low carbon indices are clearly important part of this toolkit, as it helps the industry measure the performance of the low carbon market.