This is the fourth post in a series of blog posts relating to the in-depth analysis of performance differential between the S&P SmallCap 600® and the Russell 2000.

The previous posts demonstrate that the different historical risk/return profiles of the two U.S. small-cap benchmarks can be partially explained by the July reconstitution effect and the additional S&P DJI screening criteria.  The difference in returns between the two indices highlights the fact that investors should be aware that index construction differences can have a meaningful impact on returns.  Both indices represent a particular market segment which, in turn, poses practical considerations for both passive and active investors who employ index returns as a key decision input in the investment process. 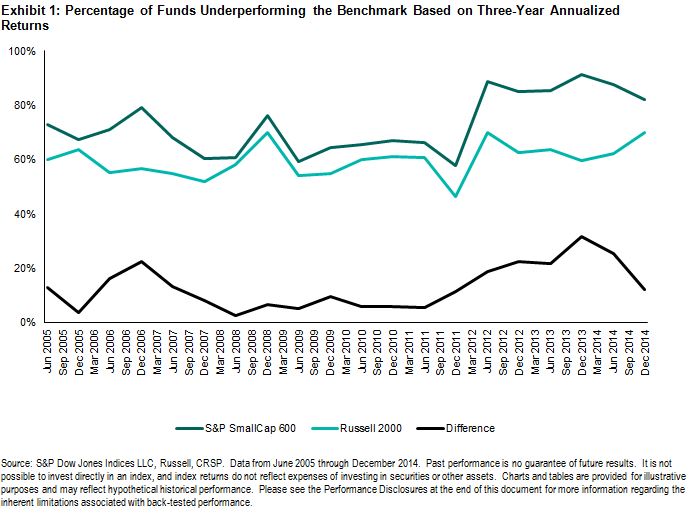 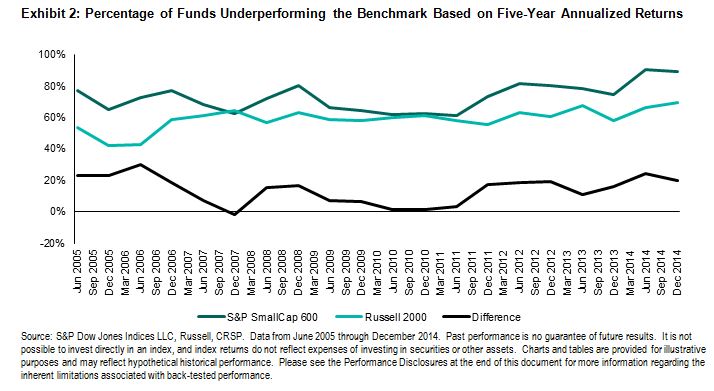 These results highlight the difficulty investors sometimes face in measuring the value offered by active managers.  If different benchmarks measuring the same asset class can yield different realized returns, the ability to differentiate a skilled manager from an unskilled one can be an arduous process.  We now look at the information ratio (IR), defined as the active return divided by active risk, to measure the effectiveness of a manager’s investment insight, irrespective of the benchmark against which he or she is being measured.

To do this, we calculate the IRs of the active small-cap funds against the two benchmarks.  With active funds in the Lipper Small-Cap Core Fund category as the universe, the average IR using rolling three-year annualized returns is computed on a quarterly basis from December 1996 through December 2014.  We see that there is a noticeable difference in the average IR of the category when the S&P SmallCap 600 is used as the benchmark compared with when the Russell 2000 is used.  The average of the three-year rolling IRs is negative for the universe compared to the S&P SmallCap 600 (IR = -0.24), while it is positive when compared to the Russell (IR = 0.25).

The rolling three-year information ratios show that the S&P SmallCap 600 is almost always the tougher benchmark to beat for active managers.  Investors may want to consider that the selection of a benchmark matters when it comes to benchmarking domestic small-cap equities. 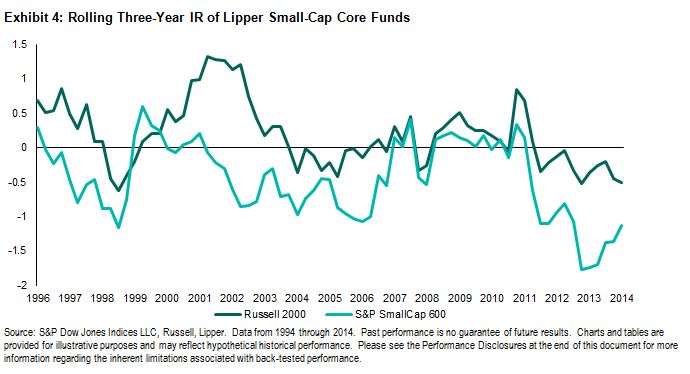 Tagged:
A Tale of Two Benchmarks, Russell 2000, S&P SmallCap 600
The posts on this blog are opinions, not advice. Please read our disclaimers.