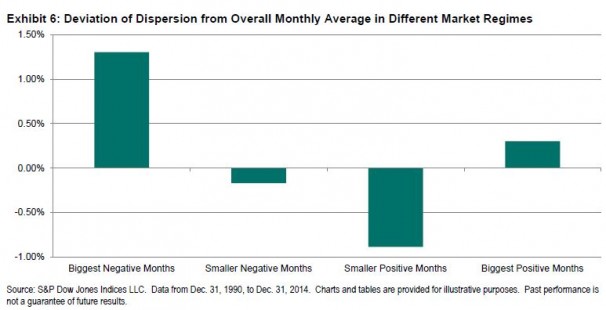 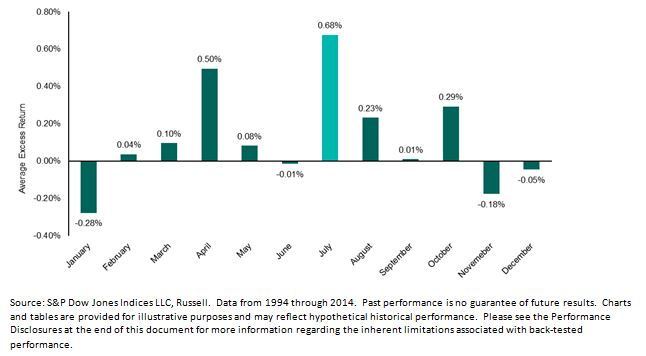 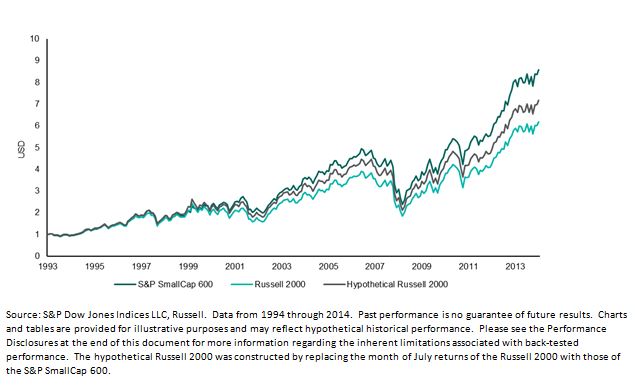 Although the low volatility anomaly was first documented more than 40 years ago, it was the trepidation and volatility in the years following the most recent financial crisis that propelled the concept to the forefront of investor interest.  In recent years, the phenomenon has been well covered, by both academics and the investment community, in the form of innovative financial instruments that exploit the anomaly and subsequent attraction of assets to those vehicles.  The low volatility anomaly exists not just in the U.S., but instead seems to be universal.  The current debate is less focused on the existence of a low volatility effect and more on the construction of various strategies to exploit the phenomenon.

In the U.S., for example, the S&P 500® Low Volatility Index outperformed its benchmark, the S&P 500, from 1991 to 2014 by 101 bps compounded annually—with 31% less volatility.  What is the reason for its success?  Our rankings-based method of portfolio construction not only screens for stocks by factor, it also weights by factor (or the inverse of the factor, in this case) to achieve its objective.  This methodology has resulted in large sector weights, historically.

However, strategic sector tilts don’t paint the complete picture here.  If we only apply the returns of the S&P 500 sectors to the respective sector weights in S&P 500 Low Volatility Index over the last 24 years, the “hypothetical” low volatility portfolio can account for 69% of the total risk reduction.  This means that being in the “correct” sector during this period accounted for more than two-thirds of the volatility reduction achieved by the S&P 500 Low Volatility Index (see Exhibit 1).  In the same period, the return increment attributed to being in the “correct” sector was only 29%, from which we can conclude that more than two-thirds of the outperformance is idiosyncratic to S&P 500 Low Volatility Index’s methodology.

As is the case with many factor-driven portfolios, various portfolio construction methods can result in lower volatility.  The ability to protect the portfolio in relatively stable sectors is a feature—not a side effect—of the S&P 500 Low Volatility Index’s rankings-based methodology.

Oil price shocks and a revisit of deflationary concerns in Europe are just some of the “gifts” the New Year has brought in 2015 to increase volatility in global financial markets.  The concern for financial advisors is that loss of invested capital may come with volatility if there is a need or a client decision to sell.  For those U.S.-based financial advisors already skeptical about the strength and stamina of the U.S. equity bull market, some now perceive a fork in the road.  They can continue down the path of diversification, or they can explore a path of adopting more proactive and potentially more costly risk management as a means of preventing loss.

Whether a financial advisor needs to do more than adequately diversify client portfolios is a subject of debate within the advisor community.  At the emotional heart of the debate is the question, “How much can your clients bear to lose?”

Some financial advisors have a “memory” from the last recession that diversification, or asset allocation failed.  How strong that memory of failure is may depend on how heavily their portfolio was tilted to U.S. large-cap equities or other risky assets during the time of the recession.  Citing data and analysis from Sam Stovall, U.S. Equity Strategist at S&P Capital IQ:

Importantly, and seemingly in contrast to a view that diversification “failed,” Sam found that a 60/40 portfolio (S&P 500/Long Term Treasury Bonds) returned -12.6% over this same period of time in 2007-2009.  While this piece of Sam’s data and analysis is from a very thorough presentation,  Sam has said that “…maybe it is our memory that failed us and not diversification.”  Or it could be that even a loss of 12.6% is too much loss for some financial advisors.

Regardless of perceptions of the success or failure of diversification, some asset managers and advisors who are portfolio managers take the view that diversification may not be sufficient for their clients’ needs to prevent loss of capital in times like the recession of 2007-2009.  I recently asked Jerry Miccolis, Principal and Chief Investment Officer of Giralda Advisors to discuss asset allocation and portfolio risk management and his analysis, testing, and modeling of a number of index benchmarks based on S&P DJI and CBOE indices.  I invite you to read our entire interview with him.  For those short on time, Jerry told me that diversification is not sufficient for his clients’ needs because it will not guarantee “…sufficient risk management in times of severe market stress.”  Jerry points out that during such times, it is possible for correlations among asset classes to rise and that the Great Recession provided a recent example of that.