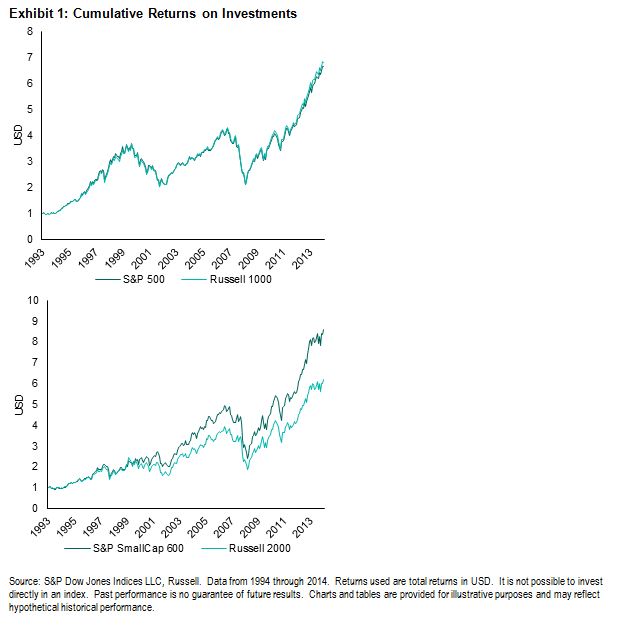 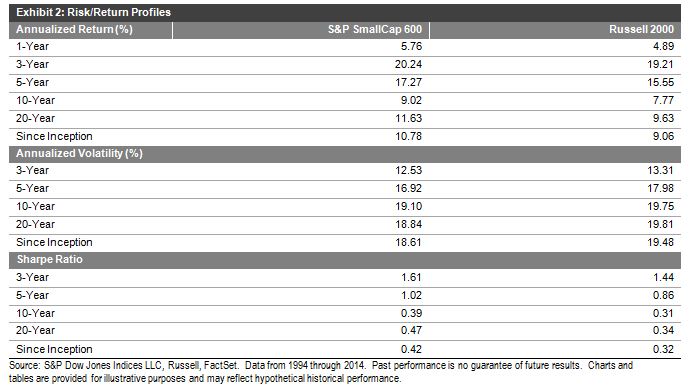 It can be interesting to try and explain the world of indices and benchmarks to people from non-financial backgrounds because, at times, it can pose a bit of a challenge.  For me, it is a revelation to find out that what I consider as generic information and common knowledge is not quite as simple for many.  The general questions being: “What is a benchmark?” Why do you need it?”, and “How do you choose the correct one?”

I thought I would try and simplify this for common understanding.  A benchmark is an ideal comparative measure that forms a standard or norm and can be used to gain an understanding of a relative market area or segment.  For example, the S&P BSE SENSEX is considered the barometer of Indian markets.  Hence, one can understand whether Indian markets have fared well or not based on the index’s movements.  The S&P BSE SENSEX’s growth percentage provides periodical statistics on the performance of Indian equity markets.

Source: Asia Index Pvt. Ltd.  Data as of Feb. 28, 2015.  Charts and tables are provided for illustrative purposes only.  Past performance is no guarantee of future results.

Source: Asia Index Pvt. Ltd. Data as of Feb. 28, 2015.  Charts and tables are provided for illustrative purposes only.  Past performance is no guarantee of future results.

So how are such benchmarks or indices crafted to be able to provide ideal measuring tools within the segment they represent?  Indices are all created based on strict rules.  These rules take into account market dynamics and suitability for the region it will represent.  For example, rules that work in the U.S. may not necessarily be applicable to the South Asia region.  This is true within regions, too: if we were to look at South Asia, the markets in Sri Lanka are largely different than those in Bangladesh, for example.  Hence, when rules are crafted, we need to see the maturity and depth of the markets.  Furthermore, market consultation also proves to be very beneficial in ensuring that benchmarks are suitable for market participants.

It is important to ensure comparisons are made among suitable benchmarks.  As the saying goes, we must compare “apples to apples” in order to understand which is better.  Similarly, for investments, the comparison should be made with the similar index benchmark, in order for investors to understand the performance of their portfolios or investments in comparison to the market standards.  So if I am investing in an infrastructure fund, it would be most ideal to compare the fund with the market benchmark, meaning, an infrastructure index rather than a generic market index.

The yield of the S&P/BGCantor Current 10 Year U.S. Treasury Bond Index started the week of March 9, 2015, at 2.20% and continued lower, closing the week at a 2.12%.  The majority of this move is credited to the European Central Bank’s (ECB) purchasing of debt to support its economy.  The ECB’s U.S. Federal Reserve-style purchasing drove yields lower globally, along with moving the euro currency from 1.08 to an almost-parity with the U.S. dollar of 1.04.  European investor demand for the higher yields of U.S. Treasuries led to the successful auctioning of 3-, 10-, and 30-year Treasuries totaling USD 58 billion in par amount.

Riding the line between investment grade and high yield, the S&P Crossover Rated Corporate Bond Index, which seeks to measure the performance of U.S. corporate bonds rated from “BBB+” down to “BB-“, has returned -0.66% MTD and 1.40% YTD, as of March 13, 2015.

The S&P U.S. Investment Grade Corporate Bond Index is down 0.61% MTD and has returned 1.10% YTD, as of March 13, 2015.  The past week saw new issuance of at least USD 42 billion, as deals across all maturities came to market.  Zimmer Holdings, along with financial firms such as Toronto Dominion, Barclays Plc, ING Bank N.V., and Lloyds Bank, all contributed to the amount of investment-grade outstanding debt.

Issuance is not unique to the investment-grade sector, as U.S. municipal bonds have also experienced a surge of new issuance by cities, states, and government entities.  According to Aaron Kuriloff’s article,[1] USD 68.5 billion of municipal bonds have been sold this year.  The S&P National AMT-Free Municipal Bond Index is down 0.38% MTD and is returning 0.28% YTD.

The high-yield bond market, as measured by the S&P U.S. Issued High Yield Corporate Bond Index, had recently been clawing its way up in performance for 2015.  January’s mild return of 0.80%, coupled with a February return of 2.25%, was heading in the right direction, but March has been fatal so far.  The index has returned -1.01% MTD, bringing its YTD return to 2.03% as of March 13, 2015.

Tom Lydon’s recent article[2] discusses the pull back in the high-yield market and mentions new issuance as a factor.  Additional supply has had an effect on pricing, though the effect of oil prices and the size of the energy sector within this market should not be forgotten.  Exhibit 1 shows the energy sector (14%) of the S&P U.S. Issued High Yield Corporate Bond Index in comparison with movements in oil prices.

Investors’ need for yield may have enticed them back into high yield bonds at the end of January, as oil moved from USD 45 to USD 53 a little too early.  Even as the news reports increases in retail gasoline prices, the USD 54 price of oil in mid-February has slowly moved down to a price of USD 44 on the NYMEX WTI crude future contract in mid-March.

As mentioned in the Lydon article, the SPDR Barclays Short Term High Yield Bond ETF has attracted USD 96.5 million in assets.  Shorter duration, high-yield bonds, such as those captured in the S&P 0-3 Year High Yield Corporate Bond Index, are up 0.09% MTD and 1.85% YTD (as of March 13, 2015), as investors move down the curve in order to reduce rate volatility and term risk exposure. 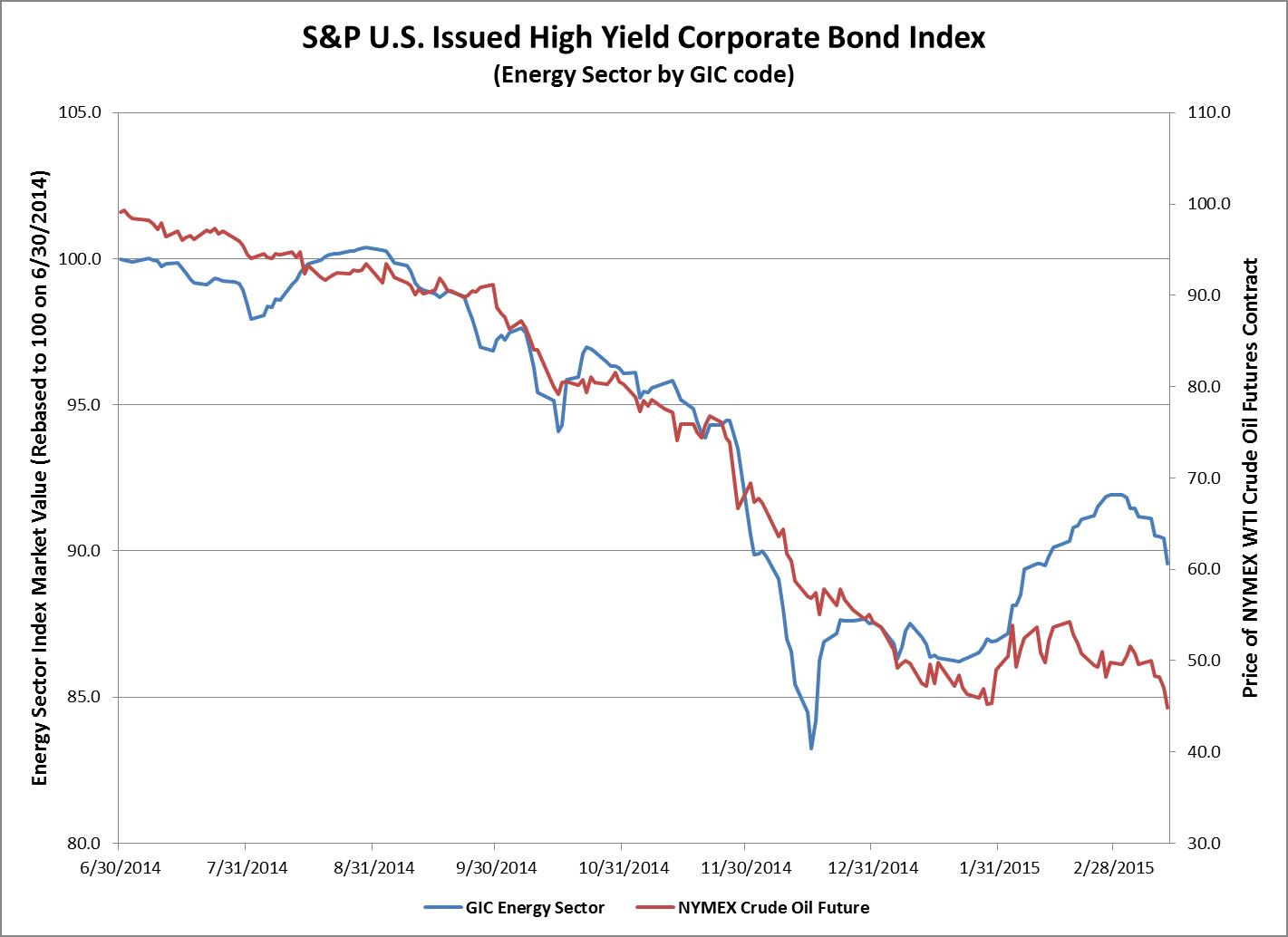 Source; S&P Dow Jones Indices LLC, NYMEX. Data as of March 13, 2015.  Charts and tables are provided for illustrative purposes.  Past performance is no guarantee of future results.

Following three consecutive weeks of declines for the S&P 500®, pundits are asserting that investors have more to fear than simply the Ides of March.  As of the market close on Friday the 13th, the S&P 500 had declined 3% in March on a total return basis.

Defensive strategies can provide some protection from market fluctuations.  Specifically, low volatility strategies thrive in volatile markets.  The concept is fairly simple: select stocks that have been historically less risky in an attempt to capture some market upside, while limiting the potential downside. 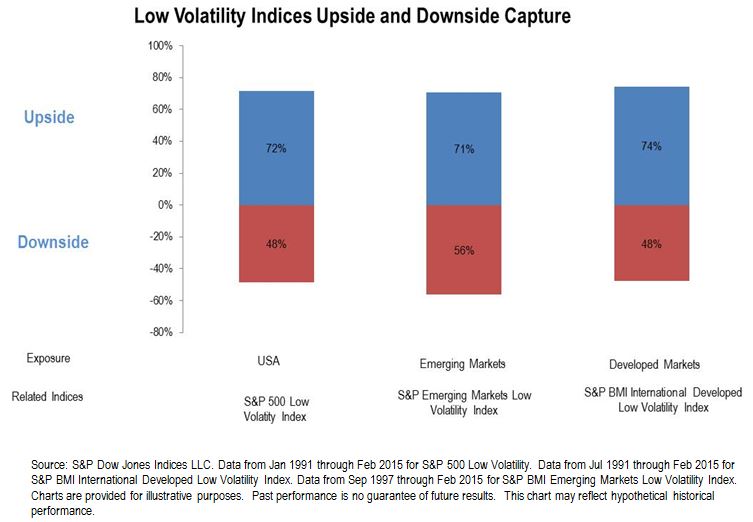 While it seems counterintuitive, lower volatility strategies have actually outperformed the market over the long term.  This is often referred to as the “low volatility anomaly”, and it may be due to downside protection: Investors win by playing defense, or simply by not losing. 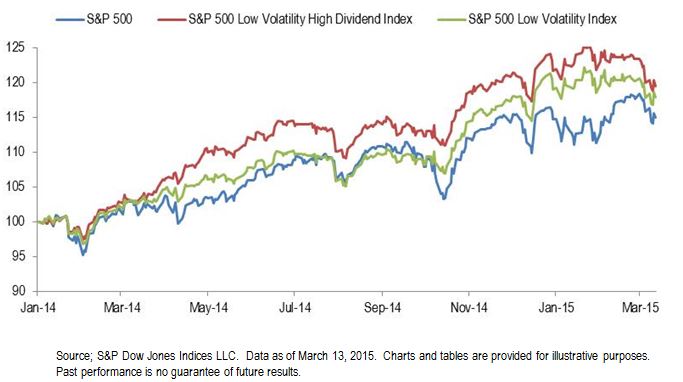 Low-risk approaches are not as exciting as their high-risk counterparts.  They certainly do not enjoy the full rush of market gyrations.   When it comes to results, however, consistency is bliss.