Oil price shocks and a revisit of deflationary concerns in Europe are just some of the “gifts” the New Year has brought in 2015 to increase volatility in global financial markets.  The concern for financial advisors is that loss of invested capital may come with volatility if there is a need or a client decision to sell.  For those U.S.-based financial advisors already skeptical about the strength and stamina of the U.S. equity bull market, some now perceive a fork in the road.  They can continue down the path of diversification, or they can explore a path of adopting more proactive and potentially more costly risk management as a means of preventing loss.

Whether a financial advisor needs to do more than adequately diversify client portfolios is a subject of debate within the advisor community.  At the emotional heart of the debate is the question, “How much can your clients bear to lose?”

Some financial advisors have a “memory” from the last recession that diversification, or asset allocation failed.  How strong that memory of failure is may depend on how heavily their portfolio was tilted to U.S. large-cap equities or other risky assets during the time of the recession.  Citing data and analysis from Sam Stovall, U.S. Equity Strategist at S&P Capital IQ:

Importantly, and seemingly in contrast to a view that diversification “failed,” Sam found that a 60/40 portfolio (S&P 500/Long Term Treasury Bonds) returned -12.6% over this same period of time in 2007-2009.  While this piece of Sam’s data and analysis is from a very thorough presentation,  Sam has said that “…maybe it is our memory that failed us and not diversification.”  Or it could be that even a loss of 12.6% is too much loss for some financial advisors.

Regardless of perceptions of the success or failure of diversification, some asset managers and advisors who are portfolio managers take the view that diversification may not be sufficient for their clients’ needs to prevent loss of capital in times like the recession of 2007-2009.  I recently asked Jerry Miccolis, Principal and Chief Investment Officer of Giralda Advisors to discuss asset allocation and portfolio risk management and his analysis, testing, and modeling of a number of index benchmarks based on S&P DJI and CBOE indices.  I invite you to read our entire interview with him.  For those short on time, Jerry told me that diversification is not sufficient for his clients’ needs because it will not guarantee “…sufficient risk management in times of severe market stress.”  Jerry points out that during such times, it is possible for correlations among asset classes to rise and that the Great Recession provided a recent example of that.

As oil prices have fallen, many investors with exposure to energy companies have wisely kept an eye on VIX. But there is another volatility benchmark – one more suited to energy equity investments – which investors should also watch carefully: VXXLE.

VXXLE is the ticker for the CBOE Energy Sector ETF Volatility Index. This index has same methodology as VIX. However, instead of tracking S&P 500 options, it is based on options tied to the Energy Select Sector SPDR® Fund, a popular ETF known by its ticker, XLE. 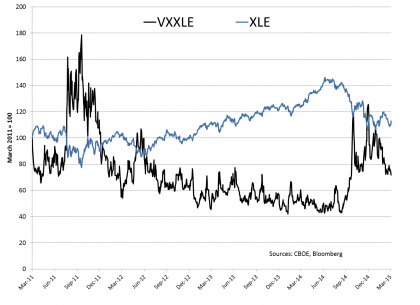 Even though CBOE does not yet offer derivatives based on VXXLE, this index still has great value as a benchmark, particularly when coupled with other related information. As an example, some analysts compare the changing value of a volatility index with the price-to-earnings ratio of the companies in the underlying index. 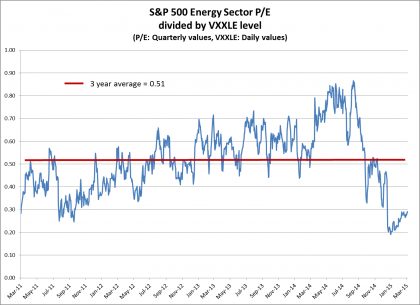 Analysts say that when such a ratio is high, the market may be complacent and a prudent investor might want to scale back their exposure. On the other hand, if this ratio moves to a lower range – indicating prices are relatively low and anxiety is high – a “crash” may be under way and there could be an opportunity to take a contrarian position.

In the case of VXXLE, this ratio has moved drastically over the past year. As the chart above shows, this ratio has gone from its 3-year high to a record low. And in line with this, the S&P Energy Select Sector Index has tumbled, at one point losing approximately 25% of its value.

If you want to use VXXLE to inform your investment decisions, you can access more information on Chicago Board Options Exchange’s website. Also, a tutorial on VIX’s methodology, which VXXLE shares, can be found here.

*Author’s note: Due to data limitations, the second chart uses the P/E for the S&P 500 Energy Sector Index instead of the S&P Energy Select Sector Index. These indices share the same constituents but use different weighting schemes. 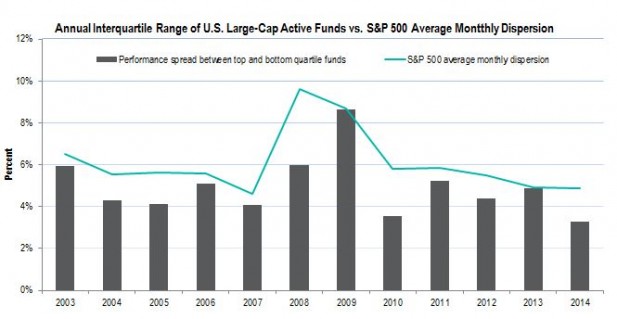