It’s widely known that Black Friday, the Friday after Thanksgiving, is the traditional kickoff for the Christmas shopping season. Much like retail shoppers, Wall Street is experiencing a similar event though it does not come with such a defined time period. Early indications of companies attempting to time corporate issuances came in September of this year when Verizon Communication Inc. issued $49 billion corporate bonds just prior to the Sept. 18 FOMC rate decision.  These bonds were very well received by the investor community and, for the bonds that met qualification rules, were eventually added to the S&P U.S. Issued Corporate Bond Index.

It was reported in the press that Verizon executives wanted to sell as many bonds as possible the first time around. By wrapping up the financing early, Verizon essentially eliminated the threat of rising interest rates. The S&P/BGCantor Current 10-Year U.S. Treasury Index’s yield-to-worst had risen 19 basis points from the beginning of the month leading into the September Verizon deal, as market participants worried about the effects of Fed tapering. After the announcement and reassurance of continued stimulus, the index’s yield-to-worst advanced lower, eventually reaching a low of 2.50% on Oct. 23. Since then, yields have started trending back up and discussions have been renewed surrounding the timing of any action in regard to the Fed’s tapering of its stimulus purchases.

As a result of these trends, corporate issuers are once again looking to time their issuance before any significant rate action occurs. The next FOMC meeting is scheduled for Dec. 17-18, and already we’ve seen issuers such as Microsoft Corp. ($3.25 billion) and Johnson & Johnson ($3.5 billion) come to market with issues spanning maturities from three years to 30 years out. The majority of issuance for these two deals meets the S&P U.S. Issued Corporate Bond Index qualification rules except for the $800 million Johnson & Johnson floating rate notes due 11/28/2016, which, as stated in the index methodology, are excluded for not being fixed rate. The demand for yield is strong and the recent increase in rates has whet the appetite of investors while still remaining attractive to corporate CFO’s. We could see further corporate issuance this year as firms attempt to secure financing before any possible increase in rates may occur. 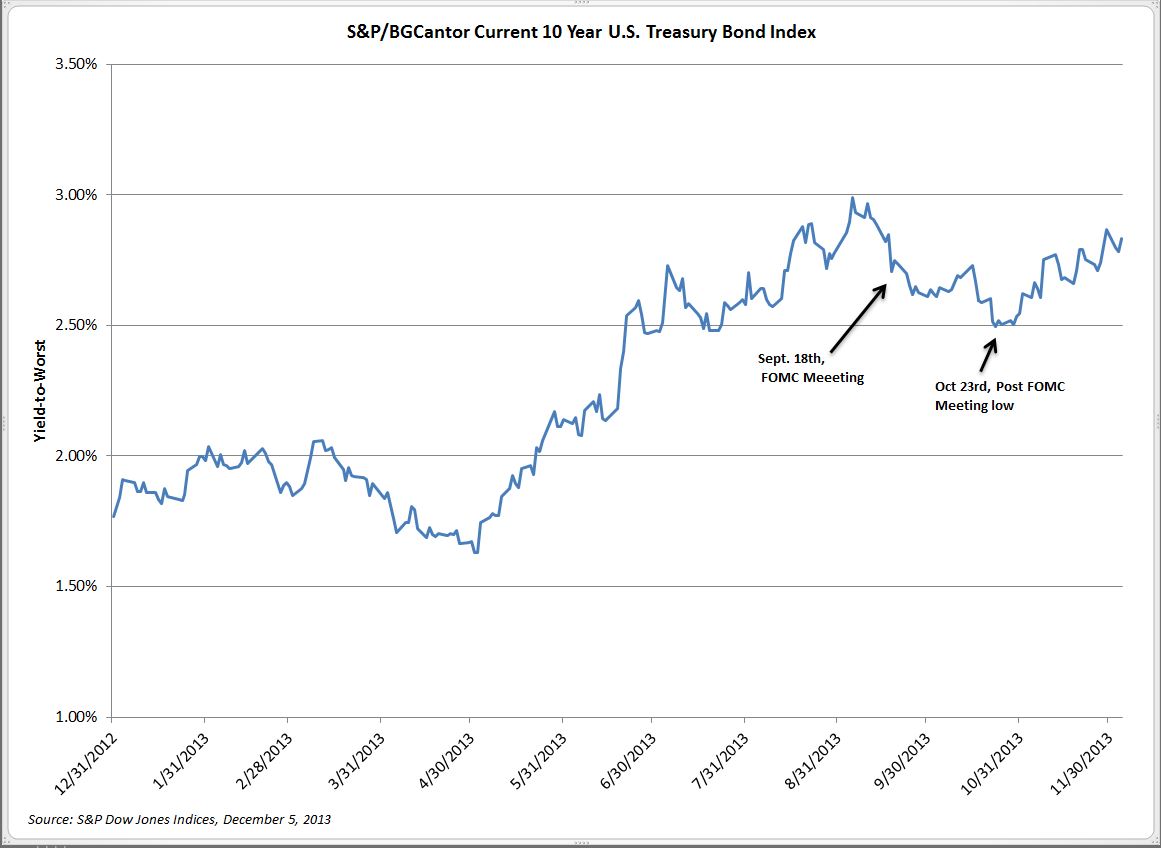