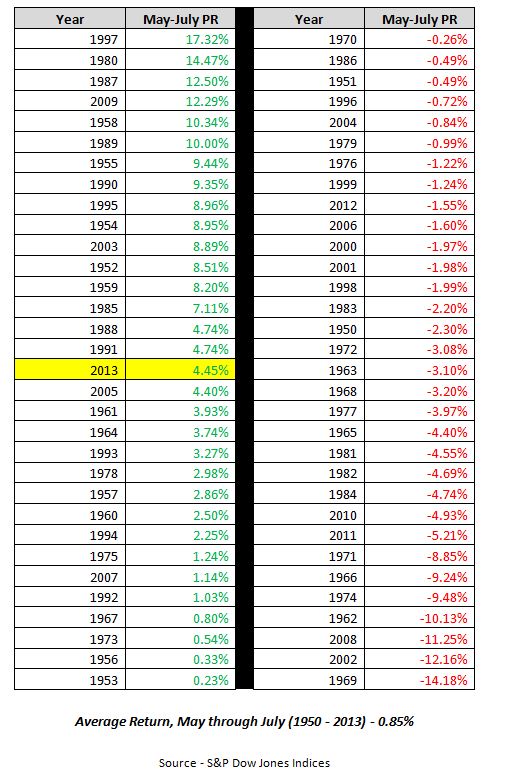 Fund outflows in the municipal bond asset class, in part driven by the Detroit bankruptcy, pushed municipal bond performance down in July according to the S&P National AMT-Free Municipal Bond Index.

Despite strong double-digit gains in the equity markets last year, S&P 500 issues posted record pension and OPEB underfunding in 2012. The double-digit equity gains of 2012 were no match for the artificially low interest rates which vaulted pension liabilities into record underfunding territory. Companies have only 77 cents for each dollar they owe in pensions and only 22 cents for each dollar of OPEB obligations. Overall, pensions and OPEB remain a manageable expense, currently within income and assets levels. Pensions funding should improve since interest rates have risen -> the higher the interest rate used the lower the discounted liabilities.

The full report, “S&P 500 2012 Pensions and Other Post Employment Benefits (OPEB): The Final Frontier”, can be accessed at www.spdji.com/sp500.

Companies continue to shift retirement risk to the individual. The good news for current retirees is that most S&P 500 large-cap issues have enough cash and resources available to cover the expense. The bad news is for future retirees, whose benefits have been reduced or cut and will need to find a way to supplement, or postpone their retirement. The American dream of a golden retirement for baby boomers has dissipated for most.

Legacy pension and OPEB programs will mostly work their way out of the last bastions of the U.S. labor market over the next several decades. For baby-boomers it is already too late to safely build-up assets, outside of working longer or living more frugally in retirement. For younger workers, there is a need to start early, permitting time to compound their returns for their retirement. For individuals, the personal wealth depletion, via lower housing and equity positions, combined with lower pension and OPEB benefits (as longevity and the cost of staying healthy continue to escalate), has left potential retirees with little ability to retire. The current economic reality of strained government programs, the need for additional revenue (taxes), reduced spending (entitlement programs), and higher social costs have heralded a return to the retirement of prior generations: you work for most of your longer life and spend your remaining years in retirement in a reduced lifestyle.  The result is that the American dream of a golden retirement for upcoming baby boomers is quickly dissipating. The current situation leaves few options for a comfortable retirement, and few years for baby boomers to significantly add to their retirement resources, outside of working longer.

Let me put it this way, my teenage kids worked last summer (and this one) and I ‘talked’ them into opening up a Roth IRA, even though they won’t get the money for almost fifty years (I matched their contributions  – think I did good, considering I could have gotten stuck with the entire amount).  It will be difficult for my generation, where many of us are split between our old IRAs, pensions (most being frozen), 401k and savings.  But for the next generation, its looks like it’s all on them.  So they need to start early, and let time compound their early contributions (amazing, I used to worry about their college fund, now I’m trying to help start them off for their retirement – and I’m still working; middle-class is strange, just glad I can do it).