In partnership with the ASX, we recently introduced the S&P/ASX All Technology Index, which, for the first time, brings together ASX-listed companies across a range of industries whose businesses are primarily technology focused. In a market heavily concentrated in banks and natural resource companies, the S&P/ASX All Technology Index provides access to a unique, underrepresented segment of the Australian equities market that has also recently been the country’s fastest-growing sector.

In the past five years, the number of S&P/ASX All Technology Index constituents nearly doubled from 24 to 46, while the total market cap of these companies increased more than fivefold from AUD 17 billion to nearly AUD 92 billion.

As illustrated in Exhibit 2, the S&P/ASX All Technology Index substantially outperformed other major Australian equity sectors and the broader Australian equity market over the trailing one-, three-, and five-year periods ending Dec. 31, 2019. Over the past five years, the index recorded an annualized total return of 17.4% compared with the 9.0% return of the S&P/ASX 200. 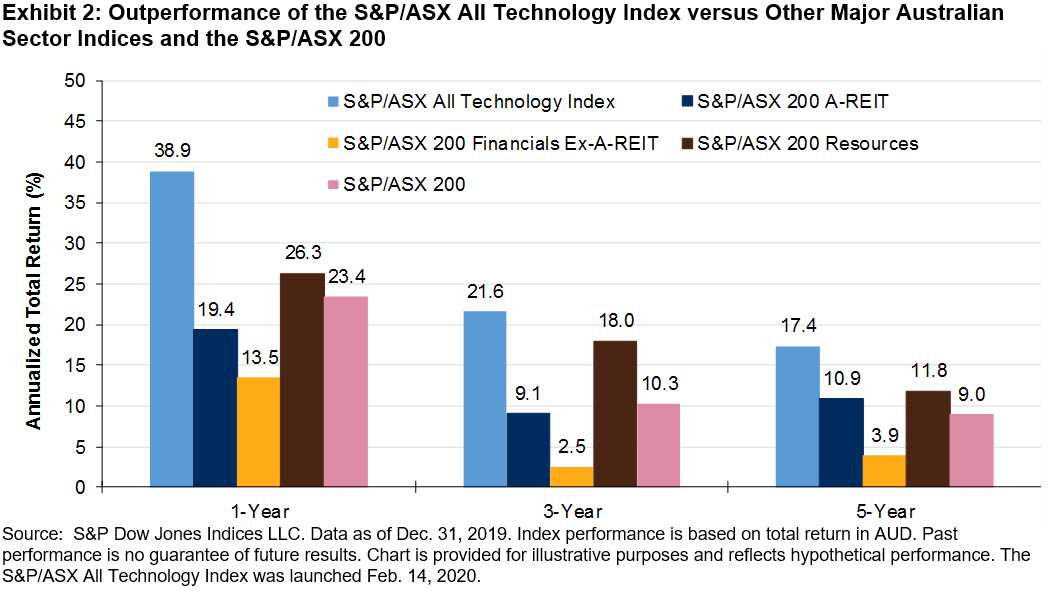 In order to fully capture technology-driven businesses in Australia, we felt it was important to expand the scope of the index beyond the GICS® Information Technology sector. This allows the index to include other innovative technology-related industries such as health care technology and companies operating online marketplaces that are classified in other GICS sectors. Exhibit 3 illustrates the top 10 members of the index as of Dec. 31, 2019.

To learn more about the S&P/ASX All Technology Index, please see our Talking Points that introduces the new index. 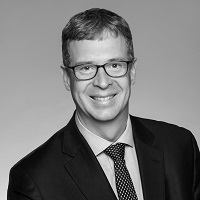 We can identify the average factor exposures of each strategy since January 1995 by viewing their Best Factor Fits (BFF).

The BFF for the S&P 500 Dividend Aristocrats is the following:

…compared to the BFF of the S&P 500 High Dividend Index:

One observation from the above factor comparison is their similar exposure to Low Volatility.  From there, the differences between the strategies become apparent. To begin, only the S&P 500 Dividend Aristocrats has exposure to Quality. Secondly, the S&P 500 High Dividend Index has a larger exposure to Value and Low Momentum.

So, let’s focus on the differences.  As of November 29, 2019, the following is the performance of each of these factors since January 1995.

How did the individual factors perform during different market regimes when compared against the S&P 500 (benchmark) according to Optimal Asset’s Factor Allocator tool? 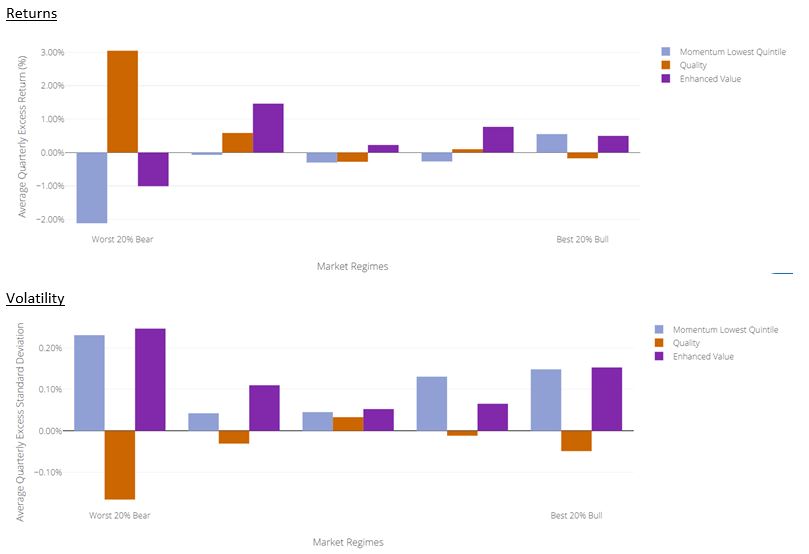 One observation is the Factor Allocator indicates Quality’s returns were relatively strong during weak market environments while Low Momentum and Value provided relatively poor returns in this same environment. Another observation provided by the Factor Allocator tool is Low Momentum and Value provided elevated volatility in all market regimes while Quality provided some reduced volatility during periods of weak markets.  One could argue based on this data that the S&P 500 High Dividend Index consisted of less defensive factors when compared to S&P 500 Dividend Aristocrats.