SPIVA®, which stands for S&P Indices versus Active, reports on the performance of actively managed funds against their respective category benchmarks, such as the S&P 500® in the U.S. and the S&P/BMV IPC here in Mexico. The results are impressive and consistent across the world: indices tend to outperform the majority of actively managed funds, mainly over the over the mid- to long-term investment horizons.

The SPIVA Latin America Mid-Year 2019 Scorecard showed that over the one-year period ending on June 30, 2019, 64% of actively managed funds in Mexico underperformed the S&P/BMV IRT, the total return version of the flagship S&P/BMV IPC. In addition, the percentage of active funds underperforming the benchmark increased over longer-term investment horizons; 82%, 90%, and 86% of active managers were not able to beat their benchmark over the 3-, 5-, and 10-year horizons, respectively. One should notice that active fund managers do not always lag the benchmarks, especially over the short-term horizons. A clear example was in the year-end 2018 report, when more than 58% of Mexican active funds outperformed the S&P/BMV IRT. The numbers suggest that active managers’ outperformance relative to the benchmark may exist, but rarely.

Furthermore, it is challenging for managers to consistently remain at the top of their categories, especially over longer horizons. The Latin America Persistence Scorecard demonstrates that top-performing active funds have little chance of repeating that success in subsequent years.

The SPIVA report does not intend to explain why underperformance exists, rather it is meant to act as a scorekeeper. That said, we could argue that many active managers do not have the skill to beat their benchmarks consistently that they may claim to have. It is difficult to time the market with consistent success, and the trading costs associated with excessive trading from active managers does not help fund performance. Furthermore, SPIVA uses net-of-fees returns of active funds, and numerous studies[1] show that the fee drag in fund returns can be substantial.

SPIVA can help investors make informed decisions about whether to use an active manager or invest in an index-based fund such as an ETF. It also reminds investors that using past performance as the main guidance in fund selection could be misleading due to the lack of performance persistence among actively managed equity funds.

This article was first published in Fortune Mexico Magazine December 2019. 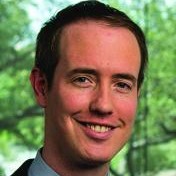 The US stock market has delivered an average annual return of around 10% since 1926.[1] But short-term results may vary, and in any given period stock returns can be positive, negative, or flat. When setting expectations, it’s helpful for investors saving for retirement to see the range of outcomes experienced historically. For example, how often have the stock market’s annual returns aligned with its long-term average?

Exhibit 1 shows calendar year returns for the S&P 500 since 1926. The shaded band marks the historical average of 10%, plus or minus 2 percentage points. The S&P 500 had a return within this range in only six of the past 93 calendar years. In most years, the index’s return was outside of the range—often above or below by a wide margin—with no obvious pattern. For investors, the data highlight the importance of looking beyond average returns and being aware of the range of potential outcomes.

Tuning in to Different Frequencies

Despite the year-to-year volatility, investors can potentially increase their chances of having a positive outcome by maintaining a long-term focus. Exhibit 2 documents the historical frequency of positive returns over rolling periods of one, five, and 10 years in the US market. The data show that, while positive performance is never assured, investors’ odds improve over longer time horizons. 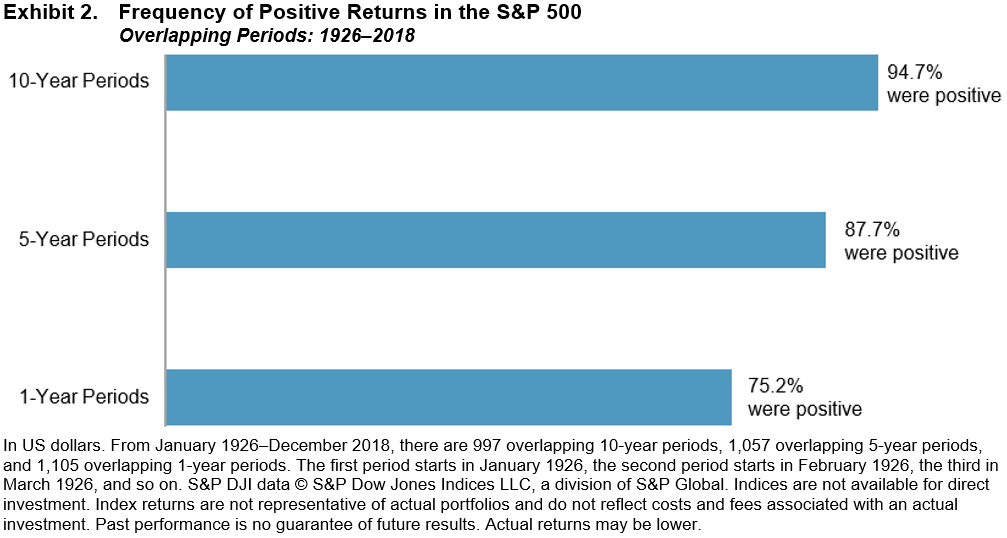 While some investors might find it easy to stay the course in years with above average returns, periods of disappointing results may test an investor’s faith in equity markets. Being aware of the range of potential outcomes can help investors remain disciplined, which in the long term can increase the odds of a successful investment experience. What can help investors endure the ups and downs? While there is no silver bullet, understanding how markets work and trusting market prices are good starting points. An asset allocation that aligns with personal risk tolerances and retirement-planning goals is also valuable. By thoughtfully considering these and other issues, investors may be better prepared to stay focused on their long-term goals during different market environments.

There is no guarantee investment strategies will be successful. Investing involves risks, including possible loss of principal. Diversification does not eliminate the risk of market loss.

All expressions of opinion are subject to change. This article is distributed for informational purposes, and it is not to be construed as an offer, solicitation, recommendation, or endorsement of any particular security, products, or services.

The S&P Composite 1500 measures the U.S. equity market by combining three world-renowned benchmarks – the S&P 500®, S&P MidCap 400®, and S&P SmallCap 600® – which together encompass approximately 90% of U.S. equity market capitalization.  With 2019 in the rear-view mirror, it is obvious that last year was extremely positive for U.S. equities:  the S&P 1500 recorded its best calendar year total return since 2013, up 30.90%.  While this performance may not be surprising given the healthy gains posted by most size, sector, and style segments, it reflects a few broader market trends. 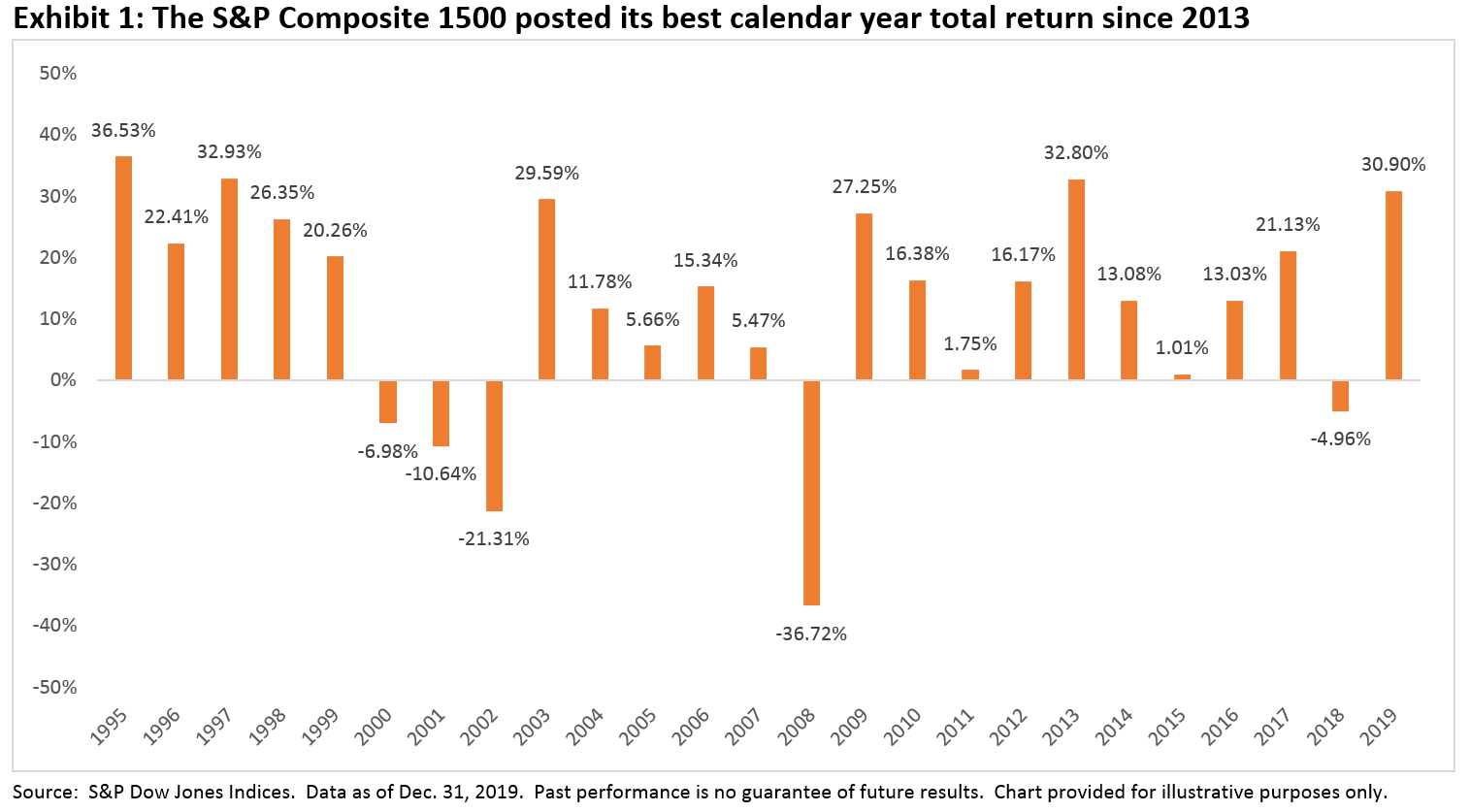 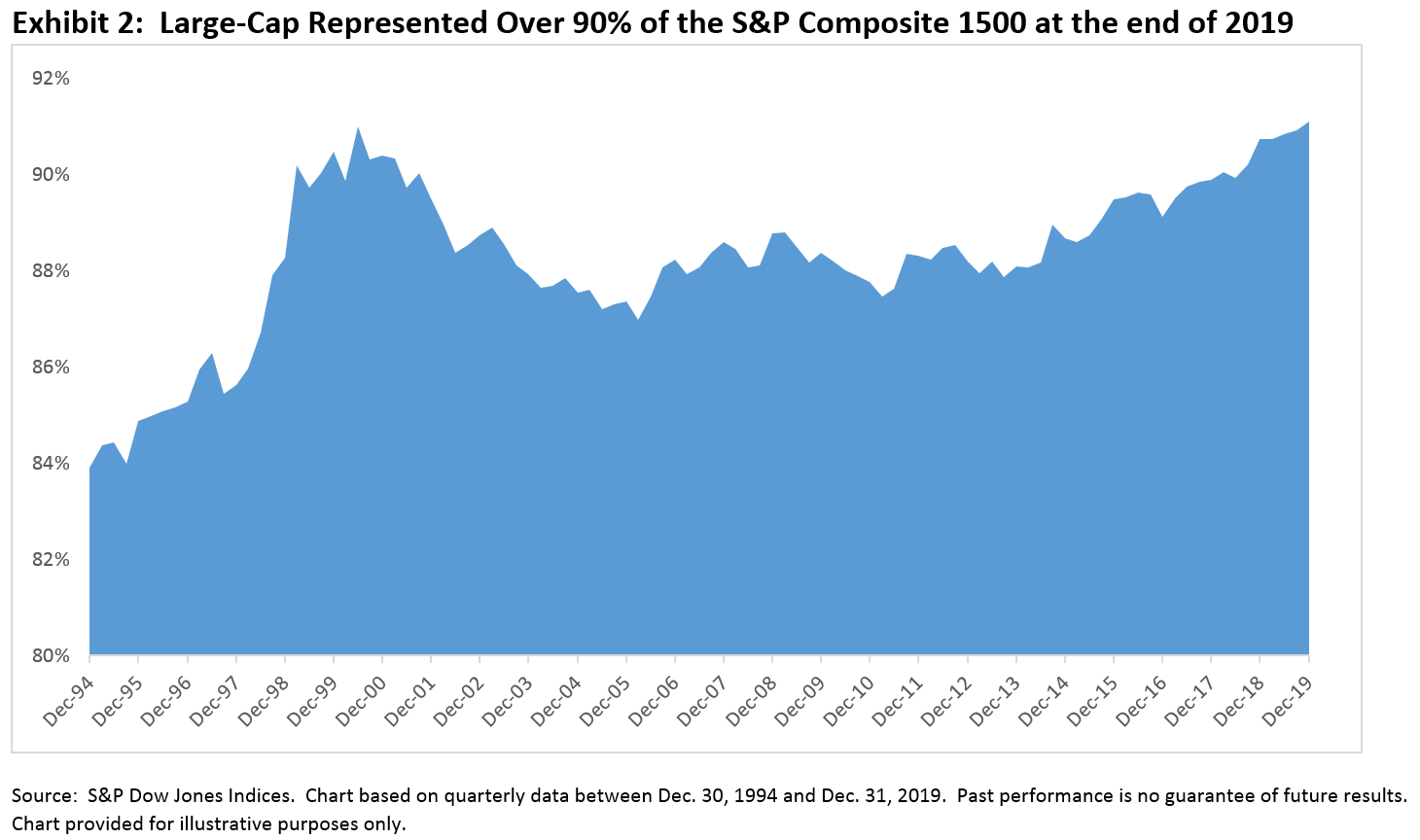 More broadly, and repackaging an infographic from our daily dashboard (I highly recommend subscribing to ensure you receive witty market commentary direct to your inbox) 2019 was positive for all the S&P 1500 sectors and industries.  Not bad when you consider many people’s market outlook at the start of the year! 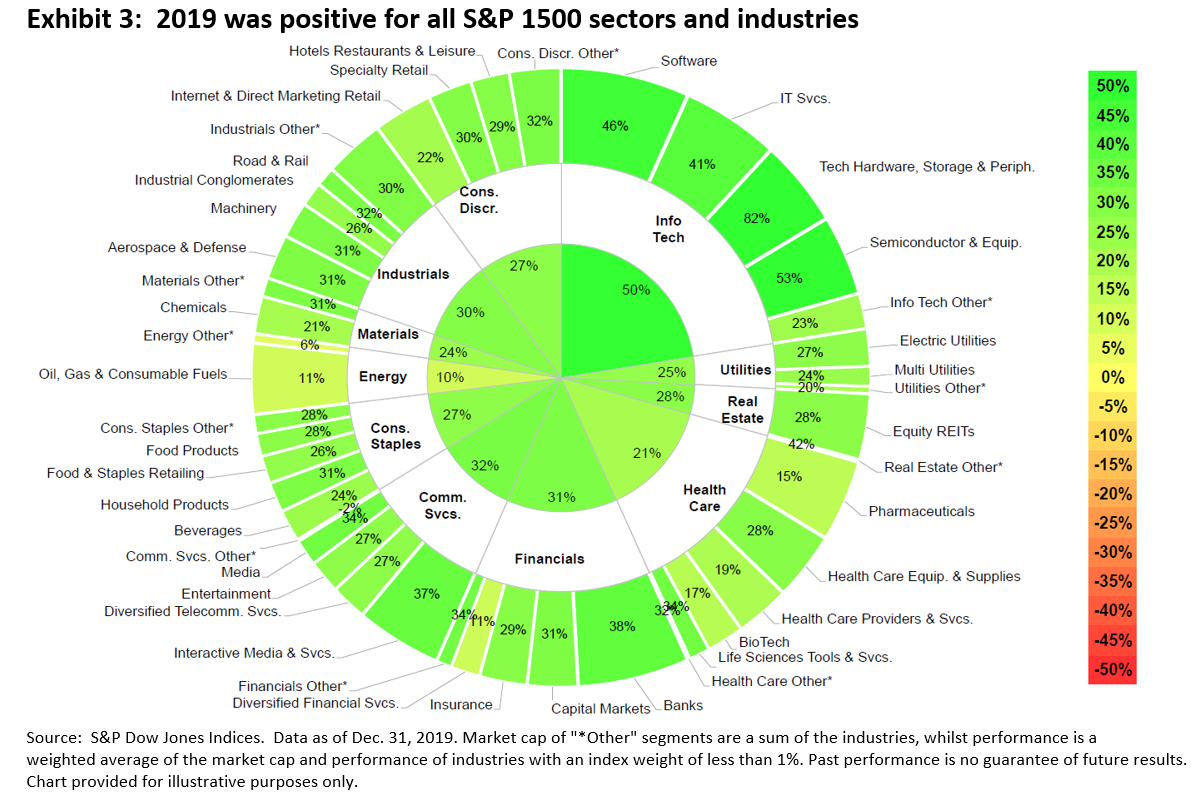 Finally, some have argued that 2020 may be the year of the stock picker based on a recent decline in correlations.  However, as we have pointed out repeatedly, dispersion is a better measure of active management’s alpha opportunity: Exhibit 4 highlights that a greater proportion of active domestic U.S. equity managers typically underperformed the S&P 1500 when dispersion was lower.

Given the below-average dispersion in the S&P 1500 last year, most active managers may find it challenging to outperform the U.S. equity market benchmark. 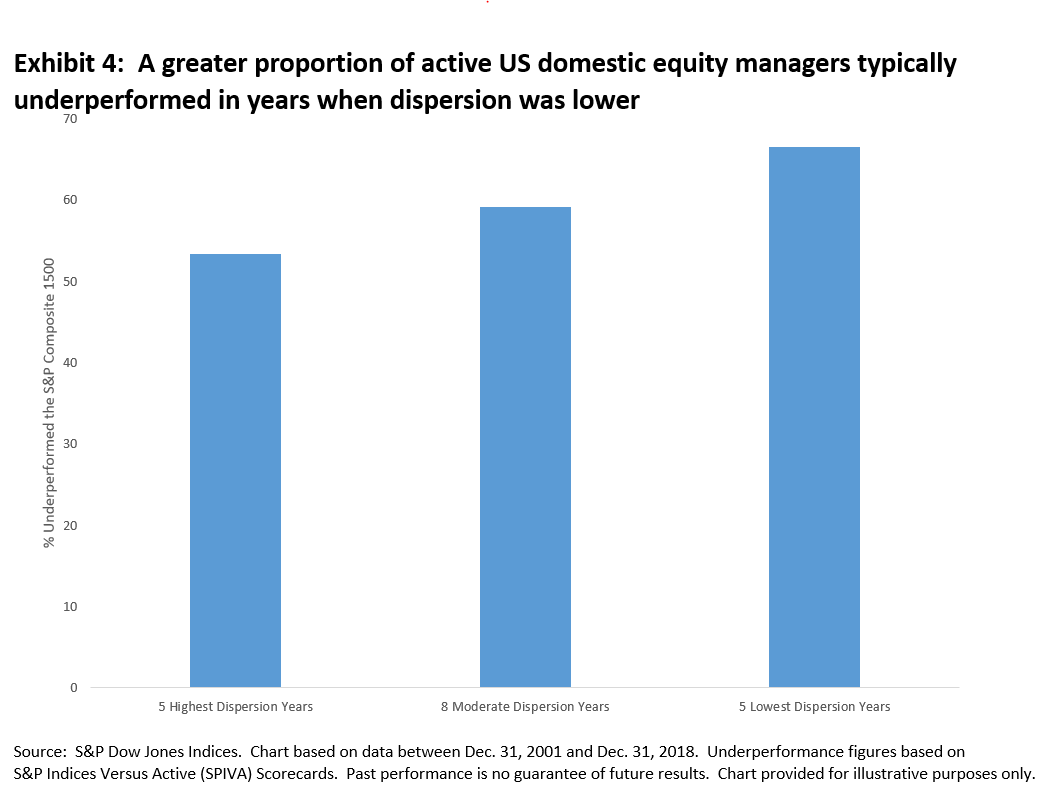