The 2010s proved to be a disappointing decade for the S&P Emerging BMI, at least in relative terms. With a few weeks to go until the finish line, the index stands at a total return of 50% in U.S. dollars, compared with 160% for the S&P Developed BMI, as of Dec. 16, 2019. Although emerging markets did show signs of catching up in 2016 and 2017, as Exhibit 1 shows, overall the ratio between the two indices plots a steady underperformance over the past 10 years.

In the early 2000s, the BRICs (an acronym for Brazil, Russia, India, and China) were viewed as the emerging economies to watch over the coming decades. However, only China has consolidated its place as a true heavyweight, with the underperformance of other major developing markets acting as a drag on benchmark returns.

Our broadest measure of the Chinese equity market is the combination of the S&P Total China Domestic BMI (a broad universe of Chinese securities) plus the S&P China A Venture Enterprises Index of smaller Shenzhen-listed firms. Based on these indices, the total capitalization of the Chinese equity market has grown seven-fold since 2006, while the number of listed stocks quadrupled. Exhibit 2 plots the rise in number and capitalization of Chinese equities in the past 13 years.

China is a special case in several respects. While emerging markets are usually dominated by banks, commodity-related firms, and local consumer champions, China’s boom in equities has encompassed a wider and more balanced range of sectors, with the result that (as shown in Exhibit 3) the Chinese market has been less sectorally concentrated than is typical for so-called emerging or frontier markets.

Rather than price appreciation, the significant driver in the growth of China’s equity markets has been introductions of companies to list on the exchanges—particularly in the tech-heavy sectors. Evidencing this remarkable growth, as Exhibit 4 illustrates, today there are more Chinese Information Technology and Communication Services stocks than U.S. ones. 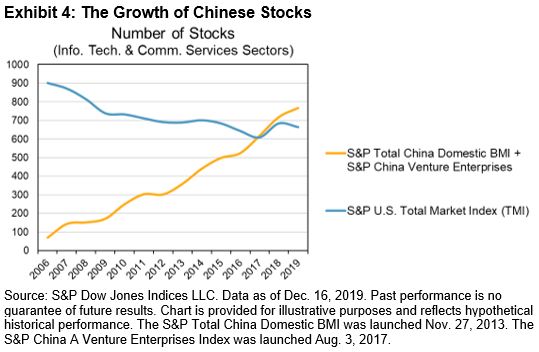