The S&P/BMV Index Series combines the local market expertise of the Mexican Stock Exchange (the BMV) with the resources and reach of one of the most prominent independent global index providers, S&P Dow Jones Indices (S&P DJI). This productive collaboration officially began in May 2015 and adheres to international standards. The relationship also provides the opportunity to create new indices across different asset classes in the Mexican market.

We are constantly designing new indices to serve as innovative and practical tools for local and global investors. To ensure the indices are replicable and investable, we incorporate feedback from market participants. Over the past four years, we have launched a complete suite of single-factor indices. More recently, we debuted the first multi-factor strategy, the S&P/BMV IPC Quality, Value & Growth Index. These indices could serve as the basis for financial products like ETFs, among others, to be incorporated into portfolio strategies.

In our commitment to ESG, S&P DJI has collaborated with the Consejo Consultivo de Finanzas Verdes (CCFV). This council aims to promote the financing of green projects and generate common sustainability standards for market practices in Mexico. Together, S&P DJI and the BMV selected SAM, a highly reputable Swiss investment specialist focused exclusively on sustainable investing, as the official score provider for the development of ESG-based S&P/BMV Indices.

In the ongoing global debate about active versus passive investment, S&P Dow Jones Indices has played a major role by publishing the SPIVA® and Persistence Scorecards for Latin America. These reports include historical performance measurements of actively managed equity mutual funds in Mexico compared with the S&P/BMV IPC[1] over different time horizons.

S&P Dow Jones Indices congratulates the BMV on its 125th anniversary. Our commitment to Mexico and the BMV is to continue working on new, innovative indices for the country’s markets.

Amid the turbulent markets of 2019, the S&P Economic Cycle Factor Rotator Index has been holding steady. The index rotates its allocation between four indices benchmarked to factors—momentum, value, quality, and low volatility—seeking to pick the relevant factor for each phase of the business cycle. The index uses a signal that is based off the Chicago Fed National Activity Index, an economic growth indicator for the U.S. In 2019 alone, the index was allocated to each of the four factors, signaling that the business cycle had some unpredictability, with almost all micro cycles covering a slowdown, expansion, contraction, and recovery.

Historically, the index has regularly cycled through each of the factors in order to adapt to changing market conditions and allocate to the appropriate factor (see Exhibit 1).[1] The most recent allocation switch occurred in June, when the index allocation changed from low volatility to value, indicating that the economy shifted from a period of contraction to one of recovery. The fact that the index remained allocated to value even after rate cuts this year in July and September tells us that this strategy works to guard against significant movements in the market. Despite the market-wide sell-off at the end of 2018, the index has recovered most of the lost value throughout 2019. 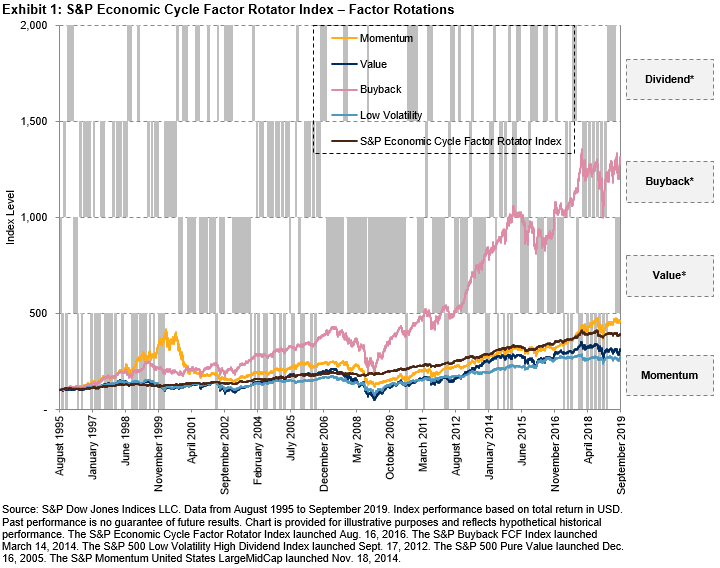 In Exhibit 2, we see that, with the exception of last year, the S&P Economic Cycle Factor Rotator Index has not always outperformed its subcomponents. However, by allocating to the different indices, the index maintains a lower risk level while still having the ability to participate in an upward-trending market. As a result, the index achieved higher risk-adjusted returns from September 2009 to September 2019 relative to its sub-components (see Exhibit 3). When we look at the index’s one-year returns, we see that the index and all of its subcomponents had negative returns; value, buyback, low volatility, and momentum had returns of -16.45%, -13.43%, -12.28%, and -2.65%, respectively. It’s evident that the rotation aspect of the index helped protect the index against larger losses, since the S&P Economic Cycle Factor Rotator Index outperformed all of its subcomponents with a return of -2.51% in 2018. Since the index was mostly allocated between buyback and momentum in 2018, we know that the index returns were mainly driven by its momentum component. 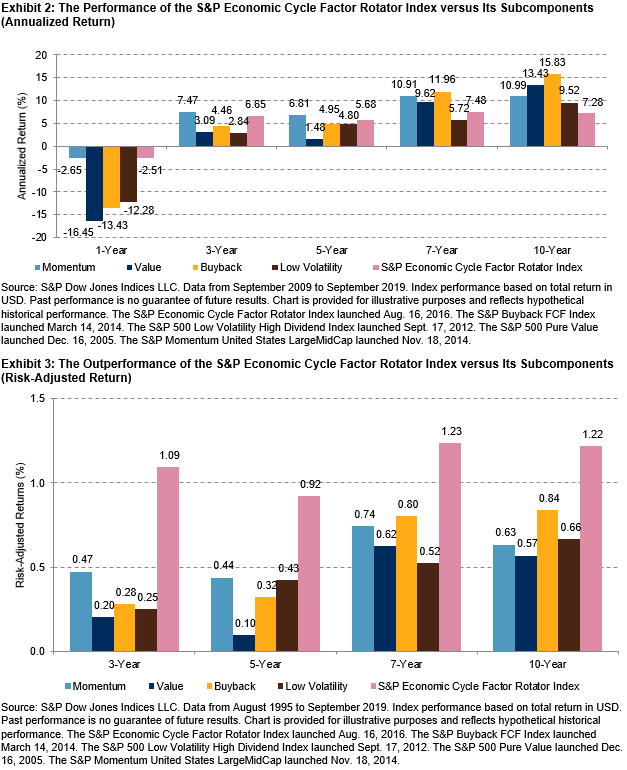 By design, the index has a 6% risk control mechanism built in that helps it maintain a constant level of volatility, which in turn enables it to participate in the upside and offer downside protection relative to the S&P 500 Daily Risk Control 5% Index. As seen in Exhibit 4, when compared with the S&P 500 Daily Risk Control 5% Index, we see that the index captured 116% of the upside and 61% of the downside. The capture ratio of 190% shows us that the up-market performance more than compensated for the down-market performance, and that the index outperformed the market overall. 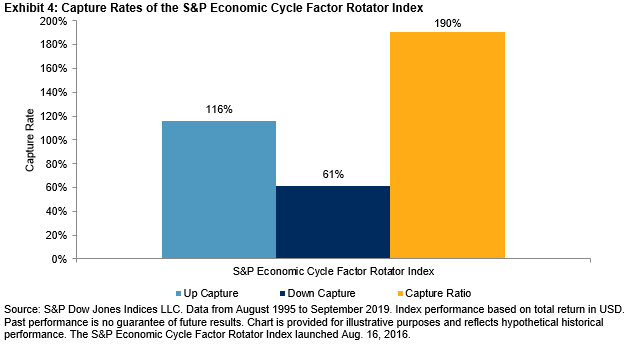 The S&P Economic Cycle Factor Rotator Index has shown that it is effective for adapting to changing market conditions with its ability to allocate to different indices depending on phases of the business cycle. Over the studied period, it not only generated higher returns with lower risk, but also captured more upside and less downside in various market conditions. 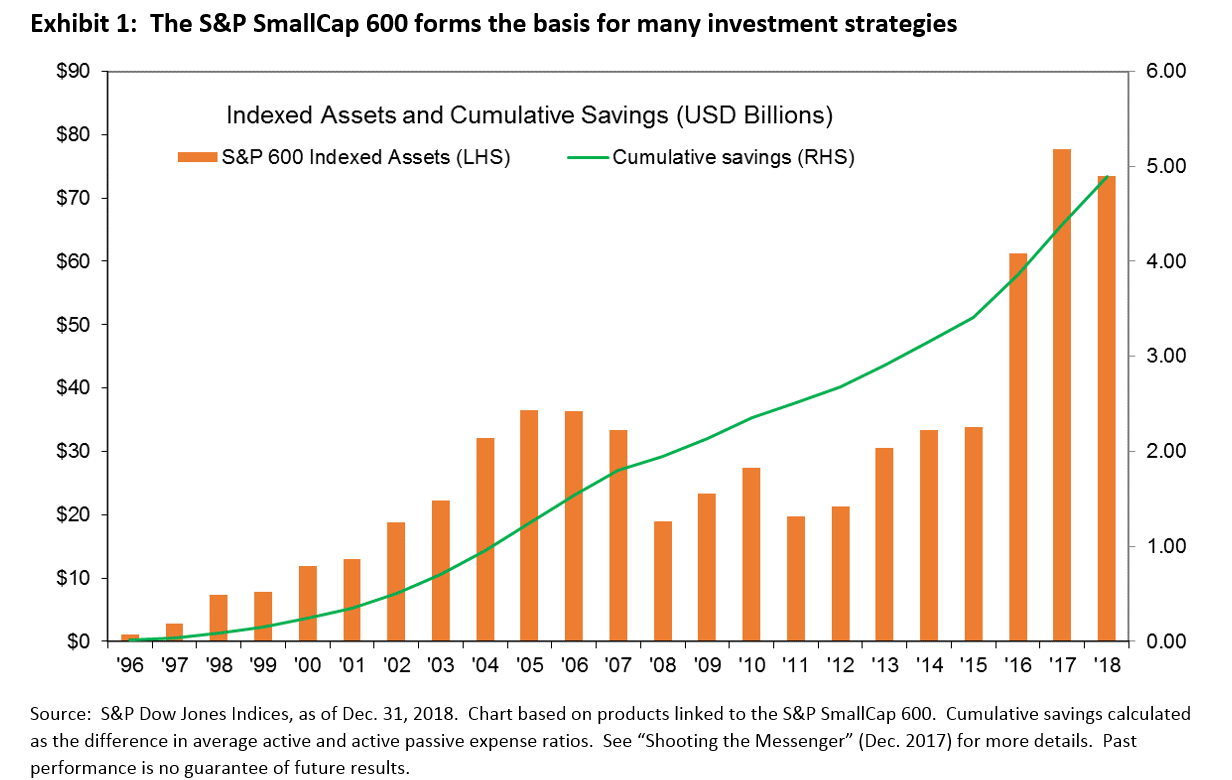 One of the principal reasons for the growing popularity and awareness of the S&P SmallCap 600 has been its historical performance.  Index construction matters in U.S. small-caps: the S&P 600’s profitability criterion gives it a quality bias, which helped it to consistently outperform other small cap indices such as the Russell 2000 and made it a harder benchmark to outperform for active managers.

More recently, for those seeking to take shelter from the trade winds buffeting the blue-chip, internationally diversified names leading the S&P 500, small-cap stocks can offer a safe harbor, or simply purer exposure to the U.S. economy.  Smaller stocks typically have a higher proportion of their revenues generated in home markets, and the S&P SmallCap 600 has a strong domestic bias compared to the S&P 500.  The performance of the small-cap index over the last 12 months illustrates its close connections to the U.S. economic outlook.

After concerns over U.S. economic growth and future Fed policy weighed on the S&P SmallCap 600 towards the end of 2018, higher domestic revenue exposure provided a degree of insulation from the tariffs, which, in turn, helped the index to post its best ever start to the year (+15.45% through the end of February). The index has since been tested by periodic bouts of uncertainty centering around the health of the U.S. economy, comments by Jerome Powell, and actions by the Federal Reserve. 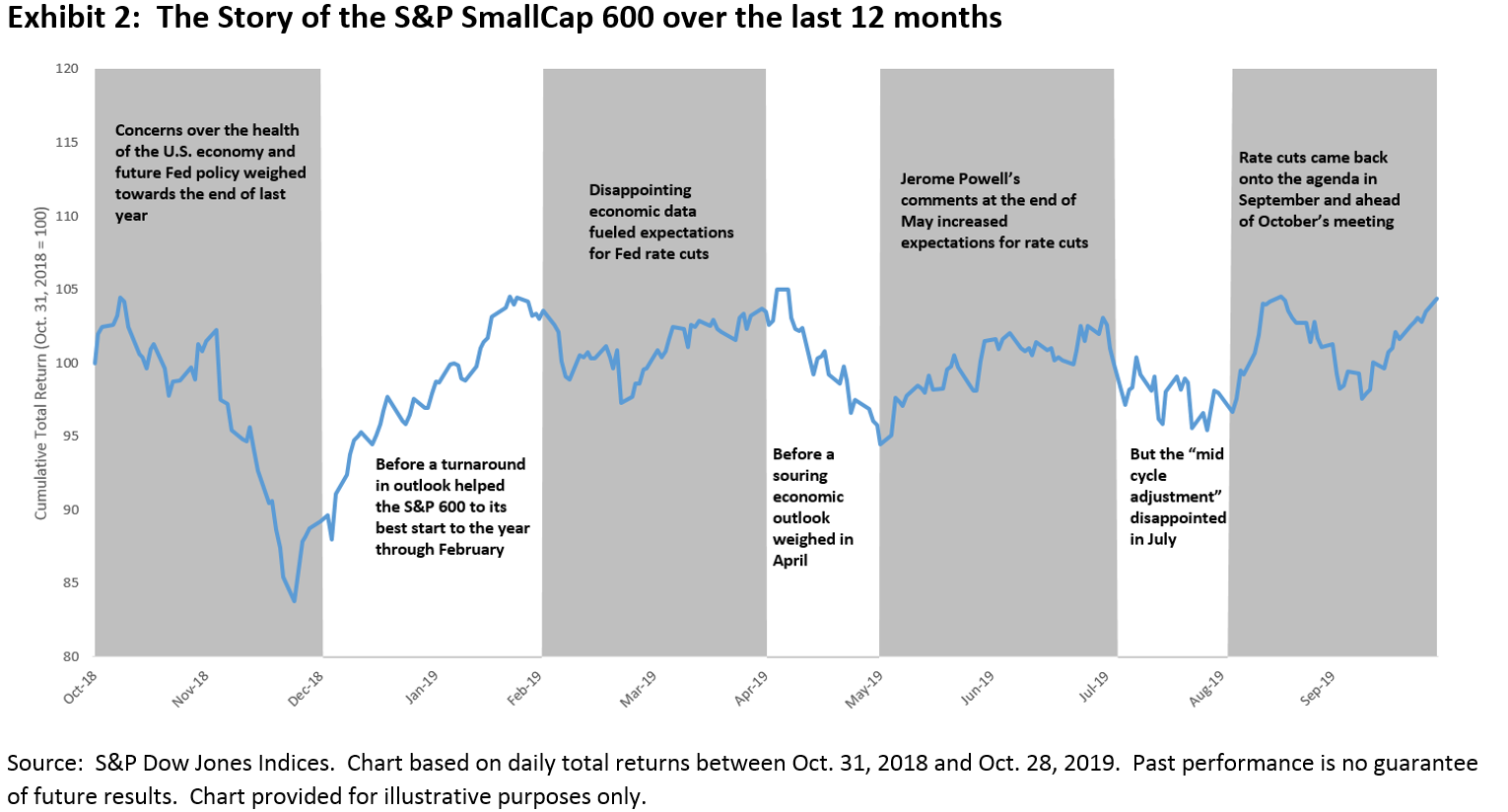 Since it launched on October 28, 1994, the S&P SmallCap 600 has become a popular way to access the small-cap equity space.  Its outperformance over other small cap indices is a testament to the fact that index construction matters in small cap equities.  Here’s to another 25 years!

The third quarter was a difficult one for the Latin American region. Meanwhile, it was a mixed bag for global markets—the U.S. ended on a slightly positive note, Europe on a negative one, and Japan also on a positive one, with global markets remaining nearly flat.

The S&P 500® ended the quarter up 1.7%, the S&P Europe 350® posted almost the exact opposite with -1.6%, while Japan’s S&P/TOPIX 150 was up nearly 4%. Latin America’s blue-chip index, the S&P Latin America 40, was down 6.3%. Many internal factors contributed to the region’s underperformance, including reductions in exports, contractions in the industrial and service sectors, soft labor markets, political uncertainty, a slump in commodities prices, and low consumer sentiment. External factors also weighed heavily on the region, primarily the uncertainty surrounding trade negotiations between the U.S. and China.

While all Latin American markets ended in the red for Q3 2019, when comparing with USD-based returns, we noticed that, with the exception of Argentina and Peru, all markets in the region outperformed in USD terms or were flat in local currency terms. This is an example of how currency depreciation can have an impact on performance. The biggest differences were seen in Brazil and Colombia, with the S&P Brazil BMI posting a return of -3.9% in USD but 4.2% in BRL, and, the S&P Colombia Select Index returning -5.7% in USD but a decent 2.3% in COP. Mexico’s headline benchmark, the S&P/BMV IPC, generated a -2.6% total return in USD but was nearly flat in MXN (0.2%). 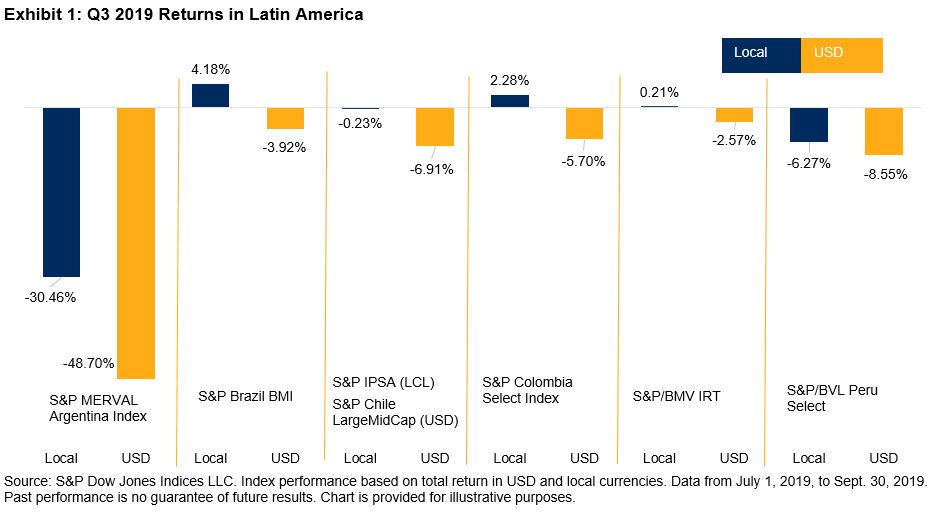 Interestingly, sectors seemed to offer a clearer picture of the region. It was certainly a tough quarter for most economic sectors, although we still saw defensive sectors like Health Care and Consumer Staples were still able to post positive returns. Real Estate, Consumer Discretionary, and Information Technology also ended the quarter in positive territory. The Materials sector, which includes mining companies, was the worst-performing sector, followed by Financials.

As Exhibit 1 shows, Brazil was the best performer in the region for the quarter. Not surprisingly, most of the best-performing stocks were Brazilian, with BRF S.A., a Consumer Staples company, finishing at the top of the list among the constituents of the S&P Latin America 40, which seeks to track the performance of the leading 40 companies in the region. In terms of indices, the S&P/B3 Momentum Index, which focuses on the top companies in the Brazilian market that show persistence in their relative performance, as measured by their risk-adjusted price momentum score, had the best return for the quarter at 14.5%.

In Mexico, the momentum index was also a top performer among factor strategies. The S&P/BMV IPC CompMx Short-Term Momentum Index returned nearly 4%, significantly higher than the benchmark S&P/BMV IPC’s return (0.2%). However, in Mexico, FIBRAS ruled, and the S&P/BMV FIBRAS Index had an outstanding quarter (10.5%), as much of its returns are attributable to the high yields FIBRAS generate. As of Sept. 30, 2019, the indicated dividend yield for the S&P/BMV FIBRAS Index was 8.1%.

Peru and Colombia had difficult quarters, with Peru being the worst performer of the two. However, in both markets the best-performing stocks were from the Electric Utilities industry, proving the Utilities sector’s defensive potential during challenging market environments.

As we enter the last quarter of the year, many are already looking forward to 2020. Most economists’ consensus is that Latin America will continue to struggle with market volatility, stagnant economic growth, and political uncertainty. As an optimist, I think there are always investment opportunities in the short- and long-term horizon, despite the tough times. In fact, the diversity of our leading country and regional indices shows exactly that.

Despite still ending the quarter higher, Q3 2019 was relatively subdued across asset classes when compared to the stellar performance we saw in equities in Q1 and Treasuries and gold in Q2. Exhibit 1 shows that the gains captured in Q1 and Q2 continued to compound in Q3, with the YTD performance of the S&P MARC 5% (ER) reaching 11.2%. As of Q3’s end, all components of the S&P MARC 5% ended in positive territory for each of the three quarters of 2019.

Looking at the index allocations from the beginning of Q3 2018 to the end of Q3 2019 (see Exhibit 2) we see that, while the mix of assets has changed significantly throughout this time, with equities taking a less prominent role due to the volatility seen at year-end 2018, the index continued to be over 100% allocated across the various asset classes at least 95% of the time. Despite Q4 2018’s volatility, the index only dropped below 100% on 15 days over the past year, keeping the strategy allocated to its underlying asset classes and not cash.

During the 64 days in Q3 2019, we can see that for any of the rolling 252-day periods, the return of the S&P MARC 5% (ER) would have been positive despite the inconsistency of returns in most of its components. It’s also worth noting that across this period of time, the lowest rolling 252-day return for the S&P MARC 5% (ER) was 8.6% and the highest return was 13.4%—with an average return of 11.4%.