Diwali, the Festival of Lights, Illuminates the Glistening Qualities of Gold

Diwali, the Festival of Lights, Illuminates the Glistening Qualities of Gold

In India, the festival of lights known as Diwali brings with it a seasonal uptick in gold imports. A feature of this renowned festival involves the exchange of gifts among friends, families, and colleagues. The most popular gift to give during the festival is gold. The propitious sentiment toward the precious metal makes it a perfect gift during this time. Jewelry is also prominently worn by families throughout the five-day festival, making gold an integral piece of this ancient tradition.

Gold tends to shine bright during the second half of the year as demand picks up. It is estimated that Diwali accounts for approximately one-fifth of annual gold purchases in India—more than any other time of the year. Jewelers and gold coin dealers in India frequently see a spike of 20%-30% in sales leading up to the festival. India is the second-largest consumer of gold after China, although they are close in size, with each accounting for approximately 30% of net global imports of the yellow metal in 2017. Gold is the second-largest import in India after crude oil, illustrating how important the country is to the global gold market and likewise how important it is for Indian consumers to appreciate the global supply/demand dynamics of gold. 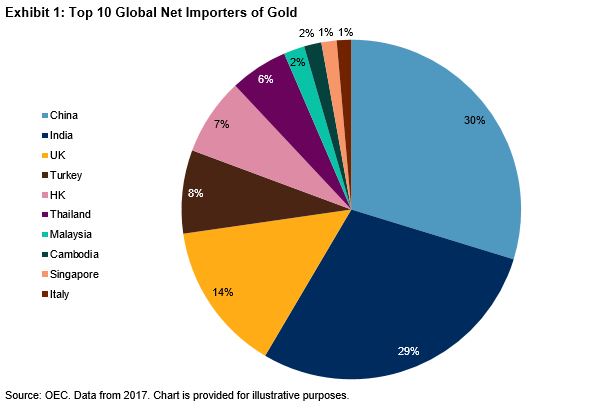 The consumption of gold during the Diwali festival and peak wedding season running from August to December is unlike anywhere else in the world. This year, Diwali demand will compete directly with a favorable cyclical environment for gold investment. Gold has been one of the best-performing commodities this year. As of Sept. 30, 2019, the S&P GSCI Gold was up 14.21% YTD and on par with the S&P 500®, which was up 18.74% YTD. Historically, the metal tends to perform well in times of global economic uncertainty, low interest rate regimes, and periods of U.S. dollar weakness. In an environment in which negative-yielding government debt is only increasing, investors have shown their willingness to allocate a larger portion of their portfolio to gold, for which there is no yield that could turn negative. Data from the World Gold Council suggests that investor and central government demand for gold has grown at a faster pace than jewelry demand through the first six months of this year. 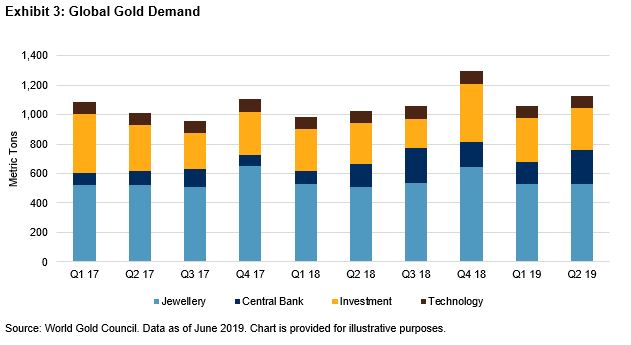 The Indian gold market has shown its resilience even when import taxes are raised, as they were in July of this year, from 10% to 12%. Gold prices simply marched higher, as can be seen by Exhibit 4. There was a similar outperformance in 2013, the last time India raised import tax duties. What is interesting about 2013 is the S&P GSCI Gold saw a drastic move lower on the year, down almost 30%, while local gold prices in India moved less than half that amount. A tax increase can usually be seen as a headwind for demand, but it was overcome by the sheer force of gold buying in India. This year, local gold prices in India have outperformed the S&P GSCI Gold, albeit not as pronounced as in 2013. Regardless, the cultural significance of gold in India provides a firm base for demand and prices. 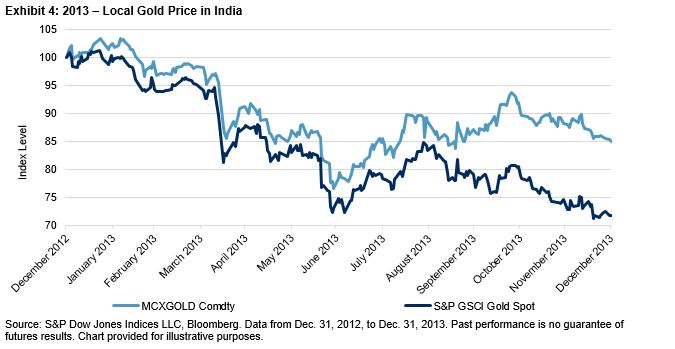 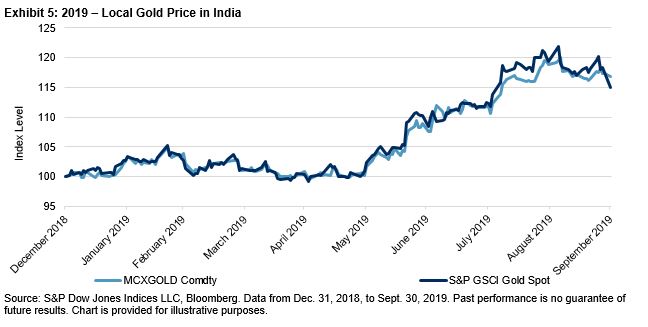 Suppose that I buy a popular exchange traded fund (ETF) tracking the S&P 500® today, leave it in my brokerage account for 20 years, and then sell it.  What return should I expect?  The answer, obviously, is that my return should reflect the movements in the S&P 500 (net of fees) over my 20-year holding period.  That this actually happens is a remarkable thing, and no less remarkable for being unappreciated.

The S&P 500, after all, is just a list of stocks, and its path depends upon the weighted average fluctuation in their prices.  The return of my ETF depends upon what someone is willing to pay me at whatever time I decide to sell.  That these two returns are the same is not the gift of a benevolent Providence.  It happens for two distinct reasons.

Second, popular ETFs and indices are widely scrutinized by the investment and journalistic communities.  If something looks “off,” a news story or a cacophony of investor queries may follow.  This scrutiny helps to ensure that both index and ETF deliver on their objectives (in the S&P 500’s case, to reflect the most important companies in the U.S. stock market and, in the ETF’s case, to hold a portfolio tracking them).  Problems in a less-scrutinized product will be noticed less quickly, if at all.

Index funds are sometimes criticized for failing to promote market efficiency since, at the stock level, efficient pricing depends on the ability of fundamental analysts to assess firm values accurately, and index funds don’t do fundamental analysis.  For the market as a whole, however, trading in index-linked instruments is orders of magnitude greater than trading in individual stocks.  One investor’s opinion of the proper value of the market as a whole is, a priori, no less valuable than another investor’s opinion of the proper value of Microsoft or Amazon.

“Markets work best,” writes The Wall Street Journal’s Jason Zweig, “when they are both deep and wide, integrating sharp differences of opinion from many people into a single price at which investments can trade.”  Arbitrage and scrutiny forge a connection between prices at the macro and micro levels, improving the efficiency of the whole. 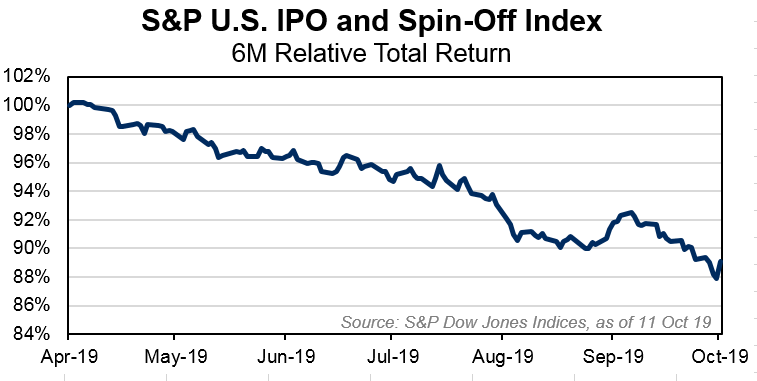 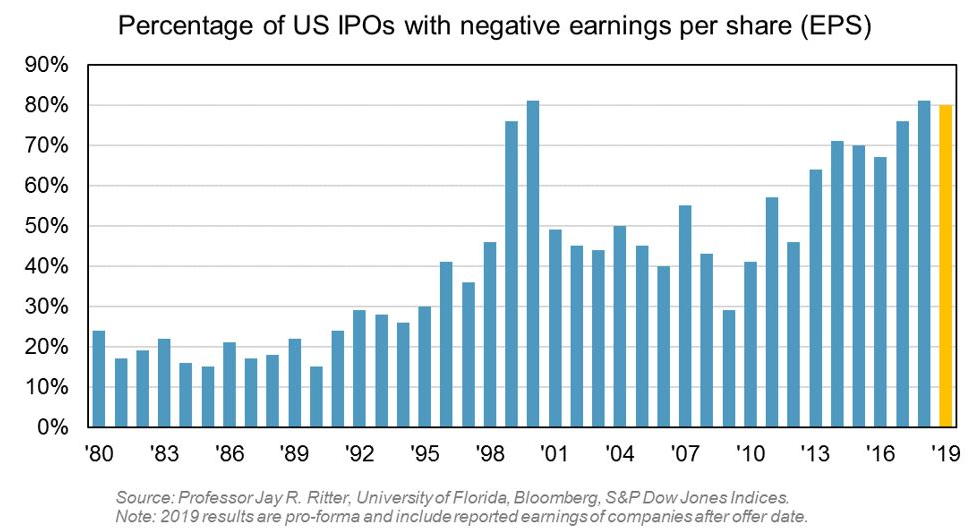 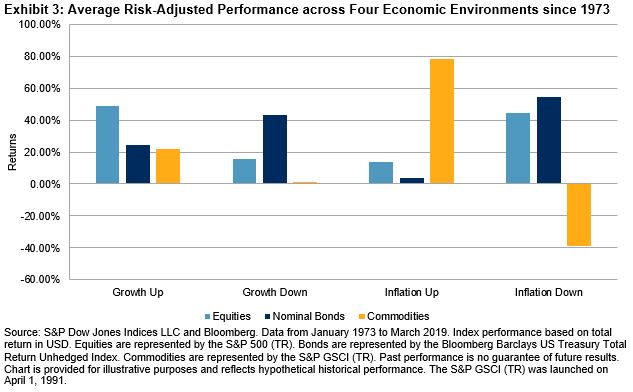