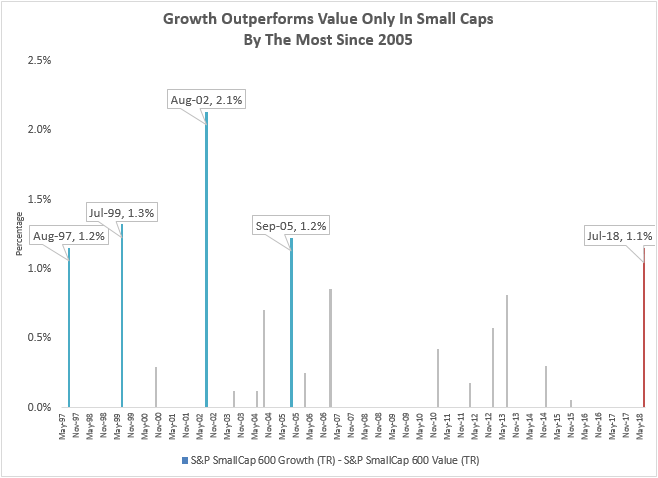 While all eleven sectors in the S&P 600 were positive in July, the best performing sectors were industrials, materials and health care, up a respective 6.6%, 4.4% and 3.7%.  Also industrials and health care are the two most overweighted sectors in small caps when comparing growth to value.  Health care has 13.2% more weight in growth than value in small caps, while small cap industrials weigh 3.6% more in growth than value.  The weights of growth over value in these sectors are bigger for small caps than large or mid caps.

Also, in July, small caps outperformed large caps in materials by 1.4% and energy by 0.2%.  This helped contribute to the month’s small cap growth outperformance since although the growth weight was less than the value weight, it was by less than in the bigger stocks.

Overall, the total return for the S&P 500, S&P 400 and S&P 600 was 3.7%, 1.8% and 3.2%,  respectively, in July.  All sectors in large and small caps gained with industrials, health care and financials leading, likely from growth.  Historically financials and health care are the two sectors that benefit most from GDP growth, with small caps rising on average 6.9% and 6.4% with every 1% of growth.  Large caps in these sectors also benefit, each rising on average 4.5% for each 1% of GDP growth.  Also industrials benefit highly from rising interest rates with small caps and large caps gaining 8.6% and 8.2%, respectively, on average for every 100 basis point rise in rates.  Although rates didn’t increase, the market may be looking ahead to Sept. when there is a chance for an increase.  Lastly, industrials were also helped by the renewed trade negotiations between China and the U.S. 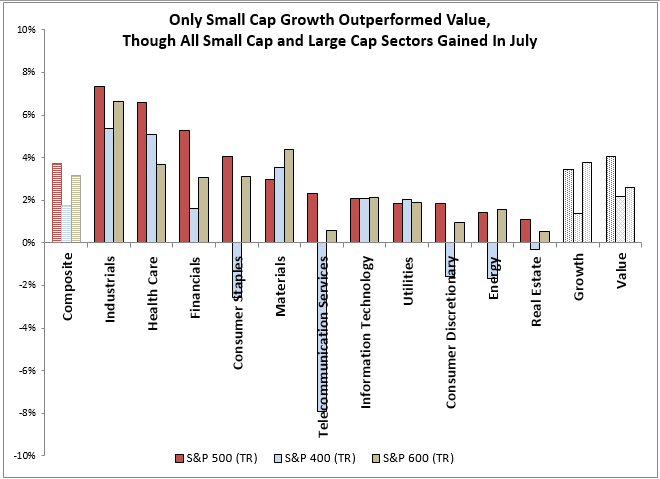