A calendar that offers a forecast for every day of the coming year is not uncommon in Chinese households.  I don’t often hear references to the calendar on most days. But every now and again I would hear my mom marvel, “Oh that calendar was right on for today!” In investing, there is also particular penchant for prediction at the beginning of the year. The start of a new year means we have put the previous one behind us, and knowledge of what the coming year will bring will be helpful.

But rarely do people look back to see whether those forecasts actually panned out…except, of course, on the rare occasions when some did materialize. As an example, “Why 2017 could be the year stock pickers regain their edge,” was published in early 2017. Among the many predictions used to justify a “stock pickers’ market” were: inflation should rise, interest rates should rise, value stocks will do well, correlations will be low and dispersion will be high.

Many of these just did not happen in 2017; inflation remains tame, the 10-Year Treasury rate barely budged year over year, value did not make a comeback and dispersion was lower on average in 2017 compared to 2016.

One prediction, however, did happen. Correlations were lower on average in 2017 compared to 2016, and this is a commonly used justification for a better stock pickers’ market.  Unfortunately,  it is dispersion that defines the opportunities available for outperformance—and SPIVA data show that the lowest dispersion environments correspond with the worst manager performance).

In contrast, active managers are no more likely to outperform when correlation is low than when it is high.

Correlation Had No Significant Influence on the Outcome of Manager Performance

Undoubtedly, more predictions will be forthcoming for 2018 and likely, many will be the same ones that were made for 2017. But at least if we come across the one about low correlations we can check it off the list because it is irrelevant to the outcome of active performance. 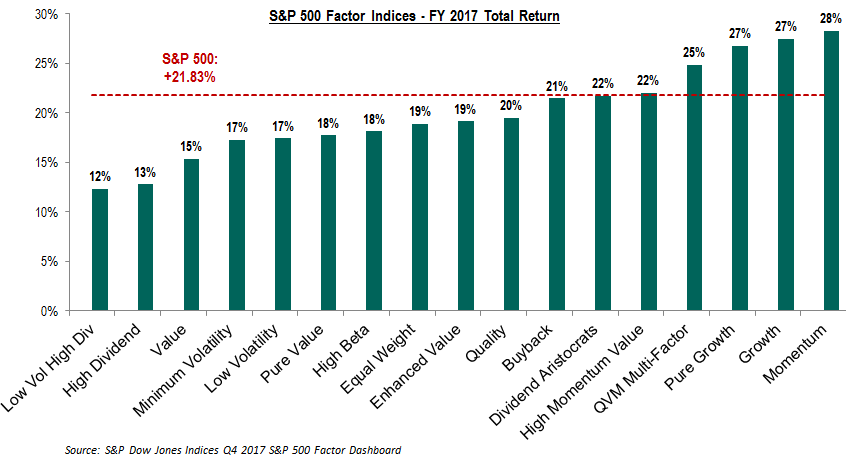 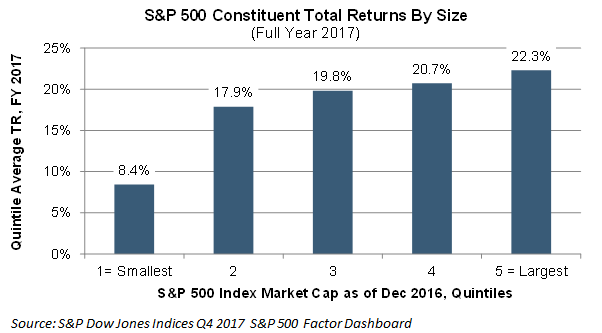 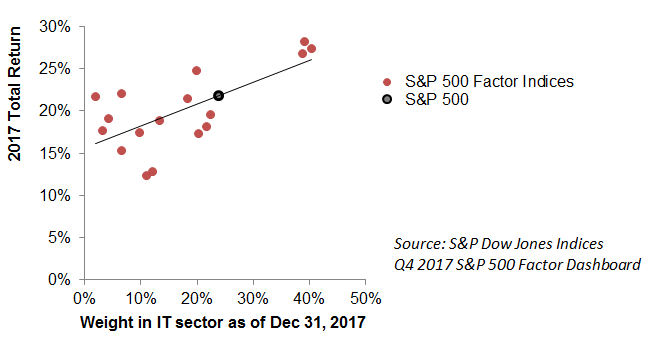 Yesterday, the first markets day of the New Year, the Dow Jones Industrial Average® continued its advance, finishing up 104.79 points for a 0.42% gain. How does that stack up against the post-holiday return to trading in prior years? Meh…it was nothing special.

Not to look a gift horse in the mouth, mind you. A gain is a gain is a gain. But it’s far from the best first day ever. In fact, it only ranks as 51st of 121 observations since the DJIA’s inception. The best—Jan. 4, 1988—came as world banks reported buying dollars to curb the U.S. currency’s decline. 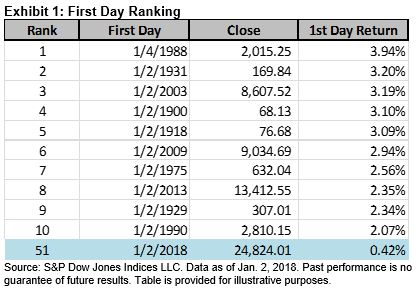 But wait. How does the first day presage annual performance? Is it at all predictive of the year, does it set the tone for the next 12 months? Well, when the Dow rises on Day 1, the whole year experiences a positive return 68% of the time. Sounds good, right? Not really. Similarly, when the Dow falls on Day 1, the whole year is up 65% of the time.

Fact is, the DJIA has a positive annual return 66% of the time. Period. In other words, the DJIA closes the year with a gain two-thirds of the time, regardless of what happens on Day 1. So, no. No predictive power whatsoever. But, of course, you already knew that. There is simply too much time, too many things that influence stocks over the course of a year. The first day no more sets the tone than does Bangladeshi butter production.

Turns out this post is a tale, told by this idiot, full of sound and fury and signifying nothing. Go back to your business.