Why Does Sequence of Returns Risk Matter for Retirement?

The Trump Rally – Or Is That Global Sector Diversification?

The S&P GSCI was up 1.4% with a YTD return of 1.3% in November. Of the five sectors in the index, energy and agriculture were positive for the month, up 3.4% and 0.5%, precious metals was flat, while industrial metals and livestock finished the month on a negative note, down 3.2% and 5.5%, respectively.

The 24 commodities tracked by the index were divided between positive and negative territory in November. Cotton was the best-performing commodity for the month, while nickel was the worst.

Crude prices benefited from OPEC and non-OPEC members agreeing to extend output cuts into 2018, and WTI specifically benefited from a decrease in inventories by 3.4 million barrels, as reported by the U.S. Energy Information Administration.

In fact, this low level of inventories can be seen in the roll yield of the S&P GSCI Petroleum. Since August, the roll returns, as measured by the excess return of the index minus the spot return, has moved into backwardation (positive roll yield) for petroleum (see Exhibit 2). In November, the roll yield reflected a small level of contango, or negative roll yield, which is the result of nearer contracts being cheaper than later-dated ones, however this contango level of 0.05% still shows a significant improvement from levels seen earlier in the year. The S&P GSCI has been in contango at the end of each month since November 2014.

Understanding the carbon exposure of smart beta strategies is important for market participants who are already implementing factor strategies and wish to incorporate carbon risk into the investment process. In a previous blog, our analysis showed that factors such as low volatility and value may be predisposed to higher carbon emissions because of their sector compositions.

Emissions are typically measured by mass of carbon dioxide equivalent (CO2e), whereby the “equivalent” is a proxy applied to greenhouse gases other than carbon dioxide and reflects their relative environmental impact. The units of reference are in kilotons of CO2e.[1] Exhibit 2 shows the total direct emissions for the S&P 500 Low Volatility Index on a semiannual basis from December 2009 through June 2017, and it should be noted that there have been fluctuations in the level of carbon emissions.

The S&P 500 Low Volatility Index is designed to measure the performance of 100 least volatile securities, with volatility represented by the standard deviation of price changes over the trailing 252 trading days. The index has shown to have dynamic sector composition depending upon market environments.[2] For instance, the utilities sector’s weighting in the S&P 500 Low Volatility Index has averaged 23% from December 2009 through June 2017 with a high of 32% and a low of 3% (see Exhibit 3). Given sectoral shifts, the potential exists for large swings in absolute carbon emissions data (see Exhibit 2). Yet, the contribution to carbon emissions from the utilities sector appears to remain consistently high, averaging 77% since 2009 (see Exhibit 3).

For low volatility indices, blindly removing carbon intensive utilities securities could be counterproductive to the primary investment objective of the strategy. As such, more complex portfolio construction techniques such as having an additional quantitative process or an optimization may be necessary to ensure that carbon exposure is effectively minimized while maintaining the desired level of exposure to the factor and the risk reduction abilities.

[1]   Emissions data is sourced from Trucost, which provides data on both direct and first tier indirect emissions on a company-by-company basis; if companies do not report or otherwise make such figures available, Trucost estimates the emissions of each company using a proprietary model. Direct emissions, as the name suggests, encompasses emissions of CO2e produced directly by the entity, whereas indirect emissions are those that arise from the entity’s suppliers of materials and equipment, utilities such as electricity, and business travel. The inclusion of indirect emissions is not always preferable, especially in an index, as this may result in double counting. For example, if a utility company as well as one of its customers is included in the same index, the emissions of the latter would be counted twice.

The belief that economic growth is possible without lowering carbon emissions is becoming harder to sell by the minute. A study by the London School of Economics showed that if business-as-usual emissions continue over this century, the value of risk to global financial assets in today’s terms is 1.8%, or USD 2.5 trillion. Likewise, analysis by Trucost shows that operating margins will turn negative for 46% of companies in the chemicals sector by 2030 because emitting carbon will become too expensive (see Exhibit 1).

In August 2017, Trucost launched its Corporate Carbon Pricing Tool to provide a data-led way for companies to translate carbon risk into financial terms. Here’s how carbon pricing can be applied to prove the business case for low-carbon innovation.

When using the risk-adjusted carbon price, a USD 1 million investment project has a payback period of less than two years and is already providing positive cash flow by the second year, while a conventional payback period would take almost 13 years.

Pricing carbon risk provides a strategic link between environmental and financial performance, strengthening the business case for proactively mitigating climate-related risks. Companies and investors that take this step will benefit from a forward lens on carbon risk and the opportunity to inform tomorrow’s low-carbon innovation.

Why Does Sequence of Returns Risk Matter for Retirement?

Sequence of returns (SoR) risk refers to the situation when the market experiences random movements in such a way that returns are not uniformly distributed. For example, in the 32-year period from 1966 to 1997, the DJIA had an annualized return of 8%. However, the returns were not evenly distributed over time. For the first half of this period, from 1966 to 1981, the Dow began at 1,000 and ended at about the same level. Then, from 1982 through 1997, the Dow grew over 15% per year, taking the index from 1,000 to about 8,000.

In a recent book “Adaptive Asset Allocation: Dynamic Global Portfolios to Profit in Good Times—and Bad,” by Adam Butler, Michael Philbrick, and Rodrigo Gordillo,[1] the authors looked at the DJIA history from 1966 to 1997 and performed an interesting thought experiment.

They divided the period into two halves: 1966-1981 and 1982-1997. For a retiree who retired in 1966, according to the historical order of the returns, they stipulated an initial portfolio balance of USD 3 million and monthly spending of USD 16,200, on an inflation-adjusted basis. Based on this withdrawal strategy, in 12 short years, by 1978, the money was gone. They then reversed the order of the sequence of returns as follows: the strongly surging market from 1982 to 1997 first, followed by the volatile sideways market from 1966 to 1981. In this scenario, the retiree was able to withdraw the desired income each year, adjusted for inflation, and still end up with over roughly USD 6 million in terminal wealth at the end of 1997.

For retirees who began their retirement shortly before years of major market corrections, such as the market crash in 1987 and the Great Recession of 2008, their retirement funds may be gravely affected, due to the exposure to downside risk. To help mitigate SoR risk, particularly given that no one can foretell the timing of adverse market events, it would be prudent to allocate a few years’ worth of spending needs in non-volatile accounts, specifically earmarked for the first few years in one’s retirement, in order to avoid SoR risk.

The Trump Rally – Or Is That Global Sector Diversification?

This is the final post in our blog series that examines the domestic large-cap equity market performance, as represented by the S&P 500®, since the 2016 U.S. election.[1] We use the geographic revenue exposure of S&P 500 constituents to better understand whether or not Trump’s proposed U.S.-centric economic policies have had an impact on the equity market. In our last two posts, we looked at the performance of the Domestic Revenue and the Foreign Revenue Portfolios, as well as their macroeconomic risk exposures. This post investigates the sector-level performances of the Domestic and Foreign Revenue Portfolios.

The 11 sectors in the S&P 500 widely vary in their overall percent of total revenue obtained from the U.S. Sectors with relatively high revenue exposure to the U.S. (compared to the overall S&P 500 average) include financials, real estate, telecommunication services, and utilities, while information technology and materials tend to be more exposed to the global economy. Exhibit 1 shows the average percentage of revenue coming from the U.S. at the sector level and for the overall S&P 500 on Election Day. 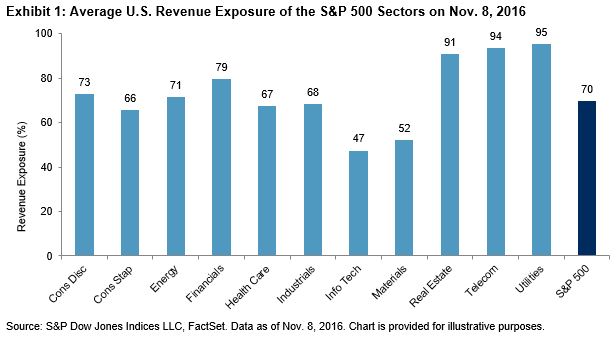 Given that the constituents of the aforementioned revenue portfolios are selected based on their percent of revenue exposure, one could infer that the sector tilts of each portfolio reflect the S&P 500 revenue exposure composition. Observing the sector weights of the Domestic Revenue and Foreign Revenue Portfolios compared to the S&P 500 on Election Day confirms this (see Exhibit 2). For example, Exhibit 1 shows that the average company in the information technology sector received 47% of its revenue from the U.S., which is substantially lower than the overall S&P 500 company average (70%). Unsurprisingly, there was a significant overweight to the information technology sector in the Foreign Revenue Portfolio (active weight of 15.12%), while the Domestic Revenue Portfolio showed minimal exposure (active weight of -19.76%). 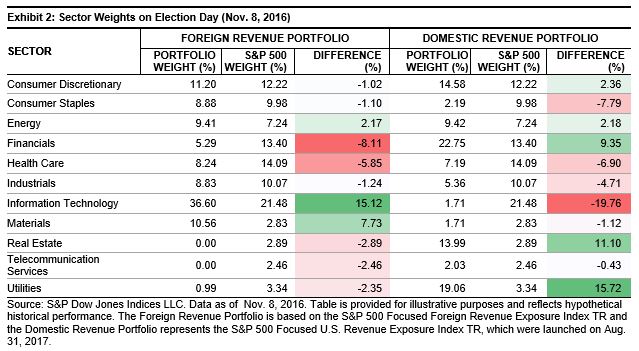 So, are the performance differentials between the two portfolios that we presented in the first post a result of tilting the S&P 500 sectors? To determine if this is the case, a sector attribution analysis was run for the time period (Nov. 8, 2016–Oct. 31, 2017). Attribution analysis breaks out the performance differences between each portfolio and the S&P 500 into an allocation effect and a selection effect. The allocation effect shows the impact of the active sector bets in the portfolios, while the selection effect demonstrates the impact of security selection within each sector. 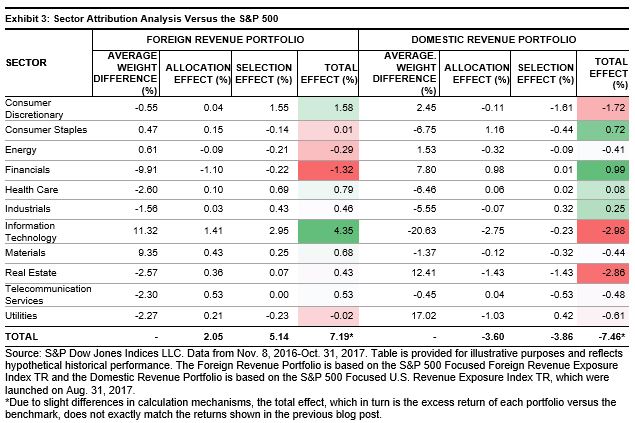 Several conclusions can be made from Exhibit 3. First, the Foreign Revenue Portfolio benefited from sector bets and stock selection; however the majority of the excess return versus the S&P 500 came from the selection effect. This illustrates that leveraging geographic revenue data to tilt sector weights and select individual securities contributed to the positive alpha of the portfolio. Secondly, the resulting underperformance of the Domestic Revenue Portfolio came from the attribution and selection effects in near equal proportion.

The analysis provided in this blog series demonstrates that allocating toward the sectors or industries that were expected to benefit from “Trumponomics” would not have been rewarding in relative performance terms. In fact, the opposite has been true. Perhaps due to the absence of implementation of any of the proposed policies, confidence in any of them becoming reality has deteriorated in the marketplace.[2] Instead of claiming the last 12 months to be the Trump Rally (self-proclaimed,[3][4] or otherwise), maybe it can be called the “Multinational Corporations Rally.”

[2]   In the October 2017 World Economic Outlook report, The International Monetary Fund revised GDP Growth projections for the U.S. in 2017 and 2018 downward from their April 2017 report, specifically due to significant uncertainty of the proposed economic policies, such as tax cuts, actually taking effect: https://www.imf.org/en/Publications/WEO/Issues/2017/09/19/world-economic-outlook-october-2017