The means by which we communicate has grown over the past several years as a result of integration between telecommunications, media, and internet companies.  In response, S&P Dow Jones Indices and MSCI recently announced the expansion of the Telecommunications Services Sector into a new Communication Services Sector to be implemented after the close on Friday, September 28, 2018.  While the companies involved are not announced yet, there are some important things to know about how the changes may impact the indices.

As mentioned in the announcement, in order to include companies that facilitate communication and offer related content and information through various media, selected companies from the Consumer Discretionary Sector currently classified under the Media Industry Group and Internet & Direct Marketing Retail Sub-Industry along with certain companies currently classified in the Information Technology Sector, will be added to the existing Telecommunication Services Sector.

To start, here is what the Telecommunication Services Sector looks like currently: 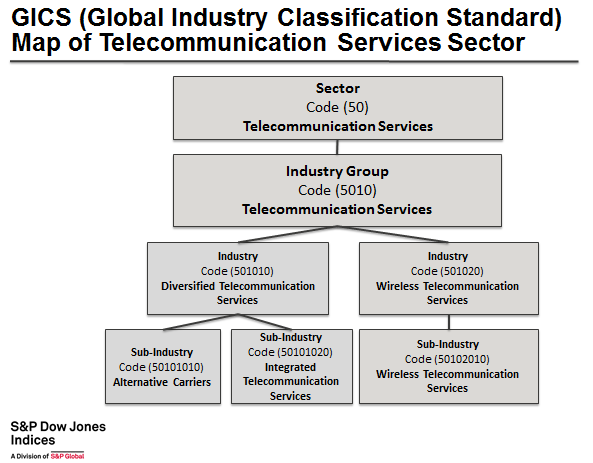 While it may look comprehensive, there are only 3 stocks from the S&P 500 in the Telecommunication Services Sector with a combined market capitalization of $413.0 billion and average market cap of $137.7 billion for a weight of just 1.9% in the broad index.  In the greater set of market cap weighted U.S. equity indices, the sector is still relatively small.

The new Communication Services Sector will include the existing telecommunication services companies (as an Industry Group,) but also aims to reflect the integration of telecom, media and select internet companies, leading to an additional Industry Group called Media & Entertainment.  The companies that facilitate communication and offer related content and information through various mediums will be considered in the new sector, depicted below.

Although no announcements have been made on the exact companies moving into the new sector yet, based on the information in the announcements, a hypothetical approximate of the new communication services sector can be examined.  In the following illustrations of hypothetical backtests, the approximation of a possible communication services sector index is based on 10 years of historical monthly data of the current Telecommunication Services Sector, Media Industry Group, Internet Software & Services Sub-Industry and the Home Entertainment Software Sub-Industry with fixed weights shown in the table above.  The S&P MidCap 400 Home Entertainment Software Sub-Industry is excluded from the analysis from insufficient history.

In every time period measured annualized over 1, 3, 5 and 10 years, the new Communication Services Sector outperformed the Telecommunication Services Sector.   Not only did it outperform but the risk was also reduced over every time period, with the exception of the 10 year annualized risk for the large cap sector.  The added volatility comes from the relatively large weight and volatility from the S&P 500 Internet Software & Services Sub-Industry that overpowers the moderately low correlation.

Overall, it seems the higher returns with lower volatility is an attractive result of the expansion of the current Telecommunication Services Sector into the new Communication Services Sector.  While the new sector will be more diversified with lower volatility, there is still room for diversification across the market capitalizations, but especially between large and small caps.

This was written by product management and based only on publicly announced data and not a product of GICS, IMPG or Index Governance.

There’s still some time remaining in 2017, but if it goes the way the year has thus far, this will be the least volatile year for the S&P 500 in 22 years. Given this context, selection to the S&P 500® Low Volatility Index (an index of the 100 least volatile stocks in the S&P 500) recently has mostly been about which stocks have declined in volatility the most. In each of the last four rebalances, average realized volatility for the stocks in Low Vol has declined compared to the previous rebalance.

In the latest rebalance, Utilities regained its usual prominence, adding 5%; at 22% of Low Vol, it is currently the biggest sector in the index. This came mostly at the expense of Consumer Staples, whose weight declined to 9% from 13%. Real Estate’s weight doubled to 6%.  Curiously, although underweighted compared to the S&P 500, Technology maintains a significant weight in Low Vol (the sector’s standing ballooned in the rebalance in May 2017.)

As a rule of thumb, sector level volatility usually provides good insight into the S&P 500 Low Volatility Index, even though the index’s methodology is entirely focused at the stock level. For the latest rebalance, however, sectoral volatility was only part of the picture. For the year ended October 31, 2017, all sectors declined in volatility with the exception of Technology and Telecom. Unsurprisingly, Telecom has left Low Vol altogether. 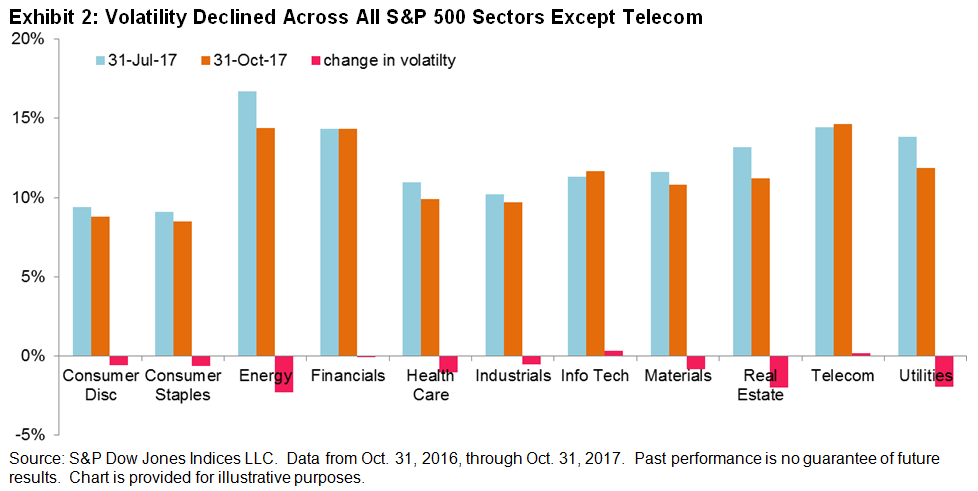 On Nov. 8, 2016, Mr. Narendra Modi came on national television and announced that at the stroke of midnight, 500 and 1,000 rupee notes would no longer be legal tender.  These notes constituted 86% of the total currency in circulation.  This announcement was by far one of the boldest economic decisions taken in recent years.  The rationale for this unexpected decision was to remove counterfeit currency notes from the system, end the parallel black market economy, and digitize the Indian economy.

One year later, the topic of demonetization is still being discussed and debated across the length and breadth of India.  While many support this bold move, there are others who criticize it.  Wherever this debate goes, it’s easy to see that capital markets in India have been on a roll over the past year and have given exponential returns across size, segments, and sectors.

In this blog, we will analyze how capital markets in India have performed since the demonetization announcement was made in November 2016.

Exhibit 1 and Exhibit 2 showcase the one–year, post-demonetization returns for the four leading size indices in India. 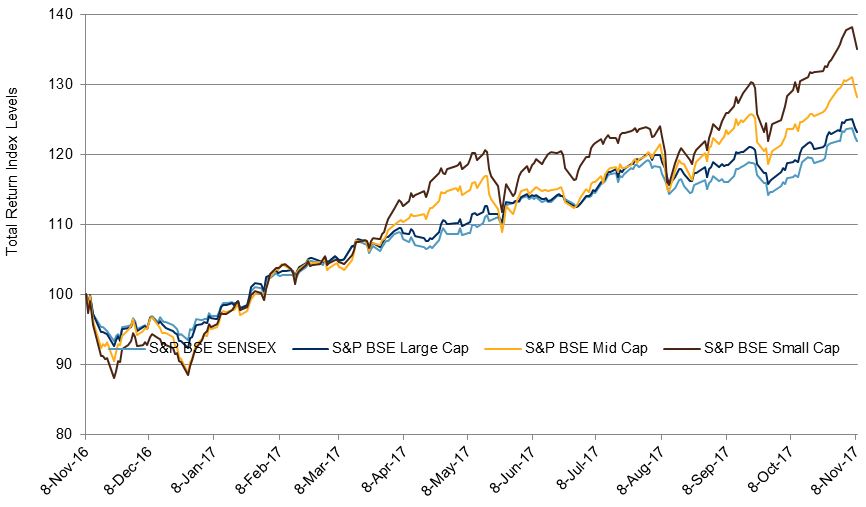 Exhibits 3 and 4 showcase the one-year, post-demonetization returns for the 11 leading sector indices in India. 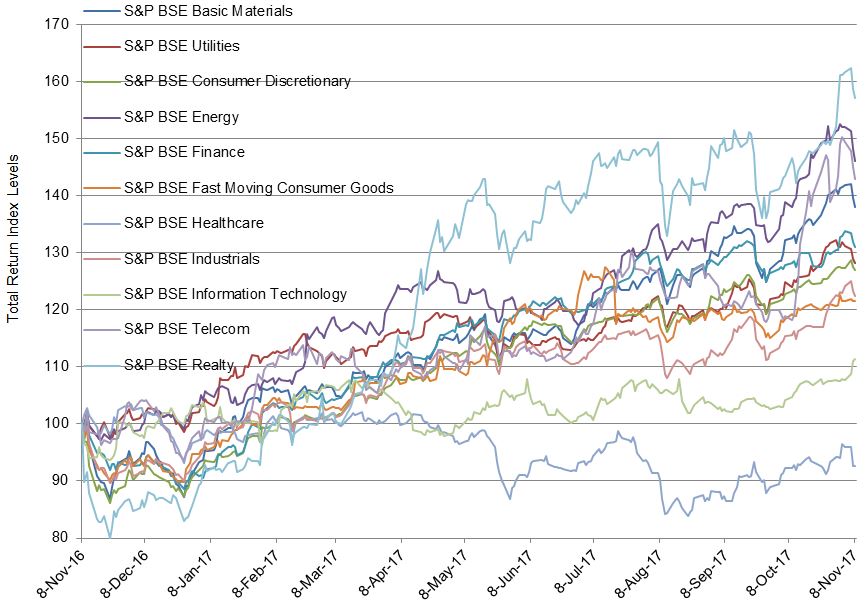 To summarize, we can say that the bulls have had their way during the 12-year period since the announcement of demonetization was made, and indices across various size segments and sectors have given exponential returns. 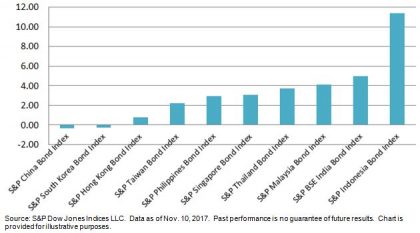