It is well known that diversification lowers the risk. For example, say we want to travel from one place to another. We can take a bus. What if the route on which the bus plies is blocked for some reason? We can consider taking another bus which travels on a different route. What if all the bus operators are on strike? We can consider taking a taxi. What if all the taxi operators are also on strike? We can consider travelling by train. By keeping the options open or diversifying the modes of travel we are trying to reduce the risk of not being able to reach the destination. Investors can also use the power of diversification to lower their investment risks. Exchange traded funds (ETFs) are a means by which investors can diversify their investments across a range of asset classes or to pursue investment strategies.  In India in recent years the number of ETFs offered and assets under management have increased, except for gold ETFs.

In the capital markets, investors can pick and choose a security or invest in a basket of securities that is diversified, meaning the securities are expected to move up and down under different market conditions. Of course, the inherent risk of investment loss would be lower for the basket than for a single security. However, monitoring a basket involves much more effort in comparison to a single security. Hence the mutual fund industry was born where investors were able to pool their money and let the professionals manage it for a fee, and reap the benefit of diversification. At the same time, investors were also liberated from the chore of monitoring the basket.

The mutual fund industry can again be divided into active funds versus index funds, which is a passive investment style. In the active space the manager makes active investment decisions on stocks in an effort to generate alpha. However in an index fund, the manager simply attempts to replicate an index with minimum tracking error. The benefit of index fund is lower expense ratio due to lower management fees. As the markets evolved, investors realized that mutual funds, whether active or index, are not tax efficient since the capital gains realized on the sale of fund investments, including to meet redemption requests, is distributed across all the existing investors based on fund ownership.

Exchange traded funds (ETFs) were invented to be more tax efficient in addition to having lower expense ratios than mutual funds. As the name suggests, ETFs are traded on the stock exchanges throughout the day, unlike the mutual funds which are purchased or redeemed only on an end of day basis. With the introduction of ETFs, the smaller investors were able to gain access to some of the asset classes that were previously accessible to only the institutional investors. ETFs also have helped in the price discovery of some of the less liquid asset classes. The most noteworthy feature of an ETF is transparency as the underlying securities and their quantities held are declared on a daily basis.

ETFs were first listed in developed nations in early 1990s and have grown tremendously in terms of the number of ETFs listed as well as the assets under management. In India the first ETF was listed in the year 2002. Since then the number has gone up to 49 as of June 30, 2015 (see Exhibit 1). 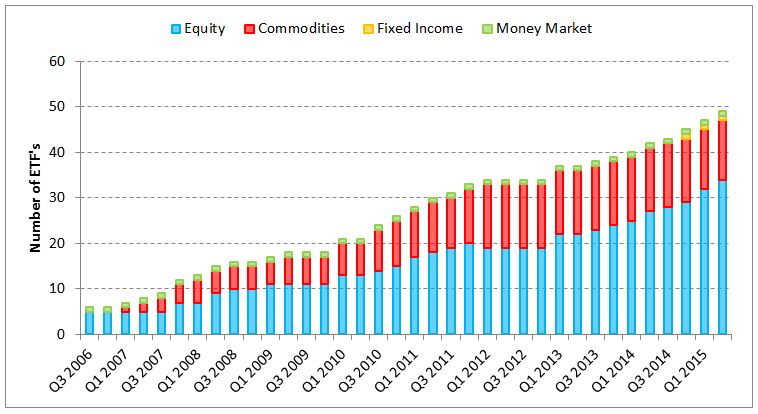 It is interesting to note that in India the presence of ETFs is not in one but four different asset classes and the two major categories are equities and commodities. The equity ETFs are primarily large cap with some focusing on mid cap and financial sectors. The entire commodity ETFs are based on gold.

From Q2 2006 through Q4 2007, the quarterly asset under management in the equity ETFs soared and reached INR 73.83bn in Q4 2007 (see Exhibit 2). Since then it declined during the recession and reached the lowest at INR 4.01bn in Q2 2009. The asset under the management again started picking up since Q2 2014. This can be attributed to the improved market conditions as well as the introduction of the CPSE ETF which comprises almost 36% of the assets within the equity ETFs as on June 30, 2015.

Gold has been one of the popular investment options amongst the Indians as a store of value. From Q2 2009 onwards, gold ETFs have had the highest share of the quarterly average assets reaching INR 118.52bn in Q1 2013 (see Exhibit 2). Since Q2 2013, the asset under management in gold ETFs have declined by more than half due to various reasons such as strengthening of dollar, lesser demand for gold in domestic market due to import restrictions, amongst others.

Exhibit 2: Quarterly average asset under management of ETFs in India. Date as of June 30, 2015 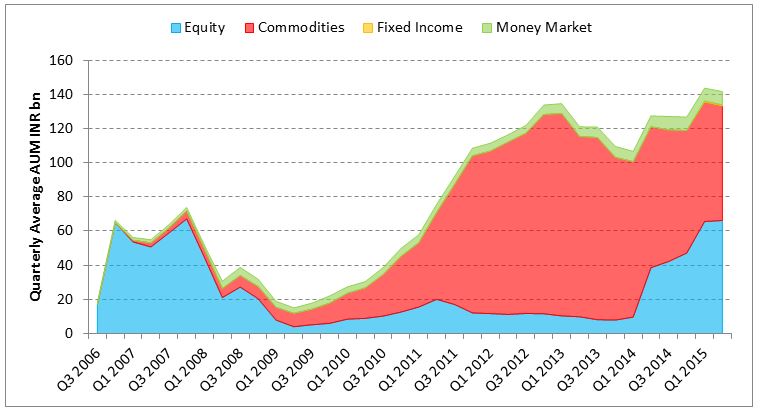 The liquidity profiles of the ETFs also reveal some interesting facets of this industry. Historically the gold ETFs combined have remained most liquid followed by money market ETF. But in more recent times, money market ETF has been the most liquid ETF and equity ETFs combined have been the second most liquid ETFs (see Exhibit 3). During 2011 through 2012, gold ETFs were aggressively pursued by the investors. In Q3 2011, the combined quarterly average daily value traded of the gold ETFs was more than INR 800mn. Since Q2 2013, the liquidity has reduced which is also augmented by the fact that the asset under the management have declined since then. 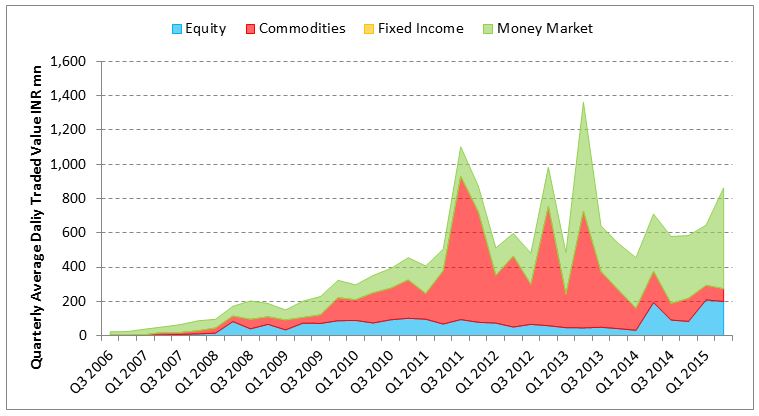 The ETF industry in India has been very dynamic over the years and it is still growing. Unlike some of the developed nations where active ETFs also exist, India only has passive ETFs. Indices play a major role in the functioning of the passive ETFs which simply try to mirror the benchmark index they are based on. With more and more investors becoming aware of the potential advantages of this investment product, it will continue to grow and help investors in their quest for diversification with lesser cost and tax efficiency.

Tagged:
ETFs, India, S&P BSE SENSEX
The posts on this blog are opinions, not advice. Please read our disclaimers.