Many people are asking if we are seeing withdrawals from commodities since oil has dropped about 25% since its high in June.  While we don’t track asset flows of products based off the indices, the anecdotal answer is many view this as a buying opportunity.  The IEA predicts an acceleration of oil demand growth from non-OECD countries of 2.6% in 2015 up from 1.9% in 2014 that can be mainly attributed to Asia, Africa, and the Middle East. While lower oil prices could change this, it is more likely to cause a great divide between where the demand comes from, with proportionally more from Asia.

The next question being asked is whether the potential buying opportunity is better executed with active or passive strategies.  That depends on how much confidence you have that you can pick the winner.  Did you guess that Algeria would only secure 4 out of 31 available licenses to international companies to explore and produce? or that a local strike in Libya would take 25 kb/d off the market in an instant? or that Beijing would buy 8 million barrels of Middle East crude as Brent fell under $90/bbl? Only the foresight around situations like these- or luck- would result in proftable in alpha strategies.

In this mean reverting environment with inventories hovering closer to equilibrium than they have post the financial crisis, picking the winner is difficult.  I didn’t hear too many predictions that coffee, aluminum, cattle and nickel would be among the winners this year.

That said, last week, did you guess natural gas would be up 13.7% this week?  The headline in the WSJ is around cattle from the drought that has been driving cattle prices up about 30% this year- but it’s nothing to moo about in November. However, the return of the Polar Vortex is something to chatter about. Maybe equities are more dependent on sunshine, but not natural gas.

So, if you want to play the guessing game, you better pick right and ON TIME, or else you are missing out.  Many prefer to stay invested broadly to avoid the picking and timing trap- as this cold was hard to catch.

Global investors continue to explore investment opportunities in China onshore bond market. Chinese bonds undeniably offer higher yields than other major bond markets. As of Nov 5, 2014, the yield-to-worst of the S&P China Bond Index stood at 4.09% with a modified duration of 4.15, see Exhibit 1.

More importantly, investing into Chinese bonds adds diversification benefits to a portfolio through the exposure to local rate, credit and currency. According to the S&P China Bond Index, the Chinese bonds have historically exhibited low to negative correlations to U.S. bonds.

The Chinese bond market has outperformed the U.S. treasury and corporate bond markets year-to-date as well. As of Nov 5, 2014, the S&P China Bond Index delivered a YTD total return of 10.08%.

Preferred stocks are a class of capital stock that pays dividends at a specified rate and has a preference over common stock in the payment of dividends and the liquidation of assets.

The S&P U.S. Preferred Stock Index is designed to serve the investment community’s need for an investable benchmark representing the U.S. preferred stock market. The Index has currently returned a total return of 0.14% month-to-date and 13.07% year-to-date.

A 13% return in the current low rate environment is fantastic but if you delve a little deeper you can do even better.  S&P Dow Jones Indices has developed sub-indices that break-out the preferred parent index into coupon type and rating sub-indices.

Of the coupon types, the S&P U.S. Floating Rate Preferred Stock Index is outperforming the parent index with a 15.18% year-to-date.  The reason floaters have not pushed the parents return up higher is that floaters only constitute 4% of the overall index.

Rating sub-indices are equally impressive as the S&P U.S. High Yield Preferred Stock Index has returned 0.23% for the month, while the S&P U.S. Investment Grade Preferred Stock Index year-to-date has returned 15.5%.  Depending on your risk tolerance, both rating segments have provided consistent returns though the high yield sub-index has performed better over 3 and 5 year time horizons.

October was a difficult month for European equities. The S&P Europe 350 fell by over 3%, taking a day-to-day lead from Greek government bond prices, and with every sector and nearly every country posting a loss for the month.  A 3% loss is not unusual, nor remarkable. But the warning lights are flashing… 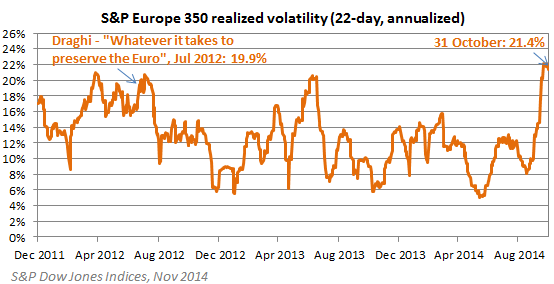 This may be a flash in the pan – an over-reaction, perhaps, to an underwhelming package of measures unveiled by the ECB in early October, or to economic figures in Germany and France that, while disappointing, were hardly extraordinary. And Japan’s central bank has is coming to the rescue.

However, high correlations and high volatility tend to persist in the short term. And elevated levels of both lead to a highly unstable marketplace.

Don’t be surprised if there are some bigger bumps down the road.

I don’t believe what the gas experts say, “that there is nowhere for gas prices to go but down.”

After another bloodshed month for crude oil as evidenced by the S&P GSCI Crude Oil return of -10.9% in Oct, bringing it down 24.6% off its high on June 20, one might get excited about further savings at the pump. Save that excitement.

The gas retailers are not looking to save any money for anyone but themselves. At least this is the story using data going back to 1991 from the EIA (U.S. Energy Information Administration) for U.S. Regular Conventional Retail Gasoline Prices (Dollars per Gallon) and S&P GSCI Crude Oil levels.

According to the EIA, what we pay at the pump is split into a chart with the following breakdown:

This might be true but only on average.  In the total sample of 251 months, gas prices rose during 196 months where oil prices fell.  In only 55 months was the reverse true. Further when oil fell and rose, it was pretty symmetrical, falling on average 6.6% and rising 6.9%; however, when gas prices fell, they only shaved off 3.8% on average compared with an increase of 4.9% when they rose.  The picture becomes even clearer and more biased when observing the gas price change with the oil price change. When oil prices fell, on average gas prices only fell 2.1% but when oil prices rose, gas prices rose 2.7% – in other words, when oil rose and fell, it moved roughly at a 1:1 ratio; but the amount gas rose was 30% more than the fall. If we put this in terms of a beta, or sensitivity, similar to how we calculate a stock beta or inflation beta, the gas beta (to oil) is only 0.41, showing that it doesn’t fully swing up AND DOWN with the underlying oil.

According the IEA (International Energy Agency), it turns out that macroeconomic factors may have a greater impact on (oil) demand than oil prices. Their demand model therefore gives macroeconomic factors a higher weighting than crude oil price assumptions, which do not directly feed‐through to retail product prices, as taxes and subsidies blunt the impact of crude price changes, and are deemed to play a less significant role than economic growth in terms of influencing demand. These two exogenous variables are however, interrelated: lower prices, for most countries, reduce the cost of doing business and support economic growth, the converse being true for net oil exporters. At this point, the only conclusion is that lower prices offer a cushion of sorts against an otherwise vulnerable macroeconomic backdrop.

Gas retailers aren’t the only retailers trying to profit from the everyday consumer like you and me. This is true for food as well. Although grains had a nice rebound in October, with the DJCI Grains gaining 14.5% this month, the DJCI Softs didn’t fare so well and lost 1.6% driven down by all the treats we love like coffee (-2.8%), sugar (-2.5%) and cocoa (-12.2%).  So let’s get excited about cheaper Christmas treats than Halloween treats, right?! WRONG!!!

According to the USDA (U.S. Department of Agriculture,) the farm to table expenses flow much like the pipe to the pump. 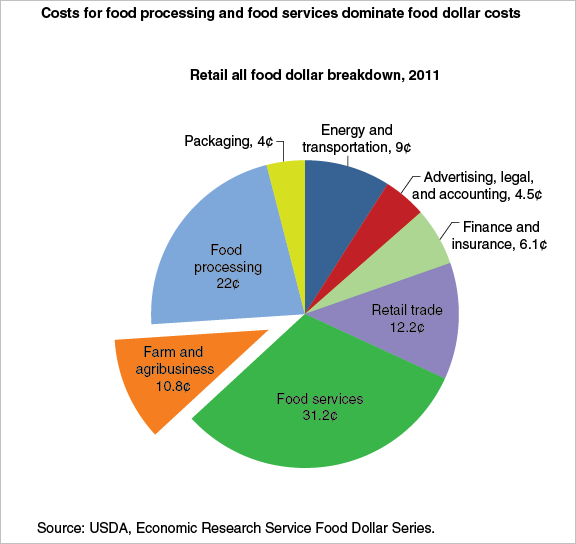 The USDA also reports, one reason for the relative stability in retail prices in relation to commodity prices is that these prices reflect the cost of processing and marketing inputs in addition to commodity costs. ERS’s 2011 Food Dollar Series reports just 10.8 cents of every food dollar goes toward farm commodities and agribusiness expenses. The remainder is allotted to food processing, food service, and other administrative, transportation, and retailing costs, categories which are less volatile due to fixed machinery expenses, multi-year contracts for supplies, and small year-to-year changes in wages. Since 1990, grocery store wages—which make up over 50% of retailing costs—have increased an average of 2.2% per year.

Moreover, the USDA says retailers and restaurateurs are sometimes slow to pass input costs along to consumers through higher prices, which can cause margins to narrow during times of higher commodity price inflation. Delayed price transmission in grocery stores can occur for a variety of reasons, including re-pricing costs (such as printing new shelf price labels) and concerns that input price changes are only temporary. A 2011 ERS study found that retail prices for bread and beef generally respond to changing commodity prices within 1 to 6 months. However, lags for some foods such as eggs and milk are at the upper end—5 to 6 months.

Notice in the chart below how the All Food CPI (green line) actually rises as the Farm Products PPI (blue line) is falling from Sept to Oct. 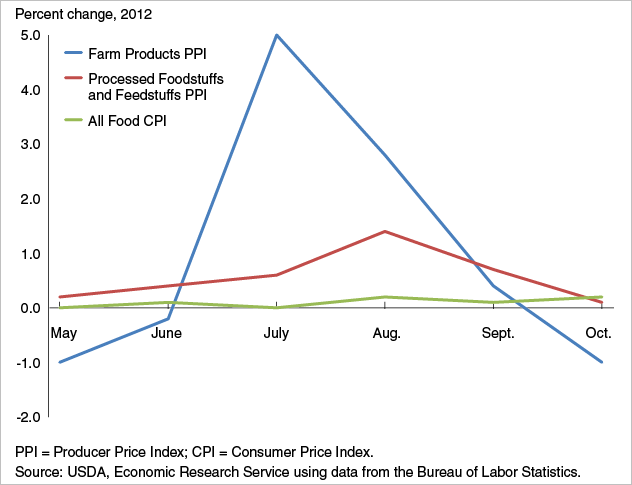 Too bad, you might go broke eating the chocolate to fix your depression from the artificially elevated gas price.