Bonds May Puzzle But Stocks Could be Worrisome

Bonds: Just when people thought we were safe from creative financing applied to bonds backed by homes, a new improved approach is about to surface.  The past year has seen an increase in buying homes for rent by private equity funds and others.  The private equity buyers are funded by their fund investors, much the same way private equity investments in corporate businesses are funded.  As noted in the New York Times yesterday, American Homes 4 Rent, a publicly traded real estate investment trust is planning a bond issue to raise funds to purchase homes for rent. The company went public last summer and has a market value of about $3 billion.   If this bond issue proves successful, and is followed by further issues from other companies looking to enter the home purchase-to-rent business, this could accelerate a shift towards renting from buying.

The growth in buy-to-rent may raise some risks to the economy.  If a large buy-to-rent firm fell on hard times or if housing prices in an area with significant rental activity were to drop, the owner of rental homes might be tempted to dump the houses on the market putting huge downward pressure on prices, and the local economy.  Such a move might mean falling prices and the specter of default for rent-to-buy bonds.  At present the extent of rent-to-buy is modest and the risk of a major economic reversal from a collapse in the rental housing market is limited. Separately the Census Bureau reported today that the home ownership rate for the fourth quarter of 2013 was 65.2%, a bit below the figure of 65.4% at the end of 2012. 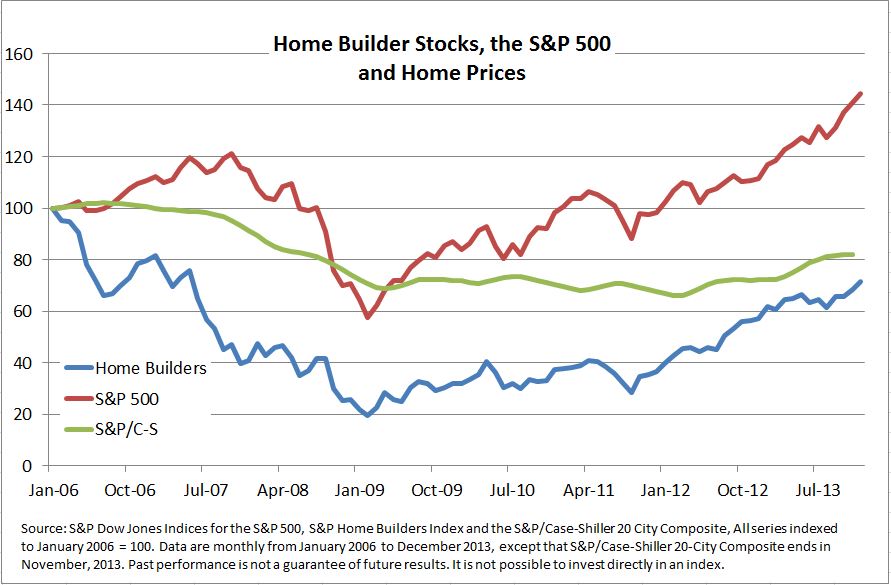 Stocks: While housing starts and new home sales lagged in this long drawn out recovery, home building stocks did well.  Home builders, as shown by the S&P Home Builders Index, dropped farther and faster than either home prices or the S&P 500. (see chart). The exciting part started at the bottom in February 2009 – well before home prices turned up in the second quarter of 2012.  From the bottom, the home builders are up about 2.6 times, much better than the 1.5 times gain in the S&P 500. Home prices are above their level of February 2009, but not by much.

The US federal budget has a reasonable probability (our base case scenario) of reaching operational balance – revenues equal expenses excluding interest expense – by FY2015. This is an amazing turnaround and it means that budget deficit is now shrinking faster, meaning reduced supply of US Treasuries, even as the Federal Reserve tapers its quantitative easing program, rendering any net impact on the bond market from QE-tapering as moot. Let’s put this shrinking deficit into perspective.

The US federal budget deficit surged to just over 9% of GDP or about $1.4 trillion in FY2009, including interest expense. The messy bankruptcy of Lehman Brothers and the bailout of AIG September 2008 had spooked financial markets. Under President Bush, then-Treasury Secretary Paulson had gone to the US Congress for a trillion dollars of emergency spending. As this money was disbursed, the budget deficit ballooned. For some analysts, given the depth of the recession and huge job losses, it seemed that it could take a decade or more to return to fiscal stability. That negative analysis could not have been more wrong.

The US economy has been growing in real GDP terms since late 2009. And despite losing over 850,000 jobs in the government sector, private job growth has been quite strong since 2010. Corporate profits have had a very robust recovery over the last several years, and the consumer has become more confident. So despite government retrenchment at all levels – federal, state, and local – the private sector has fueled surging government tax revenues. Inflows to the US Treasury were up 8% in FY2013 compared to FY2012, for example.

If the US economy can post growth above 3% in real GDP terms in 2014, as we think it can (see “US Economy: Solid Momentum Entering 2014” at www.cmegroup.com/putnam), then tax revenues are likely to continue to grow at a healthy pace. In the meantime, a divided US Congress and no major new spending legislation have meant that federal government expenditure growth has been virtually non-existent for the last few years. This is a powerful combination – robust tax revenue growth and flat expenditures – for deficit reduction. Our base case scenario is for about a federal budget deficit in FY2015 of 1.5% of GDP, and since interest expense is likely to be in the 1.5% to 2% range, this translates into a balanced operational budget. The Congress Budget Office is not as optimistic, but one can expect revisions in their long-term projections should the economy stay as healthy as we hope.

For all this short-term good news, of course, the longer-term challenges to the US federal budget coming from an aging population and a much slower growing labor force should not be minimized. Nevertheless, for those market participants trying to analyze what a the Fed QE-taper might do to bond yields, it is an interesting counterpoint to recognize that US Treasury supply is actually shrinking faster than the Fed is reducing its purchases. 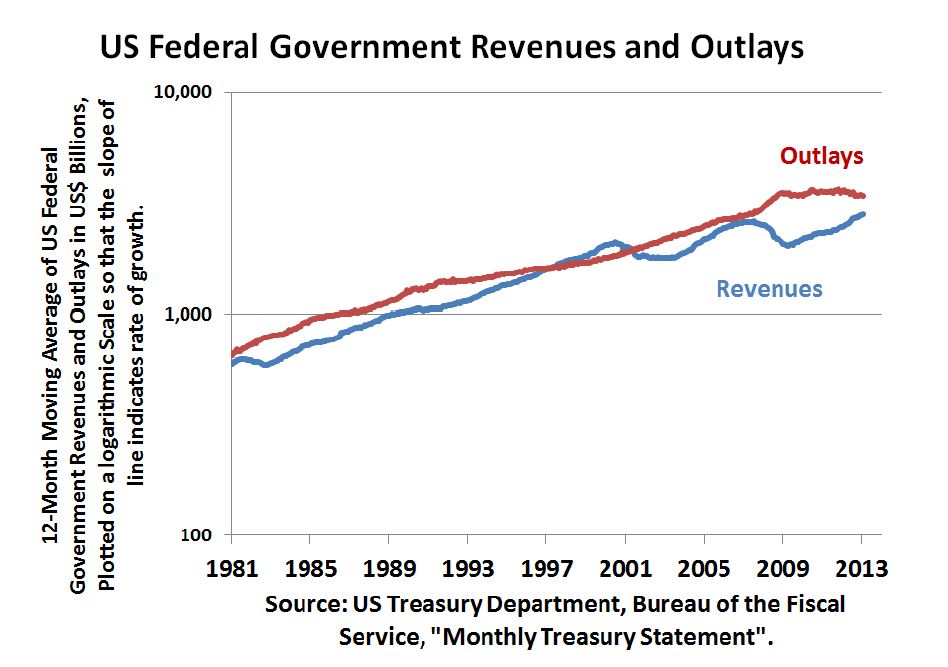 At work, I am sometimes asked this simple but challenging question: “Where does VIX come from?”  There is a reason I am asked this – I am our company’s product manager for volatility indices.  But I admit that I have struggled to come up with an approachable way to explain the methodology of the CBOE Volatility Index (VIX).  I am going to give it shot, though, in this post.  Wish me luck.

An Overview of VIX

Any good answer should start with a summary.  Here is an overview of how VIX is calculated.

The CBOE Volatility Index, which communicates the range of possible outcomes investors expect from the US equity market 30 days from now, is derived from the prices of options based on the S&P 500.  Because it always looks 30 days forward, VIX cannot be based on options attached to a single expiration date, as these are hard set.  The VIX methodology instead asks that we determine the implied volatility of options of two expiration dates, specifically those of the next two months. We then essentially draw a line between those two volatility figures to estimate the expected volatility 30 days ahead.

But how do you figure out the volatility implied by the options of the next two expiration dates in the first place?  This involves a messy formula, which can be distilled down into two key steps: selecting the options and then weighting them properly.  For the VIX calculation to be robust, the options contracts that have no bidders and sellers need to be weeded out.  To do this, we look at the options tied to various strike prices and check whether buyers and sellers are quoting prices for them.  If they are, then they are included.  But if there are no quotes, then the options contract for that particular strike price are excluded from the calculation.  This tends to happen more and more as you look at options based on strike prices further from the S&P 500 index level.  When you get to the point that there are no price quotes for two consecutive strike prices, you stop looking.  Those options that already qualified will be used to calculate VIX.

After you select your options, you have to weight them in a way that makes sense.  The VIX methodology assigns more weight to options associated with low strike prices than to those with high prices.  This is done for a specific reason – to counteract the fact that options with high strike prices tend to be more sensitive to changes in expected volatility.  By assigning more weight to options with less sensitivity to changes in implied volatility, you can create a set of options that is more uniform in its capacity to contribute to the final VIX level.  The sensitivity of far out of the money call options will not have an outsized impact on VIX, as they would have had without this adjustment.

One consequence of low dispersion, in other words, is that the gap between the best and the worst performers is smaller than it would be if dispersion were higher.  If that’s the case, then the current environment is not especially good for demonstrating stock selection skill.

On the other hand, it’s frequently been argued in recent weeks that since the correlation of stocks within the U.S. equity market is falling, 2014 is poised to be a “stock-picker’s market.”  Correlations have indeed been declining — which means that correlation and dispersion seem to be delivering inconsistent messages.  Is one “right” and the other “wrong?”

The reason for this apparent contradiction is that correlation and dispersion measure two different things.  Consider a simple example, examining the behavior of two stocks over a 20-day holding period:

The correlation between A and B is -1.00.  The two stocks are ideal diversifiers, since  moves in one completely offset moves in the other.  The return of both stocks, however, is the same 0%.  Regardless of which one the investor bought, his return would be the same.  (The only reward available for selection strategies is in fact a penalty, since holding either stock entails more volatility than holding both.)  That doesn’t sound like a good environment for stock picking.

The correlation between C and D is 1.00, which is to say that both stocks always move in the same direction.  Holding both has the same volatility as holding either stock individually.  Does that mean that stock selection is irrelevant?  Hardly, since C’s return (9.2% as shown) is more than double D’s return (4.5%).

Dispersion is a measure of magnitude.  It tells us by how much the return of the average stock differed from the market average.  In our hypothetical exercise, there’s no dispersion at all between A and B, and a considerable dispersion between C and D.  High dispersion gives skillful stock pickers a better chance to showcase their abilities.

Correlation is an essential tool in understanding portfolio diversification.  But as a measure of the magnitude of opportunity available to selection strategies – dispersion is the better metric.