Hear the impact of the Syrian tension on oil and why the effect on copper might be different than in historical wars.

The S&P GSCI® and Dow Jones UBS Commodity Index both fell in September, returning -3.4% and -2.6%, respectively.

Some highlights from the S&P GSCI® include:

Some highlights from the DJ-UBS Commodity Index include:

Preferred stocks have a split personality, part equity and part bond. The bond characteristics of preferred stock has, at least for the time being, become the ‘Mr. Hyde’ of the asset class.  The high dividends that preferred stock owners enjoy can be compared to future interest payments of bonds. Like bonds, the prospect of the Fed tapering and causing rising interest rates has helped bring the 2013 YTD returns for the S&P U.S. Preferred Stock Index to -1%.  Meanwhile, the S&P 500 has seen over 19.6% total return.

The dividend cash flow ends up being an important characteristic of the preferred asset class. With a yield over 7%, the S&P U.S. Preferred Stock Index reflects a yield of over 120bps higher than U.S. high yield bonds as tracked by the S&P U.S. Issued High Yield Corporate Bond Index. 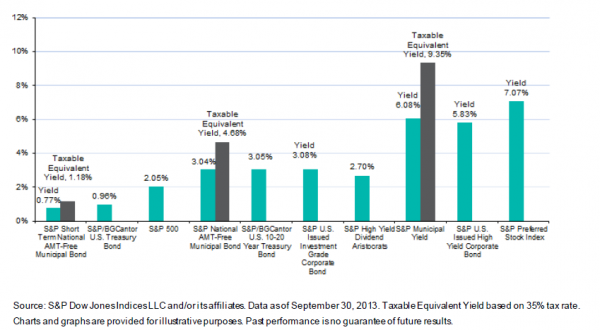 Over the long haul, those higher dividends have helped create a total return advantage over the S&P 500.  A five year look back tells the story as the S&P U.S. Preferred Stock Index has returned over 16%, while the S&P 500 returned over 11%.

Which future will it be for U.S. Preferred Stock, Dr. Jekyll or Mr. Hyde?

One of the biggest things missing from the never ending healthcare debate is hard data.  “Man-on-the-street” interviews reveal that some people don’t realize that Obamacare, the Patient Protection and Affordable Care Act and the ACA are all one and the same.  The absence of factual data is most crucial when examining the cost of healthcare.  One reason is that healthcare is a huge industry spread across the country and accounting for between a fifth and a sixth of GDP.  A second issue is that detailed data dealing with individual is protected by law and unavailable.

The new S&P Healthcare Claims Indices launched today are a big step toward relieving the lack of data.  These indices cover costs and utilization of inpatient and outpatient healthcare services and prescription drugs.  They are based on actual health insurance claims with data provided by over 30 large national insurance plans. These indices will provide hard numbers to answer questions about how the cost of healthcare is rising or falling across the U.S. and for selected regions, states and cities. More information and the press release can be found here.

Branded prescription drugs are usually sold by only one company which developed the drug and owns a patent on the drug giving it a monopoly position in the market for that drug. Generic drugs are often sold by a number of companies, the patent may have expired and the market is more competitive.  Since the S&P Healthcare Claims Indices collect data on both kinds of drugs separately, we can track the difference.  The chart shows the unit costs for branded and generic. Generic unit costs vary widely, occasionally falling and never rising faster than 5% annually.  Branded drug costs rise at 10% or more annual and appear to be accelerating. 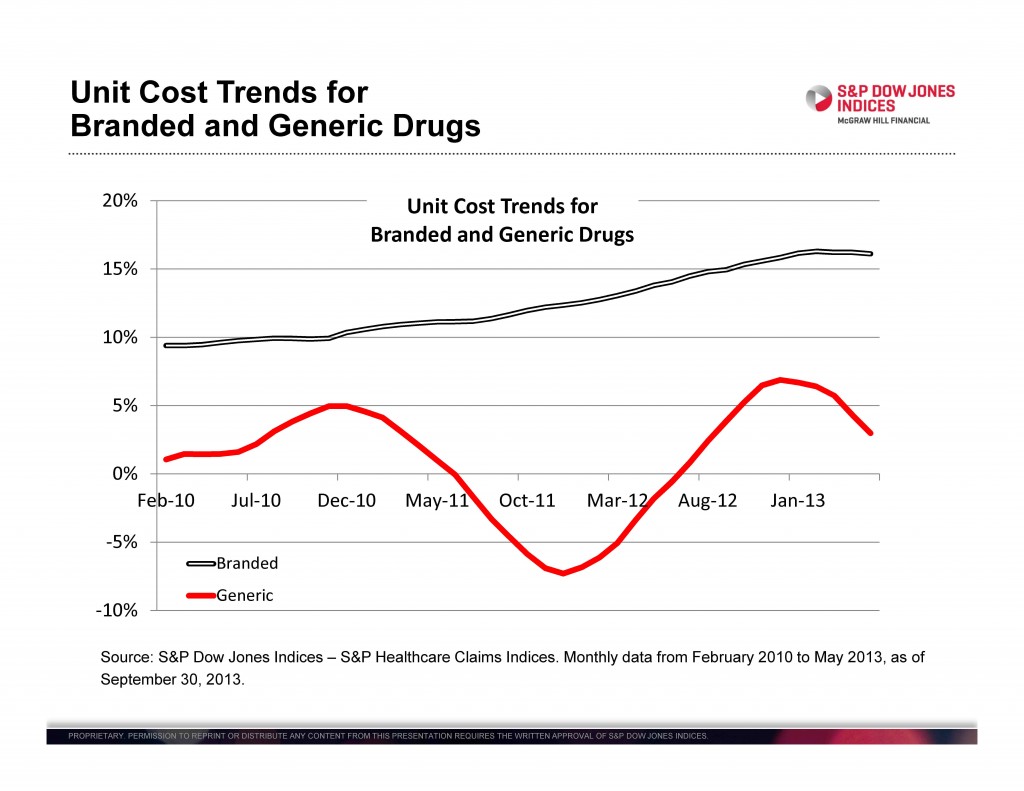 Many people see hospitals with their increasingly complex technology and large staffs as the big factor in rising healthcare expenditures.  Inpatient hospitalization costs are rising, but costs for outpatient care are actually rising faster, as seen in the second chart.  One cause may be efforts to move tests, examinations and routine surgery to outpatient centers from hospitals.  Whatever the underlying cause is, concentrating only on hospitals won’t control some rapidly rising health care costs. 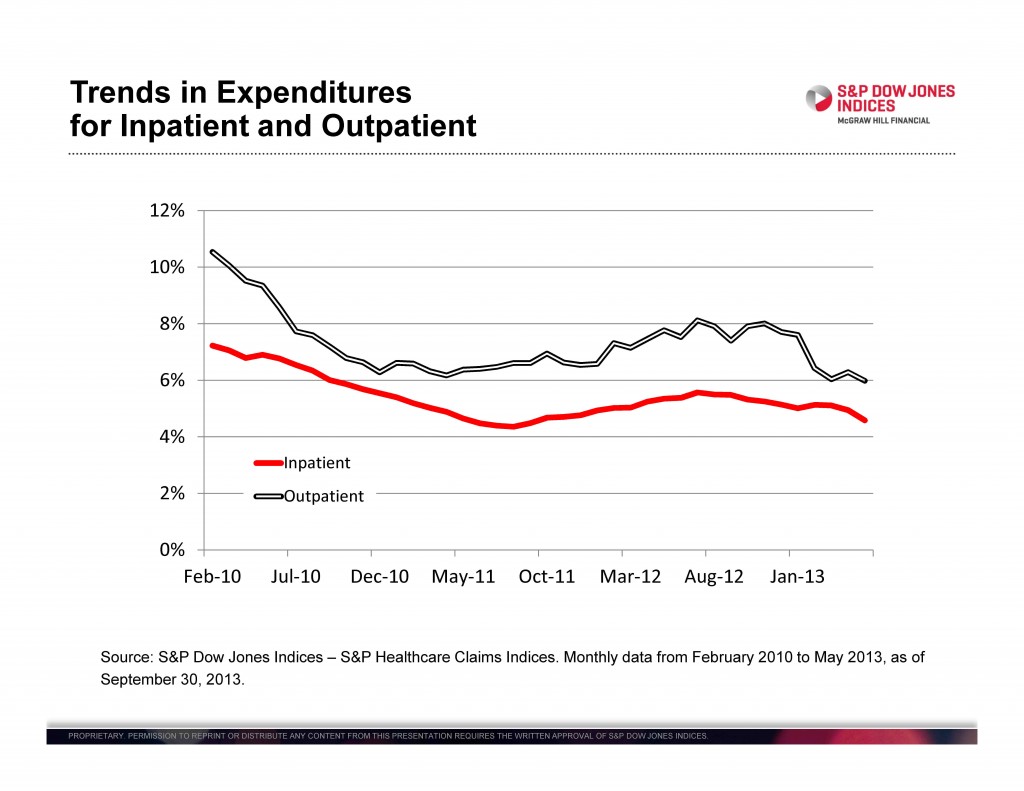 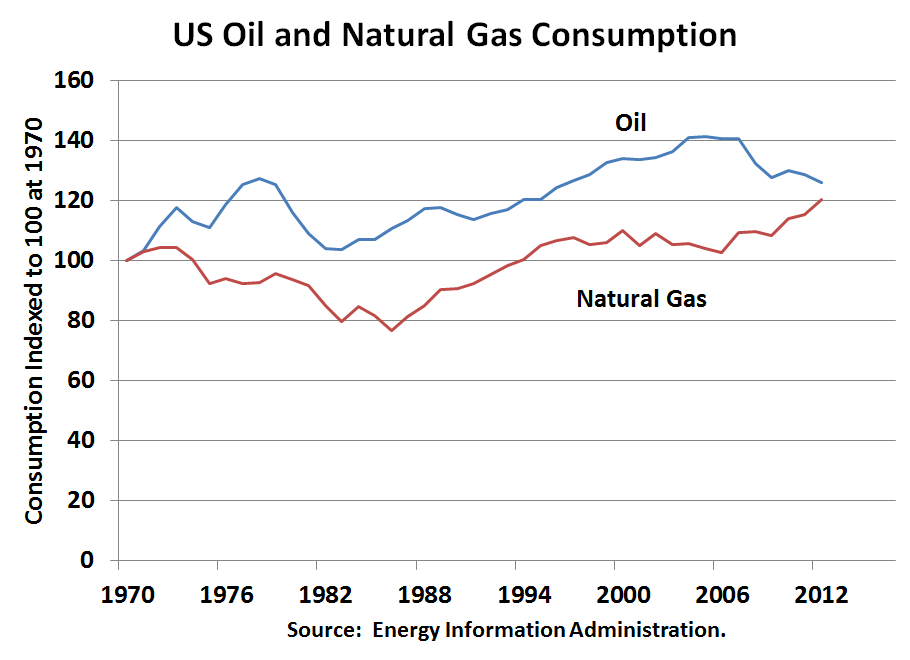 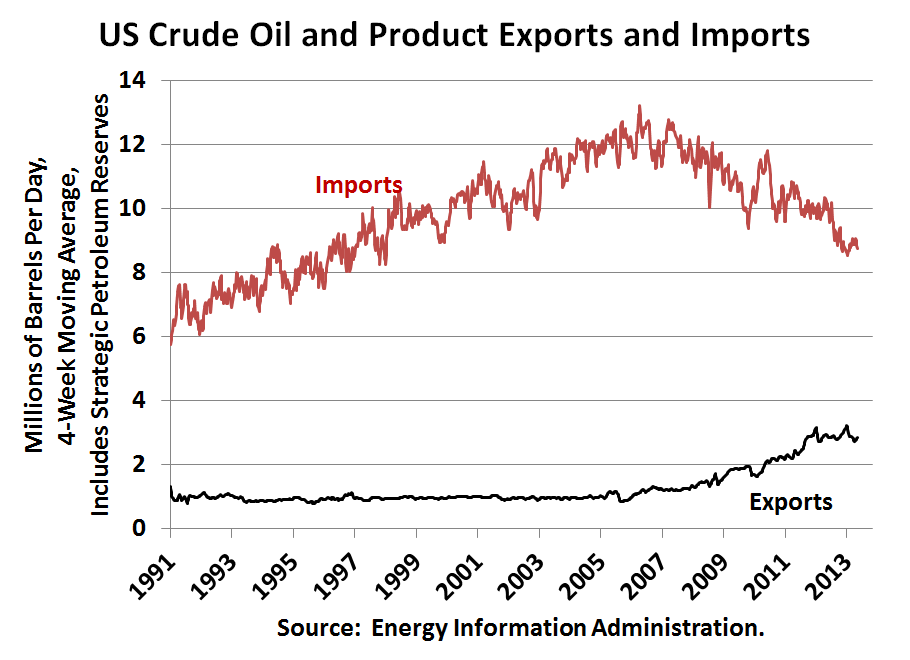 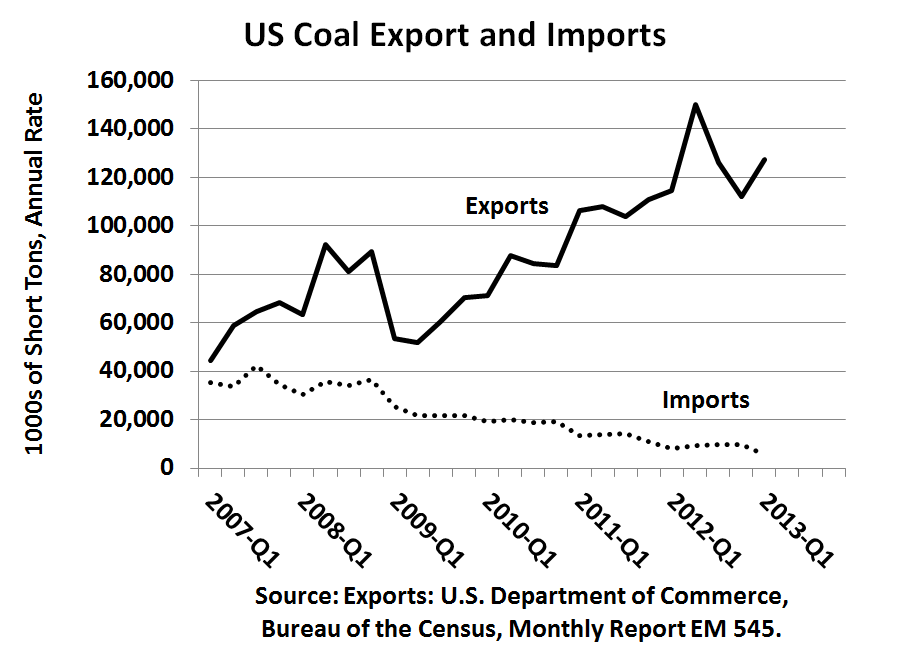 The substantial increase in the supply of energy from the United States is providing the US with an economic growth dividend. Since 2005, which we use as our base year since it roughly represents the year before the energy revolution in the US started, crude oil production in the US has increased 29% and natural gas production has grown 33%. The numbers are impressive and they continue to grow.

Quantifying the US energy boom’s contribution to economic growth is not easy, even though it is obviously substantial.  As is the often the case with economic impacts, the indirect effects can be much larger and more powerful over time than the direct effects.  This makes quantifying the growth benefits to the US economy of the energy supply boom more of an art than a science.

In the US, we are seeing new infrastructure being built to move oil and gas production to users.  Shifting relative prices have encouraged substitution of one form of energy for another and have stimulated construction, including new industrial plants near the sources of the new supplies, especially natural gas.  In some cases natural gas has replaced coal as fuel for generating electricity, and the displaced coal has served to increased US exports.  Natural gas has not generally been considered a transportation fuel, yet its abundance and lower price per BTU is generating greater interest to power bus fleets as well as train locomotives.

Taking a very broad view of the indirect stimulus coming from the new oil and natural gas production, the incremental advantage to the US is probably between 0.5% and 1% of extra real GDP per year, and this energy growth dividend may last for the next five years or more as production continues to increase, as the distribution infrastructure is built, and as industrial users make new investments and build new plants to take advantage of the energy boom.

As noted, our energy growth dividend assessment is more of a back of the envelope calculation than a detailed quantification.  Some energy analysts would go with a higher impact, while some traditional macroeconomists are on the lower side.  No one, however, is downplaying the long-term importance to the US economy.  What is clear is that the energy boom has come at a very good time for the US economy relative to other industrial economies struggling with the lingering aftereffects of the Great Recession of 2008-2009.

All examples in this report are hypothetical interpretations of situations and are used for explanation purposes only. The views in this report reflect solely those of the authors and not necessarily those of CME Group or its affiliated institutions. This report and the information herein should not be considered investment advice or the results of actual market experience.