How Now The Dow?

How Now The Dow?

The Dow Jones Industrial Average® (DJIA) will celebrate its quasquicentennial on Wednesday, which marks exactly 125 years since the index’s first publication. Before one of the world’s most watched and widely cited benchmarks hits this milestone, here is an overview of “The Dow®,” including its origins, what has stayed the same over the years, and what hasn’t.

Not the First Index to Measure the U.S. Equity Market… But Not Far Off!

Although many believe the DJIA is the first index to measure the U.S. equity market, that distinction actually goes to the Dow Jones Railroad Average. Charles Dow & Edward Jones began publishing the Railroad Average in 1884, and its composition reflected the importance of railroads to the U.S. economy—9 of the index’s 11 constituents were railroads, with Western Union and the Pacific Mail Steamship Company completing the set.

Although the Railroad Average (now known as the Dow Jones Transportation Average) reflected the major drivers of the U.S. economy at the end of the 19th century, Charles Dow thought that industrial companies would be crucial contributors to U.S. economic growth. Hence, the DJIA was born on May 26, 1896, as a way to track trends in the U.S. market. It initially contained 12 stocks, expanded to 20 stocks in 1916, and increased to the now familiar stock count of 30 in 1928.

Charles Dow’s view about industrial companies proved correct as manufacturing achieved greater prominence in U.S. equity markets: manufacturing companies accounted for more than 50% of the U.S. equity market in 1950. The DJIA’s composition evolved to reflect this trend, as several manufacturers were added to the index by the middle of the 20th century. More recently, the DJIA captured the increased importance of Information Technology companies, which currently account for around 21% of the DJIA’s weight.

The index’s ability to capture sectoral trends is not surprising since it is designed to measure the market and so seeks to offer suitable sector representation, although the Transportation industry group and the Utilities sector are excluded as these companies have their own Dow Jones Averages. 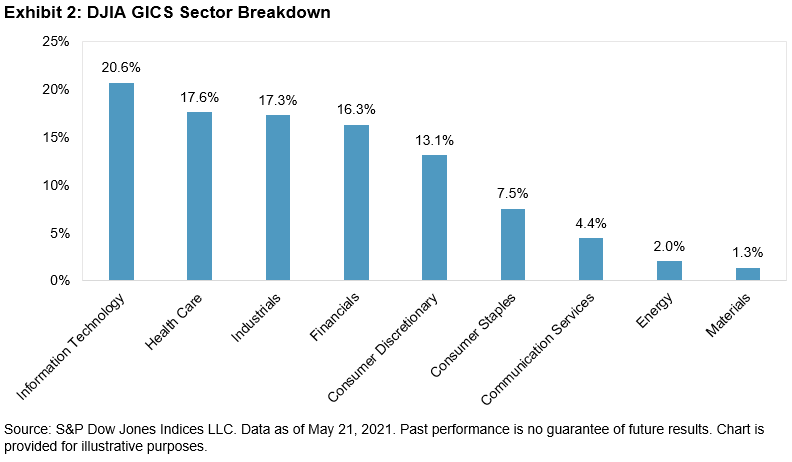 No Set Quantitative Rules, But a Few Updates along the Way

The DJIA’s stock selection is not governed by quantitative rules. Instead, the Averages Committee makes constituent changes on an as-needed basis. Stocks are typically added only if the company has an excellent reputation, demonstrates sustained growth, and is of interest to a large number of investors. Eligible companies must be incorporated and headquartered in the U.S., and most of their revenues should come from the U.S. as well.

The resulting DJIA index levels offer a glimpse into U.S. equity market trends over the past 125 years. Such a lengthy history can be extremely useful for contextualizing today’s market movements, especially as it allows for comparisons across a range of market environments. 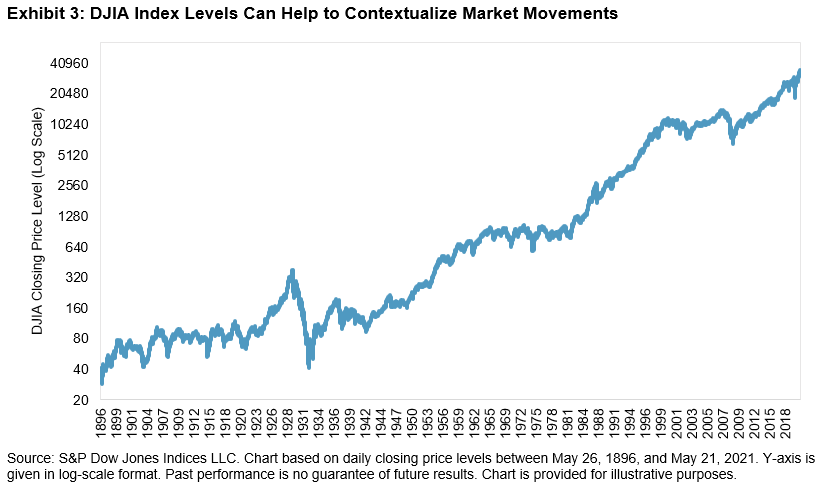 The DJIA has served as one of the preeminent gauges of the U.S. equity market for the past 125 years. Its history makes it especially useful for those looking to contextualize the market’s movements. Hence, at least some market participants may find themselves asking the question, “how now The Dow?”

The S&P ESG Index Series is aimed toward those who are looking to incorporate environmental, social, and governance (ESG) considerations into their investment products. These indices seek to provide benchmark-like returns by having the same broad industry group exposure as the underlying index while simultaneously offering an enhanced ESG profile.

How Is the S&P Europe 350 ESG Index Constructed?

Please see the index methodology for a full breakdown of the index construction rules.

The results of the April 2021 index rebalance emphasize the importance of incorporating S&P DJI ESG Scores into the index methodology. Seven of the top 10 constituent exclusions were due to ESG scores (see Exhibit 1).

For instance, Novo Nordisk has had a deteriorating ESG score over the past few years, decreasing from 98 in 2018 down to a score of 69 in 2020. Notable areas of material weakness for the company are human capital development and innovation management.

The S&P Europe 350 ESG Index had 246 constituents as of April 2021, as companies with low-ESG scores or those companies conducting business activities which are not consistent with ESG norms from the underlying index were excluded. The index offers an improved S&P DJI ESG Score of 6.85%* over the benchmark, as well as a low tracking error of 1.04%. The result is a broad European index that incorporates robust ESG objectives for sustainably conscious investors.

The onset of the COVID-19 pandemic a year ago produced the highest-ever monthly volatility reading for the S&P 500® in March 2020. Volatility began to decline as the market’s recovery began, but if we measure volatility on a 12-month trailing basis, as we do in Exhibit 1, we see the sustained impact of last year’s ructions. 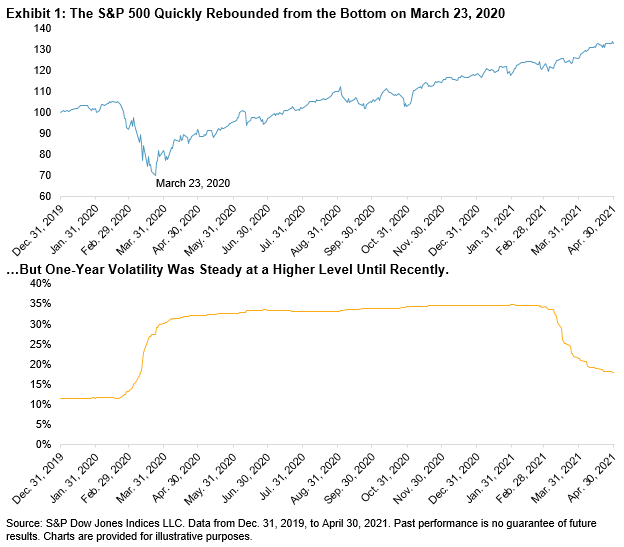 Not only is overall market volatility now close to pre-pandemic levels, the same seems to be true for all sectors of the S&P 500. Exhibit 2 shows that one-year volatility declined significantly in every sector compared to three months earlier. While volatility in all sectors declined by at least 10%, the biggest drops came in Energy, Financials, and Utilities, which declined by approximately 20%.

Significant changes also took place in the latest rebalance for the S&P 500 Low Volatility Index, effective after market close May 21, 2021. The new allocation, as shown in Exhibit 3, is much closer to the allocations of pre-pandemic times. Stalwarts like Financials, Real Estate, and Utilities resumed their places in the index; Utilities added 11% to its weight. Health Care, Communication Services, and Technology (sectors that were the lifelines of locked-down livelihoods) scaled back to make room. Energy’s volatility remained too high to make the cut. In all, 34 names changed in the index, the largest change since the record rebalance of May 2020.

The S&P 500 Low Volatility Index chooses its constituents based on volatility at the stock level, but sector level volatility can give us insight into the dynamics that drive the changes. Hopefully, in this instance, sector volatility is also a narrative of better things to come.

After the dominant performance of large-cap technology stocks in 2020, concentration concerns naturally come to mind. The HHI, or Herfindahl-Hirschman Index, is a widely-used concentration measure; it’s defined as the sum of the squared index constituents’ percentage weights (usually taken as whole numbers). For example, the HHI for an equally-weighted 50 stock portfolio is 200 (50 x 22); the HHI for the S&P 500 Equal Weight Index, which comprises 500 stocks, is 20 (500 x 0.22).

Other things equal, a higher HHI indicates an increased level of concentration, but as the simple illustration above shows, even for completely unconcentrated equal weight portfolios, the HHI level is inversely related to the number of names. So as we use the HHI to make comparisons within the Tech sector over time, we need to use an adjusted metric. The adjusted HHI is the sector’s HHI divided by the HHI of an equal-weighted portfolio with the same number of stocks. A higher adjusted HHI means that a sector is becoming more concentrated, independently of the number of stocks it contains.

Exhibit 1 shows a box-plot of the S&P 500 Information Technology’s adjusted HHI, using monthly observations since January 1990. We observe a median value of 4.3, interquartile range from 3.9 to 5.4, minimum of 2.7, and eight large outliers. Interestingly, the current adjusted HHI level of 7.2 is at the 95th percentile, indicating a historically high level of concentration for the Technology sector. 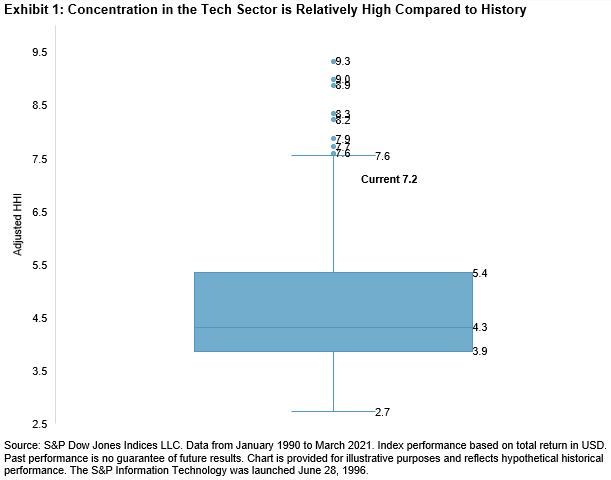 Exhibit 2 illustrates the relationship between the Tech sector’s adjusted HHI with the relative performance of the S&P 500 Equal Weight Information Technology compared to its cap-weighted counterpart. After peaks in concentration (such as during 1990, 1999, and 2002), equal-weighted Tech seems to outperform. 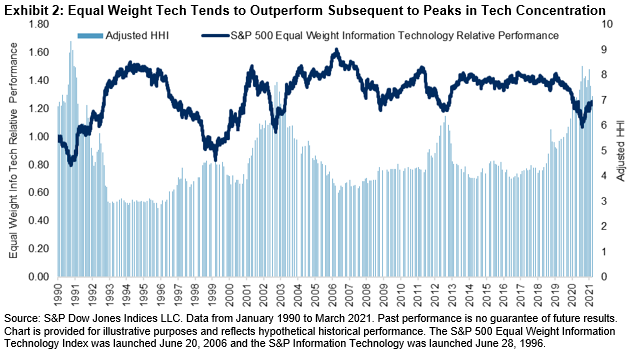 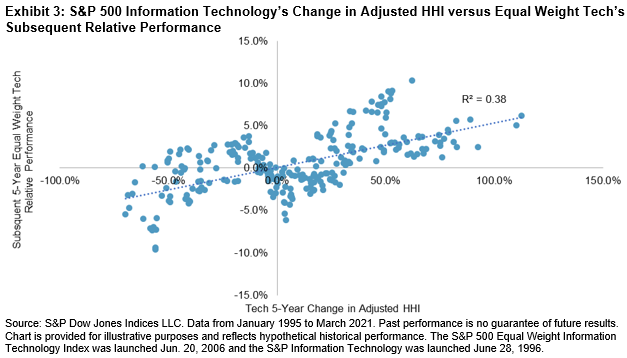 The strong performance of large-cap Tech names last year led to an increase in the sector’s concentration levels.  History tells us that after peaks in concentration, equal-weighted Tech has tended to outperform. We can look to history to provide perspective on these trends.