Our latest S&P STRIDE dashboard showed a dramatic increase in the cost of retirement income for various retirement dates (vintages) in Q2.  For example, the present value of an inflation-adjusted stream of cash flows equal to USD 1 per year – or USD 1/12 per month – starting in 2065 and ending 25 years later, rose 19.07% since March.  This increase nearly matched the S&P Composite 1500’s 20.8% quarterly gain.

Even more striking was the fact that the cost of retirement income rose above USD 25 for most vintages, the first time any such measure recorded a quarter-end reading above USD 25 (based on data since January 2016). A key driver of this observation was negative real interest rates.

Calculating the present value of inflation-adjusted cash flows requires us to use real interest rates for discounting; “real” meaning that they account for inflation expectations.  Exhibit 2 shows the real yield curve at the end of June.  Appendix II in the S&P STRIDE index series methodology outlines the process for constructing the curve but suffice to say that it is calculated by:

Exhibit 2 shows that the entire U.S. real yield curve was negative at the end of June. Hence, the present value of each hypothetical monthly payment was greater than USD 1/12, resulting in cost of retirement income figures over USD 25 for most vintages. 2005, 2010 and 2015 offered the exceptions as the post-retirement vintages have fewer than 25 years of payments remaining. 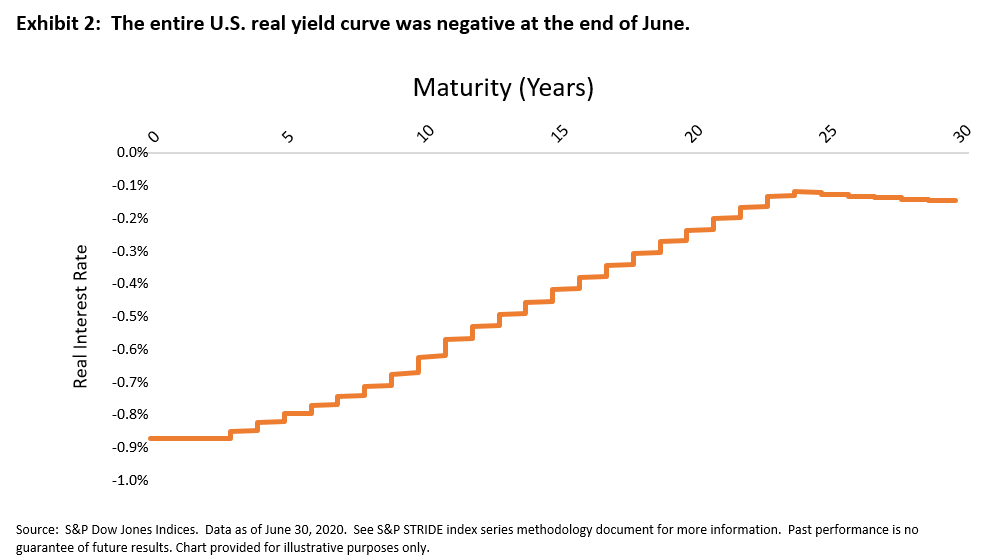 The sizeable monetary stimulus likely fueled this as economic theory tells us that, all else equal, increases in the money supply are inflationary – in theory, giving people additional money to spend drives up demand for goods, causing prices to rise. 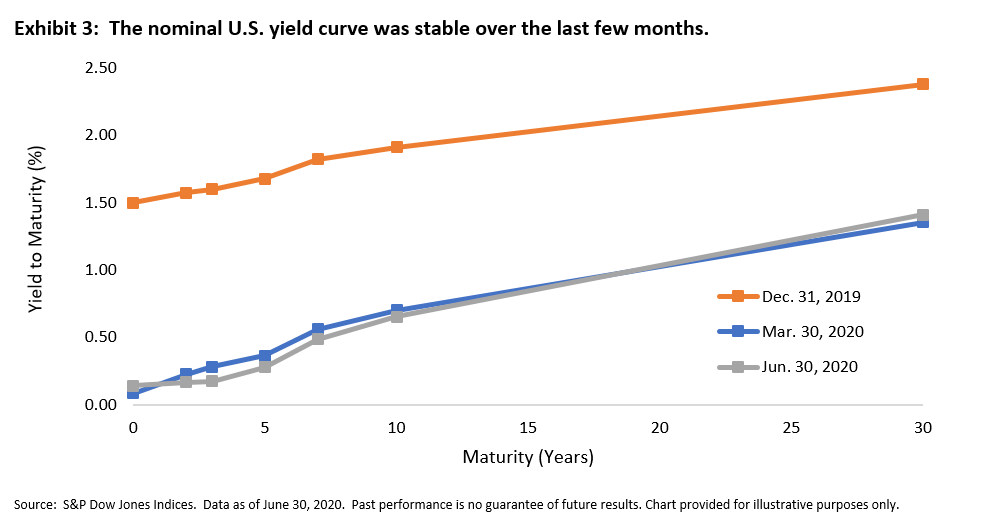 Of course, inflation may not rise as expected: people made similar predictions following central bank intervention during the Financial Crisis. Nonetheless, since one of the main risks for retirees is not having enough inflation-adjusted retirement income to support their desired standard of living, investors may wish to consider retirement strategies that have an explicit focus on reducing the volatility of retirement income – such as the S&P STRIDE index series.  Indeed, post-retirement S&P STRIDE vintages have far higher TIPS allocations than their S&P Target Date counterparts, making them more insulated against changes in expected inflation.

To sign up for the S&P STRIDE: Cost of Retirement Income dashboard, please use this link.