The Australian technology industry roared back to life following a steep first quarter selloff. After peaking on Feb. 17, 2020, the S&P/ASX All Technology Index plunged 46.8%, bottoming on March 23 at the height of the pandemic-led market selloff. Around this time, however, investors realized that Australia’s technology-oriented companies—many of which are involved in innovative payment processing solutions, software development, and in supporting e-commerce across various industries—were likely to be less affected by—and may even benefit from—the pandemic-related economic and social dislocations.

Between the low on March 23 and June 19, 2020, the index gained a whopping 84.4%, leaving it just 2% off its all-time high and up nearly 10% YTD. Meanwhile, the broad market S&P/ASX 200 remained down about 10% for the year. As illustrated in Exhibit 1, the S&P/ASX All Technology Index outperformed all major sectors of the Australian stock market by a wide margin YTD and over the past 12 months. 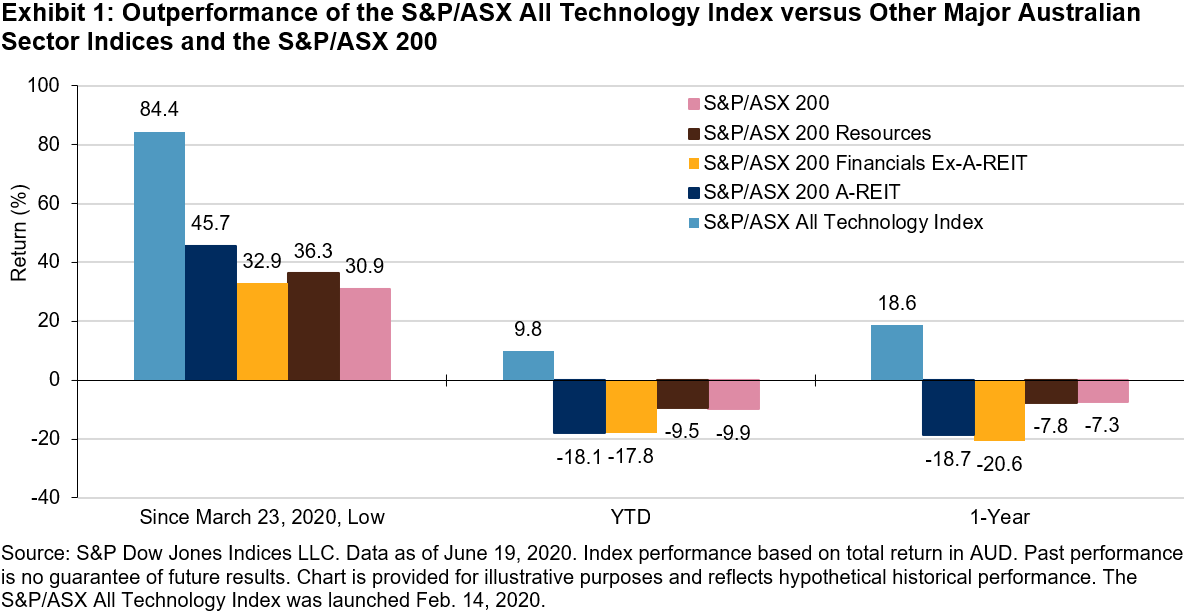 Drilling down into stock-level performance, we can see that although Afterpay was a clear standout, gaining nearly 560% and accounting for about one-quarter of the index’s total return since the March 2020 low, the overall rebound in index performance was broad based. In fact, all 46 constituent companies posted positive returns between March 23 and June 19, 2020, and about one quarter of the total index return was generated by companies outside of the top 10 contributors. 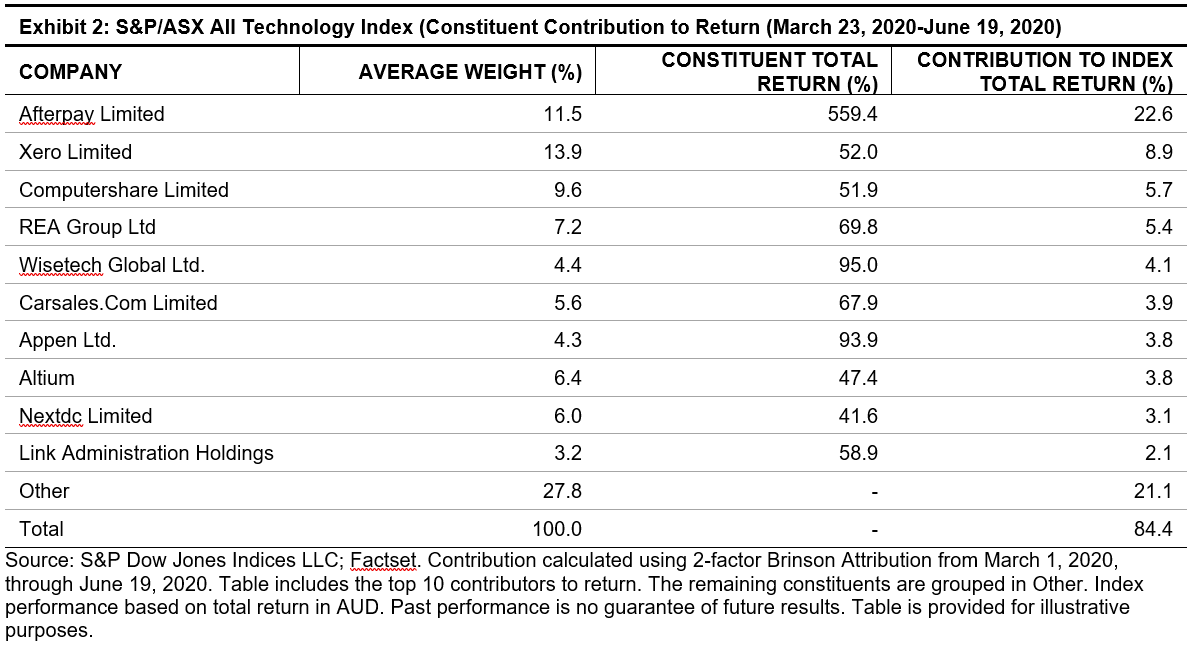 The S&P/ASX All Technology Index underwent its first rebalance since launching in February 2020, and the review resulted in five company additions and one deletion. Best known for its online job matching platforms, Seek was added to the index following its GICS reclassification from Human Resources and Employment Services, which is not eligible for inclusion, to Interactive Media and Services, which is eligible. With a float market cap in excess of AUD 7 billion, Seek entered the index as the third-largest constituent with a weight of 8.7%. Nitro Software and Tyro Payments, both of which went public in December 2019, were also added, as were RPMGlobal Holdings and Temple & Webster Group. Over the Wire Holdings was the only existing constituent dropped from the index.

Exhibit 3 illustrates the index composition changes between the end of 2019, the close of June 19, 2020, prior to the rebalance, and the open of June 22, 2020, which reflects the rebalance changes. Afterpay’s nearly 90% YTD share price gain propelled it to the top position, as its index weight nearly doubled. The rise of NextDC from ninth to sixth place was also notable. Finally, the addition of Seek helped to improve the diversification of the index, reducing concentration among the largest components. 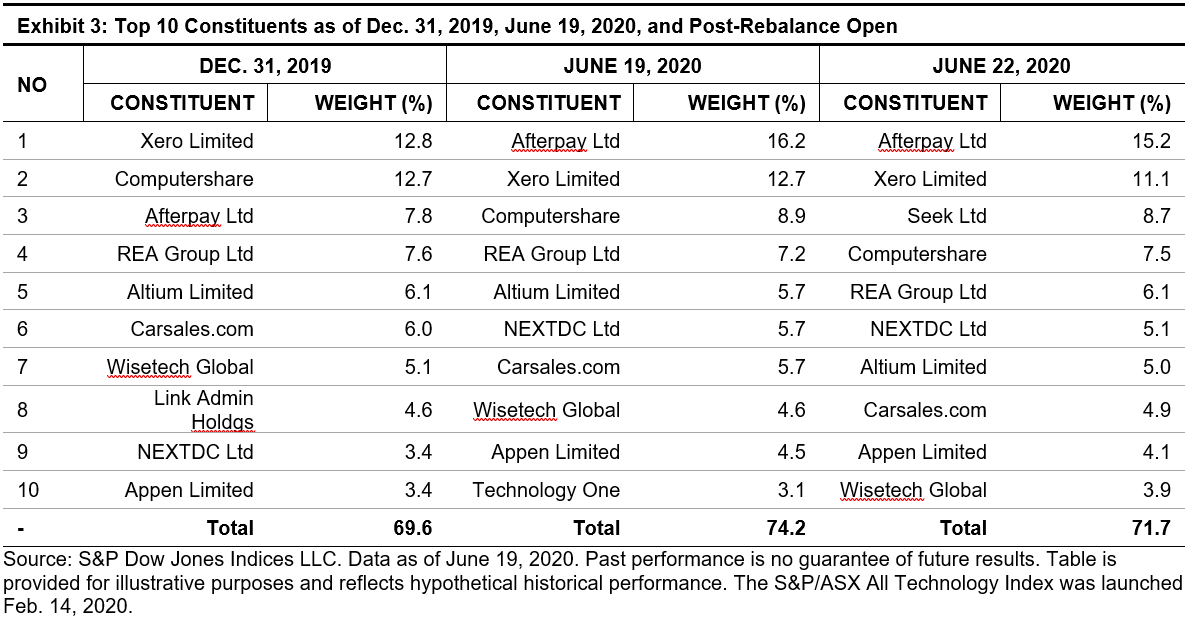 The combination of solid returns, the addition of Seek and new technology IPOs has further increased the depth and breadth of Australia’s technology industry. As of June 22, 2020, the total market cap of the S&P/ASX All Technology Index was nearly AUD 116 billion, up 26% from the end of 2019 and nearly double the AUD 63 billion reached at the end of 2018. The index also reached an all-time high in the number of constituents at 50.

It’s been a wild ride since the launch of the S&P/ASX All Technology Index in February 2020. However, the Australian technology industry has been resilient and clearly demonstrated its role as a unique, high-growth area of the Australian equity market during difficult times.