The S&P GSCI ended 2019 up 17.6%. This was the S&P GSCI’s 10th-strongest performance since 1990 and its best annual return since the heights of the so-called commodity super cycle in 2007. Across the commodity markets, gains were driven by the petroleum complex and precious metals, while agriculture and livestock detracted from headline performance.

Petroleum prices climbed during the year due to sanctions on Iran and Venezuela, as well as continued OPEC+ production cut compliance. The S&P GSCI Crude Oil ended 2019 34.1% higher, but the bulk of the gains came in the first quarter after the U.S. introduced sanctions on Venezuela. As the new decade commences, the oil market will be forced to negotiate swelling supplies, particularly from the U.S., and some indications of weakening global demand. The U.S. is on track to be a net petroleum exporter on an annual basis for the first time in 2020. It was not all positive news for energy commodities this year. Natural gas ended the year with the poorest performance of all the single‑commodity S&P GSCI constituents. The S&P GSCI Natural Gas was down an eye-watering 32.3% for the year.

Gold proved one of the most popular assets for investors in 2019. The S&P GSCI Gold posted its best performance since 2010, gaining 18.0%, driven by safe-haven buying powered by escalating geopolitical tensions, a protracted trade war, and quantitative easing by major central banks. As more government bonds across the globe displayed negative yields throughout 2019, gold remains well positioned as a safe-haven alternative for investors going into the new year. The S&P GSCI Palladium ended the year 64.3% higher, continuing a multi-year price appreciation driven by its use in car exhaust to defuse emissions.

Among the industrial metals, nickel was the standout performer in 2019. While well off its late summer highs, the S&P GSCI Nickel ended 2019 up 32.8%. Supply constraints, in the form of an export ban from Indonesia, dictated price action in the nickel market for the bulk of the year. It would be folly not to mention the stellar performance of the S&P GSCI Iron Ore, which ended the year 83.1% higher, a function of several significant supply curtailments and persistent Chinese steel demand.

The agricultural markets struggled this year under the weight of the protracted U.S.-China trade war and plentiful global supplies. One of the main features of December’s “Phase One” trade deal between the U.S. and China was China’s commitment to purchase a large amount of U.S agricultural goods. There is skepticism that China will be both willing, and able, to purchase such volumes of U.S. commodities and, therefore, if these purchases will be enough to stimulate demand for agricultural commodities in 2020. Wheat was the outlier in the grain complex, with the S&P GSCI Wheat ending the year up 9.4%, a third straight year of gains, on tightening supplies, particularly from Australia, which is in its third year of drought. 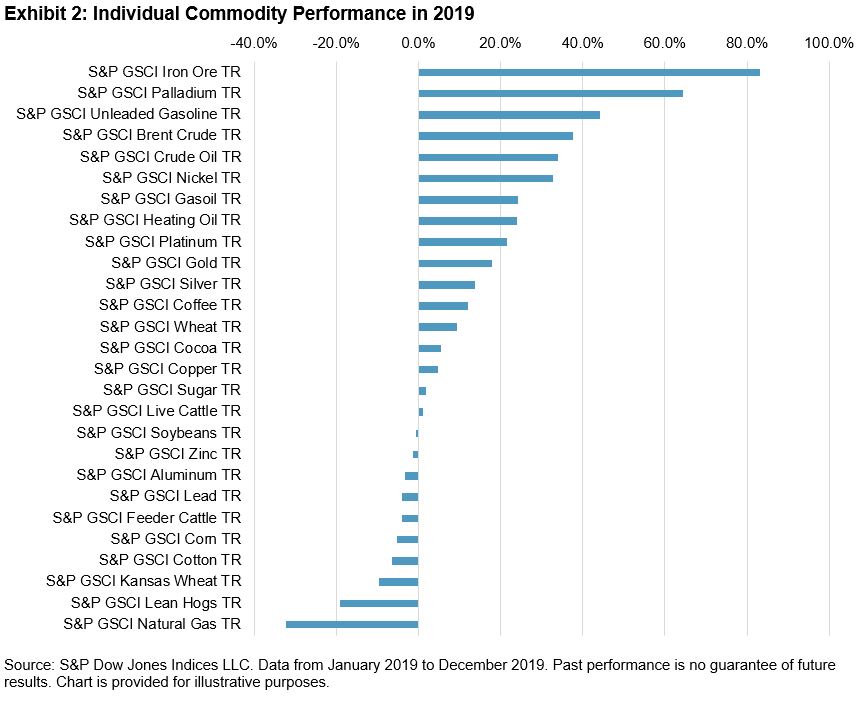