Even eagle-eyed commodities investors might be surprised to learn that lean hogs have been one of the best-performing individual commodities so far in 2019. As of April 5, 2019, the S&P GSCI Lean Hogs was up an impressive 19.5% since the beginning of the year, outperforming the broad S&P GSCI (up 18.4%), and up 46% since Feb. 20, 2019. While lean hogs might seem like a trivial asset to cover in this medium, even in the relatively idiosyncratic world of commodities, it illustrates an important characteristic of individual commodity markets, namely their usefulness in expressing investment theses that are dependent on unique geopolitical, demographic, structural, weather, and health or disease factors. It also provides a timely reminder of the impact that significant price adjustments in real assets, such as commodities, have on underlying levels of economic activity, inflation, and fiscal and monetary policies. 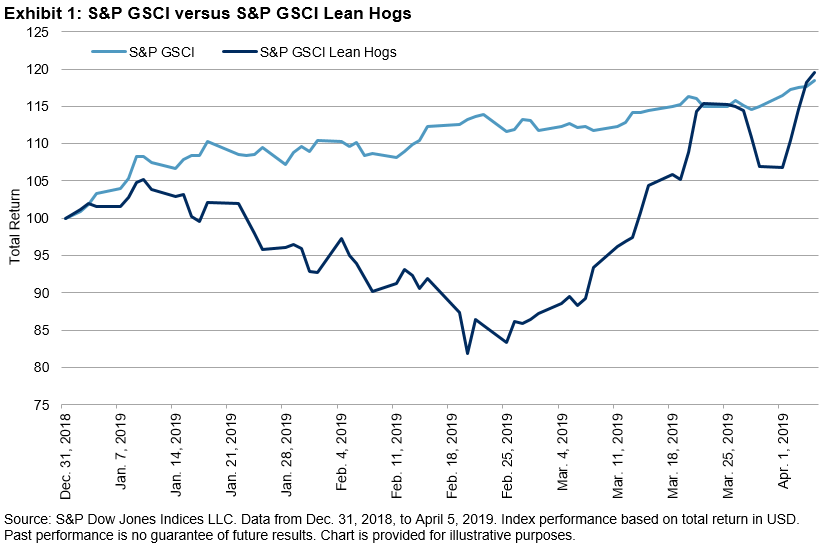 The driving force behind the rally in lean hog prices has been a disease outbreak and its expected impact on supply. Lean hogs spent the first two months of the year in the doldrums, fixated on higher-than-expected levels of U.S. pork production and ongoing market access restrictions for U.S. pork in key export markets. By March, these factors were dwarfed by the realization that the scope, severity, and impact of the African swine flu (ASF) outbreak in China had been greatly misunderstood. ASF doesn’t affect humans but has a very high mortality rate in pigs and has no vaccine or cure. According to the FAO, China announced its first ASF outbreak on Aug. 3, 2018, and has since confirmed 118 outbreaks.[i]

To put the Chinese market in perspective, China is both the largest producer and consumer of pork in the world and has a hog herd conservatively estimated to be in excess of 430 million, almost three times the size of the next largest herd (in the European Union). Colleagues at S&P Global Platts have recounted that news reports from China suggest that only 20 of the 100 breeding herds in China are disease-free: the supply impact of ASF could be sizeable and long-lasting (sows have a gestation period of “three months, three weeks and three days” and pigs do not reach slaughter weight until they are at least six months old). The USDA’s attaché in Beijing has forecast Chinese pork production at 51.4 million metric ton this year, down 5% from 2018, with imports forecast to hit 2 million metric tons, up 33% year over year.[ii]

The spread of ASF risks creating a big hole in global pork supply, and the U.S. is likely best suited to fill this hole, as U.S. supplies are expected to increase, while supplies in other markets are steady or even declining. However, it is worth noting that at this time, U.S. pork producers continue to contend with a retaliatory 50% tariff in China (on top of the regular tariffs faced by all other importing countries). The tariff in China continues to make products from other countries more competitive versus the U.S., at least in the short term. Filling the disease-induced supply hole will not be straightforward.

The broader implications of ASF and higher pork prices, particularly in China, are noteworthy. Pork is believed to be the single largest item in the Chinese CPI basket (official components and weights are not disclosed), and while domestic Chinese pork prices are notoriously volatile, policy makers are undoubtedly already worried about more than just the rising cost of their red-fried pork lunch.

There have been no reported outbreaks of ASF in commercial hog herds in the U.S. or Western Europe, but the potential impact of an outbreak on lean hog prices in either region could prove to be momentous.