Despite both indices representing the U.S. small-cap market, the S&P SmallCap 600® has outperformed the Russell 2000 Index in 16 out of 24 calendar years, with an annualized excess return of 1.81%.[1] Prior research by S&P Dow Jones Indices[2] found that inherent differences in index construction drove the historical return differential. Notably, the profitability inclusion requirement for the S&P SmallCap 600 explains a substantial amount of the difference. Based on the conclusions found in the paper, we investigated whether similar findings exist in the international small-cap space.

In order to determine if differences in geographic regions or economic status lead to return differences, we tested four different regions including Global, Global Ex-U.S., Developed Ex-U.S., and Emerging Markets.

On a monthly basis, we ranked companies in each universe and grouped them into quintiles, with the most profitable (highest) companies placed into the Quintile 1 and least profitable (lowest) companies placed into Quintile 5. For EPS, we placed companies in only two groups, with Group 1 representing profitable companies and Group 2 representing negative earnings companies. We equally weighted each group to avoid size bias, with returns calculated in local currency to avoid any currency effects. Exhibit 1 shows the average of the forward one-month returns for each group within each metric, beginning in 1999. 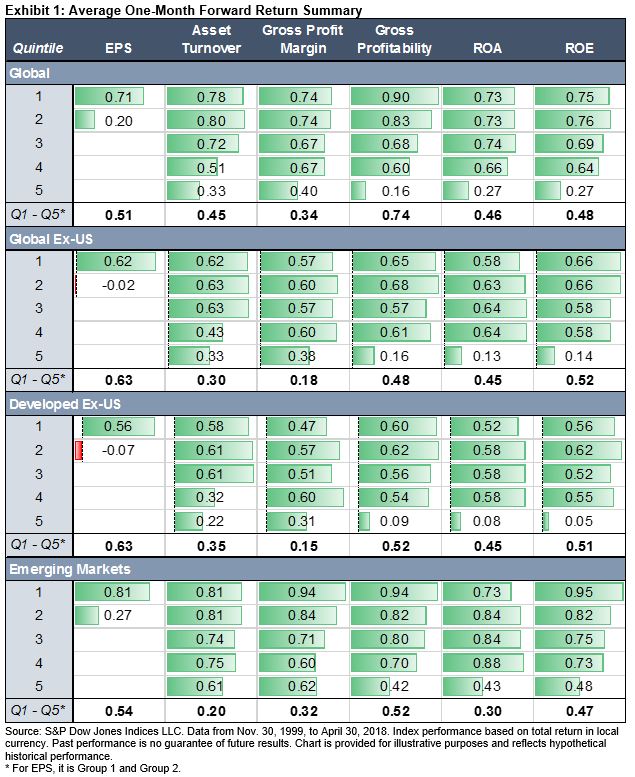 Exhibit 1 shows that the higher-ranked groups generally delivered higher future returns relative to the lower-ranked groups across all four universes and all six metrics. In addition, the return differential between Quintile 1 and Quintile 5 (or Group 1 minus Group 2 for EPS) is shown at the bottom of each universe. Based on the results, we concluded that, irrespective of the metric used to measure profitability, more profitable companies on average outperformed less profitable ones.

To determine if the excess returns between the Quintile 1 and Quintile 5 were statistically significant, and if there was any time variation (especially over longer periods), Exhibit 2 shows the information coefficient (IC) and t-statistic for 1-, 3-, 6-, and 12-month periods for the Global Ex-U.S. universe.

The positive ICs indicated the potential predictive power of profitability metrics on subsequent excess returns. Additionally, the t-statistics showed statistical significance for the majority of the figures. The results give credence to the notion that having a profitability requirement—even something as simple as screening out unprofitable companies using EPS—could potentially have a positive effect on returns for an international small-cap benchmark.

[3]   For real estate investment trusts (REITs), funds from operations were used in place of net income when available.