In August, the Dow Jones Commodity Index Total Return gained 0.7%, reducing its year-to-date loss to -1.4%, and the S&P GSCI Total Return lost 0.8%, increasing its year-to-date loss to -6.9%.  Industrial metals and precious metals were the only positive sectors, up 8.6% and 4.0%, respectively, while agriculture was the worst performing sector, losing 7.4%, posting its worst month since July 2015.  Wheat was the worst performing commodity, losing 13.6% from record supplies, while Chinese demand and the falling US dollar helped nickel gain 15.4%, the most of any commodity in August for its best month since Sep 2012.  In addition to nickel, 12 other commodities gained including all the metals and 5 of 6 energy commodities.   Brent crude’s excess return was positive in August for the first time since June 2014, showing the move from contango to backwardation as inventories draw down; WTI Crude’s roll was still negative but only by 0.3%, the least since Dec. 2014.  It is possible the refinery disruptions and trade issues from Hurricane Harvey contributed to the slower inventory draw of the domestic oil in August. 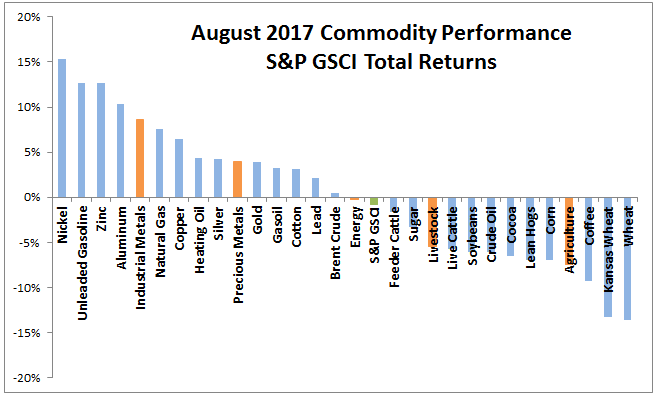 August 2017 was the first August on record that all the metals gained together (since 1995 – the earliest year all seven metals were included in the index,) and it was the first month every metal gained together since Sep. 2016. As a result, the S&P GSCI All Metals Total Return gained 7.3% in August, posting its best August ever since 1995.  Now the all metals index is up 19% year-to-date, and is on pace to have its best year since 2009, and its third best year on record. 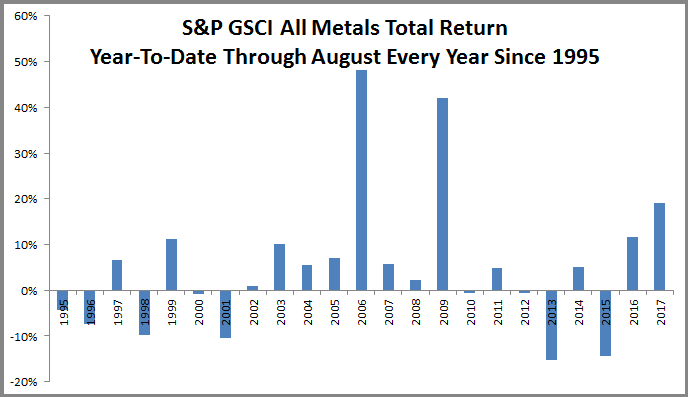 Many of the metals hit multi-year highs in August, and given the cyclical nature and economic sensitivity of industrial metals, they are interesting to examine further.  Below is a table of recent high dates and when they are the highest since.  Note the S&P GSCI Industrial Metals spot index is at its highest since Sep. 8, 2014.  Zinc hit its highest since 2007, while aluminum and copper are also at notable highs since 2013 and 2014, respectively.

The main reason these metals are moving together and are hitting new highs are from the falling U.S. dollar, Chinese demand growth and supply disruptions.

Since commodities are priced in U.S. dollars and industrial metals is one of the most economically sensitive sectors, it moves oppositely from the falling dollar, rising on average 2.3% for every 1% the dollar drops.  The dollar fell 9.3% year-to-date through August, so if the sector is moving as it has historically, its sensitivity to the falling dollar accounts for most of 2017’s gain.   Lead and copper are most sensitive to the dollar’s drop, rising on average 6.2%, and 3.5%, respectively, for every 1% the dollar falls. 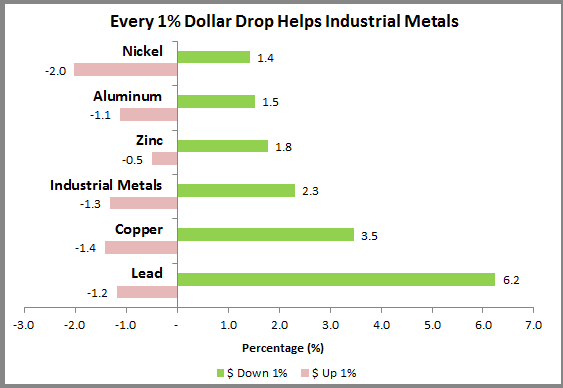 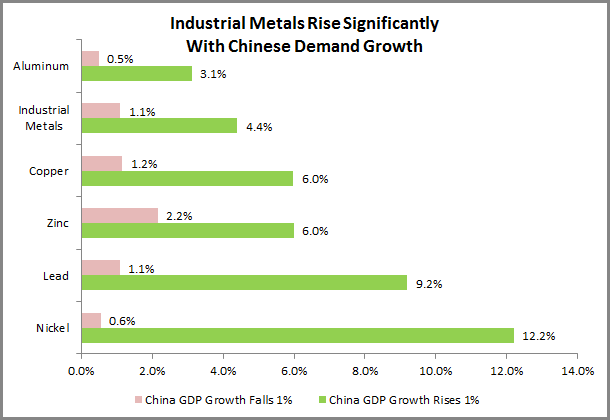 It will be interesting to watch the metals in September, but energy is at an interesting point from Hurricane Harvey and the upcoming OPEC meeting.  It is possible the policy may be influenced by the hurricane disruption, and that while U.S. inventories may remain high, the domestic transportation issues may help reduce the Brent crude inventories, enabling OPEC’s decisions to be temporarily more influential.