Now that negotiators have reached a deal aimed at reining in Iran’s nuclear program, Iran may get relief from some sanctions that may allow it to raise oil output. Though it could take time for supply to come onto the market, it depends on how long it takes for the International Atomic Energy Agency (IAEA) to verify all necessary nuclear-related actions have been met. Also, while oil in floating storage could come to market quickly (roughly 180 kb/d for 6 months according to IEA) and oil from already developed fields might be easier to deliver, underinvestment in production capacity and further negotiations of foreign investment from global oil companies may delay additional supply for significant time. It is extremely difficult to estimate future Iranian output not only from their own variables but based on how other suppliers will react to the news to maintain their market share ahead of Iran’s return.

The magnitude and direction of oil after Iranian supply comes to market is unknown. When less is known, volatility generally picks up as has happened in past oil crises. Also historically, open interest has had to crash before oil stabilized. Not only may OPEC’s last decision to continue production backfire from fund managers cutting their bets, but recent trade data from the Commodity Futures Trading Commission (CFTC) shows speculators have made their sharpest crude selloff in more than two and a half years. This is a critical point because the open interest is now at its lowest monthly peak in 2015. Also, the open interest has historically dropped about 1/3 before volatility normalized and now the numbers are showing the drop from roughly 500,000 to 300,000. This may be an inflection point indicating market rebalancing may be in its early stages. 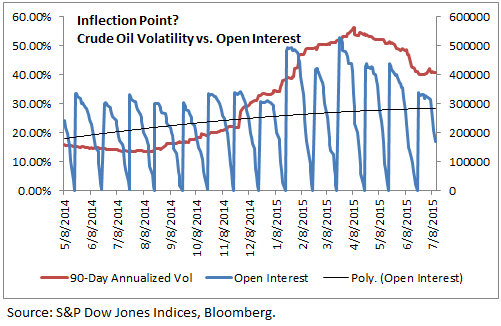 Although the open interest may be collapsing now to initiate the start of the bottoming process, there is trouble for Iran. The timing is terrible because oil has continued to be supplied in excess (as shown below by the negative roll yields from contango) since July 2014. As they re-enter the market, it may cause more downward pressure on oil prices, limiting the upside on their revenue. 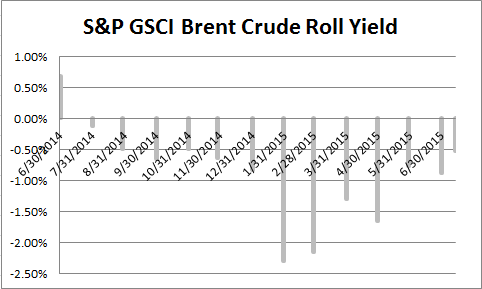 A consequence of Iran’s lower potential revenue is that it may hinder its ability to import healthy food to feed its population. Since its climate is not ideal for production, and is warming, Iran is food insecure and needs to rely heavily on imports. Iran imported $214 million worth of wheat in 2013 with other major imports including corn, soybeans and meat but malnutrition and obesity has risen as imports of cheaper sugar (DJCI Sugar lost 14.1% YTD as of July 13, 2015) have replaced many fruits and vegetables.

The concurrent glut of oil as Iran re-enters the market with the agricultural and livestock term structures that are now showing shortages can work against the budget both ways. This is particularly bad timing as contango (shown as negative) is now flipping towards backwardation (shown as positive) in these commodities – with the exception of soybeans:

Even worse for Iran is that importing food may be more expensive than ever due to the highly predicted El Niño. Agricultural prices have been increasing at an accelerated pace with each El Niño since 1982 by roughly 2.6% with large possible spikes following the heat waves.