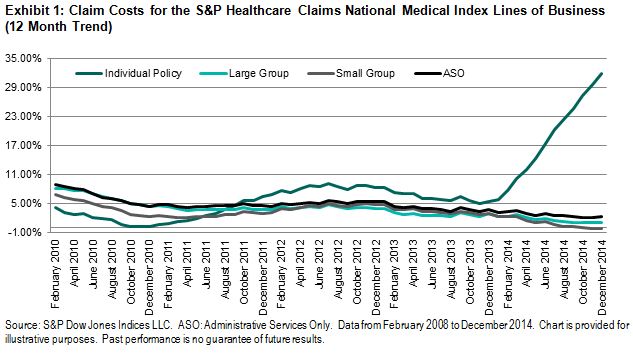 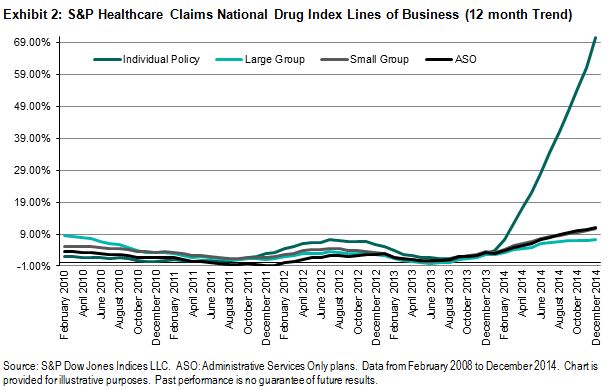 Factor investing is a well-documented method of generating excess returns, but some of the practical aspects of it are often overlooked in academic research, which tends to focus on “pure” premiums. Investors wanting to access these factors – size, value, volatility, momentum, etc. – are presented with a number of investment alternatives that aim to harvest the factor premium in different ways, and deciding which to utilize can be difficult. 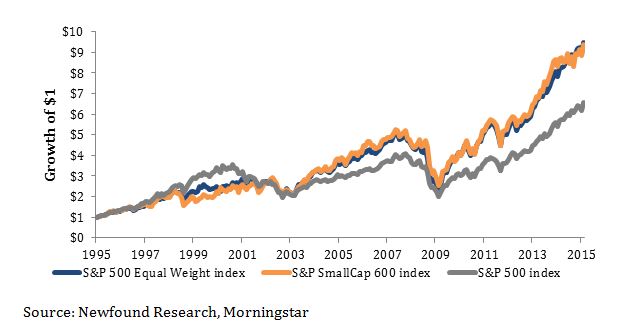 Performance statistics of the three indices over the period from January 1995 to February 2015 are shown below.

From this we can see that the equal weight version of the S&P 500 behaved a lot like the S&P SmallCap 600 with slightly better risk-adjusted returns. 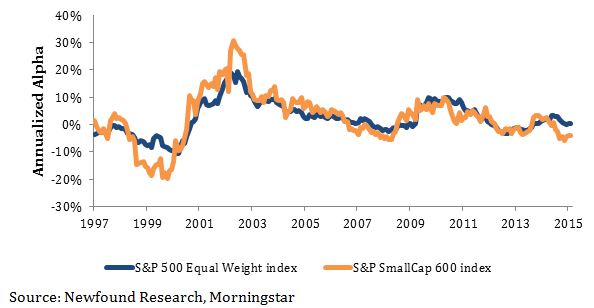 While this analysis does not guarantee that these out/under-performance trends have been directly attributable to the “size” factor in both indices, it does hint that there is at least some overlap in risk factors underpinning the two.

One important consideration when dealing with factors is how they will be used within a strategy. Within our U.S. Factor Defensive Equity strategy, we consider five factors: momentum, value, dividend growth, low volatility and size. These are weighted in proportion to their inverse volatilities. Therefore, we care more about the risk-adjusted return of the factor rather than simply the factor premium. Because the risk-adjusted return of the S&P SmallCap 600 index is right in line with the S&P 500 index, accessing size in this manner would not have benefited the strategy; there was not really any risk-premium.

This is just a specific example of a well-documented phenomenon.

The size premium is arguably one of the weakest of the factor premiums, especially in recent history. In their paper “Quality Minus Junk”, Assness, Frazzini, and Pedersen of AQR examined different market cap stocks sorted based on their quality and found that the size premium is most pronounced in high quality stocks. Many small-cap indices are skewed toward lower quality stocks, and while the S&P SmallCap 600 index screens companies for profitability, we would expect a higher proportion of large-cap stocks to be classified as “quality stocks”, in general.

We chose the S&P 500 Equal Weight index ETF as our size factor not because it is the purest exposure to the size premium, but because its methodology complements our other factor exposures. If we had chosen the S&P SmallCap 600 or any other of a number of market-cap weighted small-cap indices, we would likely have less exposure to the beneficial quality factor.  Equally weighting the index also pairs with our value factor by avoiding many of the glamour stocks, and rebalancing back to equal weight captures benefits of mean reversion.

Ultimately, having a pure factor exposure may be ideal in an academic setting with a 70+ year investment horizon, but on the practical level where we operate, the best outcome is likely realized by utilizing more robust indices and combining them in an intelligent way.