Through some simplifying assumptions, modern portfolio theory equates risk with volatility. In many cases, it is a “good enough” approximation: higher volatility indicates a greater probability of larger realized losses. But it also indicates a greater probability of larger realized gains. Most investors, however, are risk averse, meaning they are willing to give up some of their potential return to protect against potential losses (it’s why we diversify in the first place).

In and of itself, price variability is not the manifestation of riskiness, but rather a signal of uncertainty. Volatility is an indication that the market is having difficulty reaching a consensus on a forecast of future events, their probabilities, and their impacts.

While volatility can often serve as a proxy for risk, it does not necessarily capture all risks. In buyouts, the target’s stock price will jump towards the offer price and volatility will frequently dry up. The uncertainty of the deal is not measured in the volatility of the stock price, but rather in the discount of price relative to the offer. Considerable jump risk still exists; the lack of volatility is just an indication that the market agrees on the probability of the buyout occurring. So low volatility may not imply low risk.

Higher volatility does not necessarily imply higher risk, either. Consider a highly innovative company, making progress in leaps and bounds, versus a staunch, entrenched business with incremental growth. Certainly the first will be more volatile, as the latter is more predictable. But which do we think is more resilient in the face of sweeping industry change?

The appropriateness of volatility as a proxy comes down to how we define risk. In Rethinking Risk[1], Javier Estrada states,

In stark contrast to this study, a recently released white paper from UBS[2] shows that millennials have, on average, only 28% of their portfolio allocated to stocks. This risk-averse position may be a structural shift in behavior due to long lasting impacts of prior recessions – and may represent a real risk in long-term wealth creation for this generation.

How to appropriately measure risk will depend on the definition of risk, which will in turn depend on the context and investor’s objective. As more “risk managed” strategies make their way to market, investors should ask, “which risk?” and quickly follow with, “and how is it measured?”

Risk is a complex topic. In an upcoming panel discussion (S&P Dow Jones Indices Financial Advisor Forum in New York City tomorrow), we’ll be looking to take a deep dive on the topic, hopefully starting with the deceptively simple “what is risk?” and moving on to more complex topics, including ways in which we can measure and manage it.

The S&P China Bond Index is targeted to provide global investors an independent, transparent and broad-based benchmark. A study of the index returns revealed two interesting facts on the Chinese bond market volatility.

1)      While the volatilities of most Asian bonds retreated in the past year, the Chinese bonds have actually become more volatile. The historical data of the S&P China Bond Index showed that its one-year volatility stood at 3.45%, compared with its five-year volatility of 2.26%, please see Exhibit 1 below. However, China is not alone; Indonesia and Philippines also witnessed a rise in the volatility in the same period.

This heightening of volatility in Chinese bond market would be a response to the rapid growth and regulatory development, as well as the opening up of the onshore bond market. Notably, the expansion of the Renminbi Qualified Foreign Institutional Investor (RQFII) program offers global investors easier access to the Chinese onshore bond market.

Despite the recent increase, the volatility of Chinese bonds remained comfortably low and below the average volatility of Asian bonds represented by the S&P Pan Asia Bond Index.

Up until September 18, yields on the S&P/BGCantor Current 10 Year U.S. Treasury Bond Index crept high enough to ensure a loss of -1.21% for September.  Since then, rates have come down 18 basis points to Friday’s close of the index at 2.44%.  Currently the 10-year is trading another 2 basis points tighter at a 2.42%.

Month-to-date the S&P U.S. Issued High Yield Corporate Bond Index is returning 0.51% and on the year it has returned 4.06% year-to-date.  A more positive start to the month than the -2.05% the index returned for September.  Like July’s decline, a heightened concern for a rise and rates and a quick withdrawal of funds from the sector led to dramatic loss for the month.  The question for October will be if interest rate remain low, will the high yield sector bounce back from here like it did in August? 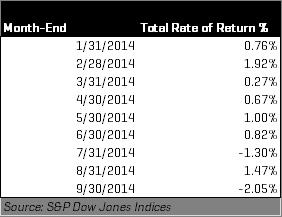 An interesting chart that might represent how U.S. rates could remain low on the back of the European economy for a while shows the yield difference between the S&P Eurozone Sovereign Bond 7-10 Years Index and the S&P/BGCantor 7-10 Year US Treasury Bond Index. 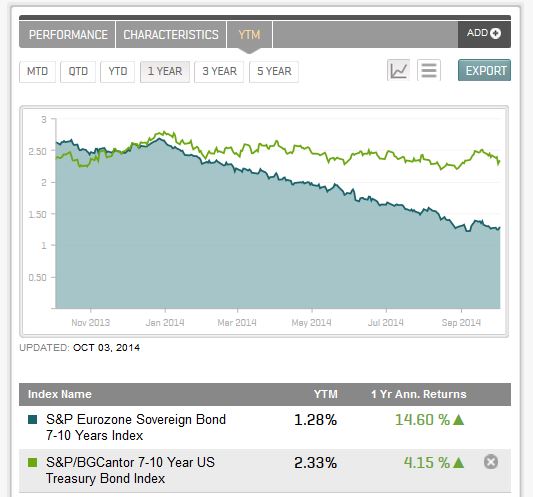 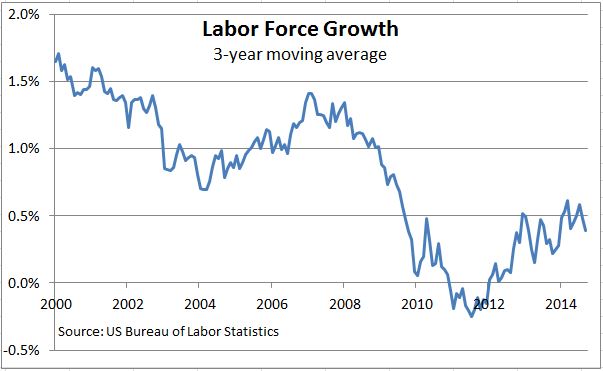 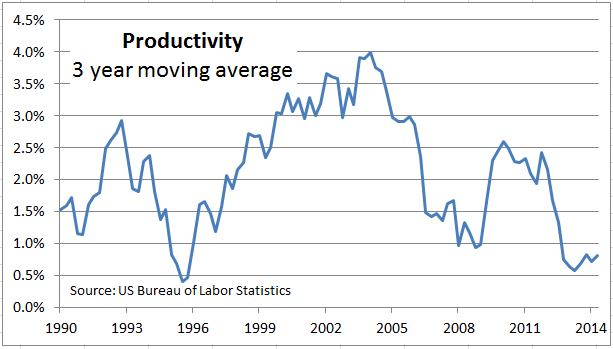 The S&P GSCI 2015 Rebalance Preview marks a historic shift in the benchmark renowned for its world production weight.  According to this announcement of pro-forma weights, Brent crude oil is targeted take over WTI‘s status as the leading oil benchmark and the most heavily weighted commodity in the S&P GSCI. This is the first time since 1997 that a commodity other than WTI crude oil is set to be the most heavily weighted. (Natural gas was greater at times from 1994-7.)

The dynamics of the crude market have changed, especially since 2010, as unconventional crude and liquids have seen an explosive growth in production from shale oil fields in Texas, North Dakota and also from increased Canadian imports. This increased supply of crude oil resulted in bottlenecks and oversupply at the Cushing pipeline nexus, which put pricing pressure on WTI. Now, pipeline capacity has been increased and transportation improved to reduce the Brent premium.  The chart below shows the premium collapse in index terms that in dollar terms translates from a high of about $20 to near parity today.

While in the Americas, WTI crude remains the benchmark for pricing, a number of U.S. based hedgers use Brent due to its global fundamental relevance, and also since it is internationally arbitraged to U.S. refined oil product exports and oil imports. Since U.S. refined product exports and oil imports are not constrained by pipeline infrastructure, or restrictions on exporting U.S. crude, Brent futures are used as effective hedging tools. Below is a map that shows the widespread influence of Brent oil in benchmark pricing.

Might this mean a greater opportunity for producers to hedge? Recently, the Brent curve has collapsed from bearish secular trends for the Atlantic Basin and Asia imports from West Africa. However, this puts pressure on Middle East suppliers to cut back. So there are both bull and bear pressures on Brent, making it likely range-bound – but conceivably at a lower range. More disruptions are possible and only a major one, probably from the Middle East might offset more production, especially from Saudi Arabia. Though influences from new refinery capacity in the Middle East may substitute crude supplies with products. On the upside in the short term, production growth in Lybia and Iraq is unlikely to grow fast enough to surpass disruptions from Nigeria and Venezeula.