At their core, TDFs are professionally managed asset allocation policies. Questions therefore naturally arise around how (or even whether) they should be benchmarked with market indices. The investor(s) on whose behalf a particular policy is undertaken may have highly subjective criteria for success that have very little to do with outperforming market benchmarks. For example, if I have a specific goal toward which I earmark some assets, in any given year I probably care more about making progress toward my goal than I do about outperforming the stock market.

However, we should not be led astray by false choices. We do not have to choose between market-based or goals-based benchmarks – we need to intelligently use both. If my large-cap fund manager consistently underperforms the S&P 500, there may be a very good reason for it. Maybe she is taking a lot less risk. Or maybe not. In either case, I ought to know about it, and having the S&P 500 as a proxy helps me to understand the opportunity, and risks, available in large-cap stocks. The market benchmark helps me make an informed decision about who should manage my hard-earned capital, as well as the overall portion of my resources that I should devote to the large-cap category.

Many stakeholders get hung up on how to benchmark TDFs because they include multiple asset classes and provide more holistic investment programs than single-asset class funds. Investors should be aware that benchmarking with market-based proxies enables better informed choices. For example, some TDF managers generally underperform market-based benchmarks because their policy is to invest more in fixed income than competitors. There is nothing wrong with that and many investors seek such exposure. To understand why managers perform in certain ways, referencing market-based benchmarks of the TDF universe provides valuable information. Benchmarking custom TD strategies is no different. Whether a plan selects a custom solution to create a more diverse asset allocation, have more control over underlying managers, or build a glide path that addresses unique plan demographics, the only way to fully gauge the impact of the decision to go custom is to compare results, and asset allocation, with a market-based proxy. In some instances, it may be eye opening for retirement plan sponsors to see that their custom glide path is not very different from the market consensus. In others, comparing the custom glide path with the market consensus may validate the decision to go custom. Either way, it’s better to be mindful of overall opportunities and risks within the TDF category, and to be conscious about deviating from the consensus where appropriate, via reference to a market benchmark.

If you are interested in a comparison of TDF performance with a market-based consensus glide path, as represented by the S&P Target Date Index family, please see our latest Target Date Scorecard.

As investors, we necessarily rely on history.  How we analyse that history is particular to each investor – some will look for technical patterns, some at fundamental data, still others will build quantitative models.  But all of us need data, and history is our only source.

We may have to rely on history; we don’t have to fall prey to what the behavioural economists would call “recency bias.”  Indeed, taking a longer-term view can provide invaluable perspective.  Two popular views of the current environment provide a specific example:

A running thread in both theories is the “risk on/risk off” dynamic.  We are now either in utter turmoil or dulcet calm, each exaggerated by the rapid and capricious response of a highly mobile and sophisticated investment community.

An examination of recent history would appear to support these claims.  It certainly looks like a new, more volatile dynamic since the beginning of the financial crisis.  And as we all know, volatility has registered remarkably low levels more recently.  Are we set to continue in a bar-belled digital age of all volatility, or none? 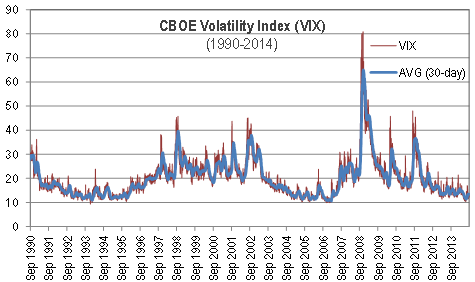 Now, there is a good reason why the chart above begins in 1990.  The VIX data begin then; we don’t know what the VIX would have been during the “black Monday” crash of 1987 (although there are clues, they suggest the answer is higher than at any point subsequently).  Nor do we have any idea of the appropriate level of implied volatility during the “Knickerbocker Crisis” of 1907.

However, what we do have – in the Dow Jones Industrial Average – is a market bellwether with a remarkably comprehensive history.  Here is 118 years of realized monthly volatility in the DJIA: 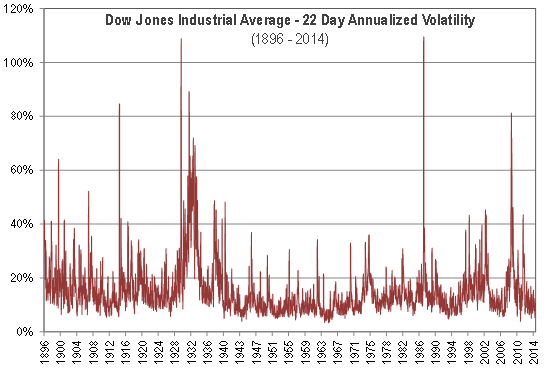 Clearly, long periods of low volatility are not unusual.  Whatever else may have been occurring in the 1960’s – and despite a war and an assassinated president – there wasn’t much turmoil in U.S. blue chips.  Extended periods of both high and low volatility have been a part of the market since it was invented. 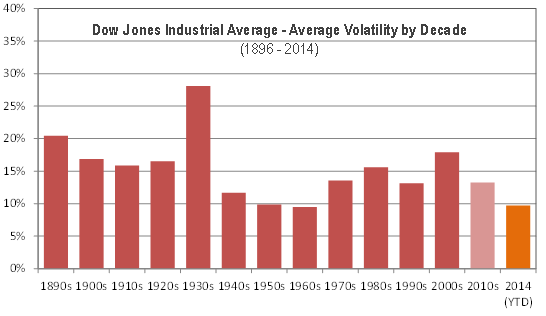 The phrase “it’s different this time”, uttered by a financial professional, typically provides grounds for mockery.  Sometimes it’s true.  But if you don’t take the long view, it’s hard to see whether this time is actually different at all.