Getting there - China Municipal Bond Market

All things shall pass - a factoid

Getting there - China Municipal Bond Market

China has recently announced some potential changes in its municipal bond market, which will allow the local governments to sell bond on their own credits, as opposed to the majority of local government bonds that are currently issued by the Ministry of Finance. The coverage is targeted to expand to Beijing, Jiangxi, Ningxie and Qingdao, in addition to the six local governments that were approved in last three years. As highlighted by the author in the article, China Needs Municipal Bond Rethink, raising transparency is definitely the objective to this disclosure-based system. The author also expected more participation from the retail investors in the municipal bond market following the change.

This suggested development in the municipal bond market is perceived as a positive sign, which encourages further growth in the China onshore bond market. It would also help the local governments to meet the financing needs while also to strengthen their debt profile. Echoing an important point raised by the NPC Law Committee member, the local governments’ debt raising should be further regulated so that the process can become more legalized and transparent. 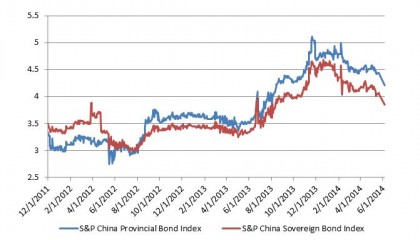 Source: S&P Dow Jones Indices. Data as of Jun 6, 2014. Charts are provided for illustrative purposes. This chart may reflect hypothetical historical performance. Please see the Performance Disclosures at the end of this document for more information regarding the inherent limitations associated with back-tested performance. Past performance is no guarantee of future results

Recently, we have seen quite a bit of discussion on the S&P VEQTOR Indices. Most of the discussion focuses on its use of VIX futures, complicated allocation process, short back test history, and performance drag. This post is meant to to clarify a couple of the unique characteristics of this index.

Initially it is worth noting that the purpose of this index is to simulate an allocation algorithm that has low correlation with the equity market and provides efficient hedge in black swan events. This is main reason why for a majority of the time, VEQTOR allocates 10% to VIX and generally has a performance drag. The index is not supposed to be an alternative to the S&P 500. I think of it as similar to why I pay for health insurance and adjust my insurance plan every year according to my expectation of next year’s health care expense. As a young professional, more often than not I would have saved money if I simply went uninsured. However, this extra expenditure makes me sleep better. And that’s exactly why some market participants choose to allocate a portion of their assets to VEQTOR, despite its performance drag.

While it is true that VIX spot and futures are related, it is also true that they are quite different. But VIX future’s hedging property is undeniable, especially in black swan events. In a strong bear market, the VIX futures curve tends to flip from contango to backwardation, and the roll process tend to generate extra yield.  Refer to the following two papers for a discussion of VIX spot and futures: “Identifying the Differences Between VIX Spot and Futures” and “Access to Volatility Via Listed Futures.”

VEQTOR acknowledges the roll cost of the VIX futures and attempts to dynamically adjust its allocation between VIX and equity by monitoring market signals. Complicated at the first glace, its allocation process actually only uses two quantitative signals: realized volatility and implied volatility trend. They essentially tell you what has happened and what could happen in the market. The cutoff points (10%, 20%, 35% and 45%) of the realized volatility are driven by the long term performance of the S&P 500. Since the index is designed to address equity market tail risk, we picked the numbers close to the 20th-, 80th-, 95th– and 98th-percentile of monthly realized volatility. To establish the trend of implied volatility, we compared VIX weekly average with its monthly average. A week is roughly 5 trading days (Happy Memorial Day! We work one day less this week!), and a month is roughly 20 trading days. And VEQTOR monitors them for 2 weeks to determine whether the trend is substantial. Why 5? Why 20, not 21 or 22? Why 10? Honestly, a slight change in those numbers (give or take one or two days) would not change the essence of the VEQTOR framework or significantly impact its allocation results.

If you are interested in VEQTOR allocation process, please refer to its methodology and our white paper, “Dynamically Hedging Equity Market Tail Risk Using VEQTOR” from May 2014.

All things shall pass - a factoid

The Dow dropped 416 points. Freddie Mac announced it would no longer buy subprime loans that have a “high likelihood” of borrowers not meeting monthly payments.

Until about an hour ago.

Recently at a panel discussion that I participated, one topic we talked about was if the bond price volatility in Asia is an obstacle to the investors. I believe it is a common misconception in the market.

A volatility analysis was run on the local currency denominated bonds of the 10 countries that tracked by the S&P Pan Asia Bond Index, which are China, Hong Kong, India, Indonesia, Korea, Singapore, Malaysia, Philippines, Taiwan and Thailand. Excluding the relatively high volatilities in Indonesia and Philippines, most countries have an annualized volatility around the 2% level. Interesting to note, while Indonesia and Philippines bond markets are more volatile, they also have the strongest growth in size among the 10 countries, as they expanded more than fourfold and threefold since December 2006.

We also compared the five-year annualized volatilities of the S&P Pan Asia Bond Index (denominated in USD) with other major bond markets, such as the U.S. treasury, U.S. investment grade corporate, U.S. high yield corporate, Eurozone sovereign and Australian bond markets, see the exhibit below. It is observed that the bond price volatility in Asia (even accounting for foreign currency fluctuations) is not necessarily higher than the other major markets. In fact, the S&P Pan Asia Bond Index has been historically less volatile than the S&P U.S. Issued Investment Grade Bond Index for the periods of one-year, five-year and since December 2006.

The S&P Pan Asia Bond Index is designed to provide a broad and independent benchmark for the local-currency denominated bond markets. Country-level and sector-level indices are available.