The S&P SmallCap 600® celebrated its birthday last week, marking 27 years since its launch on Oct. 28, 1994. Designed to reflect the performance of small-cap U.S. equities, the index’s cumulative total returns have been affected by trends and narratives impacting the equities segment, historically.

For example, Exhibit 1 shows that the S&P 600™ was affected by the so-called COVID-19 correction in 2020 and the subsequent rebound. The strength of the index’s rebound since Q4 2020 meant that its 59.5% total return since its last birthday was its highest figure, ever—quite the birthday present! 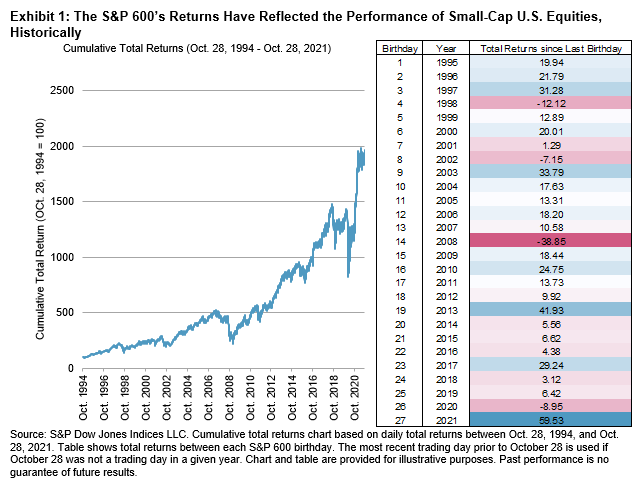 A key reason for the strength of the S&P 600’s rebound in the past 12 months is its greater sensitivity to U.S. macroeconomic variables, as many investors revised upwards their economic projections amid vaccine announcements and the subsequent rollout. As Exhibit 2 shows, smaller companies are typically more domestically focused in their revenue exposures, which helps to explain why the S&P 600’s returns have been more correlated to changes in U.S. GDP growth and consumption and investment, historically. 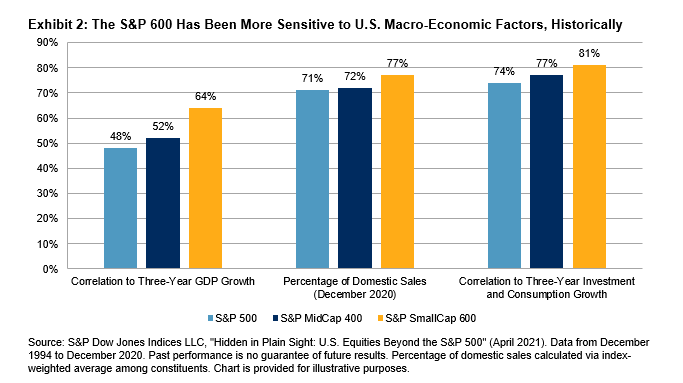 Some market participants might view small-caps as a relatively inefficient asset class more suited to the endeavors of active managers. However, data from our SPIVA® Scorecards suggests otherwise: most U.S. small-cap active managers underperformed the S&P 600 in 14 of the past 20 full calendar-year periods.

Our SPIVA U.S. Mid-Year 2021 Scorecard results also made for disappointing reading for those thinking that recent market movements would have offered a more favorable environment for active managers, as 78% of U.S. small-cap active funds underperformed the S&P 600 in the 12-month period ending June 30, 2021. The equivalent figure over the three-year horizon was 54.8% and underperformance increased to 66.7%, 83.5%, and 93.8% over the 5-, 10-, and 20-year horizons, respectively. 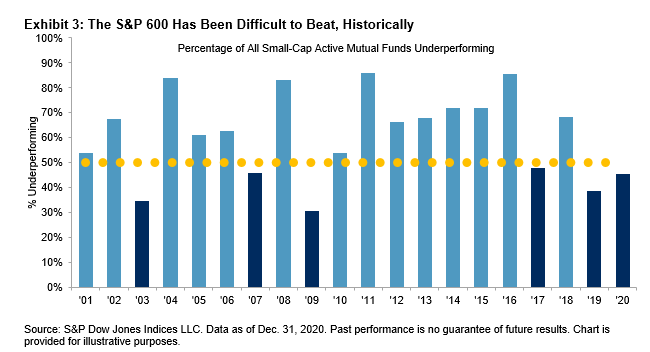 Additionally, the S&P 600 has typically been a harder benchmark to beat than the Russell 2000, another index designed to represent the performance of small-cap U.S. equities. As we have written about before, unlike the Russell 2000, the S&P 600 employs an earnings screen and the resulting quality exposure has contributed to its outperformance, historically. More recently, differences in sector weights and constituent composition helped to explain the S&P 600’s relative returns in 2020 and its sector-led bounce back so far in 2021. In short, index construction matters! 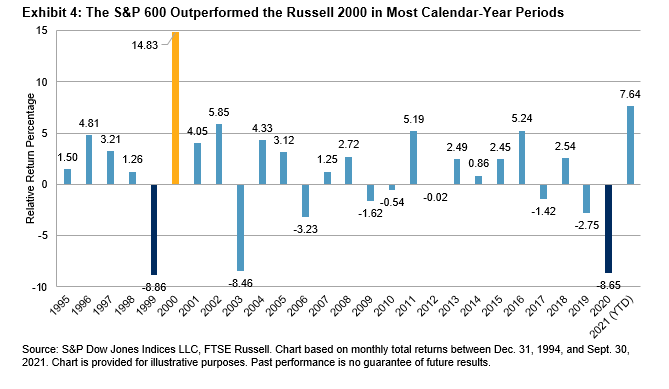 Finally, the breadth and depth of the U.S. equity market means that the S&P 600, its returns, and its characteristics may be relevant to investors around the world. As with portion sizes, what is smaller in the U.S. is larger elsewhere. For example, Exhibit 5 demonstrates that the float market capitalization of S&P 600 constituents is equivalent to that of several countries in the S&P Global BMI. Hence, having a view on U.S. small-cap equities may be as helpful for explaining global equity returns as understanding the trends and narratives affecting those countries. 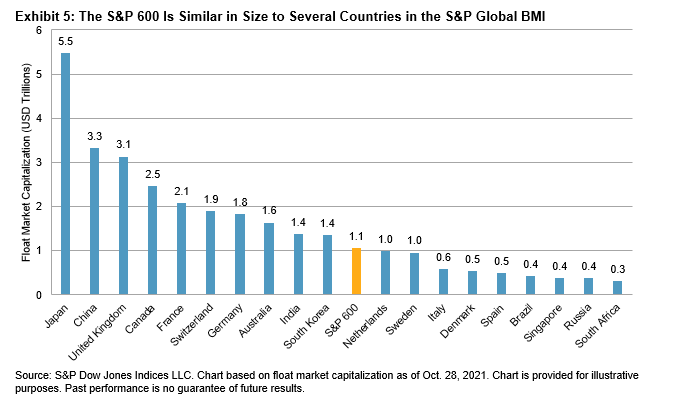 In 2020, pandemic-driven lockdowns in India caused gold demand to drop. So far in 2021, Indian demand for gold is 500 tons greater, even with two months left in the calendar year. China has been the primary destination for gold over the past few years and that continued this year, but a strong pickup in Indian demand coupled with lower growth in consumption from China is allowing India to gradually narrow the gap. According to the World Gold Council, jewelry demand rose 58% year-over-year in India in Q3 2021, compared with 32% growth in China over the same period. Similar year-over-year outperformance was seen in gold bar and coin investment growth from India versus China. Depending on demand in Q4 2021 with the Diwali festival, India could return to peak levels last seen in 2013. That year was the last time India was the number one destination for gold, beating out China. 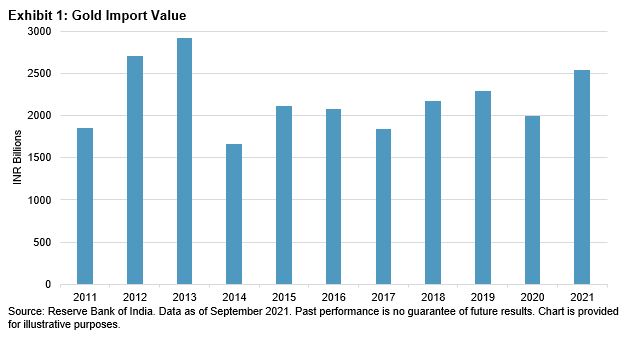 There are a few positive catalysts helping the second most populous country in Asia. The government lowered the import duty to 7.5% from the prior 12.5%, making it cheaper to buy in India this year. Previously, a relatively high duty compared with other major economies dampened demand somewhat, but the sheer size of gold jewelry demand in India seemed to always overcome this headwind. This is less of a headwind after the reduction.

Pent-up demand after a once-in-100-years pandemic played a role in the massive increase this year. Base effects distorted most economic data at some point, but the increase in demand was unexpected by most analysts. India was hit hard by COVID-19 but each time restrictions were lifted, imports picked up. Gold imports initially contracted sharply in May and June 2021, but surged from July through September from pent-up demand for weddings and improved business sentiment in the gems and jewelry industry, according to the Reserve Bank of India.

Switzerland is the world’s largest exporter of gold and the origin of half of India’s gold imports in a typical year. The percentage of India’s total gold imports coming from Switzerland has been on the rise over the past few years, as it is known for having some of the best gold refineries producing the finest quality gold.

With the Diwali season providing a strong backdrop for gold demand, the typically price-sensitive Indian buyers are seeing gold as more attractive at these lower levels compared with last year. During this festive time, gold may find its footing again as the market turns attention back to the precious metal.

The S&P GSCI, the broad commodities benchmark, rallied 5.8% in October. Performance was solid across sectors, with energy-related commodities continuing to outperform and grains and metals regaining some of their recent weakness. With two months of the year remaining, the S&P GSCI is up 46.3% YTD, the index’s best performance over the first 10 months of a calendar year in its 30-year history.

Natural gas prices in Europe and coal prices in China lost some of their luster in October, with countries intervening after record price spikes in September. The S&P GSCI Natural Gas fell 10.0%, as Russia came to the rescue promising more exports to Europe. The S&P GSCI Petroleum continued higher by 9.7%, almost matching the prior month’s strong performance. A perfect storm of catalysts from delayed production increases, strong global demand, and logistics issues were still very much in play in global energy markets.

Most commodities within the agriculture space rallied in October, with the S&P GSCI Agriculture ending the month 3.6% higher. The S&P GSCI Kansas Wheat jumped 7.4% over the month. Strong import demand, poor spring wheat harvests, and an export duty imposed by Russia have heightened expectations of relatively tight global wheat supplies this season. For the second consecutive month, S&P GSCI Cotton was the best performer in the agriculture complex, rallying 8.6%. The rally has been fuelled by optimist estimates of demand, as consumers emerge from COVID-19 restrictions, while the overall harvesting pace for the U.S. crop has been slowed by various forms of weather adversities and maturation rates.

The S&P GSCI Livestock fell 1.5% in October, with lean hog prices tumbling. Hog supplies in the U.S. continue to greatly outpace demand. U.S. pork exports to China have fallen for the last three months, while record pork prices in the domestic market are having a negative impact on per capita consumption.

Gold enjoyed a modest revival in October, with the S&P GSCI Gold gaining 1.5%. After lagging other inflation-sensitive assets for most of 2021, and with inflation showing few signs of abating, market participants may be reassessing their gold positions. On the flip side, while gold is considered an inflation hedge, reduced stimulus and interest rate hikes would likely push government bond yields and the U.S. dollar up, denting non-yielding gold’s appeal.

What are the high-level ESG exposures? The indices show improvements across a large range of climate and ESG factors, including physical risks, transition risks, and opportunities, alongside environmental, social, and governance exposure improvements. 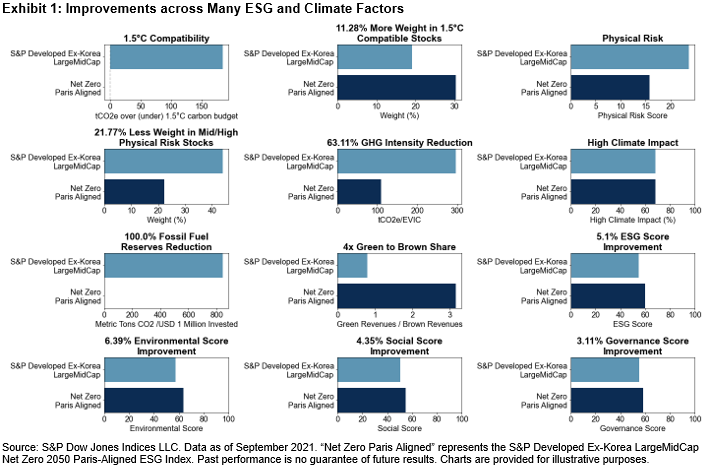 Which ESG factors are important in driving the weights of the index? First, approximately 23% of the weight from the investable universe is excluded and a further 16% active share (which measures the percentage of index weights that differ from the underlying index) is taken on from reweighting. 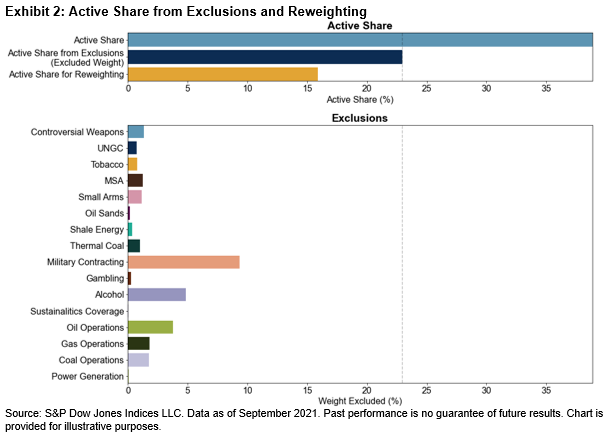 The active share from exclusions is easy to quantify—it is simply the excluded weight of the underlying index. The active share from reweighting is attributed to climate factors (see Exhibit 3), largely caused by the transition pathway (aligning with 1.5°C on a forward-looking basis), high impact revenues (to maintain neutrality, per the EU Benchmark Regulation), physical risk, and ESG scores. 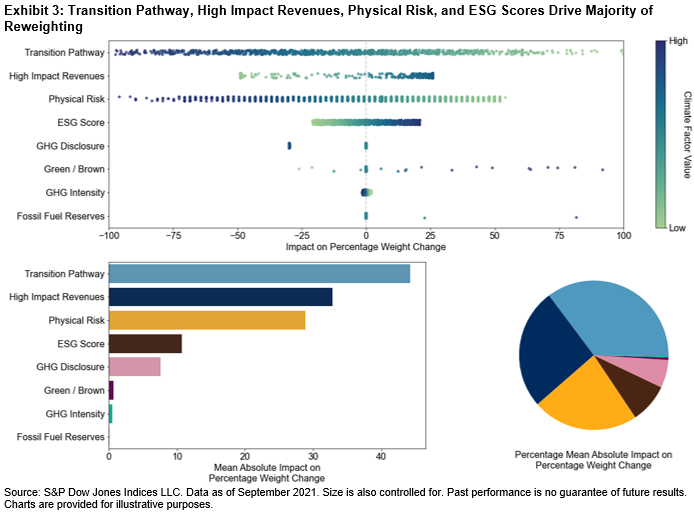 How has the index performed? We see an excess return from the S&P Paris-Aligned Index, with lower volatility and max drawdown, resulting in a higher risk-adjusted return. Of this excess return, around two-thirds can be explained by equity risk factors, leaving around one-third of the excess return as unexplained alpha (stock specific). 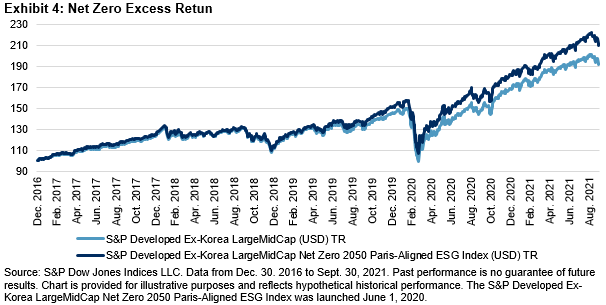 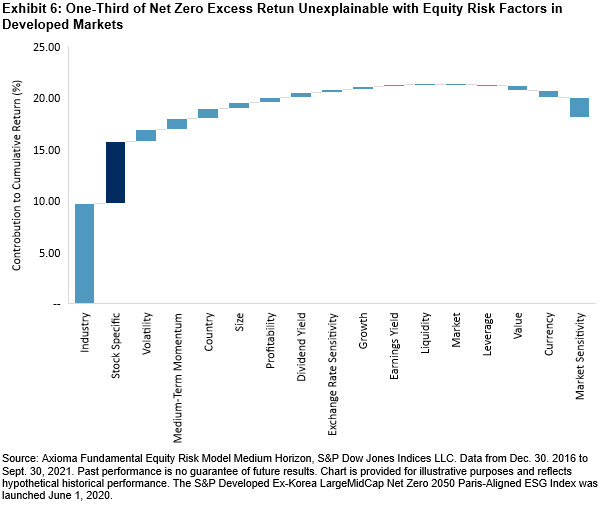 To learn more about the S&P PACT Indices, we have a short overview and longer paper to explain some technical details, both of which and much more can be found on our Net Zero investment theme page. 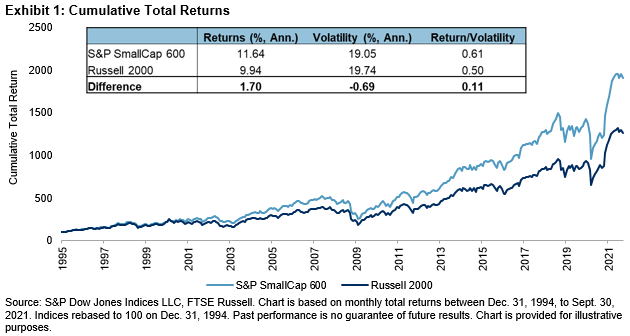 The S&P 600’s historical outperformance has been consistent over various rolling time periods, especially over longer horizons. Indeed, Exhibit 2 shows that the S&P 600 outperformed the Russell 2000 in 202 of the 310 (or 65%) rolling one-year periods between Dec. 31, 1994, and Sept. 30, 2021. The frequency of outperformance increased with the time horizons.

So, what has been behind this recent turnaround? 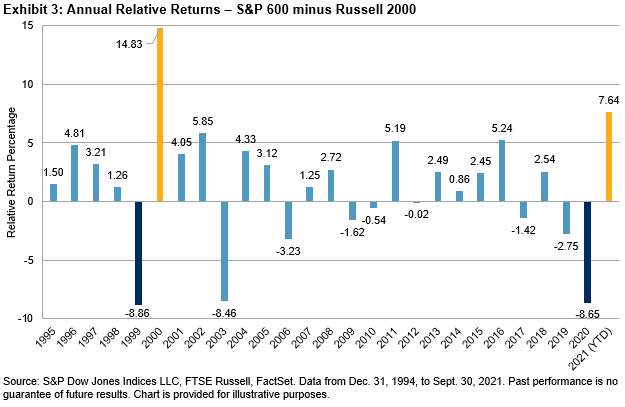 A large part of the relative performance in 2020 and 2021 can be explained by the exposure of each index to a single sector—Health Care. Exhibits 4 and 5 show a Brinson Attribution for 2020 and YTD 2021, using the S&P 600 as the portfolio and the Russell 2000 as the benchmark. Here we use the iShares Russell 2000 ETF as a proxy for the Russell 2000, so the returns do not tie out exactly to Exhibit 3.

In Exhibit 4, the Total Effect column on the far right shows that the S&P 600 underperformed the Russell 2000 by 8.59% in 2020. The rows in the table show the 11 GICS® sectors along with the two industry groups within the Health Care sector. The Contribution to Return columns indicates how much each sector or industry group contributed to the relative return for each index. 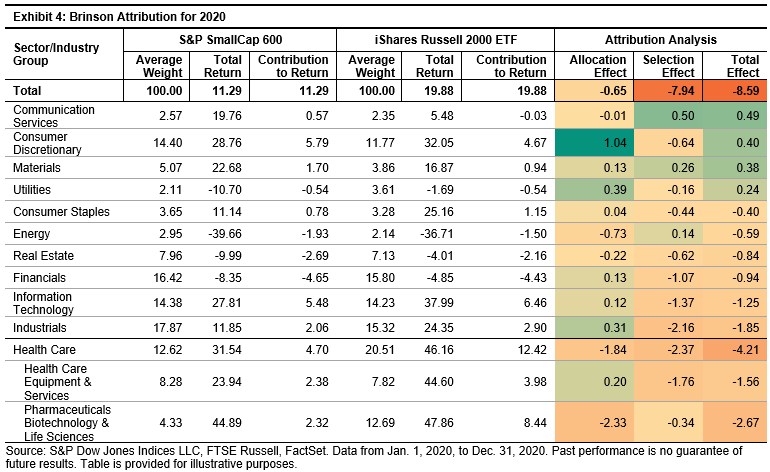 Turning to Exhibit 5, we can see that the story of 2020 has largely reversed in 2021. The S&P 600 has remained underweight in Health Care (-8.14%), but this year the sector has underperformed the broad small-cap market significantly. Year-to-date, the S&P 600 outperformed the Russell 2000 by 7.07%, indicated by the Total Effect column on the far right. The Health Care sector accounted for 3.30% (or 47%) of the outperformance. Looking at the industry groups within the Health Care sector, we can see that Pharmaceuticals, Biotechnology & Life Sciences has contributed most of the outperformance, at 2.90%. 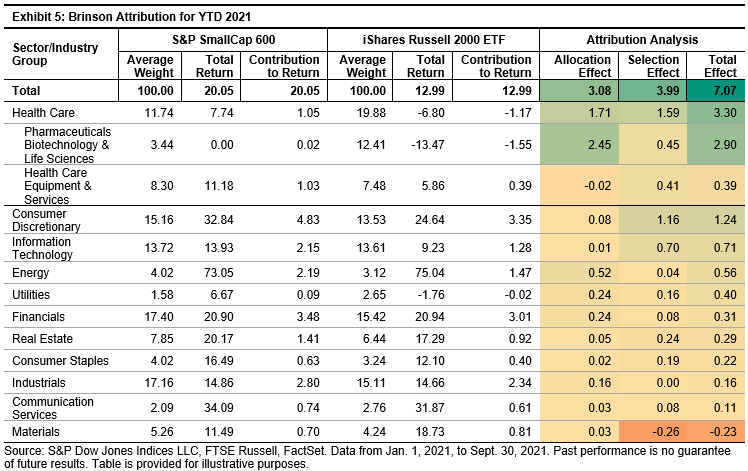 Since Dec. 31, 1994, the S&P 600 has outperformed the Russell 2000 by 1.70% annualized. This outperformance has been consistent through time, particularly when we look at longer time horizons. However, when we look at annual returns, we can see periods when the S&P 600 has underperformed. The two worst years of relative performance for the S&P 600 (1999 and 2020) have been followed by significant bounce backs the following year. Year-to-date in 2021, much of that bounce back can be attributed to the S&P 600 having less exposure to health care companies compared with the Russell 2000.