As a potential investor, would you be impressed by the pattern of fund returns summarized in Exhibit 1?  (I would be.) 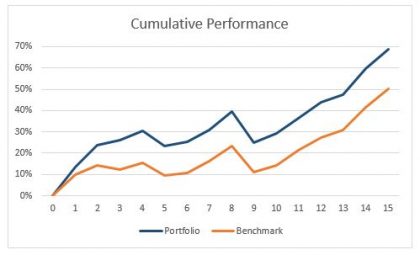 Over the course of 15 years, the portfolio in question notched a total return of 69%, versus only 50% for its benchmark.  The accumulation of added value seems reasonably steady, and the portfolio doesn’t appear to be substantially more volatile than the benchmark, an impression that’s confirmed by the annual data in Exhibit 2. 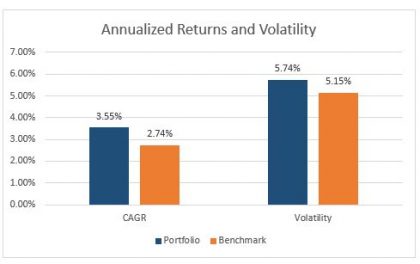 The portfolio generated 0.62 units of return for every unit of volatility, while the benchmark’s return/risk ratio was 0.53.  Not only did the portfolio outperform in absolute terms, in other words, it also outperformed after adjustment for risk.

One of your colleagues is as impressed as you are with value added shown by Exhibits 1 and 2.  He’s so impressed, in fact, that he prepares Exhibit 3, the better to admire the accumulation of alpha. 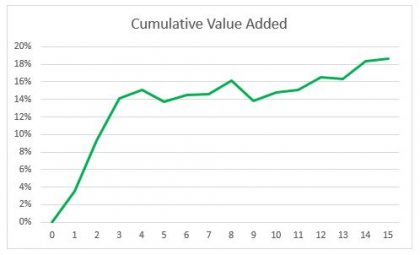 If we pull on this thread, the fabric begins to unravel.  The cumulative value added shown in Exhibit 3 – roughly 19% – is consistent with the total returns we observed in Exhibit 1.  But now it becomes clear that the majority of the value added came very early in our 15-year history.  What’s going on?  Exhibit 4 illuminates the issue by showing annual, rather than cumulative, value added. 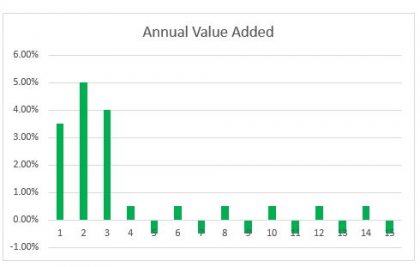 For the first three years, the portfolio handily outperformed its benchmark.  For the subsequent twelve years, its value added was exactly zero – positive 50 basis points one year and negative 50 basis points the next.  After year three, the portfolio and the benchmark rose by almost exactly the same amount.  Although no new value added was generated, the initial margin is algebraically certain to increase as long as the market goes up.

As with many things in performance accounting and fund marketing, data can be accurate and misleading at the same time.  Exhibit 1, though accurate, gives the impression that the portfolio’s managers have added value steadily for the last 15 years.  Exhibit 4 reveals that their value-adding days ended more than a decade ago.  As we’ve advised before, whenever you examine a performance history, disaggregate.  If the value added is real, it will show up in annual or quarterly numbers.  If it’s not real, it might still appear in cumulative returns.  Users of more granular data are less likely to be misled.