Comparison of Dividend-Focused Strategies in Brazil

A Way of Seeing

How Australian Dividend Investors Could Benefit from the Core-Satellite Approach

The EU Climate Transition and Paris-Aligned Benchmarks: A New Paradigm

Comparison of Dividend-Focused Strategies in Brazil

While dividend-focused strategies are popular across various regions, not all dividend strategies or dividend indices are constructed the same way or have the same objective.

The three strategies are high-yield oriented, which means that constituents’ weights are determined by their 12-month dividend yield, subject to concentration constrains. The main difference is in the eligibility criteria and the member selection, as described in Exhibit 1.

Different mechanics can lead to different risk/return profiles. Over the 5- and 10- year periods, the three strategies were shown to add value compared with their benchmark, and the dividend yield achieved was around double that of the S&P Brazil BMI (see Exhibit 2). 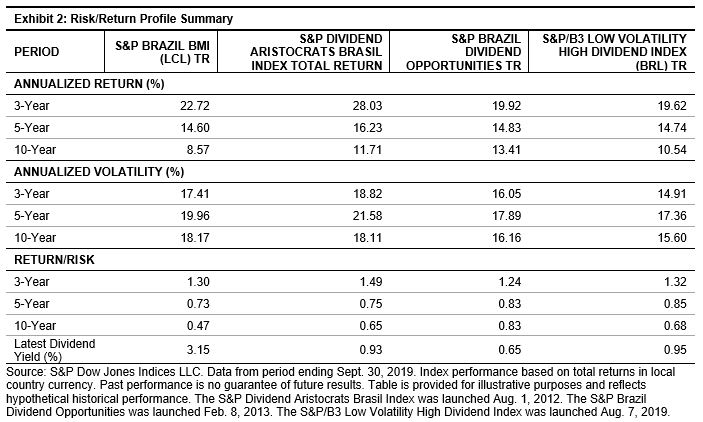 Differences in methodologies also result in varied sector composition. Compared with the S&P Brazil BMI, the dividend strategies had lower exposure to Consumer Staples and higher exposure to Utilities. In contrast with the S&P Dividend Aristocrats Brasil Index and S&P Brazil Dividend Opportunities, the S&P/B3 Low Volatility High Dividend Index had no exposure to Energy and Information Technology, which among dividend payers tend to be relatively more volatile. 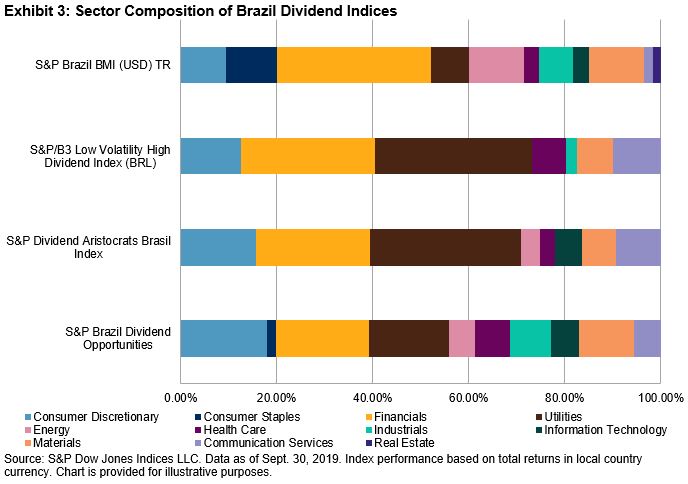 A Way of Seeing

A wise man told me years ago that sometimes the things we see are less important than our way of seeing.  As more formerly-active investors begin to use passive vehicles, it’s useful to consider if there’s a distinctly index-centric way of seeing, and what its elements might be.  I think that there are at least three such elements.

First, passive is the default position.  When considering a market, a segment, a factor — first ask how it can be accessed passively, or “indicized.”  Claims of value added by active stock selection should be viewed with extreme skepticism.  This is not an argument from convenience or doctrine, but rather a reflection of a powerful empirical truth: most active managers underperform most of the time.  Over intervals as short as five years, it’s not uncommon to find that more than 80% of active managers lag a benchmark that’s appropriate to their investment style.  This is not a statistical coincidence; it happens for good reasons and is therefore highly likely to persist for the foreseeable future.  Defaulting to passive simply recognizes this reality.

Second, think of an active portfolio as a collection of attributes, not a collection of stocks.  For any individual company, stock-specific matters typically dominate risk and return.  At the portfolio level, idiosyncratic issues are much less important.  Otherwise said, the important drivers of portfolio success are factor exposures: large cap vs. mid- or small cap, growth vs. value, low volatility vs. high volatility, high quality vs. low quality, and so on.  The names of the stocks matter much less than their collective exposure to these factors.  More often than not, in fact, we find that stock selection actually subtracts value, even from successful active portfolios.

Finally, view performance as a byproduct, not as an end in itself.  This is perhaps the most difficult adjustment required in the active mindset; obviously investors put money in the stock market because they expect it to generate better performance than bonds or cash.  So it has done over the long run, but agnosticism is generally in order when it comes to short-run results.  This is particularly true for factor indices, which enable investors to indicize active strategies.  Just as no active manager outperforms all the time, neither does any factor.  For example, low volatility indices, over time, have outperformed quite handsomely — but that is not the measure of their success.  Their success is judged by their having mitigated the fluctuations in their parent indices – which, in rising markets, can lead to lagging results.  In cases such as this, underperformance is not an indication of failure.  It may simply mean that a factor index is doing what it was designed to do.

These three precepts — defaulting to passive, approaching portfolios as attributes, and viewing performance as a byproduct — go a long way to defining an index investor’s view of the world.

In June 2019, Reuters published that green bond issuance for the year had surpassed USD 100 billion,[1] which extolled a milestone of the first time the green bond issuance pace had reached the USD 100 billion mark by the first half of the year. Issuance could be on track to double by the end of the year. Since the end of June, USD 90 billion more has been issued, bringing the 2019 total to USD 212 billion in issuance as of October 2019.

When looking at country of issuance, the U.S. led national rankings, followed by France, China, Germany, and the Netherlands. 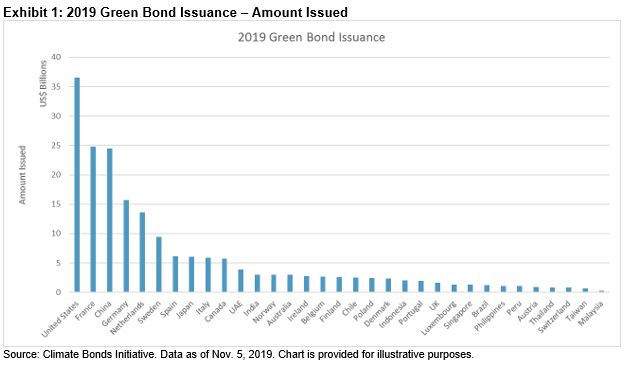 Derived from the same data, though organized for index use, the S&P Green Bond Index contains 5,774 bonds with a market value of USD 546 billion. Originally launched in 2014, the S&P Green Bond Index is a broad market index that is designed to measure the performance of green bonds regardless of size, coupon, or structure. The index and its subindices have grown in size as issuance has continued to increase for the green bond market. 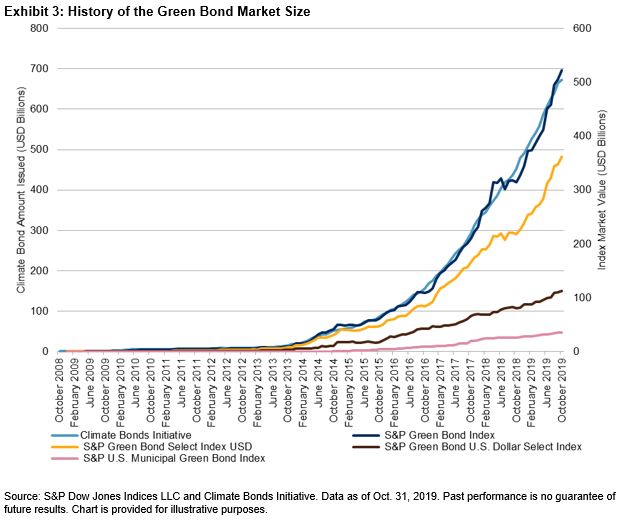 Like the green bond market, the top countries in the S&P Green Bond Index are the U.S., France, and China, which make up 17%, 14%, and 9% of the index’s weight, respectively. The ratings within the index have transitioned from the historic AAA of supranational, which in the past consisted of heavy issuers of green bonds, to its current breakdown, seen in Exhibits 3 & 4. 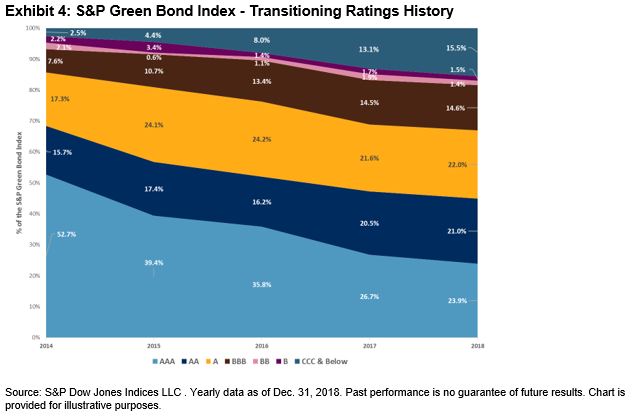 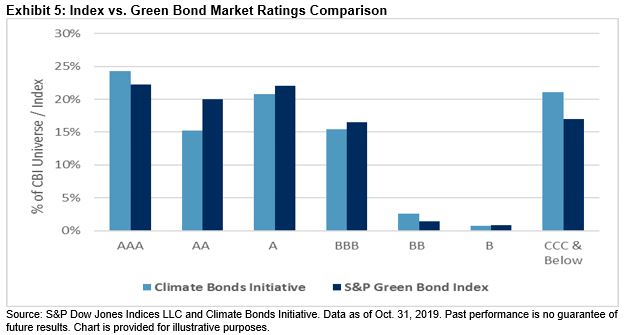 The makeup of the issuers also shifted from supranational and short duration to longer-dated and larger sovereign and corporate bonds. The weighted average maturity of the S&P Green Bond Index went from 2.5 years in 2012 to 9.5 years in 2019, with a modified duration of 6.5 years. 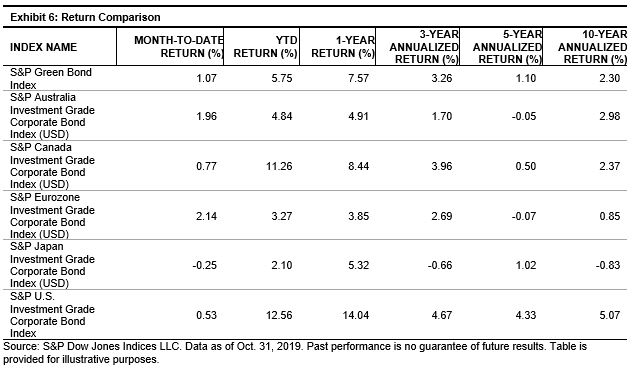 Currently, the green bond market is small when compared to the overall fixed income market. Issuance continues to increase along with the diversity of issuers. The existence of the green bond market and the S&P Green Bond Index is a start, but if capital markets are to meet the needs of the environment and reversing the damages of climate change, the scale of investment capital would have to be exponentially larger in order to meet the challenge.

How Australian Dividend Investors Could Benefit from the Core-Satellite Approach

The core-satellite approach splits a portfolio into two parts: the main part, called the core, and a much smaller portion, called the satellite. The core generally consists of “boring” but steady long-term performance (often index funds tracking market portfolios), while the satellite can be anything that could complement the core with risk diversification, outperformance potential, or both. This way, you could have the benefits of a diversified portfolio, an opportunity to outperform the market, and the advantage of lower management and transaction costs.

For income-seeking investors with core holdings of market portfolios like the S&P 500 and the S&P/ASX 300, the S&P/ASX 300 Shareholder Yield Index and the S&P 500 Low Volatility High Dividend Index can be compelling satellite options for their attractive dividend yield and high active share.[1]

Since January 2015, the active share of the S&P/ASX 300 Shareholder Yield Index against the S&P/ASX 200 averaged 74%. For the S&P 500 Low Volatility High Dividend Index versus its benchmark, the number was 85%. This means that both indices could be more “active” than many active yield-focused funds offered in Australia and can complement a core index holding in an investor’s portfolio.

Implementing the Core-Satellite Approach with the Two Dividend Indices

If your core is the S&P/ASX 300 or the S&P 500, how would your portfolio look like if you moved some capital to the corresponding dividend index? Exhibits 2 and 3, which depict the risk/return profiles of 11 combinations of core and satellite, provide a visual illustration of the effects. 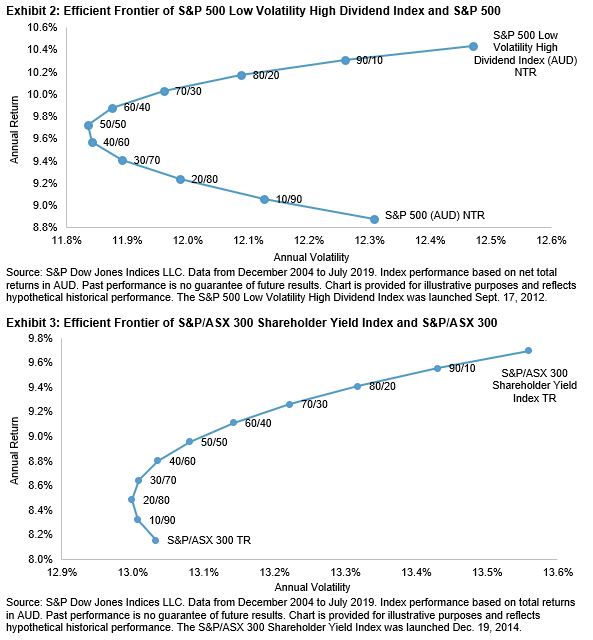 The curves in Exhibits 2 and 3 reveal how diversification improves a portfolio’s risk/return profile, or what is called the “efficiency” of portfolios. It could be used as a guide to help investors implement the core-satellite approach.

The EU Climate Transition and Paris-Aligned Benchmarks: A New Paradigm

Since the release of the Intergovernmental Panel on Climate Change (IPCC) report[1] in October 2018, there has been growing investor interest in 1.5οC scenario-aligned portfolios. In May 2018, the EU announced its action plan for sustainable finance, which included proposals to create two new carbon transition benchmarks (EU Climate Transition [CTB] and Paris-aligned Benchmarks [PAB]). The EU appointed a technical expert group (TEG) to report on the minimum standards for new benchmarks. On Sept. 30, 2019,[2] the TEG released its final report on benchmarks and benchmark ESG disclosures. The report provides information regarding the preparation of the delegated acts by the European Commission, which will be published in draft form before the end of the year. What is the likely effect of the TEG’s proposals on indices?

Consistent tracking error over time is commonplace for ESG indices, due to their design. However, new EU proposals on climate benchmarks[2] make the CTB and PAB active risk dependent on the parent index’s ability to meet their 7% year-on-year decarbonization trajectory (which is the linear decarbonization required for a 1.5οC scenario), due to absolute carbon intensity reductions rather than relative.[3] Therefore, tracking error will be driven by the parent index, which is outside of the control of CTB or PAB. This is not good or bad, in essence, but is a new paradigm for investors if they want to invest in CTB- or PAB-aligned products.

Exhibit 1 shows future PAB and CTB trajectories, as well as a range of possible trajectories from 7% decarbonization and 3% carbonization of the index (the first chart). Here it can be seen how much market trajectory divergence from a 1.5οC scenario could affect the index’s future Weighted Average Carbon Intensity (WACI). The second chart in Exhibit 1 shows the potential future carbon intensity reduction required to align with the TEG’s proposals for the CTB and PAB. 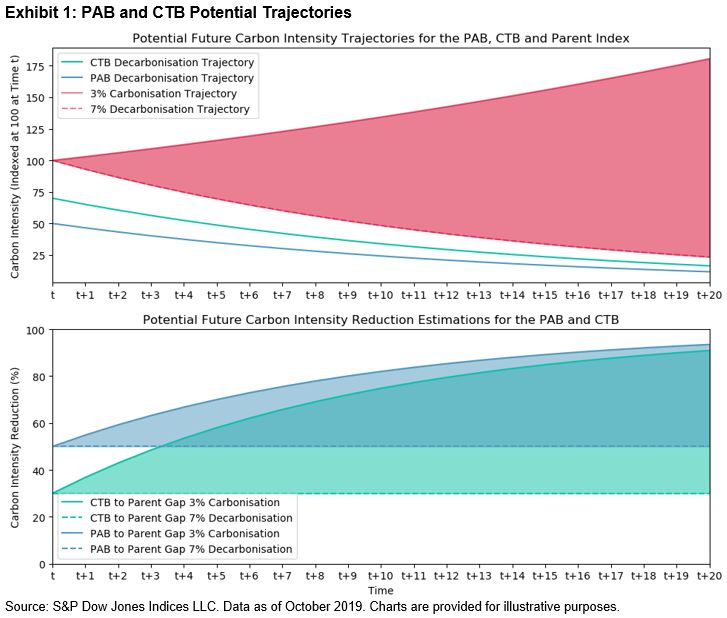 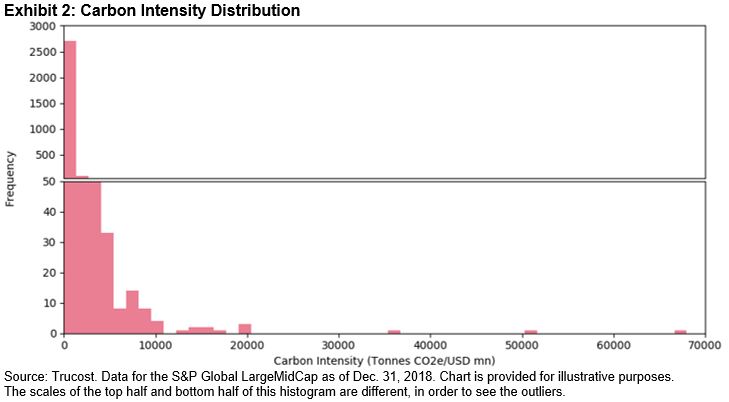 These carbon intensity reductions are the absolute minimum needed to meet the TEGs proposals for CTBs or PABs. Therefore, reduction targets will likely have to be larger than the required reduction to ensure the PAB and CTB have sufficient leeway when weight drift affects the index’s WACI.[4]

In recent years, the S&P Global LargeMidCap’s WACI has trended downward (see Exhibit 3), however, there have been fluctuations.[5] Due to the high concentration in carbon intensity in a few companies, their performance, and therefore weight in market-cap-weighted indices, is a large driver of an index’s WACI. Therefore, if the most carbon-intensive companies outperform, the WACI will increase significantly.

Overall, there are various carbon intensity trajectories market-cap-weighted indices can take, which would affect the level of active share required of indices to meet the TEG’s propsals for CTBs and PABs. As the proposed requirements of carbon reduction from the parent index increase, the active risk taken could rise expotentially due to the high positive skew in the distribution of corporates carbon intensity. This absolute emission target, as opposed to a relative emission reduction, is a new paradigm for index design.

[3] The current norm for indices is to seek a relative change from the benchmark. However, under the proposals of the TEG, the index provider shall set their 30 % (for the CTB) and 50% (for the PAB) reduction anchor, then set the trajectory line for the decarbonization of the CTB and PAB. As a result, the CTB and PAB make an absolute level of reduction, rather than a relative one.

[4] The WACI has to be calculated using average weights over the period, according to the TEG’s proposals.