The performance of U.S. equity factors during Q2 was lackluster, with most underperforming the S&P 500, as seen in Exhibit 1.  While Minimum Volatility and Low Volatility were notable exceptions, Value, Quality, High Beta, and Momentum all lagged the benchmark – in large part because of their tilt toward smaller companies.  Since most factor indices are not cap-weighted, their out- or under-performance tends to parallel that of the equal-weighted 500. 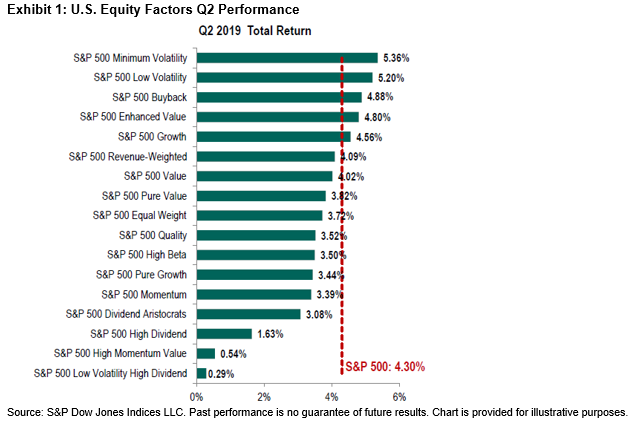 Equal Weight is a particularly good illustration of the small-size effect, since it holds the same stocks as the cap-weighted S&P 500.  Exhibit 2’s factor exposure chart makes Equal Weight’s small cap tilt clear.  Given the outperformance of larger-cap stocks during the quarter, Equal Weight performance was understandably disadvantaged. 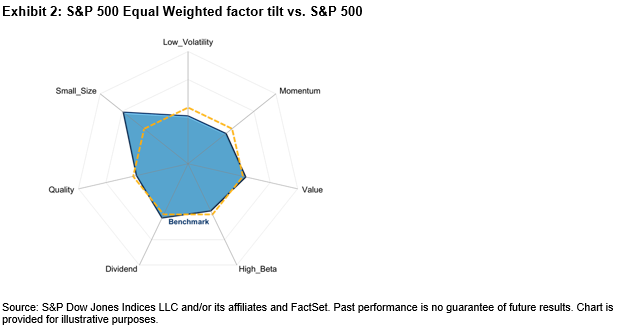 Exhibit 3 demonstrates that larger-cap stocks dominated within most sectors of the S&P 500, with a particularly noticeable effect in the Consumer Discretionary and Info Tech sectors.  Seven out of eleven equal weight sectors underperformed their cap-weighted counterparts. 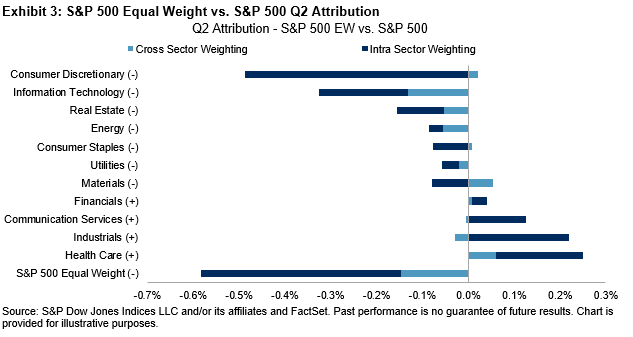 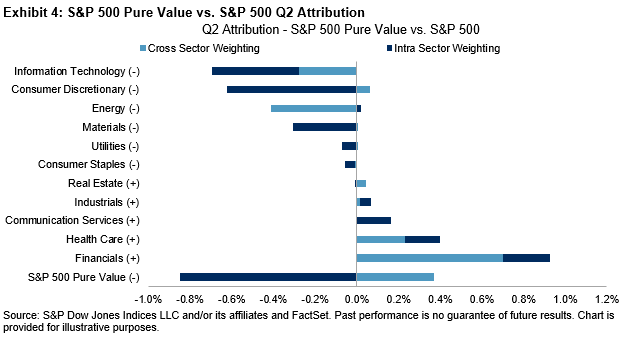 Active managers are not immune to these effects.  Our SPIVA database shows that active management tends to be particularly challenged in periods when the largest stocks outperform, and when Low Volatility outperforms.  If I were a betting woman, I would not bet on active manager outperformance when our next SPIVA report appears.

Mark Carney’s statement underpins the sentiment of the investment community, where environmental, social, and governance (ESG) considerations have entered the forefront of investors’ priorities.

Whether factor indices have ESG principles integrated or not, understanding a factor’s influence on ESG characteristics, such as the benefits of quality, can be advantageous.

Exhibit 1 presents a heat map visualizing the S&P Factor Indices’ ESG exposures. This can be interpreted as red representing poor performance, yellow as middle, and green as strong, relative to the other indices. 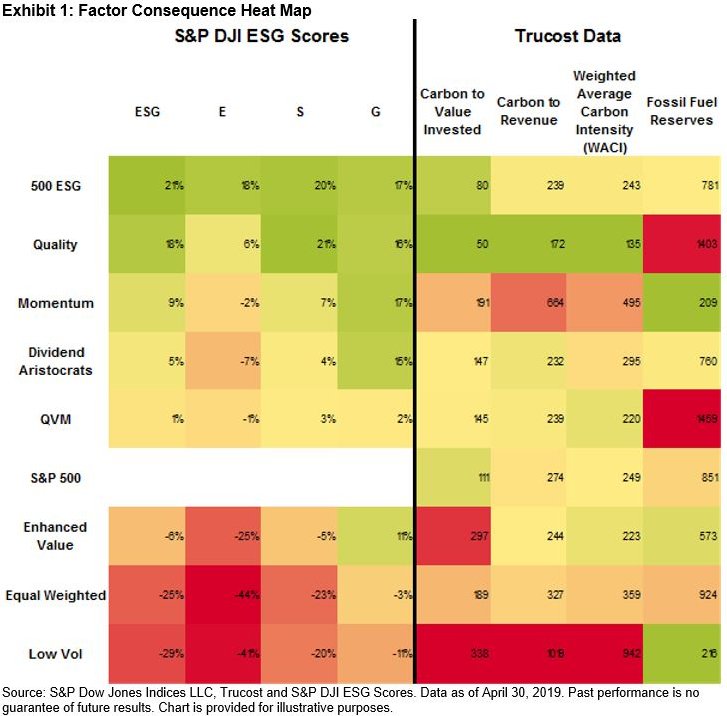 Using S&P DJI ESG Scores, ESG improvements from the parent index were calculated as a percentage of possible ESG improvement if the total index weight were to be placed in the highest ESG-scoring stock (hence, there is no data for the S&P 500® as it is the benchmark for the factor indices analyzed). The S&P DJI ESG Scores are based on underlying data from SAM’s award-winning Corporate Sustainability Assessment combined with an S&P DJI methodology of how underlying data is treated and aggregated.[1]

The “ESG,” “E,” “S,” and “G” columns in Exhibit 1 refer to the improvement in the ESG, environmental, social, and governance levels of the S&P DJI ESG Scores, while the other columns refer to various Trucost carbon footprinting methods.

Exhibit 1 illustrates that factor exposures can have a strong influence on ESG scores. 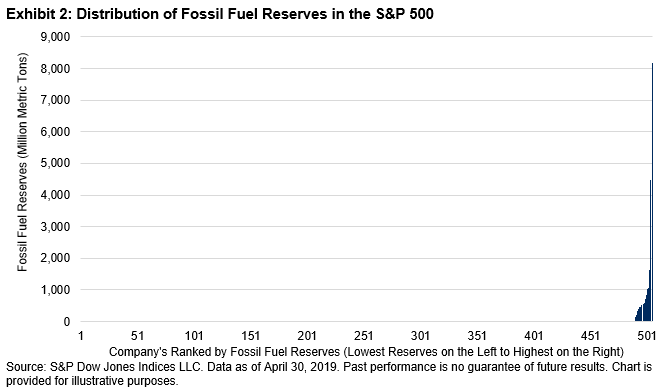 Alternately, the S&P 500 Low Volatility Index shows the poorest ESG characteristics, with a 29% ESG reduction, largely driven by a 41% environmental reduction, while also falling short on social and governance factors. These S&P DJI ESG Scores[2] are backed by poor carbon to value, carbon to revenue, and weighted average carbon intensity figures, which were the worst performers of the factor indices analyzed. The low carbon scores are unsurprising, considering the large number of Utilities companies with low volatility characteristics. Exhibit 3 illustrates the distribution of carbon intensities, heavily skewed as with the fossil fuel reserves. 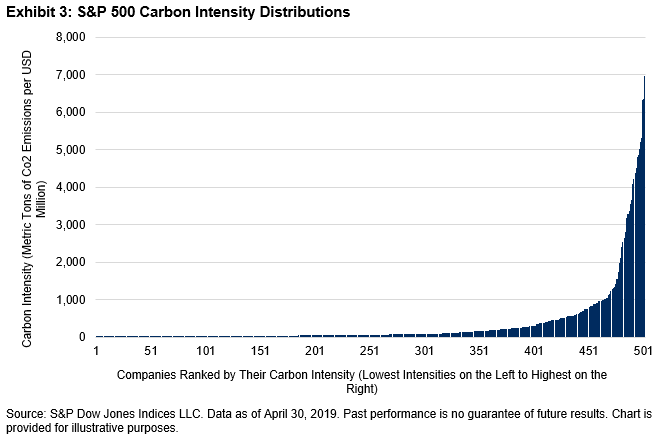 A responsible investor may consider implementing a carbon reduction strategy for a low volatility index or combining ESG with low volatility to gain stronger ESG exposures while still capturing the low volatility risk premia. In the next blog, we’ll see what drives these scores, as well as how constant the sector allocations within factor indices are over time.

The second quarter of 2019 reinforced the upside potential of S&P MARC 5% Excess Return (ER) Index diversification, which compliments traditional risk management benefits. With the equities and fixed income components having good, but not stellar, Q2 performance, we have to look to gold to understand the driver of the S&P MARC 5% (ER) Index’s performance. Gold, as measured by the S&P GSCI Gold, started the quarter primarily in negative territory but turned positive toward the beginning of June and rose significantly on the back of a dovish Fed. 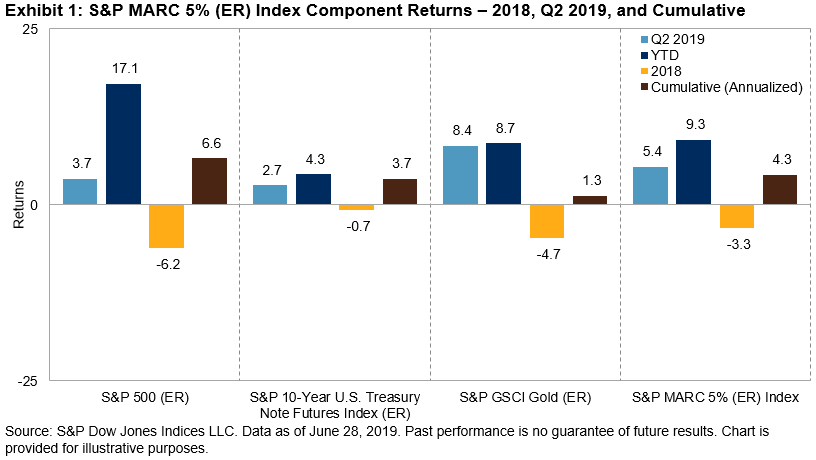 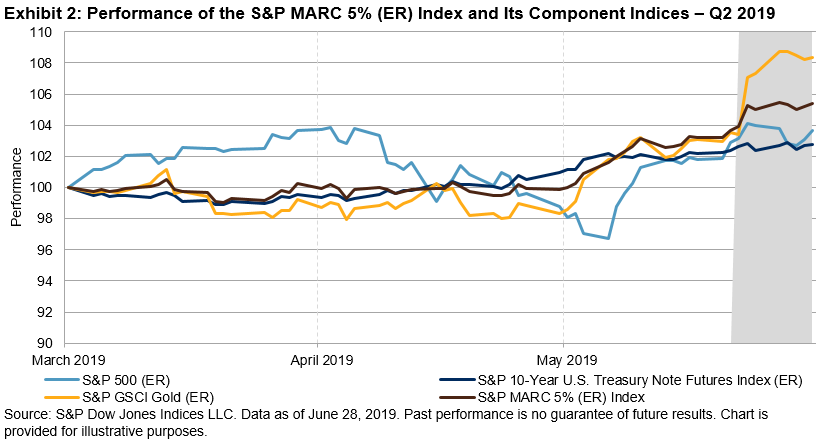 When looking at the relative returns of the components of the S&P MARC 5% (ER) Index versus the index itself, you can observe that the diversification still held in Q2 2019, though the index also managed to capture relatively sizeable shifts in any given asset class. This can best be seen toward the right side of the chart, where the outsized relative performance caused equities and fixed income to underperform the S&P MARC 5% (ER) Index, despite each being positive for the quarter (see Exhibit 3). 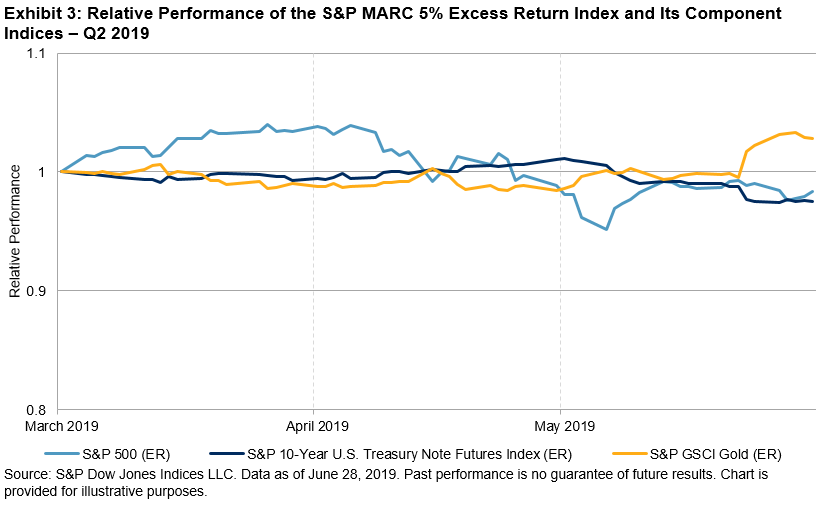 Looking at the rolling 252-day performance for the 63 days in the quarter, we can see that for any of the 252-day periods, the return of the S&P MARC 5% (ER) Index would have been positive despite the inconsistencies in most of its components. It is also worth noting that, because of the diversification of the index, during the past few observation periods ending in June 2019, the S&P MARC 5% (ER) Index also outperformed each of the individual asset classes over the 252-day period. 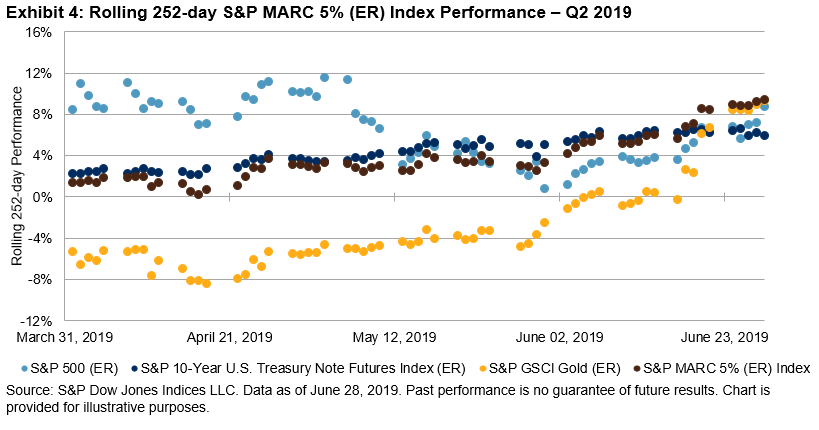 Commodities markets resumed their upward trajectory in June. The S&P GSCI was up 4.4% for the month and up 13.3% YTD. The Dow Jones Commodity Index (DJCI) was up 3.1% in June and up 6.9% YTD, reflecting its lower energy weighting. A recovery in petroleum prices and an impressive rally in gold were the main drivers of the broad commodities indices’ performance over the month.

In the oil markets, bearishness regarding the state of the global economy was tempered by fears regarding a possible disruption of oil exports from the Gulf region and prospects for a renewed production deal from OPEC. Tanker attacks in the Strait of Hormuz and the Gulf of Oman over the course of June undermined global shipping security and escalated the dispute between the U.S. and Iran over its nuclear program. The S&P GSCI Petroleum ended the month up 7.2%. At the start of July, a deal was reached between members of the OPEC Plus group to extend the existing oil output cuts of 1.2 million barrels per day for nine months.

The S&P GSCI Industrial Metals reversed its course from the prior two months, rising 2.0% in June. Over the first six months of the year, the S&P GSCI Nickel rose an impressive 19.1%; the rally was largely attributed to the long-term prospects for the use of nickel in electric vehicles and falling exchange-held inventories, and was in spite of the fact that the well-documented supply gap in the refined nickel market is expected to shrink over the second half of the year. The S&P GSCI Iron Ore moved significantly higher, by 14.9% in June, due to another drop in port inventories and additional Chinese government stimulus. An agreement between Trump and Xi Jinping to restart trade talks following a meeting at the G20 Summit also contributed to the strong performance.

The other metal to record double digit percentage gains was the S&P GSCI Palladium, which jumped 15.7% in June due largely to investor demand and is now close to reaching an all-time high. The S&P GSCI Gold increased 8.0% for the month. The exhilaration that was associated with the strength of the global economy a year ago has been replaced with growing financial market turbulence, a plethora of geopolitical flashpoints, and a string of economic releases that have fallen short of expectations. It would appear that few central banks wish to find themselves on the wrong side of the U.S. Fed, suggesting that lower interest rates are on the horizon. Gold tends to perform well in these circumstances.

The S&P GSCI Agriculture ended the month up only 0.3%, with some of the recent weather-induced exuberance taken out of the grains market on the last day of the month, following the release of the USDA’s Acreage Report. The S&P GSCI Coffee was up 2.2% in June, with prices buoyed by the threat of a cold snap in Brazil, which could pose a threat to crops.

The rollercoaster ride continued in the lean hogs market, with the S&P GSCI Lean Hogs down 10.0% in June. The latest U.S. hogs and pigs report indicates that pig and pork supplies in 2019 will be well above last year’s levels. The June 2019 hog inventory was up 4% year-over-year and the breeding herd expanded by 1%. This is the highest June 1 inventory of all hogs and pigs in the U.S. since estimates began over 50 years ago. At the same time, U.S. pork exports to China have been lackluster due to the ongoing trade spat between the two nations, and despite the devastation caused to the Chinese domestic industry by African swine flu. 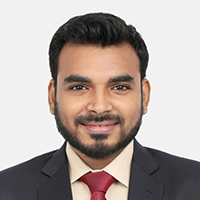 The S&P/ASX 200, widely considered a performance barometer for the Australian equities market, comprises 200 of the most liquid and highest market capitalization stocks listed on the Australian Securities Exchange (ASX). Nevertheless, the performance of this index is not solely influenced by Australian economic activities, but also by global economic conditions, depending on the individual securities’ geographical revenue exposure. As of May 17, 2019, 64% of S&P/ASX 200 members’ revenue was sourced domestically, while 36% of their revenue was exposed to foreign markets such as the U.S., Europe, New Zealand, and China (see Exhibit 1).

Apart from the Utilities sector, where revenue was not exposed to foreign markets, all other sectors were exposed to foreign markets at varying degrees. The Information Technology sector had the highest foreign revenue exposure (63%), followed by Health Care (56%) and Materials (52%). Foreign revenue exposure in the Health Care and Information Technology sectors was dominated by the U.S. and Europe, while foreign revenue in the Materials sector had the highest market exposures to China and the U.S. In contrast, revenue in the Real Estate and Financials sectors was predominantly domestic, with only 13% and 24% coming from foreign markets, respectively (see Exhibit 2). 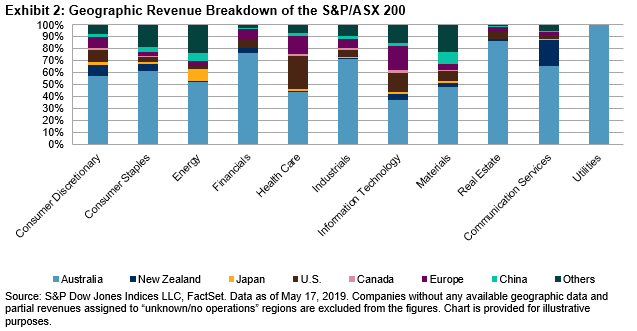 When domestic and international macroeconomic conditions diverge, investors may want to manage the geographical revenue exposure of their portfolios to capture more favorable returns or to lower the risk of macroeconomic shocks. Based on the S&P/ASX 200 Australia Revenue Exposure Index and S&P/ASX 200 Foreign Revenue Exposure Index,[i] which comprise S&P/ASX 200 companies with high domestic and foreign revenue exposures, respectively, we observed that Australian companies with different revenue exposures had short- and long-term performance divergence historically (see Exhibit 3).

In summary, managing geographical revenue exposures for portfolios resulted in significant performance differences in the Australian equities market and was observed in more than just sector allocation differences. Constructing a portfolio based on quantitative revenue exposure measures is an alternative way for investors to implement their active views on macroeconomic conditions. 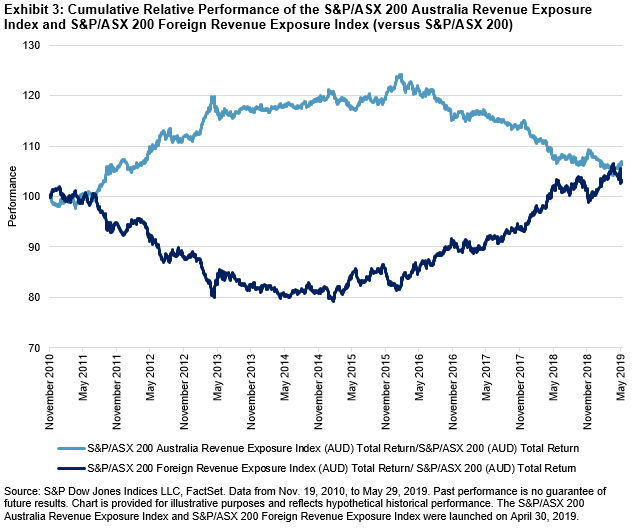 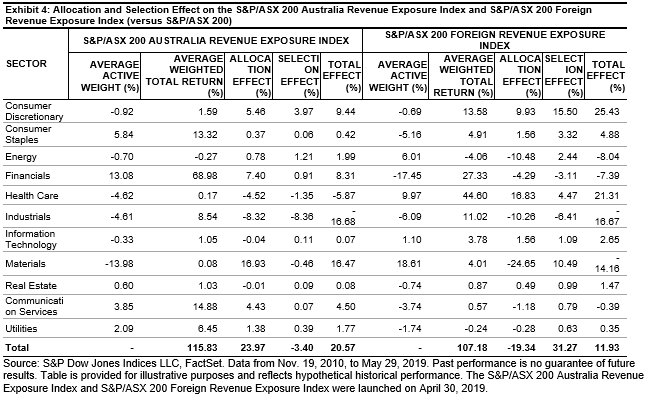