It is that time of year when we look back at the memorable moments that made 2018 so special. In our case, we will look at the Latin American markets to see their development and performance. This past year was particularly exhilarating and terrifying at the same time, similar to the feeling one gets when riding a rollercoaster. The ups and downs make you sick, you scream for help, you want to get off—but once you’re on it, there is nothing you can do but ride the monster. After it is all over and despite the aggravation and fear, you cannot wait to get back on it. Welcome to the Latin American rollercoaster.

The last quarter of 2018 was particularly horrifying for most global markets, with the S&P 500® giving back nearly 14%. The S&P Europe 350® and the S&P/TOPIX 150, which seeks to measure Japanese blue chip companies, lost 13% and 15%, respectively. This resulted in global returns of nearly -13% for the quarter, as reflected by the S&P Global 1200, which is designed to measure the 1,200 most important stocks in the world. 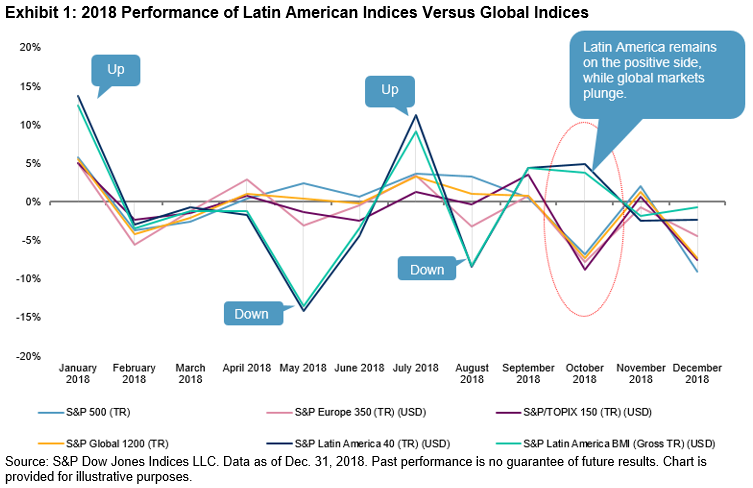 What fueled the Latin American rollercoaster of 2018? The region underwent some of the most important changes it had seen in many years. In 2018, there were major presidential elections in Brazil, Colombia, and Mexico, and new presidents took office in Chile (following the 2017 elections) and Peru (following the resignation of the recently elected president). Chile and Colombia elected moderate candidates, while Brazil and Mexico chose different administrations from the ones that had governed those countries previously. The potential changes brought great uncertainty to the region and, with it, great volatility to the markets.

While most countries ended in the red for the quarter, Brazil was the shining star of the region, with the S&P Brazil BMI returning nearly 15% in U.S. dollars—no other country in Latin America came anywhere near this return. In U.S. dollar terms, Mexico and Colombia had the worst returns. The S&P/BMV IPC was down nearly 20%, and the S&P Colombia Select Index was down almost 18%. While Chile and Peru also had negative returns for the quarter, their returns did not drop as much as the two other countries. The S&P Chile LargeMidCap, a proxy for the S&P/CLX IPSA, returned -3.4% in U.S. dollars, and the S&P/BVL Peru Select Index posted -2%. In their respective local currencies, the indices had better performance.

Looking at longer periods, local investors from Argentina fared the best. Peruvian and Brazilian investors were somewhat behind but still held on to significant returns. Argentina generated returns of over 51% and 48% for the three- and five-year periods, respectively. However, the large devaluation of the Argentine peso against the U.S. dollar and the high inflation rates diminish the value of the returns. Following Brazil’s election of a “market-friendly” presidential candidate, the country entered into a rally that sustained the gains of the three- and five-year periods. The S&P Brazil BMI showed U.S. dollar returns of 27% and 11%, respectively. Peruvian investors also managed to hold on to their gains for these periods, with the S&P/BVL Peru Select Index reporting 27% and 8% in local currency, respectively. Chile did well for both periods, while Colombia had mixed results, with a positive return for the three-year period but a nearly flat local currency return for the five-year period.

In 2018, Mexico struggled to hang on to past gains. The uncertainties of the new government’s policies, the renegotiation of the North American Free Trade Agreement (NAFTA), and the fall of the Mexican peso brought uncertainty and volatility. The market is still struggling to find its footing, although during the first two weeks of 2019 (Jan. 1-14, 2019), the S&P/BMV IPC displayed a positive upturn of nearly 5%.

This new year has so much to look forward to. Latin American is poised for great changes with all these new leaders. It will be interesting to see the direction they take their countries and the outcomes and opportunities this will bring to local and international investors.