A similar trend has occurred within sectors.  During the first nine months of 2018, Consumer Discretionary and Info Tech dominated performance, as seen in Exhibit 1. 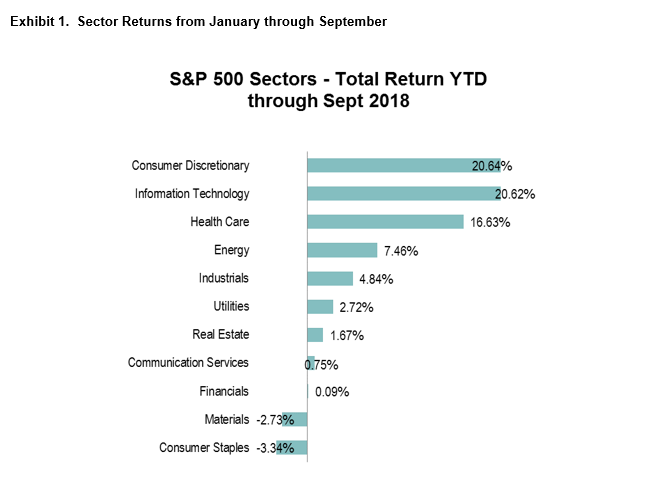 For the first two weeks of October, however, Exhibit 2 shows that defensive sectors such as Utilities and Consumer Staples outperformed former leaders such as Technology and Consumer Discretionary. The reversal of sectoral fortunes parallels the reversal in factor index performance. 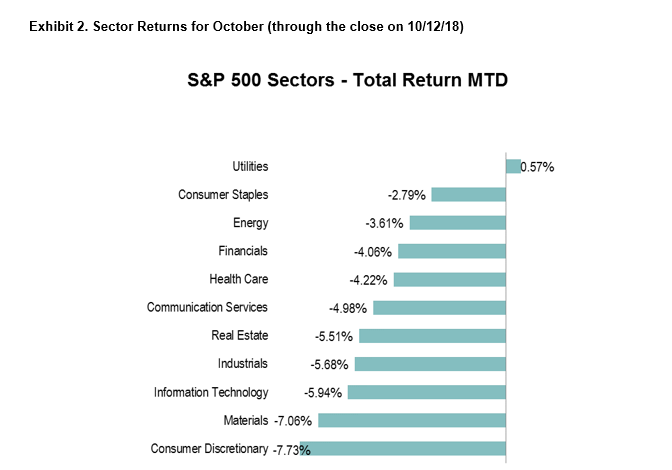 As readers of our U.S. Sector Dashboard will realize, this is not coincidental.  Consumer Discretionary and Info Tech have a strong tilt to Momentum, while Utilities and Consumer Staples are tilted towards defensive factors such as Low Volatility and Value. 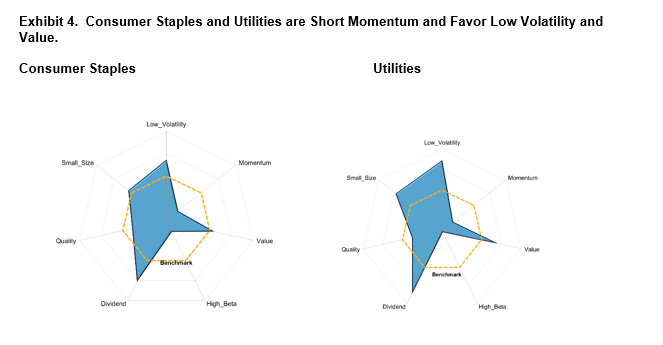 Sectors and factors interact in characteristic or typical ways. Investors can look at the world through either lens. Their perception of reality will be improved if they use both.

Empirical evidence shows that factors tend to earn higher risk-adjusted returns than the broad market over a long-term investment horizon; however, their returns can be rather cyclical in near- to mid-term horizons. Much like asset classes, depending on the market environment, some factors outperform and some underperform for extended periods. Using annualized 1-, 3-, 5-, and 10-year returns of various factor strategies, Exhibit 1 highlights the cyclical nature of factor returns. 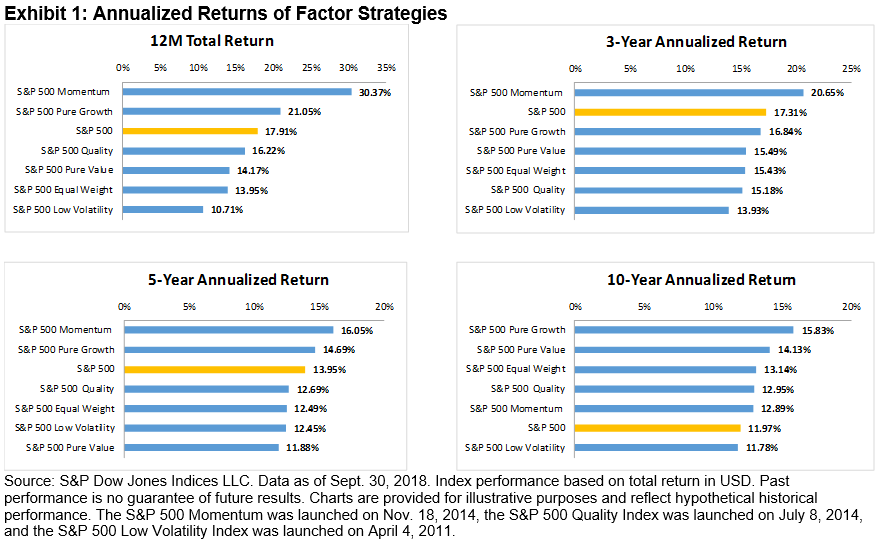 While factors returns are cyclical, it is still possible to establish a generalized pattern of returns through various market environments. Using the monthly returns from June 30, 1995, through Sept. 30, 2018, we compared large-cap value, quality, momentum, low volatility, and size (represented by the S&P 500 Equal Weight Index) strategies against the S&P 500 (see Exhibit 2). We computed their hit rate (in percentage) in up, down, and all market periods[1]. In addition, we calculated the average monthly excess returns of the factor strategies in those three periods. 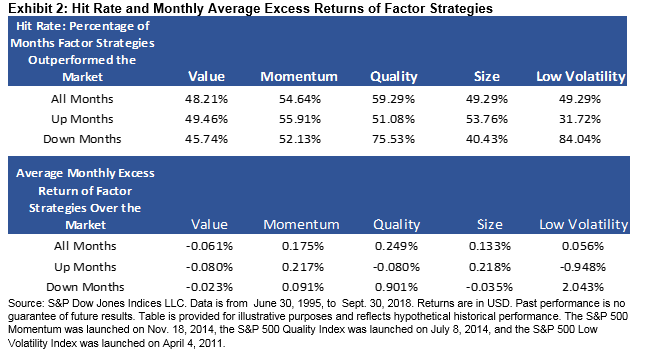 We can see that in general, the momentum and quality factors did better than the benchmark in all market periods. In up markets, the quality, momentum, and size factors had above average hit rates (> 50%). In declining markets, factors such as quality and low volatility stand out clearly, with hit rates above 75%. In other words, out of the 280 months that we studied, the S&P 500 had negative returns in 94 months. Of those months, the S&P 500 Low Volatility Index and the S&P 500 Quality Index outperformed over 75% of the time.

In addition, average monthly excess return figures show the magnitude of out- and underperformance by factors in different market environments. In general, during up markets, excess monthly returns of factors such as low volatility, quality, and value tended to be negative. However, a different picture emerged when markets declined, with the low volatility and quality factors posting average monthly excess returns of 2.04% and 0.91%, respectively. Hence, factors such as quality and low volatility generally have defensive properties with asymmetric payoffs, especially for the latter.

Therefore, one can group factors into two camps—return enhancing and risk reducing—with both offering higher risk-adjusted returns than the market over the long run. The momentum factor can potentially offer higher returns than the market in an upward-trending market. Conversely, low volatility and quality offer a higher degree of downside protection while providing limited upside participation.

For more discussion on playing defense and offense with factors, tune into our webinar on Oct. 17, 2018. Please click here to register.

The International Monetary Fund (IMF) recently released its World Economic Outlook, October 2018, with estimated global trade tension scenario impacts on GDP.  Overall, the IMF states that recent tariffs will hurt GDP and that additional tariffs will weaken it further.  In the long term, according to the IMF’s scenario analysis (on p. 21,) the U.S. GDP will be 0.9% lower and China’s GDP will be 0.6% lower as a result from the trade tensions.  However, in 2019, the disruption caused by an escalation of trade restrictions could be particularly large with GDP losses of more than 0.9% in the U.S. and over 1.6% in China.

Based on the IMF estimates and the historical sensitivity of stock markets to GDP growth, if the trade tensions escalate, some countries may be impacted more than others.  This can be measured globally by starting with the total U.S. dollar market capitalization of the S&P Global BMI (Broad Market Index) by country.  The United States is the largest in the world, representing 53.5% of the total market cap worth $27.8 trillion as of Oct. 11, 2018.  South Korea is the smallest country of the top ten by size, and has an index weight of 1.7% that includes about $902 billion.  In total, the top ten biggest countries by market value include 86% of the world’s $52 trillion total market value.

After measuring the historical stock market sensitivity of the ten biggest countries in the S&P Global BMI to each U.S. and China GDP growth, the decreased GDP as estimated by the IMF can be applied as one possible scenario to understand how stock market values may be reduced.  In total, if the U.S. and China GDP were to drop in 2019 by 0.9% and 1.6%, respectively (as estimated in a five-layer simulation by the IMF,) the global stock market value may lose $2.17 trillion or 4.9% of its value from the top ten countries under this scenario.  A total market value loss of about $1.49 trillion and $687 billion, all else equal, may be attributed to the GDP reduction in the U.S. and China, respectively, in this case.  While the total dollar market value loss in the U.S. would be biggest with a magnitude of $1.39 trillion under this scenario, the greatest percentage declines in market value might impact South Korea and China more with respective 12.4% and 8.2% losses.