The Growth of Emerging ASEAN

The Growth of Emerging ASEAN

The Association of Southeast Asian Nations (ASEAN) region is well known for its growth potential among market participants who seek to diversify their exposure within emerging markets. ASEAN originally consisted of Indonesia, Malaysia, Philippines, Singapore, and Thailand. It then expanded to include Brunei, Cambodia, Laos, Myanmar, and Vietnam. Within ASEAN, the World Bank classifies Singapore and Brunei in the high-income category, while the others fall under the middle-income group. For emerging markets exposure, middle-income markets with relatively higher growth and a sizable GDP generally have an attractive diversification benefit. Within the middle-income ASEAN markets, the GDPs of Indonesia, Malaysia, Philippines, Thailand, and Vietnam were well over USD 100 billion in 2009 and have been growing steadily (see Exhibit 1). Let’s take a closer look at the characteristics of these five markets.

The global competitiveness index (which determines the level of productivity, the state of public institutions, and the technical conditions) of these five markets has either remained stable or improved since 2008-2009 (see Exhibit 2). An improvement in rank points to a favorable business and political environment in relation to other markets.

The market capitalization of the listed domestic companies as a percentage of GDP has been growing steadily and was more than 50% for all the markets in 2017 (see Exhibit 3). The growth of the stock markets kept pace with the growth in the GDPs of these markets, indicating a balanced development of the public market in relation to the overall capital market.

Brazil, Russia, India, China, and South Africa (BRICS) make up another standard group of emerging markets that may provide diversification benefits. The emerging ASEAN markets had no more than 70% correlation with individual BRICS markets (see Exhibit 4), demonstrating the possible diversification benefit from treating it as a separate asset class.

Based on these observations, it’s no surprise that market participants looking for growth potential and diversification have shown increased interest in emerging ASEAN markets.

Thirty-five years ago, on July 1, 1983, Cboe® launched SEC-regulated S&P 500® (SPX) index options with posted volume of 350 contracts. Since 1983 there has been tremendous growth in SPX options volume, as many individual and institutional investors now use the contracts for purposes such as portfolio management, hedging, and income generation.

Below are five charts that related to the growth in use of and interest in S&P 500 options.

Average daily volume for the SPX options grew from 111 contracts in its launch year of 1983 to 1.44 million contracts in the first half of 2018, as more fund managers now use SPX options for portfolio management. 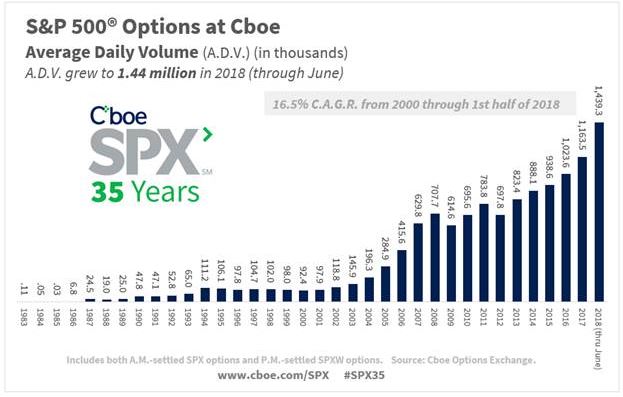 CHART #2 – CAPACITY AND GROWTH IN NOTIONAL VALUE OF DAILY VOLUME

When institutional investors are considering risk management tools, a key issue often raised concerns market capacity – does the market have the capacity to handle large-sized trades? One metric that can be helpful in answering this question is the notional value of average daily volume. As shown in chart #2 below, estimates for the notional value of daily volume for Cboe’s S&P 500 options have grown from $12 billion in 2002 to $390 billion in the first half of 2018. A number of developments facilitated the growth in chart #2, including the introduction of Cboe’s BXM, BXMD, and PUT benchmark indexes, papers by Ibbotson Associates, Wilshire, Callan, Blackrock, and Keith Black and Professor Ed Szado, and the launches of SPXW weekly options with expirations on Mondays, Wednesdays and Fridays. 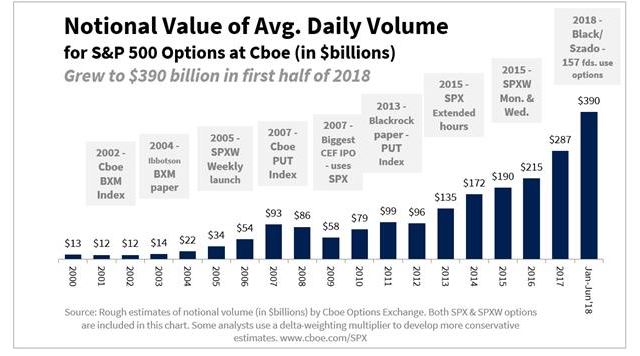 Chart #6 shows the ten dates with the biggest volume for the S&P 500 options. Five of the dates occurred in the first half of 2018. On many of the dates, there was anxiety or volatility in worldwide financial markets, and portfolio managers worked to adjust their equity exposures. 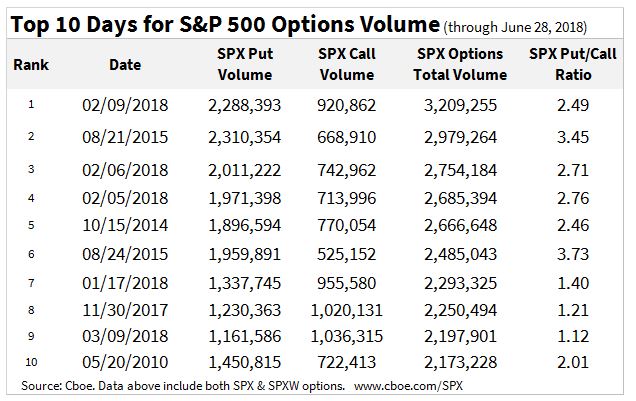 A 2018 study by Keith Black and Professor Ed Szado found that the number of ’40 Act funds (including mutual funds, closed-end funds and ETFs) that focused on use of options grew from ten funds in 2000 to 157 funds in 2017. Key findings of the study include: 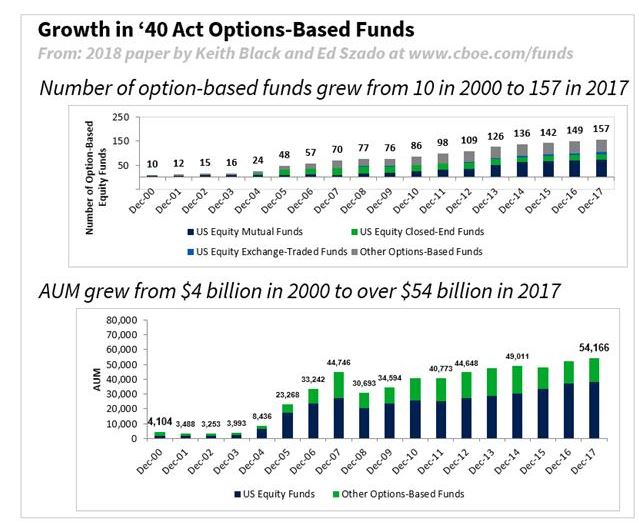 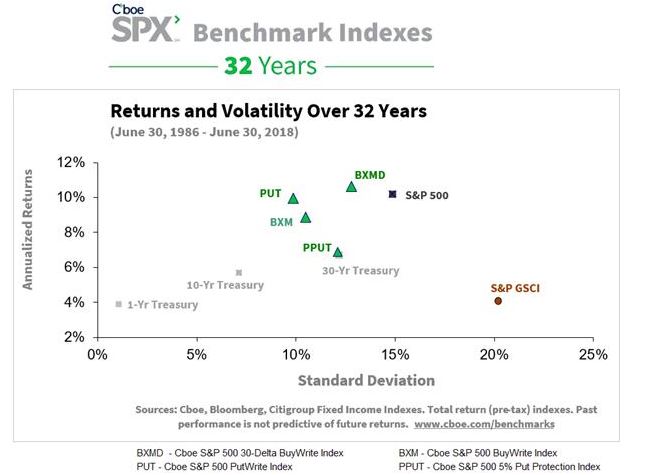 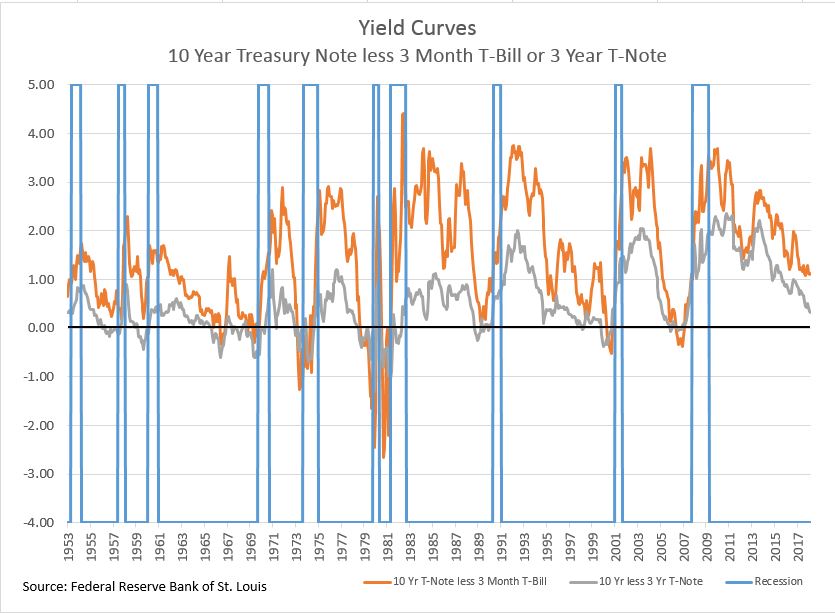 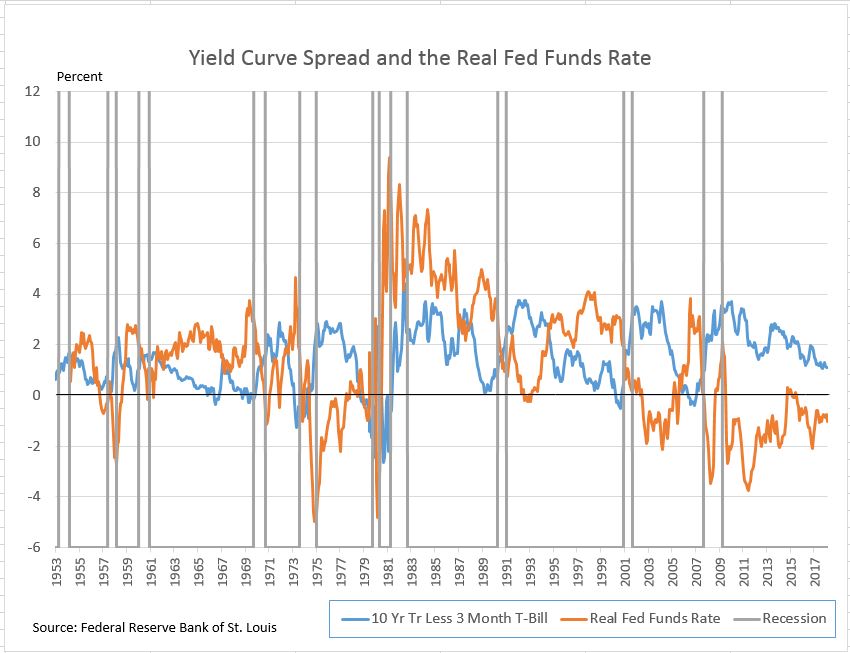 This week I am participating in a retirement panel at the University of Chicago Booth School of Business with key thought leaders from the Plan Sponsor Council of America, the Employee Benefits Research Institute and S&P Dow Jones Indices.  The panel, moderated by my good friend Jody Strakosch, creator of one of the first DC retirement income products, will focus on applying goals-based investing to default investments in DC plans.

In this blog, I discuss my thoughts on the impact of one’s human capital—the present value of lifetime earnings—on retirement plan design. Bob Merton, Bill Samuelson, and I were the first theorists to rigorously model this factor in our 1992 paper entitled Labor Supply Flexibility and Portfolio Choice in a Life-Cycle Model, (Journal of Economic Dynamics and Control, 1992). That paper influenced all subsequent theoretical and practical discussions on the topic.

The key insights were the following:  First, the ultimate objective is to save enough during one’s working years to maintain a standard of living in old age after human capital is exhausted.  Second, the optimal fraction of one’s retirement portfolio allocated to equities depends on the amount of remaining human capital (age) and equity exposure through one’s job.  For example, the human capital for a tenured professor is less risky than that of a worker in a cyclical industry.  The ability to adjust one’s age of retirement is a key factor in the optimal allocation to equities during the working years. In general, the greater the market-risk exposure of one’s job, the lower the fraction to invest in equities.

Since default investments tend to be designed for all workers during all phases of retirement planning we must seek to accumulate enough retirement assets and manage market risk exposure to achieve a target level of income in retirement.  When we are young, say right out of college, most of us have a small amount of financial capital (potentially negative if we still have education debt), however over time we gain financial capital by saving as we enter our peak earning years.  Therefore, based on this assumption, lifecycle asset allocation should evolve over time, potentially from a high allocation to equities to a portfolio that produces a reliable stream of inflation-proof income.

For more on this subject, I recommend other blogs addressing retirement income, such as the recent post by my fellow panelist, Jodie Gunzberg of S&P Dow Jones Indices: https://www.indexologyblog.com/2018/04/19/standard-benchmarks-extend-standard-of-living-through-retirement/.  If we adopt the mantra that income is the outcome, goals-based investing is the investment approach that helps our industry design the right default solutions for all workers, at all times.

Q2 2018 showed that volatility is king in Latin America. The first quarter saw strong returns for the region, with Mexico lagging. In the second quarter, we saw a practical wipeout of all gains for the year and a return to negative territory for Latin America. Recent presidential elections in Mexico and Colombia, as well as upcoming elections in Brazil brought economic uncertainty. Brazil, the largest market in the region, had a significantly tough second quarter. During this period, the country saw great currency depreciation, climbing inflation rates, as well as fiscal and political challenges that largely contributed to the region’s plunge. For the quarter, the S&P Brazil BMI was down 26% in U.S. dollar terms, while the regional S&P Latin America BMI and S&P Latin America 40 were down 18% and 19%, respectively.

It is indisputable that Latin America is going through major upheavals. However, in terms of indices, one of the factors with the biggest impact is currency fluctuations. All the local and regional indices saw sharp drops in performance when looking at U.S. dollar returns, while local investors saw a different picture of the region. A good example is the S&P MILA Pacific Alliance Composite, which excludes Brazil. The broad region of 141 stocks saw returns of -5% in USD for the quarter, but in Chilean and Mexican pesos, the returns were positive, up 2.7% and 2.5%, respectively. In Colombian pesos, the index was flat at 0.1% and in Peruvian nuevos soles, it was down 3%. This shows that, depending on where you are, currency plays an important part in index performance.

Despite the underperformance, there were some strong positive returns, particularly in Mexico and Colombia. The S&P/BMV IPC and S&P Colombia Select displayed strong performance in local currency terms, generating returns of 4.4% and 10.4%, respectively. Other pockets of positive returns were in the energy sector of the Pacific Alliance region,[1] which returned nearly 4% for the quarter and 64% for the year ending June 2018 in U.S. dollar terms.

Volatility is the name of the game in Latin America, and it will be interesting to see what happens next quarter. So far, the presidential elections in Mexico have barely had any impact on the market, and in the first week of July, Brazil has come back to positive territory, but there are many weeks still ahead before the next quarter—stay tuned.